Some 80 people turned out for a press conference on Wednesday for the season launch of the Mardis Cyclistes bike races in Lachine, now in their 37th season. Among the speakers addressing the crowd, Lachine Mayor Claude Dauphin asked that everyone present warmly applaud the Mardis founder and president, Joseph "Tino" Rossi who has led this sporting event since its inception. Dauphin recalled how Rossi started the criterium series in 1978, drawing the start line with chalk.

Rossi recounted how the 2013 champion, Simon Lambert Lemay (Garneau Quebecor) won 6 stage victories last year and established a new course speed record (58:16 over 50 kilometres). Rossi then stunned the crowd to reveal that Lambert-Lemay did all this while suffering from a serious heart condition. 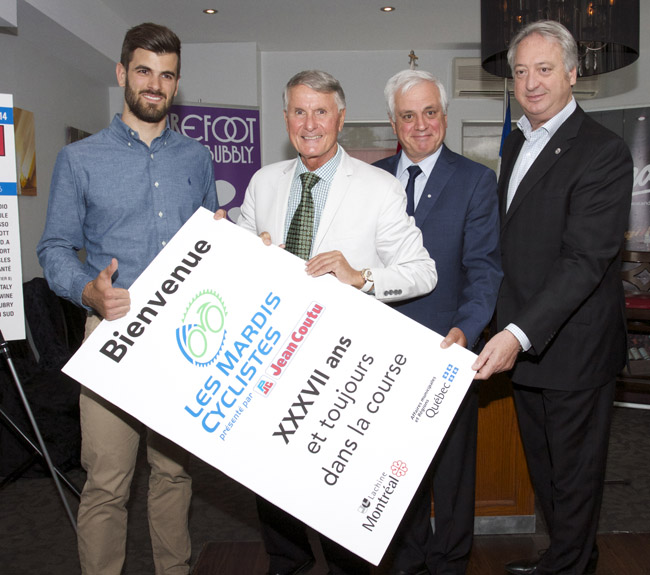 As Rossi himself said, the 10-week series of bike races now attracts teams from all over Quebec and even as far as New Zealand. He pointed out that the bike races would be impossible without the support of sponsors, especially Groupe Jean Coutu, Specialized Quilicot, LaSalle Fiat, Laiterie Chalifoux, Bijouterie Jean-Guy Aubry, and the Caisse populaire (credit union) Desjardins Provost de Lachine and others.

Speaking to the crowd, Lambert-Lemay called the Mardis a "school for bike racing." He looks forward to defending his title this year, but claims to be out of shape. It has been only three weeks since Lambert-Lemay finished his first academic year of studies in osteopathy.

Lambert-Lemay, 23, later explained that he suffered from atrial fibrillation in 2013 and underwent surgery in December 2013 to correct the problem. "It was pretty stressful; some days I couldn't stand up, it depended on the day. Now I do basically whatever I want; the doctor says there are no restrictions."

The list of speakers included the 2014 honorary president, Pierre Beaudin of Desjardins, Louis Barbeau of the Federation quebecoise des sports cyclistes (FQSC), Julie Taillefer of Specialized Canada, and others.

The 10 stages of Tuesday evening races begin this year on June 3rd and finish on August 12th around Parc Lasalle in the Montreal borough of Lachine. The Minimes and Cadets start at 5:30 p.m. followed by the cadets and women's races at 6 p.m. while the senior men start at 6:50 p.m. It is free for spectators to watch the Mardis Cyclistes which are held rain or shine...