BC Bike Race has returned to the fabled North Shore of Vancouver for Stage One presented by BC Ferries with the most attended edition of the ultimate singletrack experience. Without the North Shore the BCBR was missing the one obvious stage that represented a huge part of the history of mountain biking. Racers excitement to be able to race in a place that has been an immeasurable influence for their sport for the past three decades was thick in the air. They weren't disappointed. 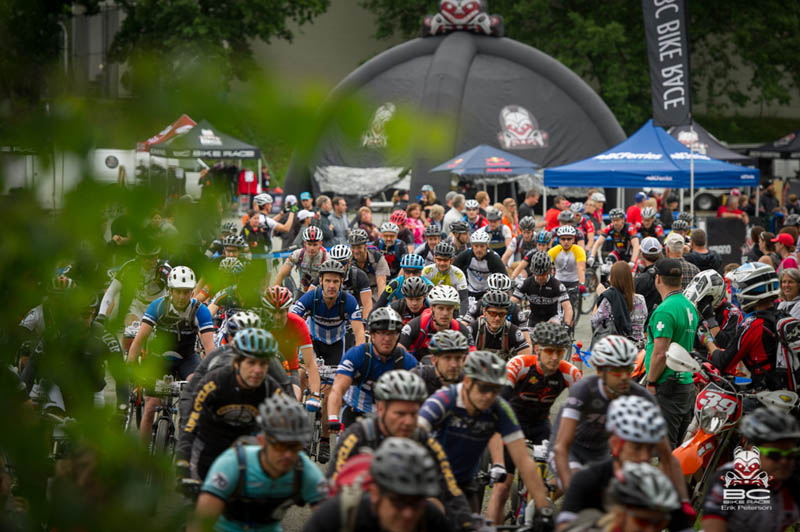 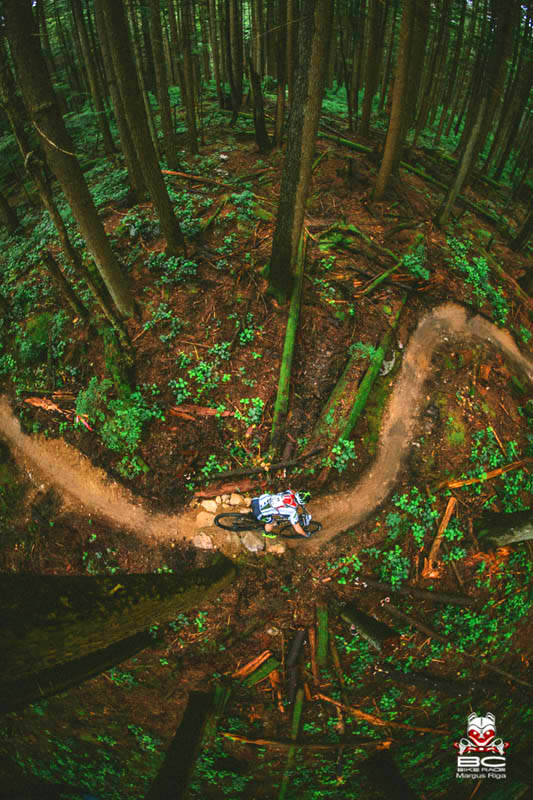 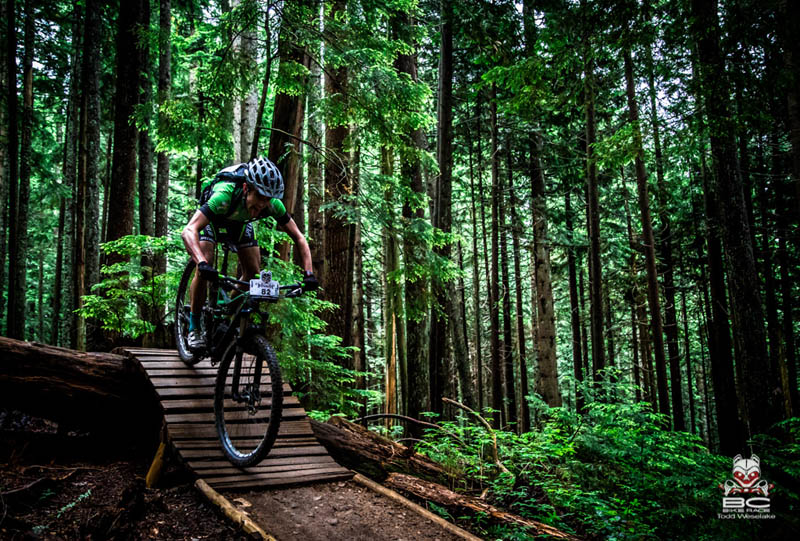 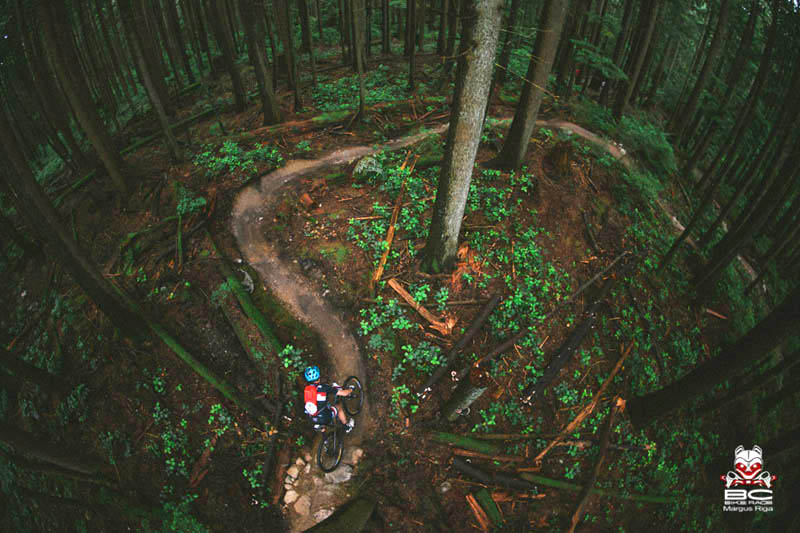 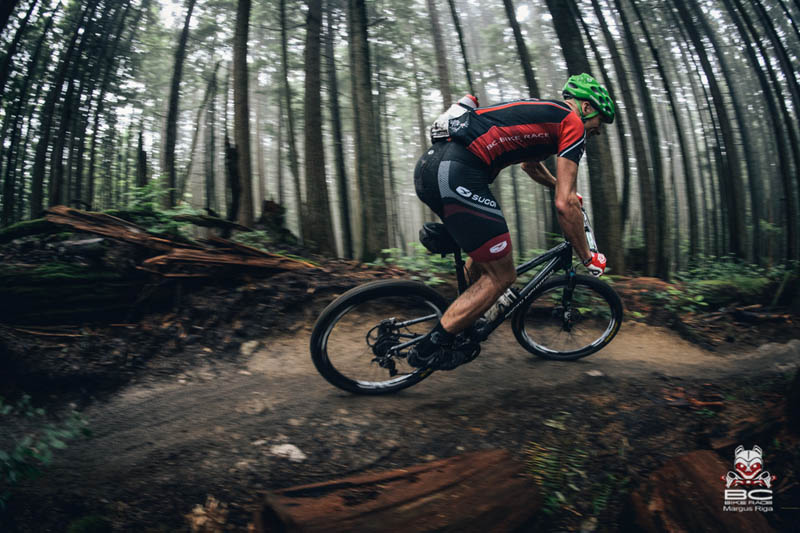 Keeping with it's reputation for being the land where wet trails are part of the lore, the clouds only kept the forest damp while their spirits were lifted by the thrill of riding through trails that mixed high speed flow with, berms, roller-coaster drops, rocks, root clusters, and tight corners.

Every place has a flow unique to its geography and the minds who create the trails. Even with the evolution of trail care each rider got a fresh reminder or an unexpected introduction to what makes the North Shore unique. Here is where free-ride was born, pushing the boundaries of what bikes and bodies can do on the trail. 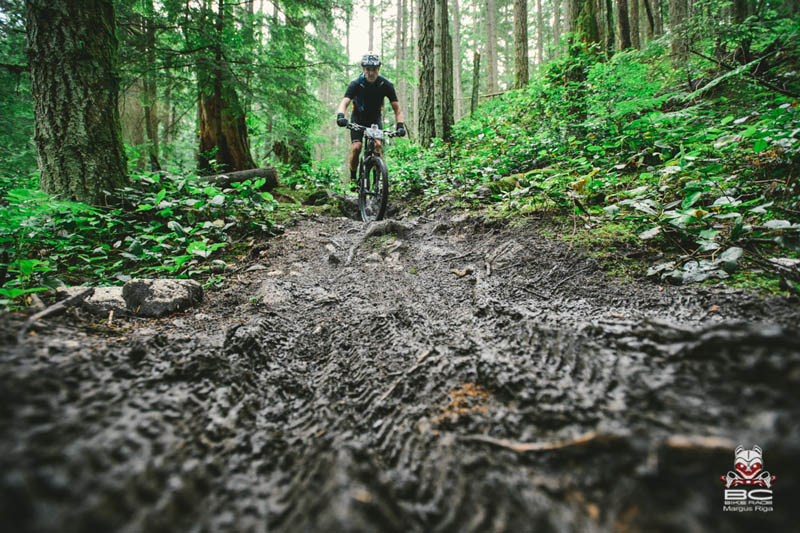 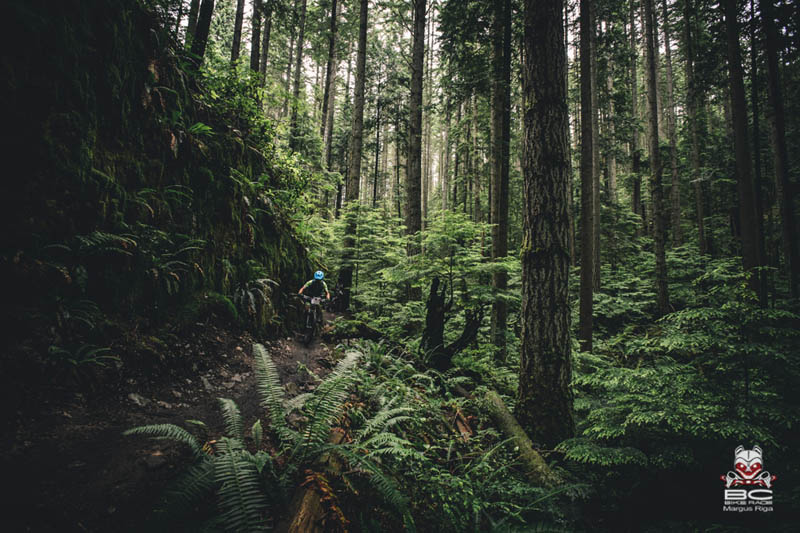 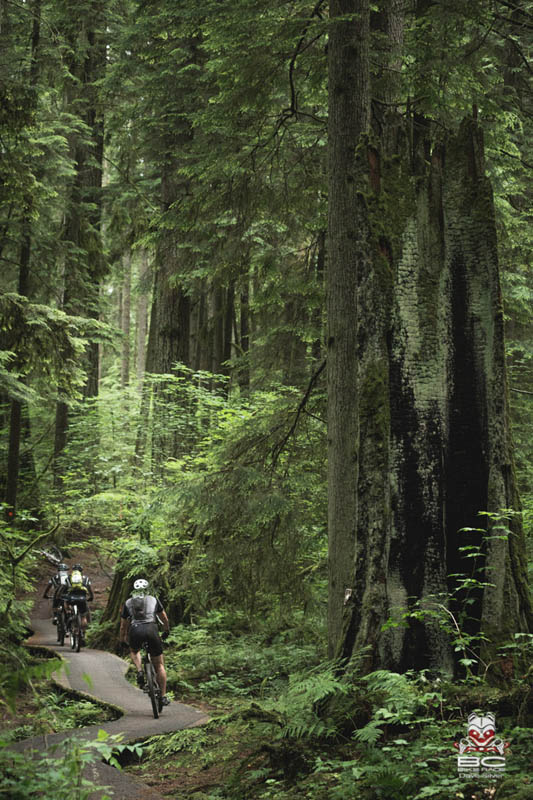 The opening stage of the 35km loop started with a lap on Seymour Mountain, and finished with the first Enduro of the week down Fromme's Espresso trail after a fresh rework from famed trail builder Todd "Digger" Fiander. It was an exciting return to The Shore after the 2010 edition of the BCBR saw many riders in over their head on classic shore style trail.

The North Shore has been undergoing a trail evolution that is making it more accessible to more riding styles through the efforts of local trail builders and the North Shore Mountain Bike Association. New riders to the mountains of North Vancouver may not know the difference between the trails from four years ago and it may be the hardest riding they have ever done but it's an example of how the difficulty of trails is relative to every rider's history. For the BCBR it means that it can more safely bring riders to the race founders' backyards and bookend a week of racing between The Shore and the Whistler Mountain Bike Park, two of the most influential areas in the world for mountain biking.

It's a historic moment for BCBR president Dean Payne who lives two blocks from the race start. "For me today was a dream come true. We wanted a stage here and the way that the local trail building community has rallied to get the trails ready for the course is amazing."

Men
If you were wondering how the rework on the world's most technical trails shook up the racing results the standings speak for themselves. On top of the podium was Sunshine Coast local and trail ninja Kris Snedden (Kona Bicycles), his American teammate Barry Wicks, and Transylvania Epic Enduro winner Tristan Uhl (787 Racing). Snedden has a reputation for being one of the best technical riders in the race every year and he used those skills to put the pressure on and let everyone else boil in his wake.

The 2013 second place overall finisher Spencer Paxson of Kona made the early move after coming off of the steep switchbacks of Circuit 8 and got a gap on the main body of the men's field. Snedden closed the gap to his teammate on the technical lower sections of the Bridal Path trail before getting paced up the steep climb of Old Buck to the top of Forever After, arguably the most technical trail descent in the stage. Paxson took a tumble and Snedden was able to maintain a tense gap on everyone else from that point on. The Texan Tristan Uhl bridged up to Paxson on Forever After and took off only to be caught on the next climb up Fromme.

Eventually the group of Barry, Uhl, Paxson, and last year's third place finisher Erik (The Viking) Skovgaard Knudsen (Denmark) came together at the bottom of the last climb. Barry and Paxson decided to not chase down their teammate and Paxson rode a steady tempo up the climb to the day's enduro stage on Espresso. It was a sprint finish between the group as they couldn't shake each other on the final decent down Espresso and through the upper neighborhoods of North Vancouver. The fight for the second spot became a sprint with Wicks winning while Uhl, Paxson, and Erik finished in that order.

With the top three riders of 2013 in attendance the racer for the podium has the potential to set some fires as the competition stiffens and sparks fly. Tristan Uhl seems ready to challenge the more experienced riders and won't let his freshman status hinder his quest for a spot on the podium.

Women
Leah Davidson (Specialized Bicycles) took day one's top spot on the podium after leaving 2012 competitor Sonya Looney (Topeak/ Ergon/ Canyon) and last years winner Wendy Simms (Kona Bicycles) on the first major climb up Seymour Mountain. Bike set-up was key for Davidson's assault on the BCBR, she "North Shored" her bike by putting a 2.3" tire with soft rubber on the front of her bike and adding a dropper post to her cross country ready dual suspension. Maybe regular riders of the shore have a different opinions on what the ideal shore bike is but for anyone looking to be a little more prepared a few key changes can increase confidence on the terrain that has helped drive advances in bicycle technology for decades. Here, light weight equipment will penalize you.

Davidson is returning to racing five months after hip surgery to repair cartilage damage and the last time she was at the BCBR was the last time it used the infamous North Shore four years ago. It was intimidating to return to her sophomore BCBR experience with that experience still fresh in her memory. "I was a little bit terrified coming in. I think it was perfect today, they filled it in and it was the perfect mixture of challenging track and features."

Sonya Looney also returned for her sophomore BCBR experience and returned with a self confessed much more appropriate bike. In 2012 she only had a 26" hardtail and the resulting beating that contributed to a broken wrist inspired her to return with a new ride. This year she brought a 29" dually to smooth the trail. Her second place finish on day one might be proof that she's on a mission for redemption.

Wendy Simms always seems to come to BCBR while juggling a side project that takes priority over racing. This year she received her reading list for her new PHd candidacy a couple days before the start. She played the day like a senior and bagged the 3rd spot on the women's podium.