Day two of the BC Bike Race sponsored by Rocky Mountain Bicycles returned to it's annual stop in the village of Cumberland for a new 48km course never used in the BCBR. Taking up most of the small main street, 600 racers launched out of town going the opposite direction from the town's traditional mining economy. The BCBR's support of the communities that host stages allows them to build more trail and grow their appeal as a cycling destination. That symbiotic relationship is positively pushing forward the future of Cumberland and the BC Bike Race. 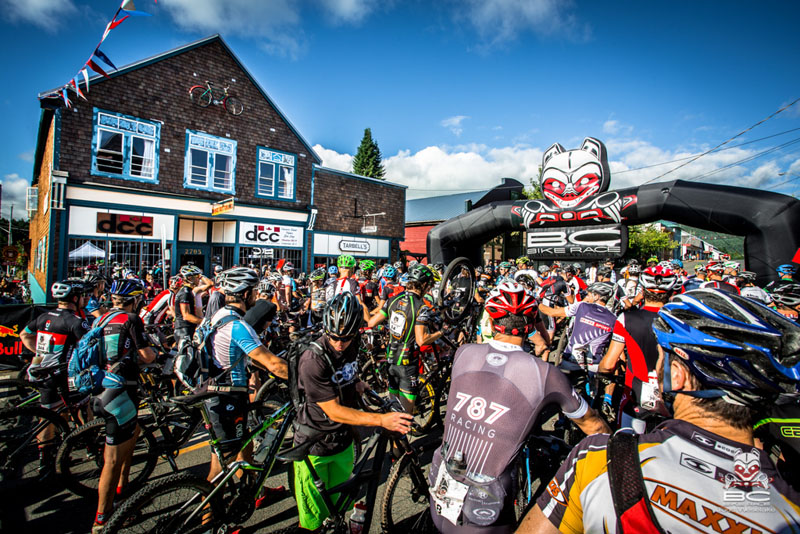 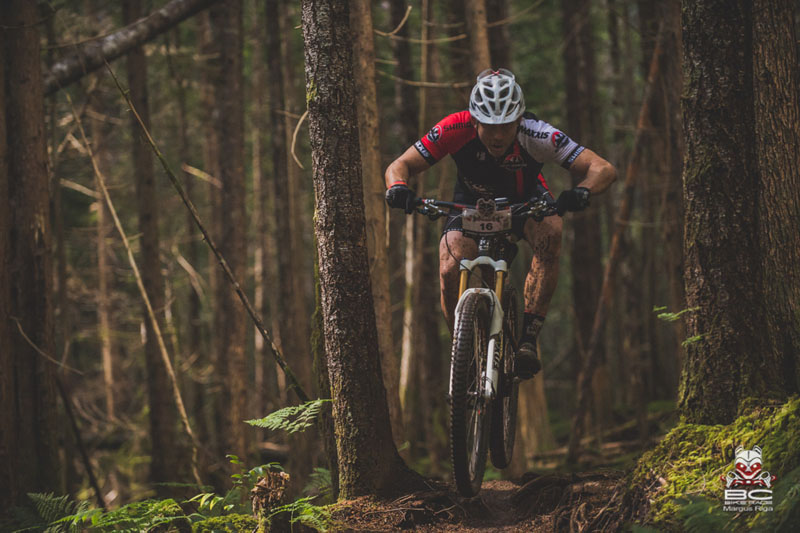 Clear cuts become meadows as they grow in 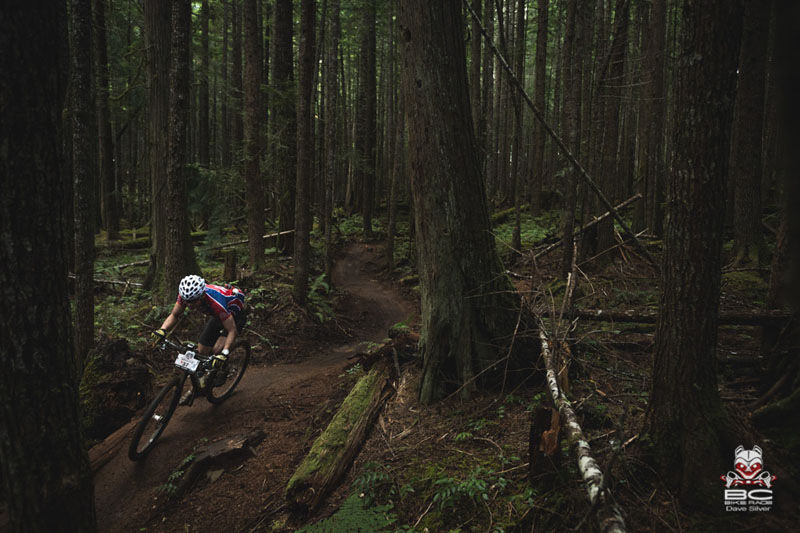 Cutting ribbons in the woods. 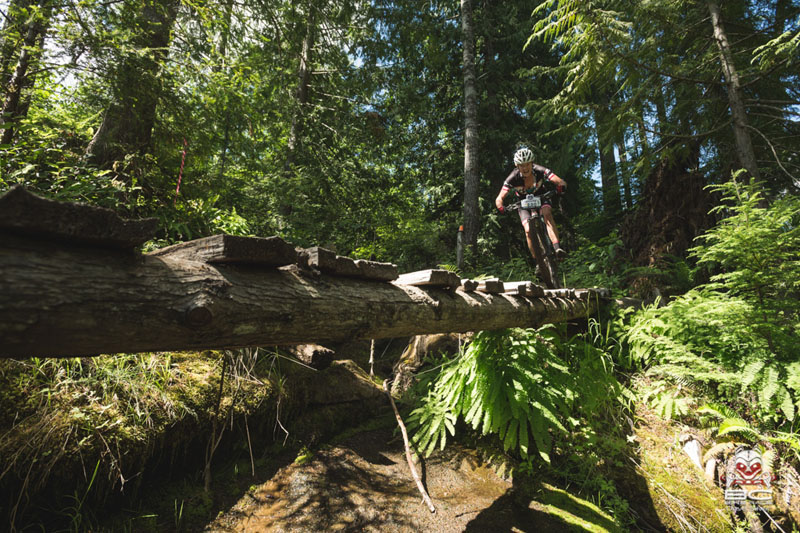 Wooden bridges are not something to fear or hesitate on

Once called Dodge City in the tumultuous wake of it's mining industry's departure, the modern economy of Cumberland has established mountain biking as its new natural resource. The BCBR and Cumberland's mountain biking have co-evolved over the last 8 years and it can be argued that the innovative thinking of this mountain biking mecca lead to the evolution of today's modern mountain bike stage race driving the BCBR to be one of the most progressive races in the world.

Three years into the BC Bike Race, Riding Fool Hostel owner, mountain bike advocate and course designer Jeremy Grasby suggested to race co-founders Dean Payne and Andreas Hestler that they stop doing a point to point style race and try using just the trails in the forests surrounding the town. Concentrating on singletrack and cutting out the road transfers was an epiphany for everyone involved. "When Jeremy asked about doing a single loop, my original response was that it wasn't done that way. Obviously it was an idea that was based on tradition and there was no reason not to change the format." Grasby's simple suggestion shifted the definition of what a mountain bike stage race had to be and turned the BCBR into a hunt for the best singletrack available.

The course in Cumberland was designed by Grasby after a vision in a dream about how to connect two pieces of singletrack that had never been in the BCBR. Grasby felt that the trails Blue Collar and Further Burger were too good to not be put into the race but it took a magic eye squint from a dream state to let the route emerge. Balanced by two major climbs, each plunge from the top delivered riders deep into the dark forests before winding through old clearcuts that are blooming into alpine meadows full of purple flowers. Front tires pushing through loamy corners while old tree stumps acting as gratuitous launching pads highlighted the stage. There are trails that feel like work, but the trails that keep you on your toes and make the bike dance below you are the ones that Cumberland excels at, the ones where riders grab the bars like a partners waist and get their best swing on.

Men
It may be a dance but it's still a competition and the top solo men took it to the line for another sprint finish. Last year's winner Kris Sneddon officially has a challenger. 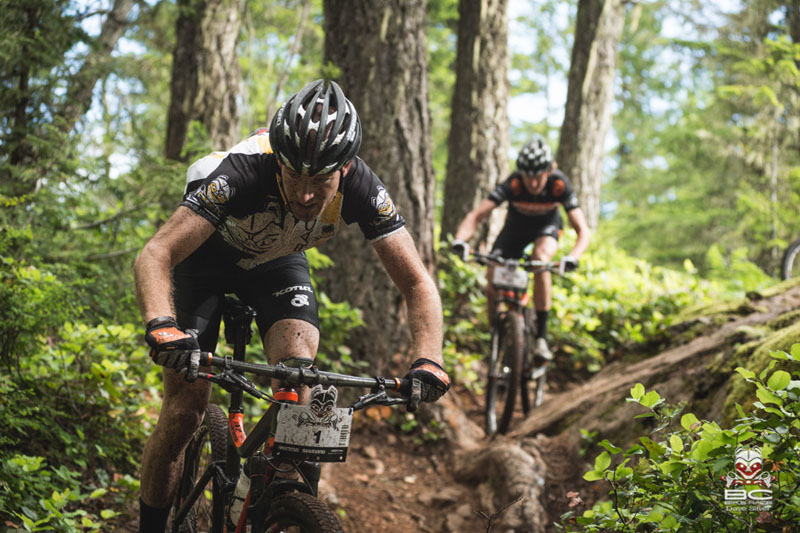 A group of five emerged from the first descent off of Further Burger the sounds of their tires coming down the gravel road before aid station 2 and dropping into the trail Bucket of Blood contained an intensity that was mirrored in the body language of each rider as they jostled their way into the woods. As the trail narrowed from old jeep road to singletrack there was no coasting and every corner was cut to be as short as possible.

The second loop out from basecamp and into the Blue Collar singletrack couldn't shake them down and the group who emerged from the trail 50 to 1 consisted of Tristan Uhl (787 Racing), Kris Sneddon, Spencer Paxson and Barry Wicks of Kona Factory Racing. Uhl who looks to be the lightweight of the bunch found a burst of power you wouldn't expect from his frame and took his first stage win.

Two day's in and Sneddon's status as captain of the BC Bike Race is getting a solid challenge from Uhl. It will be interesting to see how team Kona plays it's tactics to keep the yellow jersey.

Women
Today Leah Davidson (Specialized Bicycles) missed the top spot and the "Queen of Lean" Simms returned to the place she is most familiar with. On the third spot was last years main challenger Kim Hurst (Mud Cycles). In her first year at BCBR Hurst came with a hardtail but made the transition to a dual suspension and added a dropper post to get her bike BC ready. Missing from the podium was Sonya Looney who lost time on the overall. 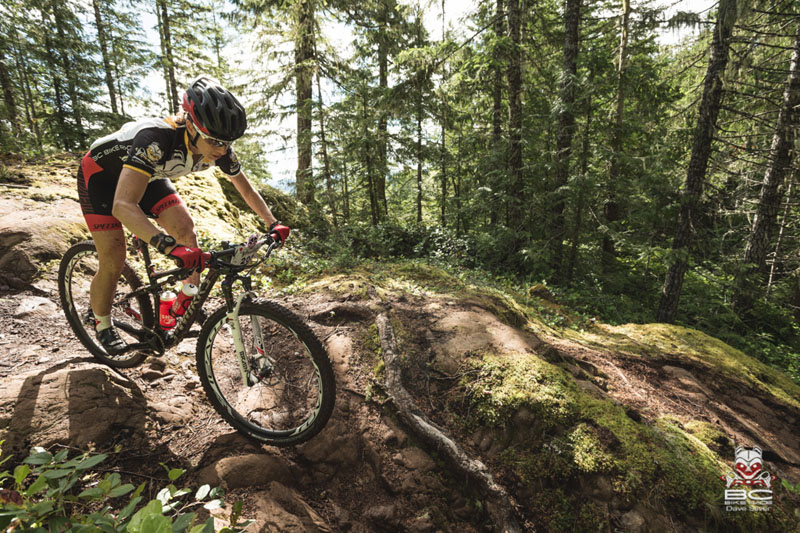 Men and Women
At the front of the women's duo field is mix of young and old with previous World Champion Catharine Pendrel showing her moves to her up-and-comer Luna Chix team-mate Maghalie Rochette from Quebec. Pendrel and Rochette have been running from the other super-star duo of Olympian Leslie Tomlison and Gretchen Reeves. It might be an unnecessary flight since Tomlison and Reeves seem to be enjoying a more casual ride than a stressful race.

The men's category has Rocky Mountain Bike team veteran Greg Day leading freshman Quinn Molberg on his first BC Bike Race adventure. A flat early in the stage put Day and Molberg on the defensive, but they managed to return to the front of the category before the finish line. "We were hoping to stay with the faster riders of the day, but the flat put us off our game. We definitely pushed ourselves to get back into position." Day.