After weeks of speculation, Trek is officially releasing the all-new Émonda, the world's lightest production road line, which includes the 10.25lb/4.65kg Émonda SLR 10, the lightest production road bike ever. Originating from the french verb émonder meaning "to prune or trim away", the three-year Émonda project began with the most stringent frame tube optimization ever. Carbon frames are often designed as much for aesthetics as for function, but Émonda focused solely on making sure every strand of carbon served a purpose. Form followed function, beautifully, and the result is svelte, elegant, minimalist perfection. Every detail of the Émonda line, from frame design to each component choice on every model, serves the same audacious goal: to produce the lightest line of production road bikes ever offered. 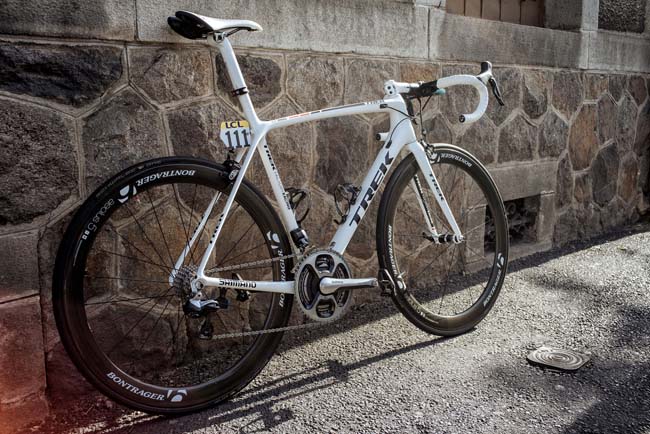 "The idea was; we have the resources to build a complete bike system. Let's use that advantage to look at every aspect of the bicycle and how each component interacts with all the others," said Trek Road Product Manager Ben Coates. "Once we covered the basic bike functions, we focused on every minute detail. Every decision was based on what was the overall lightest option for the system."

Not only did Trek set out to build the lightest production road line but also the best riding road bike Trek has ever offered. Pruning away the unnecessary means leaving only what's needed, but simply being the lightest was not going to be enough. Émonda's ride quality had to surpass every previous bike. To ensure this, Trek called upon its portfolio of world-class athletes, in particular the riders of Trek Factory Racing. For three years, iteration after iteration of testing was performed by Trek Factory Racing, our in-house experts, and other pro racers to determine the perfect carbon layup and ride characteristics for each Emonda frame size.

"It's lighter, it's stiffer, it's the best bike I've ever ridden. Accelerating this bike feels amazing," said Trek Factory Racing's Bob Jungles, a member of the test team who rode and provided feedback throughout the ride test phase of Émonda's development.

When parts could not be found that met the development team's stringent requirements, they built the parts themselves. The embodiment of this dedication to the ultimate goal is the new Bontrager XXX bar/stem combination (129mm drop, 93mm reach) found on the Émonda SLR 10. This Trek/Bontrager design collaboration saved the team 75 grams over a comparable bar and stem combination. Not to be outdone by their handlebar counterparts, Bontrager's brake team developed the new Speed Stop brake with mounts that connect directly to the frame via two bolts to reduce component parts, save up to 35 grams per caliper, and increase braking performance. An adjustable leverage ratio, a two position quick release, and an ultra-wide stance add to Speed Stop's versatility and adjustability. This Trek/Bontrager collaboration also increases tire clearance so that running larger tire sizes is possible.