Sweden’s Jonas Alstrand of Team Giant-Shimano outsprinted The Netherland’s Theo Bos of Belkin-Pro Cycling to win Stage 2 of the Tour of Alberta, presented by ATB Financial, at Red Deer Thursday. 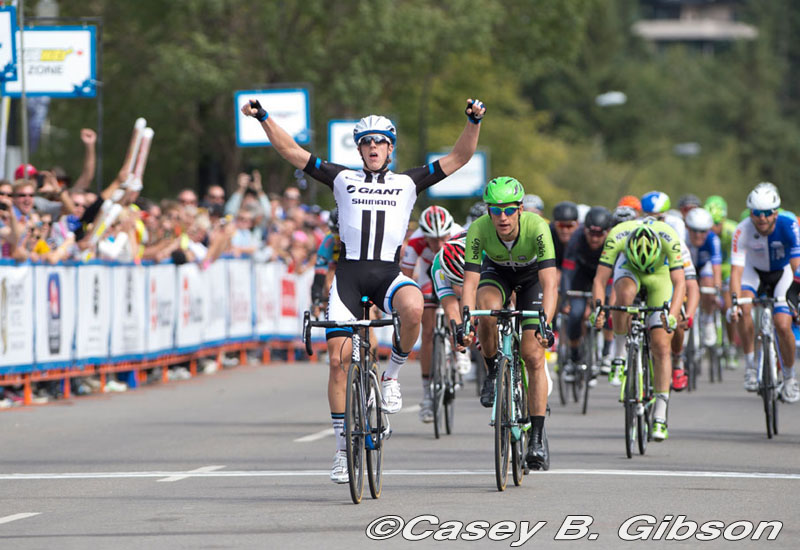 “The plan worked out very well for us, and I’m glad to stay in the leader’s jersey. And, we got the stage win,” said Domoulin.  “But we burned a lot of energy. Our team is very tired from the chase. We have Jonas to thank for a great finish.”

Alstrand, Bos and Zepuntke drag-raced the final 500 metres with a downhill sprint topping off at close to 80 kilometres  per hour.

“That was a fast one,” Alstrand said, referring to the final run-in. “I stayed in the wheels on the final climb (about 3 km from the finish) and made it over the top in the top ten. The run in was real quick and I was able to follow the wheel of Bos and another, then wait until 200m to go to launch my sprint.”

The stage was one of the fastest in the two-year history of the event, averaging 47.8 kilometres an hour (29.7 mph). A long breakaway instituted by Orica-GreenEDGE’s Simon Yates of Great Britain went clear for most of the second-half of the race. American Kiel Reijnen of UnitedHealthcare Pro Cycling, Yates and eventual breakaway companion, Ben King of Garmin-Sharp, who bridged coming into the three-lap circuit in Red Deer, stayed clear until 3 kilometres remaining in the race.

“I was really trying to steal the overall lead more than go for a stage win,” Reijnen said. “Ben and I were giving it a go and weren’t that short. The race was real fast today.”

The American riding for UnitedHealthcare Pro Cycling is coming off a stage win and overall Sprint Points jersey win at last month’s USA Pro Challenge in Colorado, U.S.A.  Reijnen and King entered the race both 26 seconds behind race leader Domoulin.

Domoulin’s lead is now nine seconds over Zepuntke, the revelation of this year’s Tour of Alberta. Domoulin won Tuesday’s Prologue opener in Calgary while Zepuntke won Wednesday’s rainy stage at Lethbridge. However, it was Alstrand’s day after Team Giant-Shimano chased all the day to ensure Domoulin’s continued race lead.


Friday’s Stage 3 will start in Wetaskiwin and route northerly through sprint lines in New Sarepta and Fort Saskatchewan before a unique finish on an airstrip at the Edmonton Garrison. The 156.9 kilometre race will finish with a flat fast finish that should again feature the race’s top sprinters. Time bonuses of 10, 6, and 4 seconds respectively will be awarded to the Top 3 finishers.

Coverage continues on Rogers SportsNet One Friday from 2:00 to 4:00 pm MDT. The event is being televised to 121 countries. The elite, all-professional field is down to 113 cyclists from the 118 that started Tuesday. Athletes from 19 countries are represented in the race.

"Garrett, Hugo, Ben, and Jordan all remained in the peloton and only after good teamwork did the others trail in behind," commented team manager Gord Fraser. "An uneventful day here but after yesterday, it was welcome.  Another 150 kilometre stage tomorrow from Wetaskiwin to Edmonton-Garrison, and perhaps the ominous cross winds may appear." 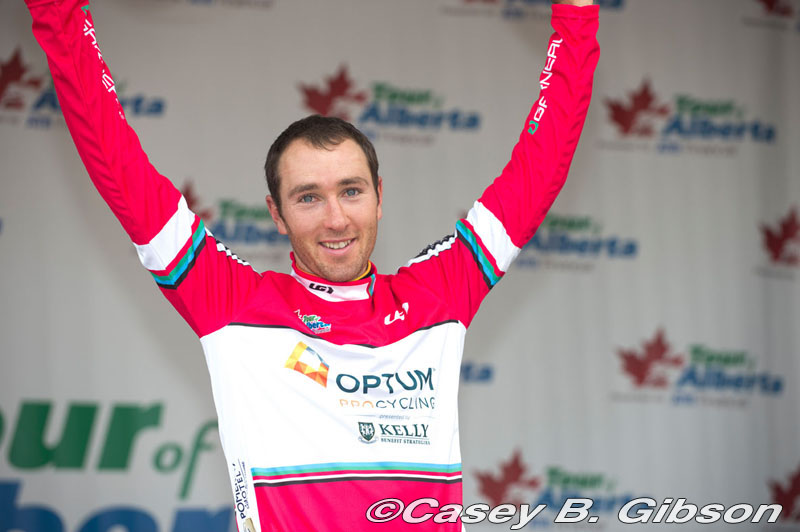 Brief results from the third stage in Alberta