Canadian Track Sprint Coach Erin Hartwell is happy with the outcome of the 2014 UCI Track World Cup in London and only sees positives as the program continues to grow to new heights.

Hartwell joined the team of coaches at Cycling Canada this spring, with the objective to revitalize the sprint program. His arrival had an immediate impact, with the new team posting strong performances throughout the first two World Cup events of the season.

"We saw a little bit of a mixed bag here in London. We were coming off a high at Guadalajara [Mexico] with a couple of stellar performances in the individual events with Hugo [Barrette] and Monique [Sullivan], so I was looking for a little bit more here," admitted Hartwell.

"I am however very happy with the team sprints here. The women, with Monique and Kate [O'Brien], are now ranked 13th in the World, looking to jump in that top 12 position towards the World Championships. On the men's side, we had a development rider with Evan [Carey] as a starter. With Hugo being sick coming into the race, I've shuffled Joe [Veloce] into the third position, and he came through very well."

Monique Sullivan (Calgary, AB) raced for Canada at the 2012 Olympic Games in London, and soon after announced that she would shift her focus to complete her studies at the University of Calgary. Guadalajara, last month, marked her first international competition in two years, and she went on to finish tenth in the Keirin.

Coach Hartwell only had good words for the Olympian. "Monique's return to competition couldn't have been better. I think she's a bit hard on herself because she doesn't win right away, but I saw nothing but constant improvements since her return at the Pan-American Championships last fall. She's well positioned in terms of points for the World Championships, and she will continue to improve." 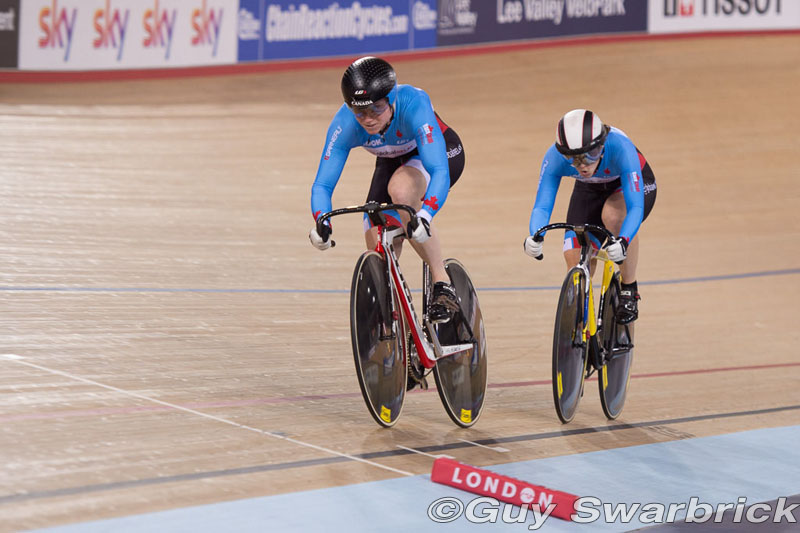 Racing as the sole female sprinter for Canada leading up to the 2012 Olympics, Sullivan can now enjoy the presence of a teammate in Kate O'Brien (Calgary, AB). O'Brien hails from the sport of bobsleigh and, like Sullivan, she also happens to study at the University of Calgary. The two women gelled instantly and are now becoming a very strong duo on the verge of a qualifying position for the Rio 2016 Olympic Games.

"Kate is a one of those real diamonds in the rough. It's very cool to have found her at this stage in the game while we were at a Talent ID camp in Calgary this past spring. She comes to us from bobsleigh, and the progress she's made in such a short amount of time is truly phenomenal. We are seeing weekly improvements and she catching up very quickly with the rest of the world. Once we get to the next World Cup and at World Championships, we'll be in the top 12 rankings and, hopefully, in the Top-2 of the Americas rankings."

On the men's squad, Hugo Barrette (Cap-aux-Meules, QC) entered this World Cup carrying a sickness from a training block in France and didn't fully realized his potential this weekend. With Hugo off the line-up, the spotlight turned to Joe Veloce (Fonthill, ON), who is also making a return to the track after suffering a major crash in the fall. Veloce narrowly missed qualifying for the first round of the Sprint on Sunday morning, by only two-thousands (0.002s) of a second.

"It's unfortunate for Hugo to come in here sick, as he came off such a performance [in Guadalajara]. The sickness took a toll on him, and he wasn't able to perform yesterday. I had to pull him off the individual sprint today," said Hartwell, who added "Joe took the opportunity to represent his country, and he posted a really good time. He was only two-tenths off the leaders, and that's the closest he's been since his massive crash last year at Colorado Springs." 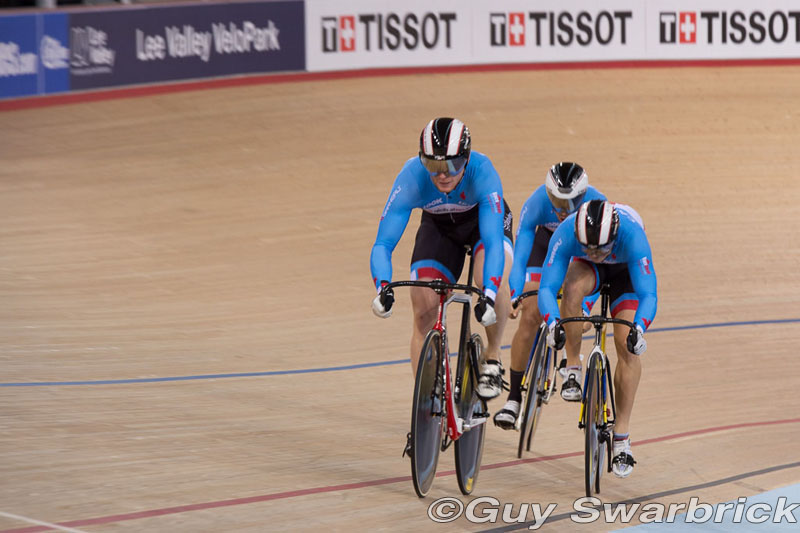 The men's Team Sprint welcomed two young rookies to its squad this year, with Joel Archambault (Ste-Christine, QC) and Evan Carey (Victoria, BC). Hartwell is pleased to see such progress from two rookies at international competition. "Joel [Archambault] and Evan [Carey] are green as grass. I am very impressed with their level of maturity, coming from regional development models. Evan in particular has stepped up and has impressed me more than anything. He can stay calm and composed, and get the job done. We are looking for reliability and consistency within our program, and Evan has shown that when he's called upon, he can deliver and doesn't make mistakes.

Hartwell also tipped his hat to youngster Joel Archambault, who was scheduled to race in the Team Sprint at this event. "Unfortunately, Joel made a small mistake going down at full speed in training on Thursday, and he crashed pretty hard. He didn't get to compete here, but I have full confidence that he will be back and ready to perform."

Next up for the Canadian sprint program will be the World Cup in Columbia and the World Championships in France, followed by an intensive training block prior to the Toronto 2015 Pan-American Games.