The UCI announced the 2015 calendar for the UCI World Cycling Tour last month, with one event in North America - the Grey County Road Race in Ontario, organized by Canadian Masters rider and 45-49 age group World Champion Bruce Bird. The 13 events hosted around the world in the UCI World Cycling Tour offers amateur and masters-age riders an opportunity to qualify to enter the Amateur World Championships, to be held in early September, in Aalborg, Denmark. We spoke with Bruce Bird about his event (see further down).

The classical venues such as Italy, Slovenia, Denmark, France, Greece, South Africa and Australia remain in the series, but there are also new locations and venues. While the existing qualifier events set new participant number records, there is also an increasing number of interested new organizers.

The Grey County Road Race in Canada will be the only North American stop in the UWCT. Blue Mountain's village north of Toronto will offer a great experience and challenging courses, both for the time trial and the road race.

Additional events in Germany, USA and Belgium might be added later to the calendar.

Riders will need a national license from a UCI affiliated cycling federation in order to compete in the 2015 World Championships. This is not the case for the qualifier events. A day license won't be accepted anymore.

Qualifier events for the 2016 World Championships

Canadian Cyclist: This is the first year your race is on the UCI World Cycling Tour; had you always planned to put it on the UWCT?

Bruce Bird: This is my fourth year of organizing this event, and it has always been my goal to organize a top-level event. So I started as an O-Cup [Ontario Cup] event, and the Junior provincial championships. But I also wanted to compete in the most desirable races myself, and heard through word of mouth what those are. So I'd been going to a lot of different events and getting a feel for what the best ones are and bringing that back locally to Ontario.

CC: Now the UWCT is not like a traditional race; it's a different category of race, right?

BB: Yes, and this is fairly new to cycling. The UCI decided in 2011 that they wanted to take amateur cycling all around the world. You have traditionally seen the big cycling countries - Belgium, Italy, France, Spain - being dominant, but the UCI wanted to make it more of a global sport. So instead of just having a Masters World Championships, the concept was to have an Amateur World Championships that moved around the globe.

The other [Worlds] are for professional riders, so the criteria [for the Amateur Worlds] is that you are not a pro rider, you are not on a pro team recognized by the UCI. 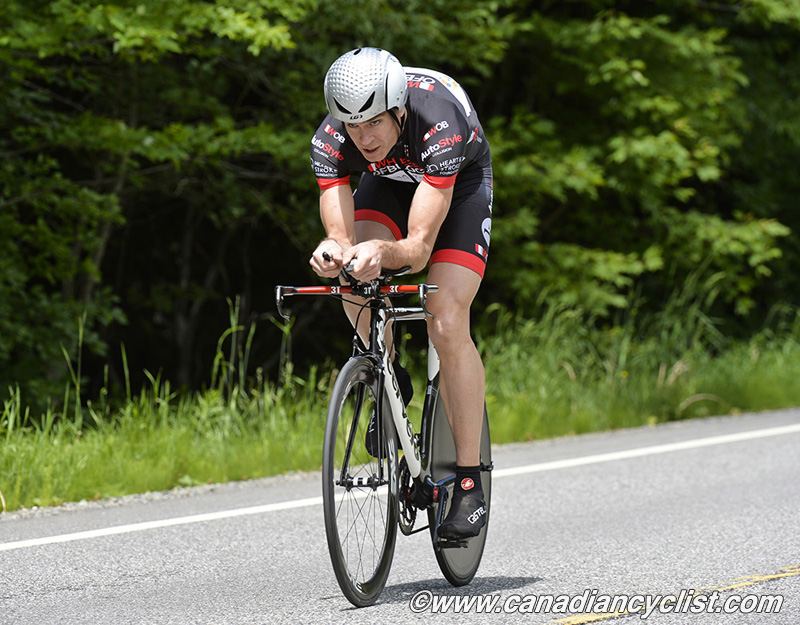 Bruce Bird at the 2014 Road Nationals in Lac Megantic

CC: So these events, like your race, are qualifier events for the Amateur World Championships?

So you can represent Canada as an amateur athlete. It's all coming out of your own pocket, but you feel fantastic to put on the uniform, and when you line up and everyone from all different countries around the world are competing against you ... I found it was a great experience.

I saw that in triathlon as well; they have the same model. So I'm sure the people at the UCI saw that this makes a lot of sense, and was a model they could apply to cycling.

CC: This is the only qualifier event in North America, so what do you have to do to meet that standard? What are participants going to see that is different from, say, an Ontario Cup race?

BB: The first thing that is different is that the race has to adhere to the World Cycling Tour rules that the UCI has set up. It's like what you would see at a provincial or a national championships; it's different categories [than an O-Cup]. We have established ability-based racing in Ontario, and at an O-Cup you move up to different levels based on results. It's made for some of the greatest Masters racing I've ever seen, really tough competition. When we go to Provincials or Nationals it is age-based, so this [UWCT] is age-based as well. So it's open to people who want to qualify for the [Amateur] Worlds, aged 19 and older. I will have a Junior O-Cup race running as well for younger riders.

CC: So tell me about the course.

BB: It always starts with the course for me, it has to! That's the most important thing in designing a race. When you think about great races, they have iconic courses. That's what drew me to Blue Mountain. We have 300 metres of elevation, that's why there are all those ski hills around there. Then you have the Village where everyone can stay.

You're going to see a neutral start from the Village, then a climb up the Escarpment, and a mountaintop finish on something called Banks Wall. It's going to be a challenging event and the final punch of a climb everyone will get a chance to experience. There's going to be three different distances.

CC: We often hear about how expensive it is to run a bike race; I'm sure you have some experience there?

BB: Oh my! You asked me earlier about what it takes to be a qualifier event ... you have to put together a plan and submit it to the UCI for approval. You also have to commit to paying their licencing fee [note: Bruce declined to state the fee]. To have the event break even, based on the entry fees from participants, is definitely a challenge, and that's why you see races trying for a year or two, and then it's no longer on the calendar. That's why you see more gran fondos and mass start events, and not so many broken up by categories, which are individually started and individually supported.

There is a significant commitment to making this work, and in North America ... I went to a qualifying event in Winston-Salem last year and they had a mass start event. I just thought there was an opportunity to break it out by groupings. That's the sort of event that I would much prefer to take part in, because you are racing against your peers. You are separating out the men and the women, and you are separating out the age groups. 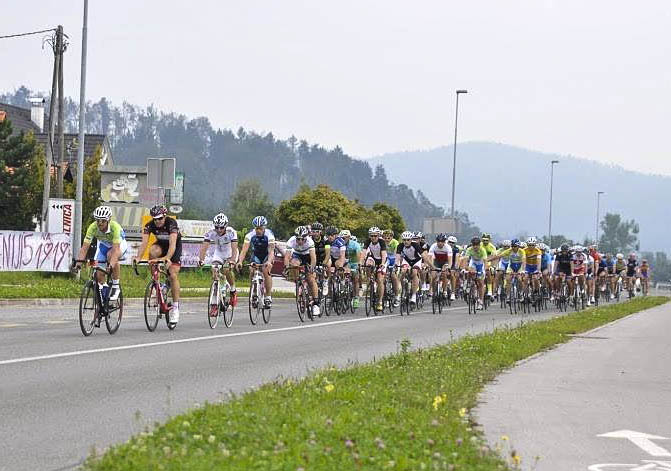 Bruce Bird sitting in 2nd position in the peloton in Ljubljana, Slovemia 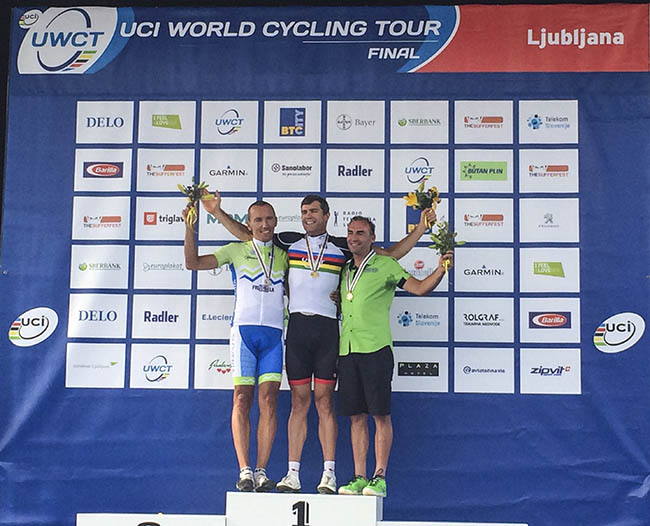 On the top of the podium

CC: Now, you've done a qualifier and then gone on to become Amateur world champion. How cool is it going to be to wear rainbow stripes on the start line next year?

BB: It's a great honour to be able to do that. My team, the guys at Wheels of Bloor, and the good people at Cervelo, got me a custom painted frame for next year. Toronto has people from so many different parts of the world and they have been coming up to me and saying cycling isn't as good here. Now I can say to them: 'See? We have good riders and a high level of racing here.' So I have to give credit to the level of racing we have here.