The reported net loss includes impairment losses on goodwill and trademarks, restructuring and other costs totalling US$105.2 million or US$3.25 per diluted share and US$12.9 million or US$0.40 per diluted share for the years 2014 and 2013 respectively. As such, the Company is presenting adjusted financial information as it believes that excluding these items is a more meaningful comparison of its core business performance between the periods presented.

"Overall performance in 2014 was better than the previous year. This is a tribute to our executive teams in all three segments as we maintained a strict focus on the businesses even while planning the future of the Juvenile segment and rebuilding Dorel Sports. The fourth quarter Lerado acquisition is a major initiative to improve Dorel Juvenile's long-term profitability, shift to a more vertically integrated business model and broaden its global footprint. Lerado will allow Dorel to better service our existing customers and provide a base from which to expand the segment's business in China and other parts of Asia," stated Martin Schwartz, Dorel President & CEO.

"Results for Dorel Sports were strong as the segment recovered from a disappointing 2013. The revitalized management team delivered solid earnings as it refocused on its strong brands and successful new product introductions.

"Dorel Home Furnishings maintained its push in the Internet sales channel and drop ship vendor programs to post significant progress. For the first time in many quarters there was also an increase in Home Furnishings sales to the brick and mortar channel," concluded Mr. Schwartz.

Dorel Sports delivered its fourth consecutive quarter of growth. Revenues increased US$14.6 million or 6% in the quarter and adjusted operating profit improved by 45.2%. The organic sales increase, excluding the impact of foreign exchange and acquisitions was approximately 8%. Pacific Cycle led the sales growth with sales to mass merchants increasing in both bicycles and electric ride-ons. Caloi's sales increased and in local currency operating profit increased by double digits versus prior year. This growth was driven by the Cannondale and GT business launched in Brazil during the year. 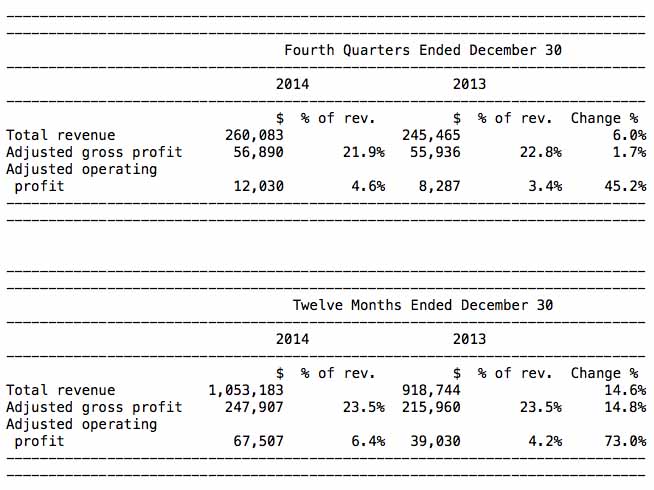 The segment was challenged by the unfavourable effect of the drastically appreciated US dollar against all major foreign currencies. The net negative impact was approximately US$4 million for Dorel Sports. Also in the quarter, Dorel Sports began operations in Chile, which resulted in costs of US$0.4 million in connection with the start-up.

The organic sales increase after removing the impact of foreign exchange and acquisitions was approximately 8%. The increase was in both the IBD and the mass merchant distribution channels, driven partly by improved weather conditions with a rebound in the global bike market when compared with prior year. Overseas markets in the IBD channel, particularly in Europe and Asia continued to contribute to the organic sales increase. Further highlights were strong shipments of Pacific Cycle's battery powered ride-ons and improved sales in Canada.

The adjusted operating profit improvement was at all major divisions, led by a strong turn around in the IBD sales channel. This along with strong sales growth at all other major distribution channels and improved operating efficiencies contributed to better earnings. For the year, the net negative impact of adverse foreign exchange rates was approximately US$3 million.

"Over the last decade Dorel has truly become a global company, particularly in the Dorel Juvenile and Dorel Sports segments. Today, just over half of our net income is derived from outside North America. We believe this is the right long-term vision for the growth of the Company. However, the recent meteoric rise in the value of the US dollar has significantly reduced our margins in our markets outside the US. This difficult situation is expected to impact us for at least the first half of 2015. We are working to adjust to these new exchange rates, which is made more challenging by continued currency rate fluctuations. Until we see some stability in the currency market, our visibility on earnings will remain difficult," stated Martin Schwartz, Dorel President & CEO.

"On the positive side we are experiencing sales and profitability growth in the United States in all segments due to renewed strength with our mass-market customers and on-going success in the Internet sales channel.

In Dorel Juvenile we are making progress to integrate our Lerado acquisition and this will remain a priority for the year. As we have stated, Lerado will not be accretive to earnings in the first year of operations.

For Dorel Sports we believe that the second half of the year will see growth in the independent bicycle dealer (IBD) channel. This expectation is based on the planned introduction in July of our innovative new bicycle model year line-up, as well as a stabilization of margins in our markets outside of the US. In addition, we anticipate another solid year in our mass market bike business.

In Dorel Home Furnishings, we are optimistic as we start the year. Demand is increasing and the weak Canadian dollar will benefit the segment's Canadian operations," concluded Mr. Schwartz.