Cervélo will donate over $30,000 in bikes to equip Canadian Veterans participating in the event. Later this summer the bikes will then be auctioned with all funds raised directed to the programs and services Wounded Warriors Canada funds nationally in support of our ill and injured Canadian Forces members, Veterans and their families. 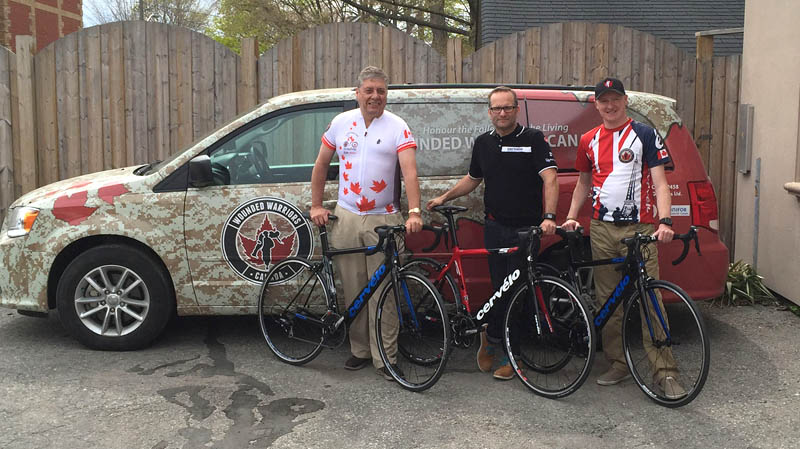 Scott Maxwell, Executive Director of Wounded Warriors Canada commented, "Cervélo has been supporting our cycling events since 2012. The company and its employees are passionately committed to health and wellness and have applied this to help support our ill and injured Canadian Forces members and Veterans lead an active and healthy lifestyle. We are extremely grateful for their support."

Glen Innes, Cervélo Business Development Manager, commented, "Here at Cervélo we understand how important a healthy body is to a healthy mind. If we can get more service men and women, suffering from Post-Traumatic Stress Disorder, riding bicycles we can aid them in their battle with this and other Operational Stress Injuries."

The Ride will begin on June 13th, at the iconic Vimy Ridge Memorial. Departing Vimy, the ride heads north following the footsteps of Canadian WWI troops, crossing into Belgium and its historic Flanders Fields. Riders will visit the sites of historic Canadian battles, including Passchendaele and Ypres, and continue north to the city of Bruges and site of major Canadian operations during WWII. From Bruges, the ride's focus shifts to the major role played by Canadians on the path to Victory in Europe as Canada commemorates the 70th Anniversary of VE Day and the Liberation of the Netherlands. The tour will culminate on June 19th in Nijmegen at Groesbeek cemetery.

All funds raised support Wounded Warriors Canada's national slate of mental health programs and services in support of our ill and injured Canadian Forces members, Veterans and their families.