The first Mid Island Velo (MIVA) criterium this season was held on the popular Boxwood circuit. There were 24 starters plus 2 youth riders. As is customary when there are youth entries, the first 3 laps were neutralised and then Abigail and Aiden Hare were off on their own for 20 laps. The seniors riding 32 laps- or 35 kilometres.

Nick Kupiak immediately took off and set a fast pace, with the rest about 5 seconds behind and there he stayed until the first prime, which he took comfortably, with Ray Wagner (CVCC), Justin Mark (BCBR), and MIVA's John Lam in the next three places.

By now, a group of eleven had detached itself from the rest of the riders and in a further ten laps had lapped everyone else, ten of whom formed a second pack and the rest straggling off the back.
Just after the midway point, Peter Mac's car horn sounded another prime and Nick took this too from Ray, with Justin in third.

The lead group stayed together with the second bunch mixed up with them but a lap down. And at the third prime, with seven laps left, Nick scored his third victory, tjhis time edging Justin, Brodie Hay (Dr. Walkers) and Janna Gillick who had been in the thick of the action for most of the race.

The final prime, with 3three laps left was again taken by Nick who proved to be the strong man tonight. Justin again took second and Janna beat out Brodie for third spot.

The sprint for the finish was hotly contested by the lead group with a few of the lapped riders in there too just to make judging more difficult. Nick beat out Justin by under half a wheel for the win, with Shepherd Stewart (MIVA) edging Ray Wagner for third. Brodie Hay cruised in for fifth just ahead of Normon Thibault (Frontrunners and Janna rounded out the top seven, taking the womens top placing. 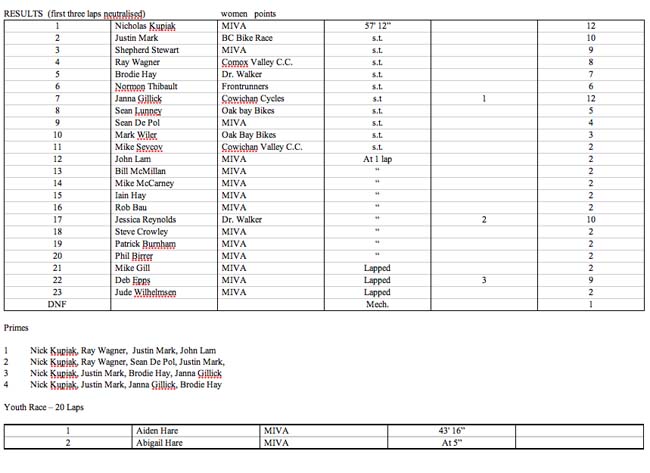