The second day competition at the opening round of the Mountain Bike World Cup, in Nove Mesto na Morave, Czech Republic, saw Switzerland dominate the Elite women's race, while the host nation finished off the weekend by taking the Elite men's title.  Defending women's champion Jolanda Neff (Stoeckli) retained the Number One plate with her win, while Olympic champion Jaroslav Kulhavy (Specialized) gave Czech fans what they had been hoping for in the men's race.  Canada had one rider on the podium, with world champion Catharine Pendrel's (Luna) fourth place in the Elite women's race.

After raining through the night, conditions gradually cleared throughout the day.  However, the rain had soaked the course, and rocky sections quickly became mud covered and slippery, leading to many crashes.

Neff had her usual fast start to open a 15 second lead by the end of the start loop.  Leading the chase was legendary Gunn-Rita Dahle Flesjaa (Multivan Merida), who took her first World Cup victory 19 years earlier.  With Dahle Flesjaa were defending Nove Mesto champion Pauline Ferrand Prevot (Rabobank Liv) and Annika Langvad (Specialized).  Other big names, including Pendrel and Maja Wloszczowska (Kross), did not have as strong a start and were already out of contention for the win a lap into the race. 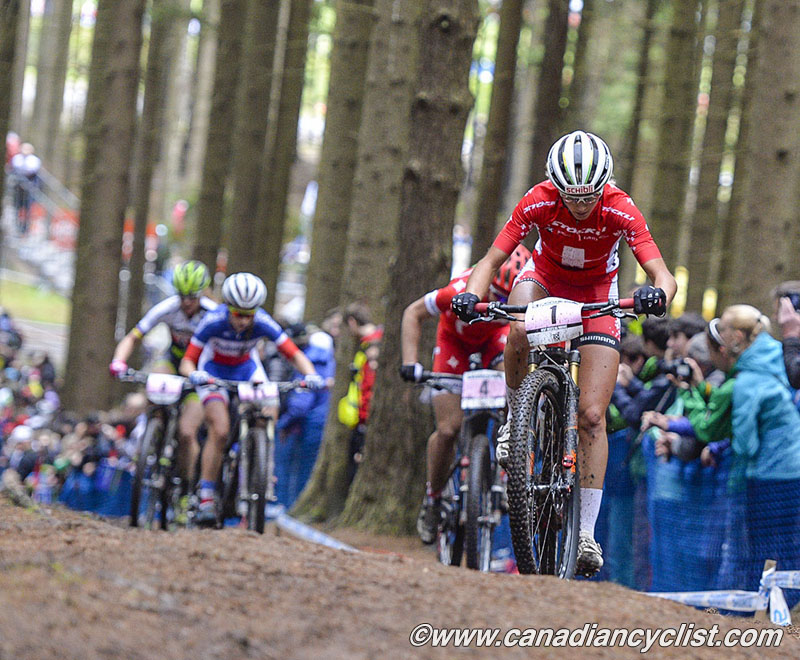 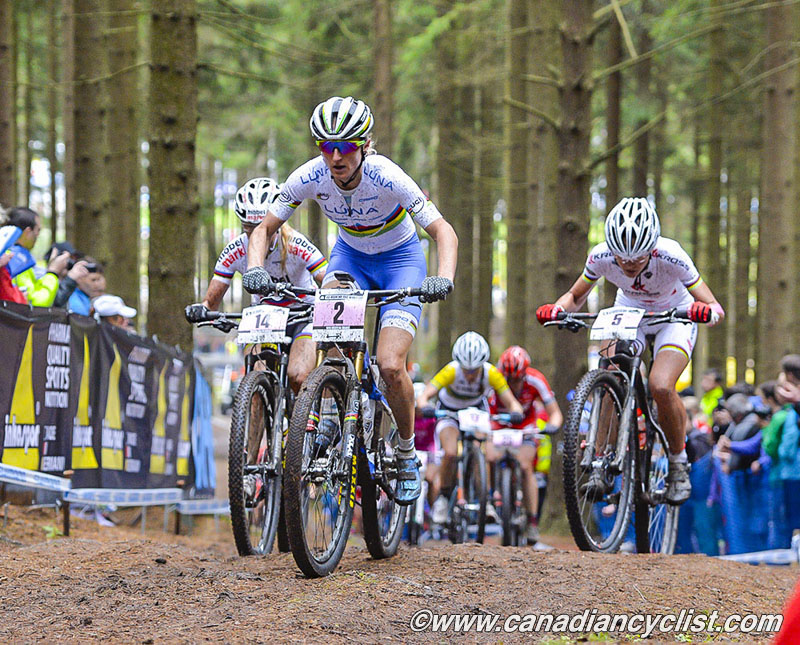 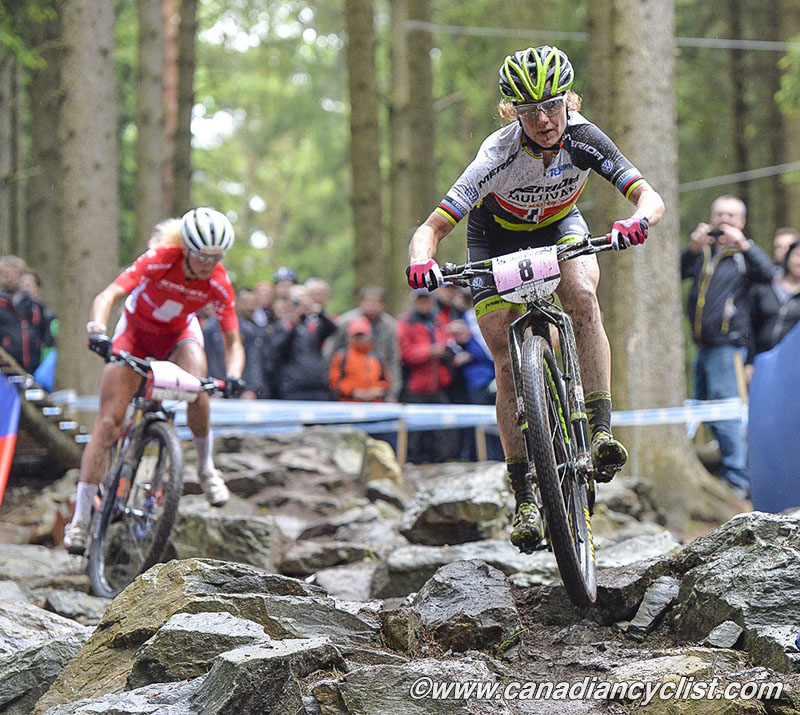 Dahle Flesjaa joined Neff on the first lap, and the two rode away from the rest of the field, with Langvad settling into third and Ferrand Prevot in fourth.  Pendrel worked her way up to fifth fairly quickly, but was already 49 seconds down after a lap.  The race held this pattern until the final lap, when Neff dropped Dahle Flesjaa, only to see the Norwegian battle back to within a second by the finish line.  Langvad crashed in the final lap, allowing both Ferrand Prevot and Pendrel to get by her. 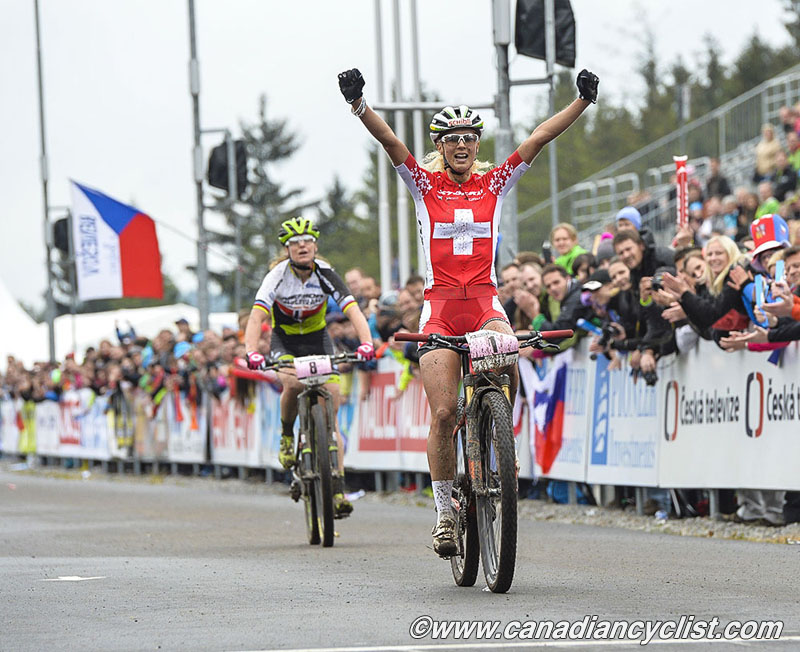 "It was really hard and it feels unreal," commented Neff.  "I didn't believe it until I really crossed the line. I am really happy how it went today.  Once she [Gunn-Rita Dahle Flesjaa] even got a gap on me, but I caught her back.  In the last lap I really rode as fast as I could. I knew if I went into the downhill first I had a good chance of taking the win."

"It was really important to start the season with a win.  Nove Mesto means really a lot to me.  In 2011 I won a Junior World Cup, in 2012 the Under 23 and now I finally win the Elite.  It feels absolutely amazing."

Pendrel said that she didn't have that snap in her legs to ride with the leaders.  [Note:  We have an interview with Catharine here]

In the past four years of the Nove Mesto there have been only two winners of the men's race - Kulhavy took the first edition, and Nino Schurter (Scott-Odlo) the last three.  Once again, it came down to these two riders.

Schurter attacked on the start loop, with Kulhavy, world champion Julien Absalon (BMC), Australian champion Dan McConnell (Trek Factory Racing) and Florian Vogel (Focus XC) the only riders to stay with him.  Schurter surged again on the first full lap, and this time only Kulhavy could hang on. 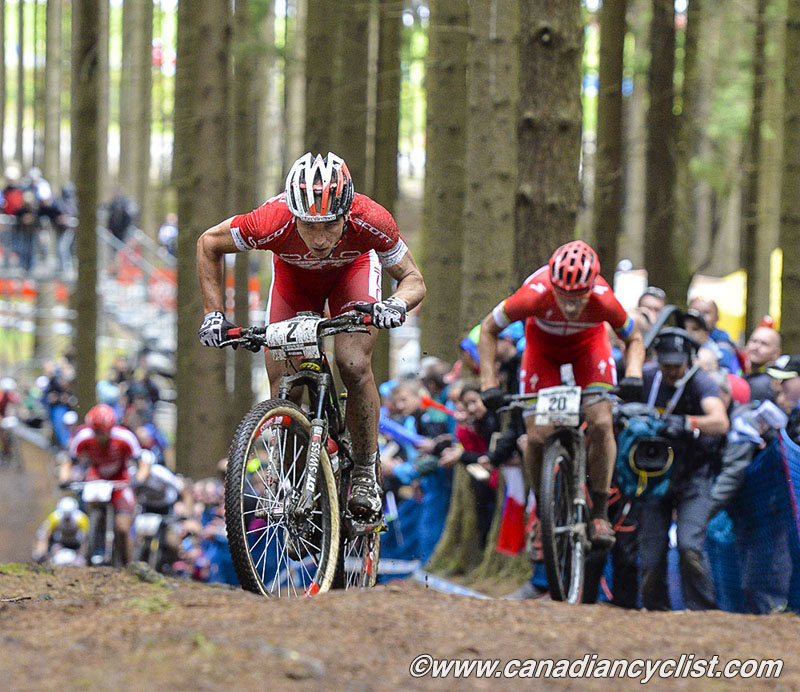 Schurter appeared to be stronger, gapping Kulhavy on the climbs, but the Czech rider would always come back, possibly motivated by the cheers of thousands of his fans around the course.  in the final half lap the tables were turned, when Kulhavy attacked and Schurter could not respond.  The Czech rider rolled into the finishing arena to stands full of cheering fans, to win by 24 seconds.

Absalon and Vogel first dropped McConnell, and then Absalon went solo mid-race to take third ahead of Vogel, with Mathias Fluckiger (Stoeckli) taking the fifth and final podium spot. 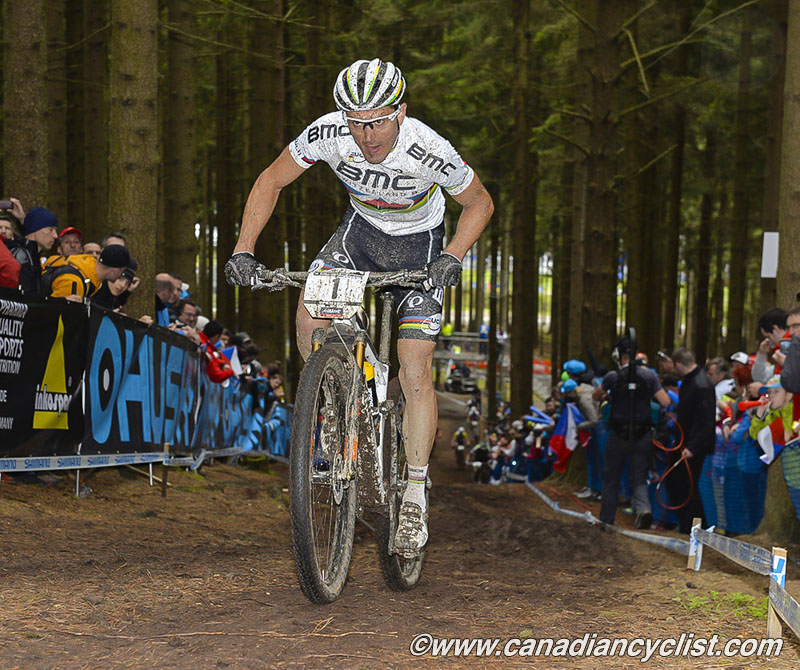 It took Absalon a while to get rolling, but he soon distanced all chasers to take 3rd.

"It was a very exciting race between me and Nino (Schurter) again," agreed Kulhavy, "and I attacked on the hardest climb and Nino stayed with me maybe 5 or 10 seconds before I got away.  Then I just controlled my position to the finish.  The finish was good and I didn't make any mistakes.  The fans were so amazing.  They helped a lot and pushed me. It was crazy. I would like to say thanks to them."

Raphael Gagne (Canadian National) started very strongly, and was riding into the top-10 on the first lap, however, he admitted afterwards that he probably went out too hard.  He also had a series of crashes mid-race which pushed him back to the 30s, before recovering to finish 26th.  [Note:  We have an interview with Raph here]

Derek Zandstra (Scott 3Rox) was the top Canadian of the day, finishing 23rd; his best-ever European World Cup result.  Zandstra decided to start a little slower, and it worked as he made his way up steadily through the field.  [Note:  We have an interview with Derek here]


Earlier in the day, Lars Forster (Wheeler - IXS) won the Under 23 Men's race and the Leader's Jersey, finishing 17 seconds ahead of Spain's Pablo Rodriguez, with Andri Frischknecht (Scott-Odlo) taking third.  Peter Disera (Canadian National) was the top finisher, in 26th after a sprint.  [Note:  We have an interview with Peter here]