The thirty year anniversary of the Philadelphia International Cycling Classic was a special one for the Orange & Black of Optum, with both the men's and women's teams placing a rider on the podium atop Philly's infamous Manayunk Wall. Mike Woods hammered up the Wall on the last of eleven laps in the men's race, outdistancing all but one rider, Carlos Barbero Cuesta of Spain's Caja-Rural team. 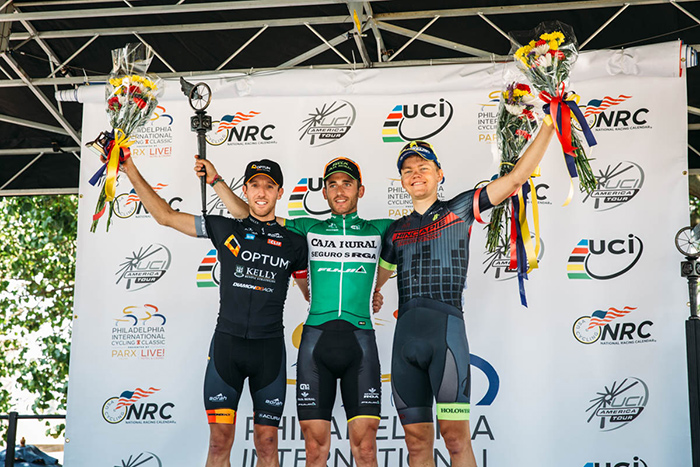 "It's days like today that, even though we didn't win, it makes me very proud to be a part of this team," said Men's Performance Director Jonas Carney. "The team worked together all day, and in the end Woods and Guillaume Boivin showed some serious tactical savvy, recognizing a key split and then driving the pace to make it to the line. we love to see efforts like this out of our athletes."

Jasmin Glaesser worked herself into a solo breakaway over the first several laps of the women's race, chalking up enough points to open a gap in the Queen of the Mountains competition. After her solo breakaway was absorbed, she continued to smartly capture more QOM points, sealing up the competition and it's $5,000 prize purse before the final lap. 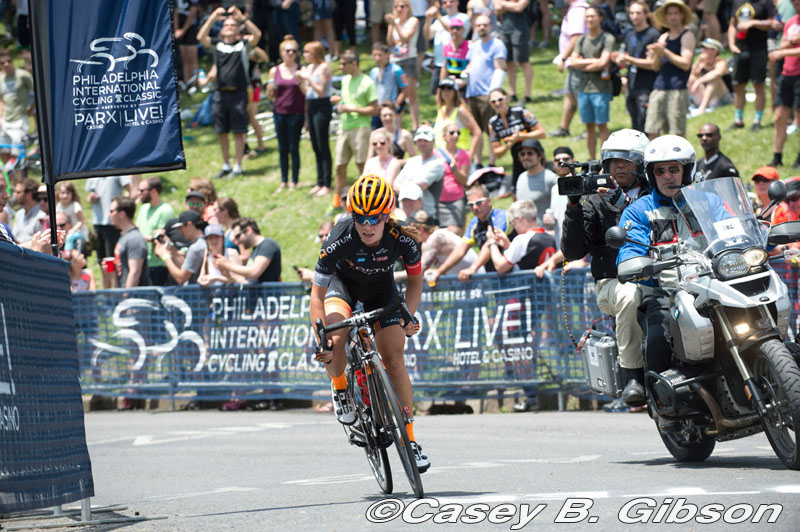 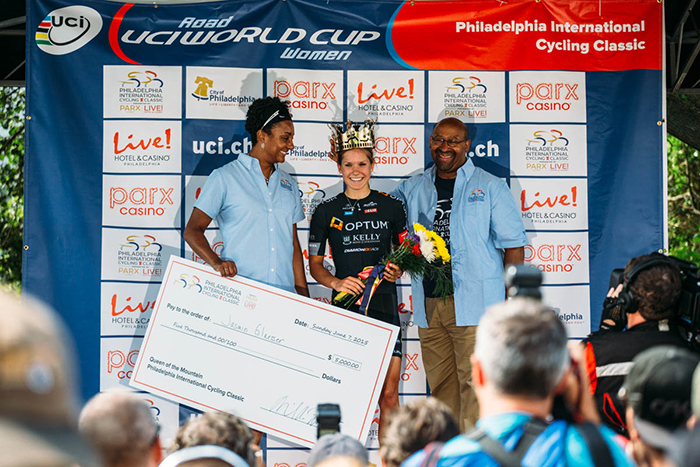 "Today we showed the quality of our team at a World Cup event," said Women's Performance Director Patrick McCarty. "We stayed in contention throughout the race, winning the QOM and launching a decisive attack in the last 500 meters, putting 3 riders in the top ten. Everyone wanted a better result in the finale, and we can critique the performance but we can't complain - ultimately, I'm happy with how we rode today." 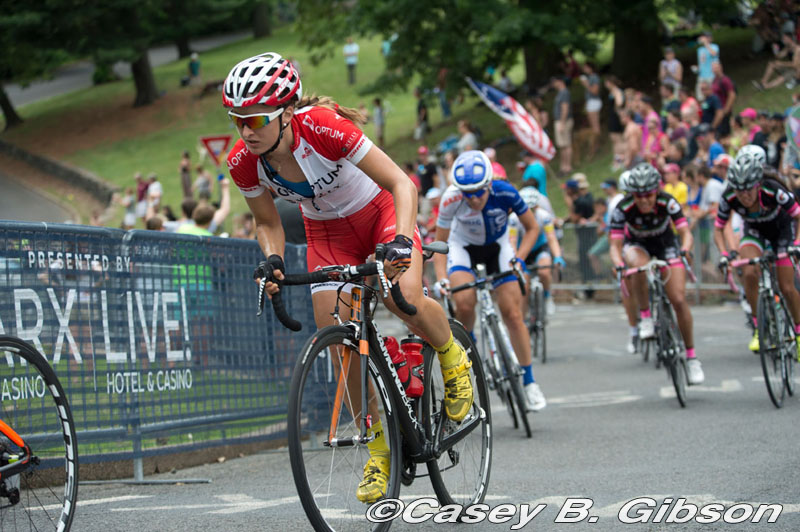 Although short of the podium, the women placed three riders in the top ten at the Philadelphia Classic, the first Women's World Cup race in the United States since 2001. Leah Kirchmann and Lex Albrecht finished 7th and 8th, and Brianna Walle rounded things out in 10th. It was a watershed moment for women's cycling in the U.S. for many reasons - World Cup status, equal prize money, and a prime time, afternoon start with live television coverage broadcast around the world. The final podium was all international - Great Britain, Italy, and Belarus, but North America has six riders in the top ten, aided by the trio from Optum p/b KBS.

Woods' chance at the top step of the podium came thanks to a smartly managed race by the team over the majority of its winding, undulating 173 km route. Each of the eight rider roster played their role accordingly during a race that accelerated to top speed quickly - it was the first sub-200km race in Philadelphia's storied history of its one day race bookended by the hard climbs on the Manayunk Wall and Lemon Hill.

The decisive moment of the day came when a 15-man breakaway went clear on the penultimate climb up the Wall, initiated by an attack by Airgas-Safeway's Chris Horner and towing with it some serious threats for the win. Significantly, the breakaway did not include two-time defending champion Kiel Reijnen (Team UnitedHealthcare), giving other teams in the move added incentive to ratchet up the pace significantly to keep the dangerous Reijnen out of contention for the three-peat.

Woods' countryman Guillaume Boivin was exceptional from the breakaway over the final lap, keeping the gap wide all the way to the base of the final trip up the Wall on the way to the finish line.


Mike Woods
"The team support was awesome today, but particularly from Boivin - he was amazing. If it wasn't for him, the breakaway wouldn't have survived and I likely would not be on the podium. It was a phenomenal performance. He was on the front of the race for almost the entire last lap, and just drove it. Over the last 2 or 3 km I could hear him moaning he was going so hard. On the final climb to the finish, I was going hard enough to drop everyone except the Caja Rural rider. I looked behind me and saw him staying on my wheel and I hesitated a bit. In retrospect, I should have kept the pressure on because that was the only chance I had at beating him. When I eased up he hit out hard and I wasn't able to close the gap, but I am still happy with the performance."

Jasmin Glaesser
"The plan was for me and some of the other girls to be aggressive immediately and try to get into an early break. I didn't expect to be out there by myself, and it wasn't ideal, but when that kind of situation develops you have to take advantage. I shot for points but also tried to save energy to help position Lex, Leah, and Brie for the finish. Getting the QOM is a great bonus for the team - it's nice to share something for our efforts today."

Lex Albrecht
"This year was my 5th time racing the Philly Cycling Classic. It has always been my favorite race of the season. The course is beautiful, the fan presence is spectacular, and the race is always challenging. Having 3 riders in the top 10 at a World Cup race is a pretty big deal. Especially when it's the only World Cup race in North America. All of the best riders are here, and it gives us an extra boost of confidence going into the Aviva Women's Tour of Britain. We leave next week."