Paxson reels back lost time and Nash wins despite a missed turn on the Sunshine Coast.

Caked in dust with sweat dripping down their brows, the racers of the BC Bike Race are fully engrossed in an epic odyssey. Today's Stage 3 from Earls Cove to the seaside town of Sechelt was the longest of the week with an opening climb that challenged the rider's belief there would be an end. The sawtooth profile of the day stair-stepped it's way with punchy climbs and short descents before culminating in a plunge down the Feature Trail, VFR towards base camp in Sechelt. 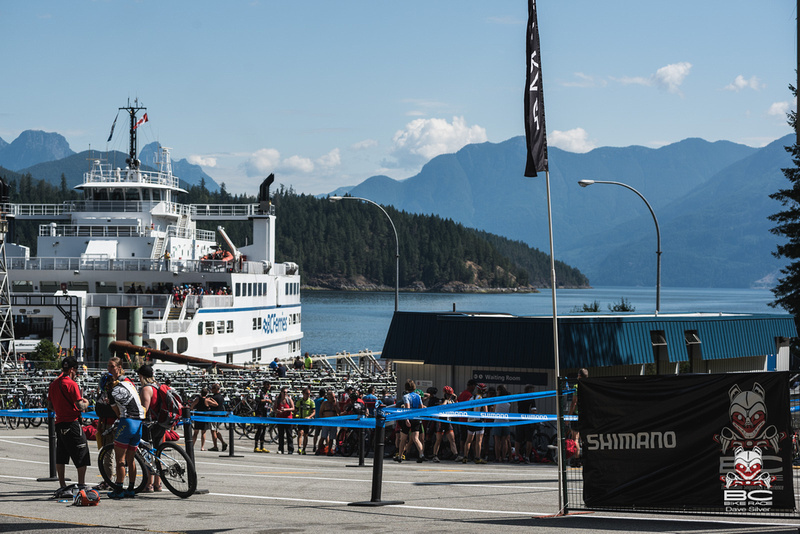 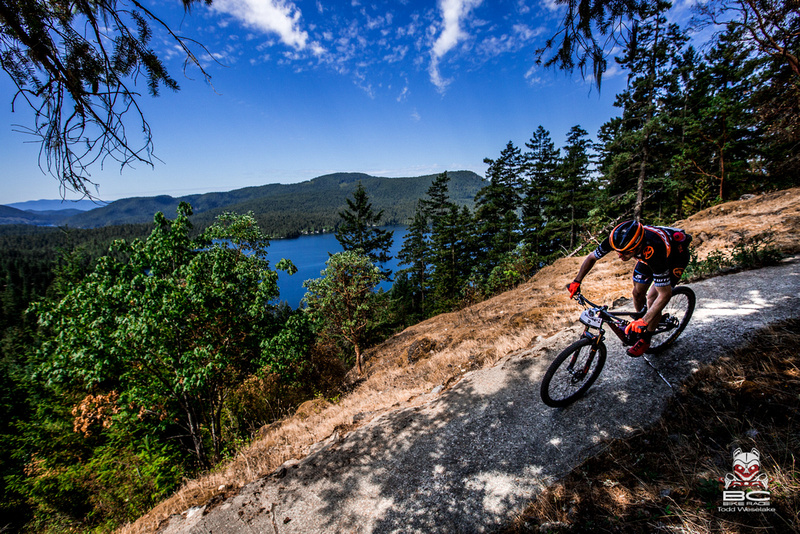 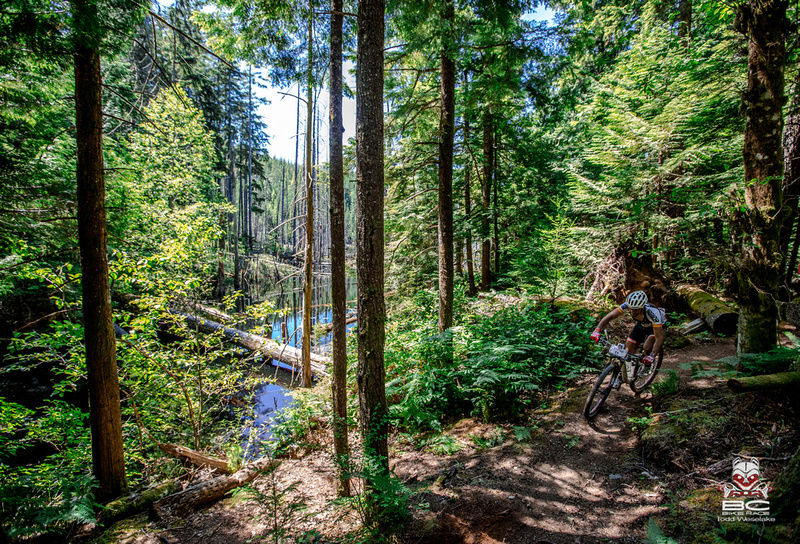 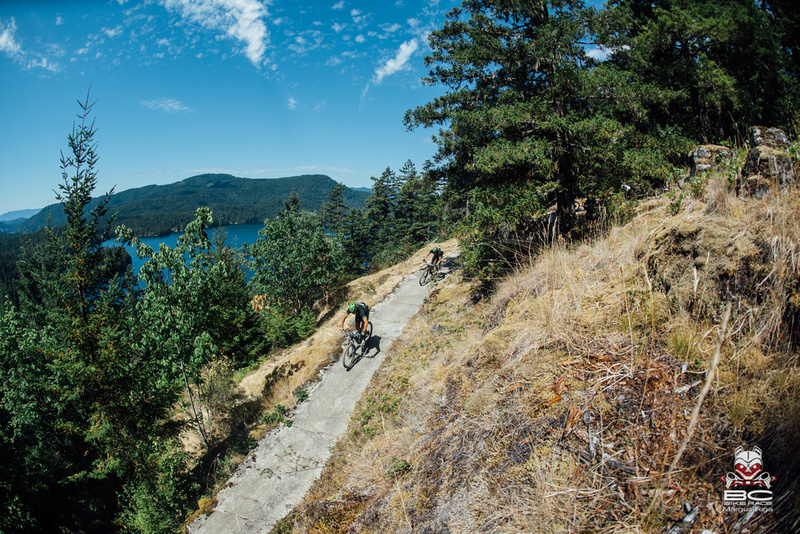 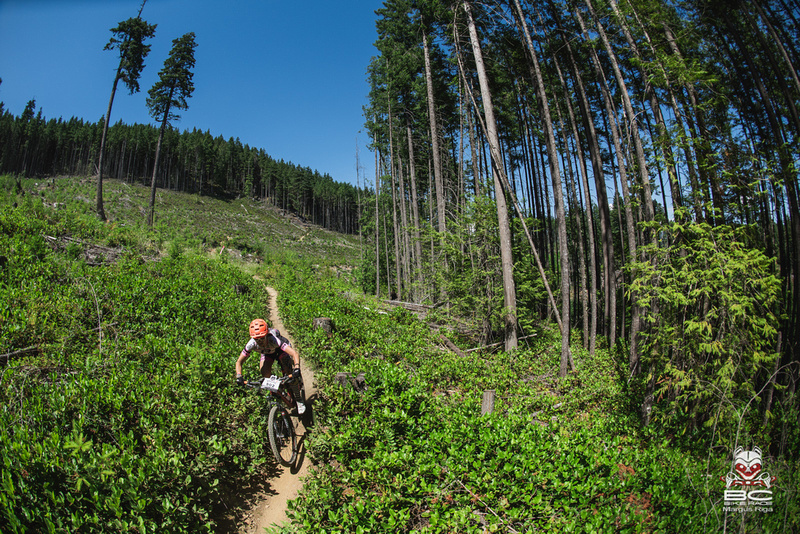 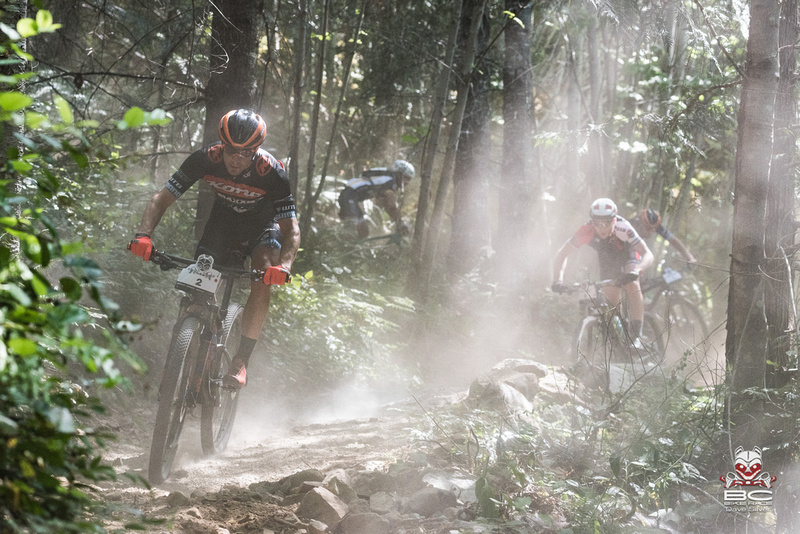 Like needing to meet someone three times to get to know them, the riders are starting to realize they are riding daily amongst the same general group of riders. Friendships are being formed over shared vertical misery and downhill flow. Common is the unique equilibrium of the balance between the climbers who can't descend and the descenders who don't like climbing, this often creates mutual appreciation for each other's ability. Two different skill-sets that create a bond of appreciation, understanding and the sharing of trails, as well as a little envy for better descending skills, or desire for cooler lycra on these hot days.

Solo Women: Katerina Nash manages a setback and Rebecca Hodgetts takes second.
Naomi Dalle, Toronto: "There are moments of pure ecstasy and moments of pure sufferfest. It goes back and forth but at the end of the day it feels awesome. We signed up because we met people who said this is the best bike race they've ever done." "We've discovered it's super well organized, well put- together, and logistics are amazing. We don't have to think at all, it's awesome!"

The Earls Cove to Sechelt day has a reputation for being hard mostly because of it's opening climb out of the BC Ferries terminal up to the Suncoaster Trail. Katerina Nash (Luna) created her race strategy based on the desire to pull back a little from the previous two day's opening efforts and save some energy going into the final four stages of the event.
"I wanted to stay fresh and not push it too much like the first two days. I really enjoy the singletrack and the pacing is good." said the Czech passport holder who recently moved to the Bay Area in California after 14 years in Tahoe CA.
Despite her plans, a misstep sent her off course briefly and forced the strategy to change slightly.
"Things were going really good and unfortunately I took a wrong turn. I Started chasing because I didn't know who was ahead you know. It was kind of interesting from that point on."

First time BCBR participant Rebecca Hodgetts went off course just long enough for Nash to slip by which created confusion for Nash who thought she was still in second place all the way to the line. Vicki Barclay (Stans NoTubes/ Bike Flights) also made a similar error while following other riders. It was a tough day of reminders for racers to keep their heads up and stop when they don't see the BCBR pink ribbons.

Though Nash is managing to increase her overall lead, today proved that the unknown plays a big part in the daily race. Hodgetts has an 8 minute lead on Barclay, but as the heart of the race days arrive it's still a race for second with an eye always on first.

Solo Men: Paxson takes a return on deposit for the time he lost in Powell River and closes the account in one calculated grab. Sneddon Takes overall in hometown.
Spencer Paxson (Kona Bikes) quit his job last year as an energy analyst in order to focus on racing full time. A self described nerd for numbers, Paxson calculated that a 4% effort above that of his competitors would return the eight minutes he lost the day before, the day when he missed a turn with his head down, squeezing the sweat out of his helmet. Obviously, a penchant for numbers helps, but it's a reminder that the little unexpected pieces of dust can jam-up the most engineered craft.

"I'm pretty thrilled to have gotten back the time. I tend to nerd out on stats. I figured if I ride 4% faster on a 2:50 hour course I can get back almost all my time. It was a combination of knowing myself and being confident and feeding off the gap during the day." Paxson epitomizes the careful balance an athlete needs to maintain between strategy informed by numbers and trusting knowledge of self. The ability to internalize how an effort feels and correlate it to a measuring system is central to his success. Many people tend to get lost in the measuring devices attached to their bikes, but Paxson maintains perspective and always throws in the joy of riding the bike as a central component to his riding. At the end of the day Paxson managed to take back all but 50 seconds of the 8 minutes he lost the day before.

The only rider to try and challenge Paxson's initial move up the Suncoaster Trail climb was yesterday's stage winner, Tristan Uhl (Competative Cycles). His effort was short lived and he quickly settled back into the chase group. Second through fifth place finished within the same minute giving Sechelt native Kris Sneddon (Kona Bikes) the overall by 10 seconds. He may have had an unfair advantage on the descending trail to the finish line as it was one he built as a 9 year-old boy.

Sechelt Native Sneddon takes overall lead
Kris Sneddon is one of the Golden son's of the Sunshine Coast. His father worked in the timber industry and from an early age he was building trail for and with Kris. Despite having a small population with the greatest percentage of residents over the age of 65, Sechelt has managed to incubate mountain bikers in a small supportive environment that affects the rest of the world. From the XC trails used by the BC Bike Race, to the Coastal Gravity Park and the stomping ground of Brandon Semenuk the Sunshine Coast has influenced the rest of the world's mountain biking evolution. Sneddon has spent his years with his feet and hands on the dirt of the region and his humility of his accomplishments doesn't hide his passion for the trails and the community. 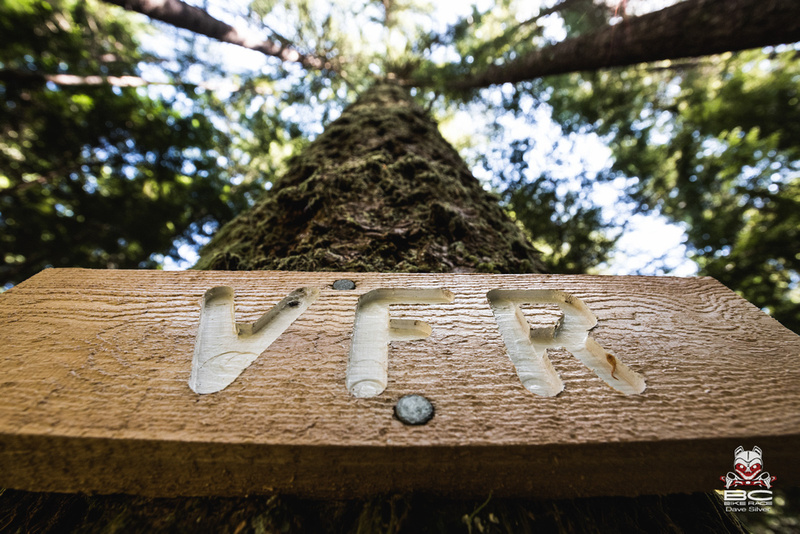 Feature Trail: VFR (Visual Flight Rules)
In 1952 a small aircraft caught in a winter storm flew into the side of a mountain. 50+ years later the Sunshine Coast United Mountain Bikers (SCUMB) took action to reroute an upper piece of the Adnonoc trail that had been logged. Getting to the VFR requires a steep, technical and undulating climb on a forested side-hill. Making the climb without a dab is a feat in itself, so the reward is two-fold at the top if you manage to clean the climb and nail the fast and loose descent. The descent changes from dry and open wood cuts, to trails darkened by the canopy, loam, and a heavy overhang of ferns in the lower sections. Despite lacking a machine built feel in the woods, its the passive use of natural features such as roots, old stumps, and worn exposed rock that lies in wait for a rider to choose lines and interpret the flow they want.

Riders of Note: Jez Scarrett
The first thing you probably notice about Jez Scarrett might be his sideways glance that follows some dry wit we would expect from an Englishman as portrayed in your favorite British comedy. From the way he rides and his dogged approach to tackling an event like the BC Bike Race for the second time, it would be easy to overlook that fact that he is riding with a prosthetic leg. If you saw him in the BC Bike Race movie Seven from 2013 you'd notice his natural flowing stance on the bike and his adaption to the device was so fluid it's easy to realize Jez doesn't let his loss of a limb define him. His military past still emanates from his square features and direct confrontations of the limitations of the leg that begins below his knee.

I talked to him again this year after we met in 2013 when he managed to finish 16th in the Men's Veteran Category. At the line today he came in with more pep than you might expect of someone who had been out on course for five and a half hours. He attributed it to popping a gel and the adrenaline of passing about five riders on the final descents of the race.
"Today was really really hard, I was fitter last time and I didn't have bad shoulders. I've got bad shoulders this time, so tomorrow may be a day off." He said without a strong hint of disappointment, and anyone who has read the rules of the Art of War understands there is no loss in confronting your limitations, it's ignoring them that leads to defeat.
"When descending I'm having to hold on tighter because of the nerve damage."

Despite feeling less fit and having issues with his shoulders, he has been using his experience from the 2013 race to get him through this year of high heat. The prosthetic attachment doesn't allow airflow and gets really hot on the part attached to the remaining part of his leg so he choose to ride without a hydration pack and just carry two bottles. "I don't even have a number on my back because that won't allow it (the shirt) to breath."

We're glad to have Jez back, pursuing the finish line with a determination taken for granted by most of us.