Rigoberto Uran (Etixx-Quick Step) gambled and won at the 6th edition of the Grand Prix Cycliste de Québec, ahead of two of the best sprinters in the world, Michael Matthews (Orica-Greenedge) and Alexander Kristoff (Katusha). The first Colombian to win either of the Grand Prix Cycliste de Québec races, after finishing third in Quebec in 2011, Uran made the best of the work done by his super-strong Eitxx-Quick Step team to clinch his biggest victory of the season. 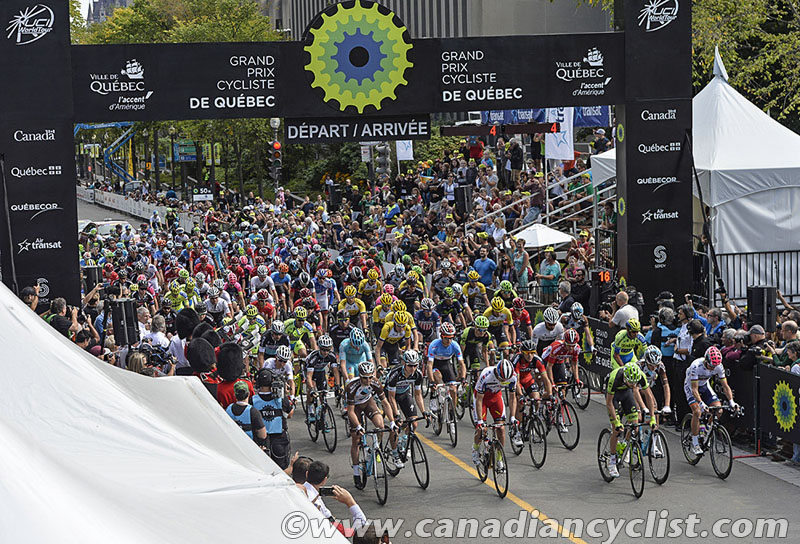 Ryder Hesjedal (Cannondale-Garmin) was the top Canadian in 16th place, part of the small chase group that finished right behind Uran. Team Canada had a strong performance, with Ryan Roth and Adam de Vos in the race-long break, and with Roth winning the KoM award. Roth went clear six kilometres into the race and was only caught with a little over a lap to go, spending approximately 180 kilometres at the front of the race.

136 riders started the 6th edition of the Grand Prix Cycliste de Québec. Attacks began immediately, notably by Lieuwe Westra (Astana), but the day's break took shape at kilometre 6, when two Team Canada riders, Ryan Roth and Adam de Vos, broke clear with Cesare Benedetti (Bora Argon), Perrig Quemeneur (Europcar), Wouter Wippert and Darren Lapthorne (both Drapac). The peloton was content with letting the six go and the gap increased quickly to reach a maximum of 9:10 by kilometre 31. Involved in an early crash, Bernhard Eisel (Sky) was the first rider out of the race. 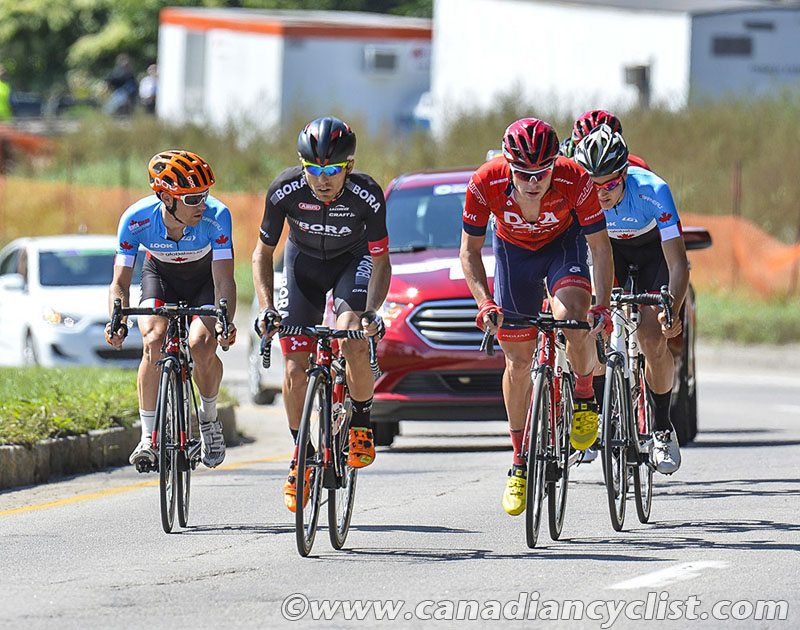 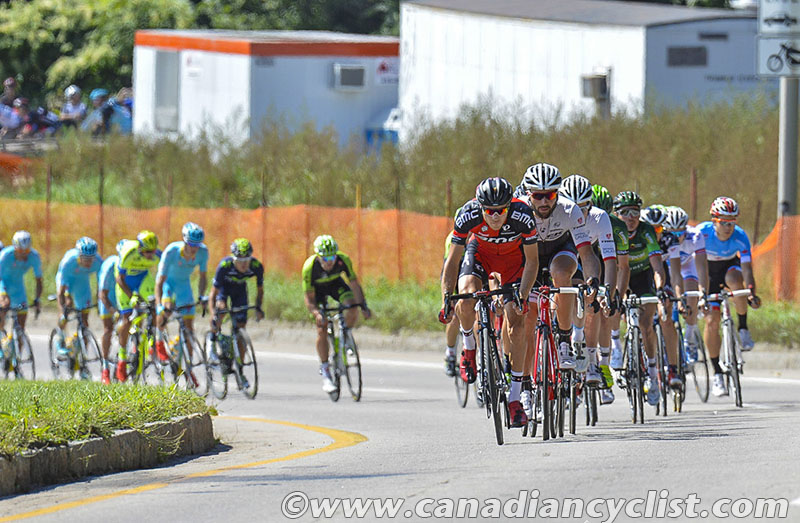 The break allowed Adam de Vos to collect the early points for the KoM classification on Cote des Glacis, as they worked together to extend their lead.

"Our goal was to put someone in the break," explained Roth. "Adam got in there, and then I had the opportunity to bridge across. Adam was collecting the early points, but later in the race, when the climb was worth more points [and de Vos had been dropped], I decided to go for it."


BMC and Trek Factory worked to keep the lead within reasonable limits as Wouter Wippert was dropped by the leading group after his chain snapped.

In the 11th lap, Wippert's team-mate Lapthorne was also dropped by the breakaway group, whose lead had shrunk to under two minutes. One lap later, Benedetti attacked on Cote des Glacis, splitting the front group. Only Ryan Roth managed to stay with him but their lead had melted to 40 seconds in lap 13 as the peloton was starting to become jittery.

In the 14th lap, Lars Bak (Lotto-Soudal), Viacheslav Kuznetsov (Katusha) and Brent Bookwalter (BMC) joined Roth and Benedetti, with Benedetti getting dropped on the climb. 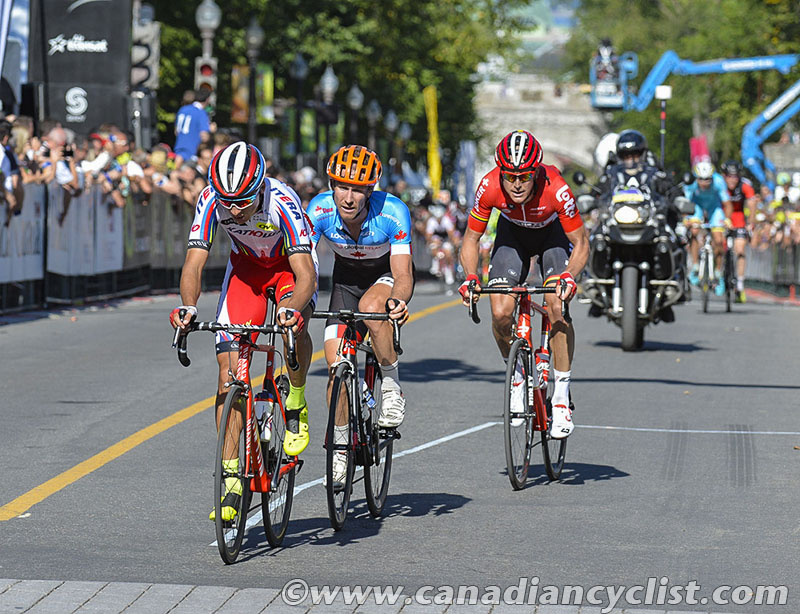 The group was caught but Bardet and Alaphilippe kept attacking at the front of the bunch. Jakob Fuglsang (Astana) and Wilco Kelderman (LottoNL-Jumbo) jumped away and entered the final lap with a slim 15-second lead over the pack. Former winner Robert Gesink (LottoNL-Jumbo) attacked on the last climb before Greg Van Avermaet (BMC), twice a podium finisher here, tried to shake off the peloton in the last stretch, but after he was brought back, Uran countered. Heading up the long false flat run to the finish on Grande Allee no one wanted to be the first to chase, making Uran's gamble pay off. Michael Matthews just nipped ahead of Alexander Kristoff at the line for second. 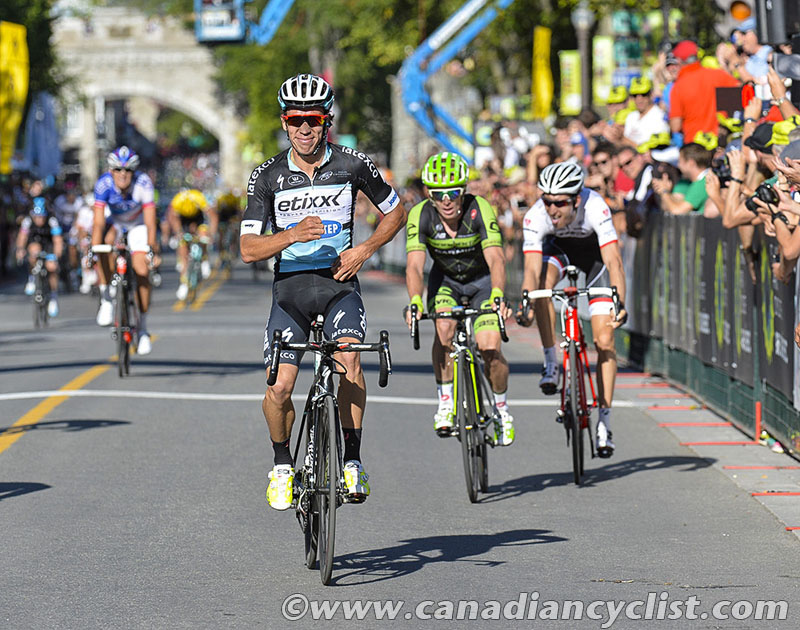 Rigoberto Uran: "We had a very strong team at the start, with Kwiatkowski or Alaphilippe, and our plan was to get to the last kilometre and go from there. That's what we did. It worked and I'm very happy. It was, of course, an advantage to have so may contenders in the team."

"For me this is a big relief after a season that was a bit unlucky, with a lot of small problems," Uran continued. "But I never gave up. After Le Tour de France I said 'ok I have to keep the concentration and effort up'. I worked hard to be ready for this point of the season, and the result is there with a victory. I knew this race well, I was 3rd in 2011. I knew with this parcours that there is a chance to anticipate in the last kilometre, and I did it. I kept going on, gave everything and I won. Now I know for sure the condition is there."

"On Sunday we have another race, but on paper it is a little less selective than today in Québec so there is less chance for me to do well. But I am confident in my sensations, and also confident in my teammates who arrived with good motivation. These are strong guys who arrived physically ready, and it showed with how we attacked in the final kilometres. After these races in Canada we have the UCI World TTT Championship coming up in the next days, and then there is the UCI World Individual Time Trial Championship. So, there is a lot of room to keep doing well for the team. It'd be nice to do well in the TTT. We'll see, but for now I'd like to enjoy this victory."