One of the most exciting women's world championship road races in recent history came down to the wire on Saturday in Richmond, Virginia, with Lizzie Armitstead (Great Britain) outsprinting Anna van der Breggen (Netherlands) for the title, with Megan Guarnier (USA) taking third.  Canada had a very strong race, with four riders still in contention on the final lap, and Joelle Numainville just losing the sprint for tenth in the chase group, followed by Karol-Ann Canuel in 13th.  In the Junior men's race, Felix Gall (Austria) took the title, barely holding off Clement Betouigt-Suire (France) at the line, with Derek Gee the top Canadian in 45th.

Despite forecasts of rain, the day remained mostly dry, with the Junior men getting a few damp laps that caused some crashes on the cobbles before it dried up for the finish.  The women's race was dry all afternoon.  Both categories raced eight laps for 129.6 kilometres.

Junior Men
Despite multiple attacks, the Junior men's race kept regrouping, especially when the wet cobbles took down the leaders a couple of times.  The field steadily thinned, whittled down by the three tough climbs in the final five kilometres of each lap.  It wasn't until the final two laps that a group of 14 formed at the front, and then Gall made a gutsy move to take the lead before the climbs, opening a gap of 15 seconds as the chase dithered behind. 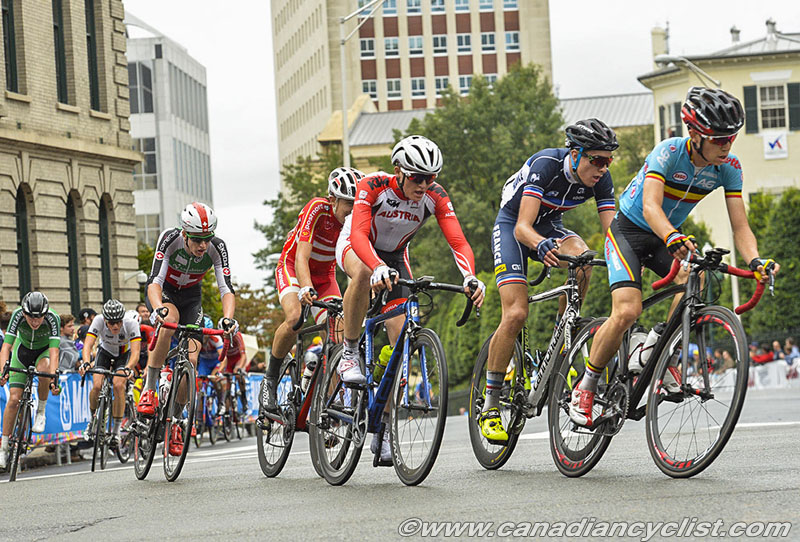 Finally, Betouigt-Suire and Rasmus Pedersen (Denmark) took off in pursuit, literally catching a fading Gall at the line.  Betouigt-Suire desperately threw his bike, popping a wheelie, but it wasn't enough. 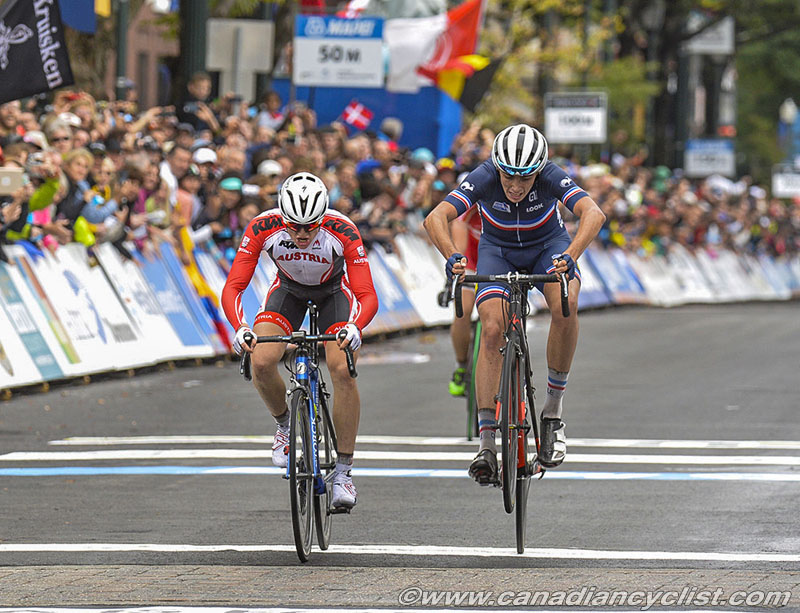 Derek Gee had a bad start, crashing in the first 100m when the road narrowed.  He was quickly up and back into the field.  With two laps to go, both Gee and Willem Boersma were still with the main group, but didn't make the front when the split happened before the start of the last lap.  Gee finished 1:12 down, with Boersma at 3:29 in 73rd.  Joel Taylor was 104th and Adam Roberge did not finish. 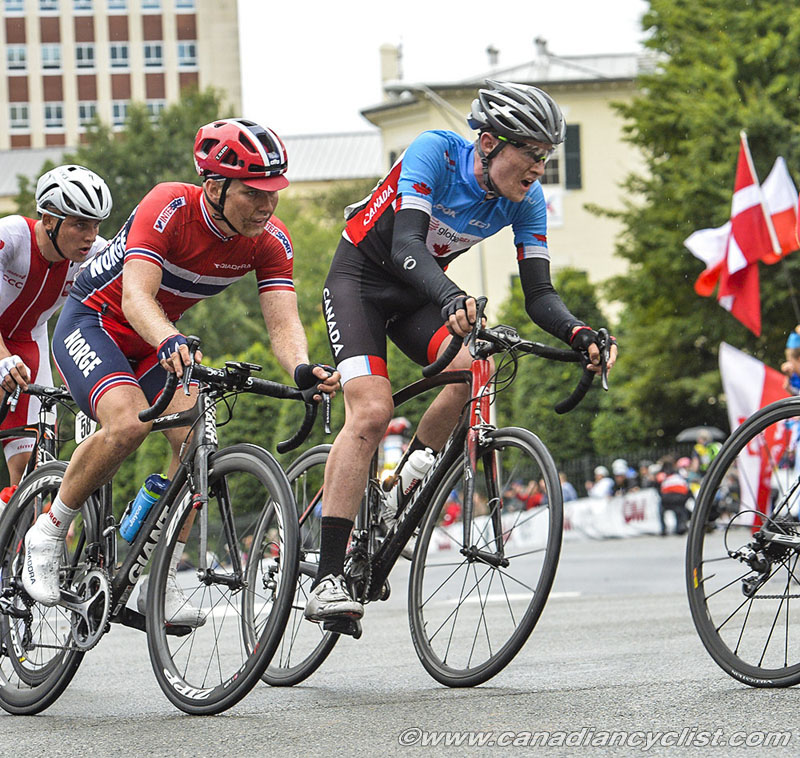 Willem: "The race was such an incredible experience and it was very hard. Right from the start it was all out and every time we hit the second part of the course it really ramped up. All in all, super happy with how I rode and super happy to be selected to take part in such a prestigious race."

Joel: "Super hard day on the bike today, but such an incredible experience. Thank you to everyone who helped me get here."


Elite Women
The women's race never let up, with attacks always brought back before they could establish themselves.  Each effort would result in one of the top teams going to the front to pull it back, with the high tempo steadily reducing the size of the field.  It was only with a little more then two laps to go that a group formed off the front of the peloton, containing Coryn Rivera (USA), Audrey Cordon (France), Lauren Kitchen and Rachel Neylan (both Australia), Emilia Fahlin (Sweden), Valentina Scandolara (Italy), Amy Pieters (Netherlands), Romy Kasper (Germany) and Malgorzata Jasinska (Poland). 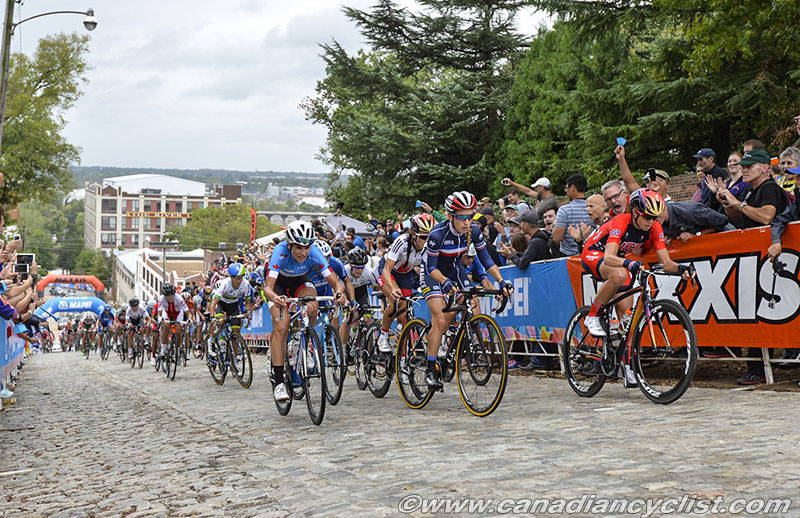 This group quickly went a minute up as no one in the peloton was willing to chase initially.  Jasinska then attacked on her own and the rest of the group began to disintegrate under the pressure of the chase, while Australia and Germany start to ramp up the pace in the remainder of the peloton. 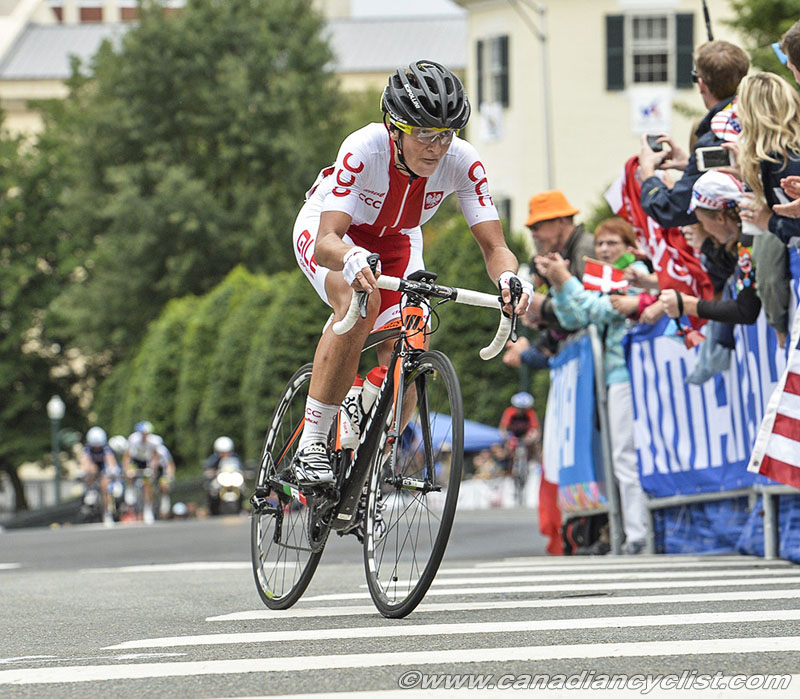 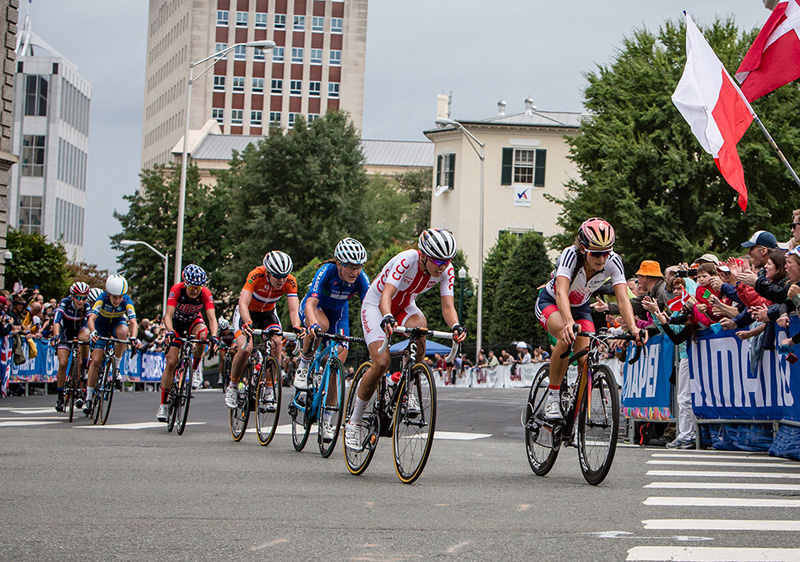 Armitstead at front as they round the final corner

The bunch caught the remnants of the break at the base of the final climb, with Armitstead leading the front group of nine into the final straightaway and then sprinting from the front to take the title.

Canada had four of its five riders still with the main group as they started the final lap, only missing Denise Ramsden, who had dropped out at the halfway mark due to sickness.  Alison Jackson attacked out of the peloton on the last lap, attempting to bridge up to the leaders and making it halfway across before getting swallowed by the chase.

When the field split on the final climb, Numainville and Canuel made the chase group behind the front nine, finishing nine seconds back, while Leah Kirchmann (32nd) and Jackson (36th) finished with the main group, less then a minute down.

Watch our interviews with Joelle and Alison Here