The reported net (loss) income for the quarter and the nine months ended September 30, 2015 include impairment losses on goodwill and customer relationships related to Caloi in Brazil, restructuring and other costs. As such, the Company is presenting adjusted financial information in this press release as it believes that excluding these items is a more meaningful comparison of its core business performance between the periods presented.

"The third quarter was characterized by another exceptional performance in our Dorel Home Furnishings business as well as continued currency headwinds which affected both Dorel Juvenile and Dorel Sports. To mitigate the currency issues, which amounted to approximately US$14 million in the quarter, both segments are successfully implementing selective price increases and are introducing new products at better margins.  Despite current conditions in Brazil, we remain solidly committed to Dorel Sports' Caloi business. There is excellent market potential with our portfolio of bicycle brands to serve the world's fifth largest population. Our plan is to maximize cash flow while the economy recovers, placing us in an excellent position to benefit once things return to normal," stated Dorel President & CEO, Martin Schwartz. 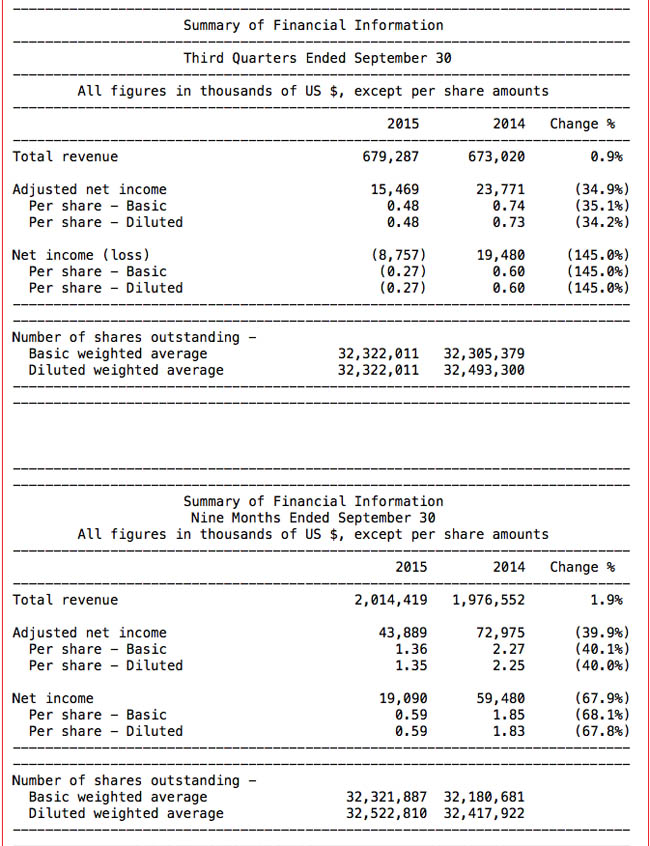 Dorel Sports third quarter revenue remained flat at US$266.5 million, but was up approximately 9% after removing the impact of foreign exchange year-over-year. The main drivers of the increased revenue were in the independent bike dealer (IBD) channel due to increased demand of new model year 2016 higher margin bicycles. Caloi sales grew in Brazil as consumers were attracted to Caloi's strong brand equity in the lower price-point category. Sales of battery powered ride-ons in the US mass market channel continued to increase. Nine month revenue decreased 5.9% to US$746.5 million. Organic revenue increased approximately 2%, after removing the impact of varying foreign exchange rates year-over-year.

Cannondale won a 2015 Eurobike Gold Award for Best Road Race Bike for the new Slate Force CX1. The Eurobike Award is selected by an independent jury of industry experts and is one of the most prestigious design awards in the cycling industry. Cannondale also received the American "Interbike Road Bike of the Year" award for the SuperSix EVO Carbon Force Racing Edition. 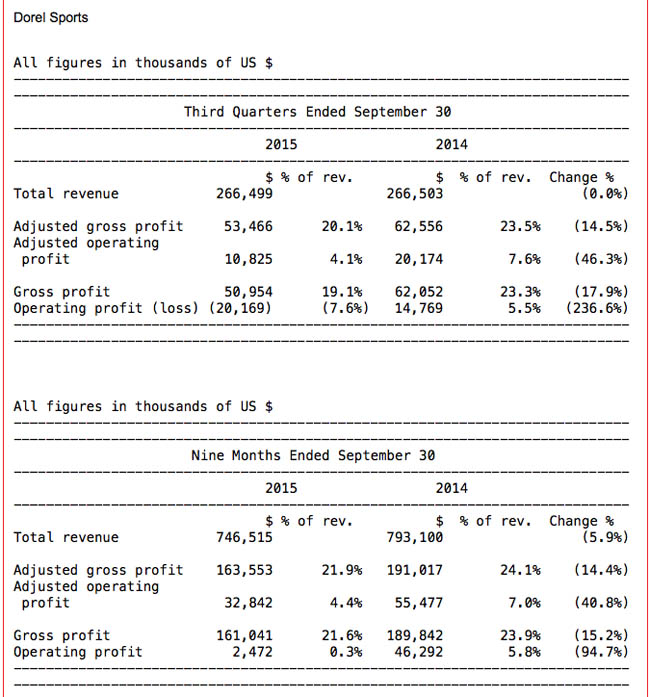 The third quarter includes restructuring charges of approximately US$8.4 million related to both the Dorel Juvenile and Dorel Sports segments and acquisition-related costs of US$1.1 million for the Juvenile segment. Dorel Juvenile has undertaken various restructuring initiatives which will continue over the balance of 2015 and into 2016. The segment will incur a total of approximately US$10.6 million pre-tax in restructuring charges, US$3.9 million of which was recorded in the third quarter. The major component is for severance costs as headcount is being reduced by approximately 700 employees globally, the majority at manufacturing facilities in China. Annualized cost savings of at least US$9.0 million are expected once the restructuring is completed in late 2016.

Dorel Sports recorded US$4.5 million pre-tax in restructuring charges in the quarter, of which US$3.5 million is non-cash, related to structural changes in both the Cycling Sports Group and SUGOI divisions. The SUGOI and Cannondale apparel product lines will be consolidated into a single global apparel portfolio with SUGOI as the primary brand and a move to a SUGOI center of excellence at a new location. An additional US$1.0 million charge is expected to be recorded in the fourth quarter. The restructuring initiatives are expected to be completed by the end of 2015 and will deliver annual cost savings of an estimated US$4.0 million.

In Brazil, as a result of the challenging economy and local market conditions, the rising inflation and the devaluation of the Brazil Real, assumptions on projected earnings and cash flow growth were revised for Caloi resulting in US$26.5 million pre-tax non-cash impairment losses on goodwill and customer relationships in Dorel Sports third quarter results. This situation also resulted in a remeasurement of the Caloi acquisition forward purchase agreement liability amounting to an unrealized gain of US$9.7 million reflected in finance expenses.

"Despite challenges through much of 2015, Dorel Sports will turn the corner in the fourth quarter with increases over last year in both sales and earnings. Considerable changes have been made in the segment, new pricing has been implemented on 2016 model year bicycles and Dorel Sports has launched its largest ever number of new bicycle platforms. These new investments will pay off with the start of a new positive trend going forward. Foreign exchange remains unpredictable, however the segment is in a stronger position to face this issue," stated Mr. Schwartz.