More than 120 people turned out to the annual Ottawa Cycling Celebration dinner on November 20th to raise money for local athletes and celebrate members of the community.

The evening raised more than $3,000 for the National Capital Region Cycling's bursary, which awarded $5,000 to area cyclists this year. The bursary has now given out more than $45,000 since 2000. 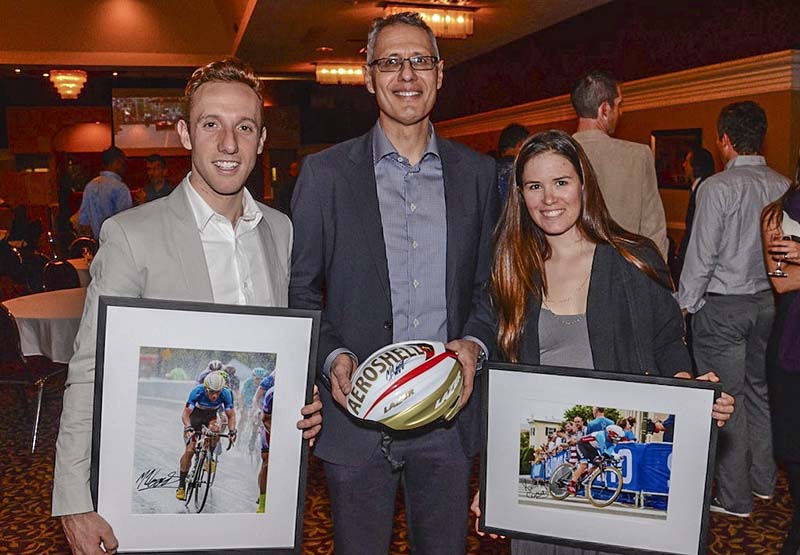 Among the highlights of the evening were an interview with Mike Woods, who will be racing in 2016 for the Cannondale-Garmin team on the WorldTour, and the silent auction. Two auction items alone attracted more than $1,000 in bids, with Joel Katz taking home photos of Mike Woods and Karol-Ann Canuel in action, donated by Canadian Cyclist.

The organizers would like to extend a big thank you to everyone who came to the dinner or offered their support.

Here are this year's award and bursary winners:

Linda Jackson Female Cyclist of the Year:  Katherine Maine
Over the course of the 2015 season Katherine Maine won a dozen road and track events and represented Canada at both the Junior track world championships and the Junior road world championships, finishing 13th in the road race. Among her season highlights were victory in the elite women's Criterium National de Montreal, and four golds at the Canadian Track Championships. For 2016 she will be racing for the Optum Pro Cycling UCI team.

Gord Fraser Male Cyclist of the Year:  Matteo Dal-Cin
2015 was a breakout year for Matteo. Riding for Team Silber Pro Cycling, he won the UCI Grand Prix Cycliste de Saguenay after a bold solo attack in the final kilometres of the opening stage. His strong season also included third place in a stage of the Tour de Beauce and top 10s in both the Tour of Alberta and the Tour of the Gila.

Coach Achievement Award:  Don Moxley
Don Moxley has been coaching Ottawa cyclists and nordic skiers for over 30 years.  Even by his own high standards 2015 was a vintage year, with no less than three OBC Juniors representing Canada at four World Championships and winning multiple national titles. While he is hanging up his stop watch and black vest next year, Don will continue to help his current riders prepare for Junior trials. Don has set the bar against which Ottawa development coaches will be measured.

Peter Tyler Builder of the Year Award:  Vince Caceres
Through his bike shop, The Cyclery, Vince Caceres has been a pillar in his support of local events and one of Canada's top women's teams, The Cyclery-Opus. He founded a small, local bike shop in Old Ottawa South nearly two decades ago and has grown the business into one of the go-to destinations in the region for high-end road and cyclocross kit. In 2016 Vince is stepping up even more by helping to ensure the continuing survival of the Tuesday night criterium series.  [Note:  The Cyclery is a three-time Canadian Cyclist Best Bikes Shops winner]

Alan Large Organizer Achievement Award:  Ross Knight
Every Tuesday night from May to September for the last three decades, Ross Knight has been out at the NRC's Montreal Road organizing the Tuesday night criterium series. Ross also founded the National Capital Region Cycling Bursary in 2000. Since then, the bursary has given out $45,800 to up-and-coming cyclists in the area. Although he's stepping down as Tuesday night organizer over the next year, he is helping to ensure the event's legacy gets passed on to new organizers for 2016 and remains very active in the bursary.

Nine2fivePro award:  Mark Hiscocks
Mark Hiscocks is a regular on the Ottawa cycling scene, fitting in riding when he can between his career in technology and his family role as a husband and father. Cycling is a family affair for Mark, as he caught the cycling bug from his father who introduced him to the OBC time trials at 12 years old. With the support of his wife Amy, these days he can be seen coaching their kids Adelyn and Lucas, at the Eastern Ontario 'Cross series after he wraps up his own race. He attributes his growing participation in the Ottawa cycling scene to the welcoming encouragement of the Ottawa Cycling Community. He epitomizes the Nine2FivePro mantra: finding that balance between real life and life on two wheels.

Ariane Bonhomme: Member of the national Team Pursuit development squad and The Cyclery-Opus team, she is aiming for the 2020 Tokyo Olympics. $1,000 courtesy MEC.

Derek Gee: Stood on the podium a dozen times in 2015, including gold in the national and provincial Junior time trial championships. Will transition to the elite ranks in 2016. $2,000 courtesy the Ride With Rendall Gatineau Park Challenge and the Seenite Criterium Series.

Katherine Maine: Also a Junior in 2015, she has signed for the Optum Pro Cycling professional team in 2016, a remarkable jump for this up-and-coming rider. $2,000 courtesy the Ontario Cycling Association and the Cyclery Tour de France Pool.

Good luck to all of our winners, and we're looking forward to next year's Cycling Celebration!