The threatened rain held off for last night's 40 lap criterium. Twenty-three starters, including 3 new cadets from Courtenay and a couple of independent seniors, lined up for the 7pm start.

Perennial commisaire Peter McCaffery, aided by trainee official Julian from VIU announced that this was to be his final assignment (yeh – right!) and that following tonight's race, he would finally be retiring as a working judge and that future volunteering at MIVA's events would be on an ad hoc basis.

The first few laps of the criterium went at an almost pedestrian pace – quite a change from last week's record speed of over 43kph - but the tempo soon increased as a number of breakaway attempts came from the visiting TAG youth riders and also from Nick Kupiak, Justin Mark (BRBC), James Sage (MIVA) and Daniel Wilson (Independent).

Janna Gillick (ATAC) was also at the front for much of the time and actually took second in two of the intermediate sprints.

The first three primes were won by Kupiak, who was clearly a cut above the other competitors and with 13 laps to go, the Broad Street Cyclesrider finally managed to create a small gap of 9 seconds but he was hauled in within three laps and the bunch stayed together until the final sprint, with independent Tyler McCallen taking the 4th. Prime on the way.

Nick timed his final effort beautifully and crossed the line a couple of seconds ahead of the main bunch, with nearly all the pack posting the same time and only four riders losing one or more laps.

Thanks to our marshals and to those who set out the circuit in the absence of Iain Hay, who is recovering from his nasty crash last week. 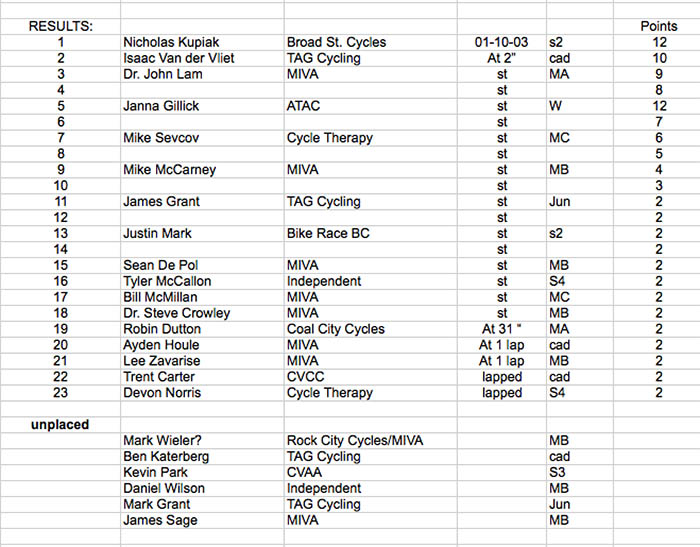