Two Canadians on the Rally Cycling team had strong days at the Tour of California on Thursday, with Adam de Vos finishing second in the men's fifth stage, and Sara Poidevin tied for the lead in the Climber's competition on the opening stage of the women's race.

High above the casinos of South Lake Tahoe, Adam De Vos's daylong gamble almost paid off with the biggest win of his young career. The Rally Cycling rider took a chance on a long breakaway and finished second in the toughest stage of the 2016 Amgen Tour of California. At the same time De Vos was infiltrating the day's breakaway on the 131-mile stage, Sara Poidevin was staking her claim as one of the best climbers in the peloton in stage one of the women's event. 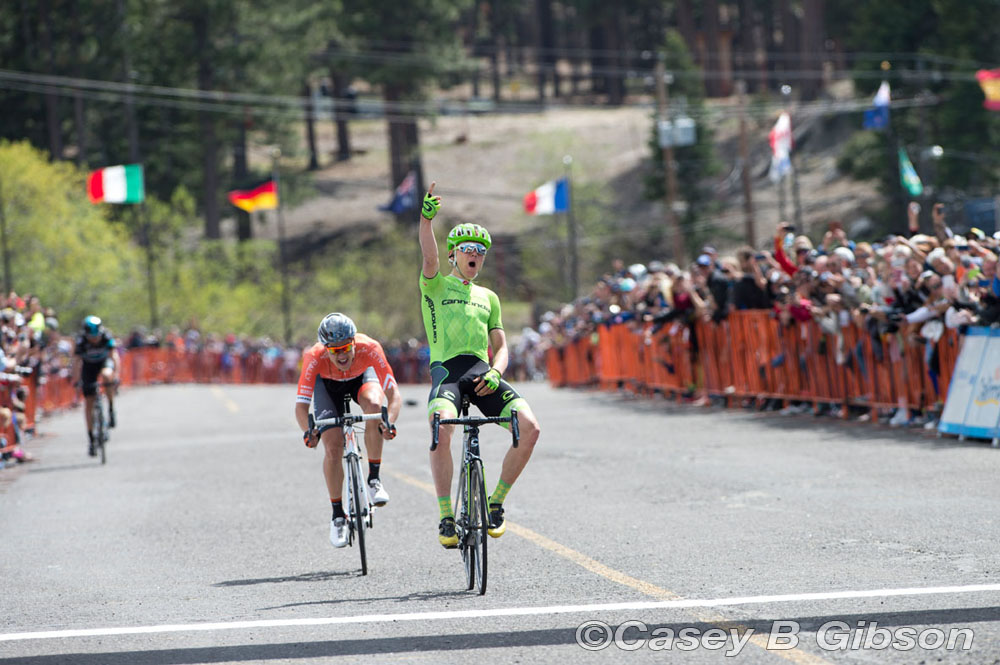 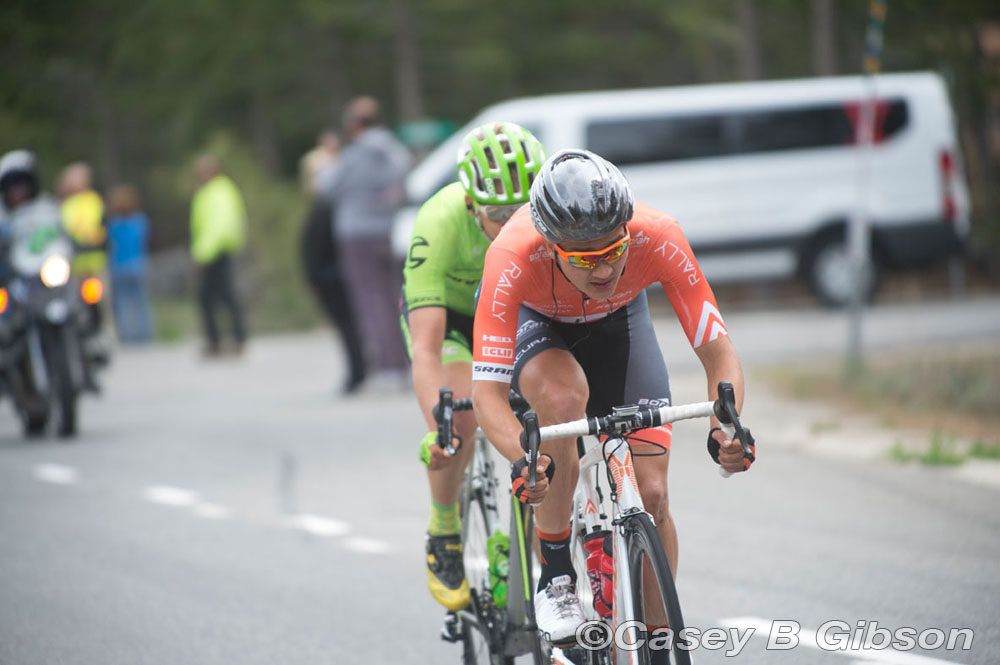 Adam De Vos kept Rally Cycling's breakaway streak alive on the road to South Lake Tahoe. De Vos made it into an early break that included 17 other riders. Despite the large amount of firepower in the move, the peloton held the gap at around the three to four minute mark for most of the day. Heading into the first KOM of the day. De Vos and Toms Skujins (Cannondale) broke clear from the break and fought out the sprint between the two of them. De Vos would come out on top and repeat his performance at the second KOM. Shortly after, the duo were reeled in by the 14 remaining riders of the breakaway.

"I felt pretty on fire today," said De Vos. "Yesterday I was pretty concerned about how the rest of the week was going to go just based on the way I was feeling. That's how it goes in some of these longer stage races, you just never know how your legs are going to be day-to-day. Part of [the reason] for being in the break was to defend Huffman's KOM jersey, so I knew I had to get up there and get the points."

Despite the break coming back together, De Vos wasn't finished and when the breakaway fractured a second time he was in the front group - again with Skujins, this time with Xabier Zandio (Sky) joining them. The three worked well together and with 20 kilometres remaining they had a gap of 3:00. The gap held steady until the final 2-kilometre climb to the finish. De Vos marked Zandio and Skujins coming into the final corner before launching his sprint. He quickly got a bike length on his two breakaway companions but was unable to fend off Skujins, who came by on the outside to take the win.

"I tried to go early on the inside of the last turn," said De Vos at the finish. "I was undergeared when I launched my sprint. It was a fast tailwind finish and I wasn't expecting it to be so flat at the top of the climb. These finishes are tough to judge when you don't get to pre-ride them. I am going to be happy and sad for quite a few days after this one."

"It's brilliant to take the victory," said Skujins. "To get into the break, you have to try at least a couple of times. I knew that the altitude was going to make people suffer, and I knew that even if it wasn't the steepest hills that the race would be blown to bits. It was a good day for the breakaway. I was really happy I could get into the move, and of course, I was happy to take out the win."

In the women's event, Sara Poidevin again showed that she is one of the top climbers in the peloton by grabbing the first Queen of the Mountains points of the race. With only two categorized climbs on the 115.5 kilometre stage, Poidevin was well placed to take the polka dot jersey at the end of the day. On the final climb to the finish Poidevin was gapped from the front group and finished in 21st place. Crossing the line first, Megan Guarnier (Boels-Dolmans) took the win and the QOM points - moving her into a tie for the lead in the QOM competition. As the winner of the stage, Guarnier claimed the leader's yellow jersey with Poidevin wearing the QOM jersey.

"I am tied on points, but wearing the jersey gives me motivation to have it in Sacramento," said Poidevin. "Due to the team time trial, I only have two days to collect points. Hopefully the yellow jersey will be the main focus for Guarnier. It will be difficult to keep the jersey, some of the best riders in the world are here, but we have a strong team and my legs feel good."

Lex Albrecht (Be Pink) was the top Canadian on the stage, finishing 17th, followed by Alison Jackson (Twenty16) in 19th and then Poidevin.  Poidevin is also second in the Best Young Rider competition.

Compiled from Cannondale, Tour of California and Rally cycling reports