Results from the MIVA Coal City Criterium on June 21st in Nanaimo, BC

A small field of 11 riders tonight led to the race being cut to 30 laps.  The first prime was 5 laps into the race with Patrick Burnham taking the first sprint.  The group quickly reformed after that for several laps before James sage went off the front for three laps while the main pack slowly reeled him in.  On lap fifteen Chris Cameron took the second of the nights two primes at which point Nick Kupiak made his move followed closely by Aiden Houle.  The pair rode together for the next five laps until a bad gearing choice left Aiden unable to hold Nicks wheel and he drifted back to rejoin the main pack where Lazarus De Fiore was organizing the bunch into a pursuit to try and reel Nick back in.  While unable to catch Nick his efforts kept the pace strong in the main bunch and kept Nick from lapping the field like he usually does.

Lack of a third prime in the second half of the race meant there were more riders fresh and ready to sprint for second and third place with the main pack finishing six wide across the finish line.

Thanks to our new time keeper Miranda Turner for keeping track of the race tonight and to our Volunteers Glen, Antonius and for Mike and David who brought their wives(I’m so sorry I’ve forgotten your names) along to watch a corner and cheer us on 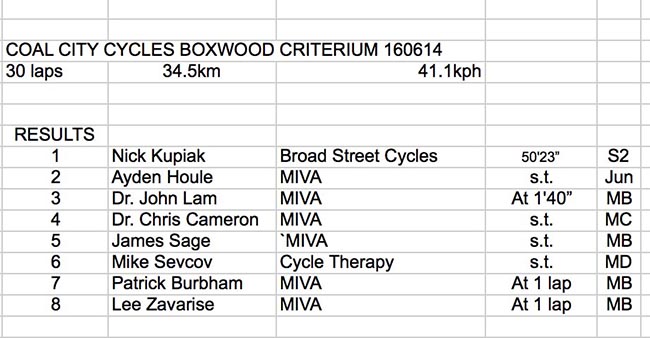