Jean-François Laroche, Regis Cycles, came close to perfection in the sixth stage of Mardis de Lachine, which allowed him to retain the yellow jersey.

Fully supported by his teammates throughout the evening, Laroche won the race in 1 hour 2 min 3 sec and let go a cry of satisfaction and raisied a fist crossing the finish line .

At the last corner, the five-time winner of des Mardis cyclistes was on the wheel of his teammate Charles-André Bilodeau who guided him to the finish line where Laroche beat Hendrik Pineda, Transport Lacombe / Devinci. Bilodeau finished a fine third place after his well-deserved great team work. 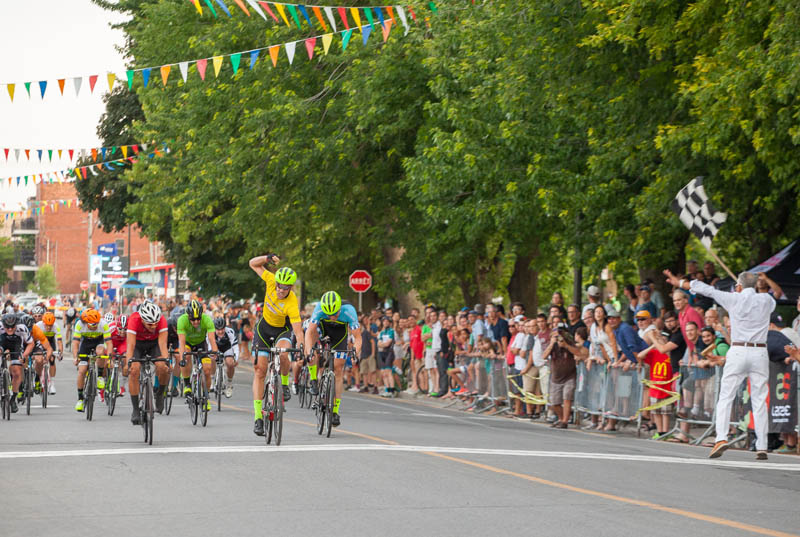 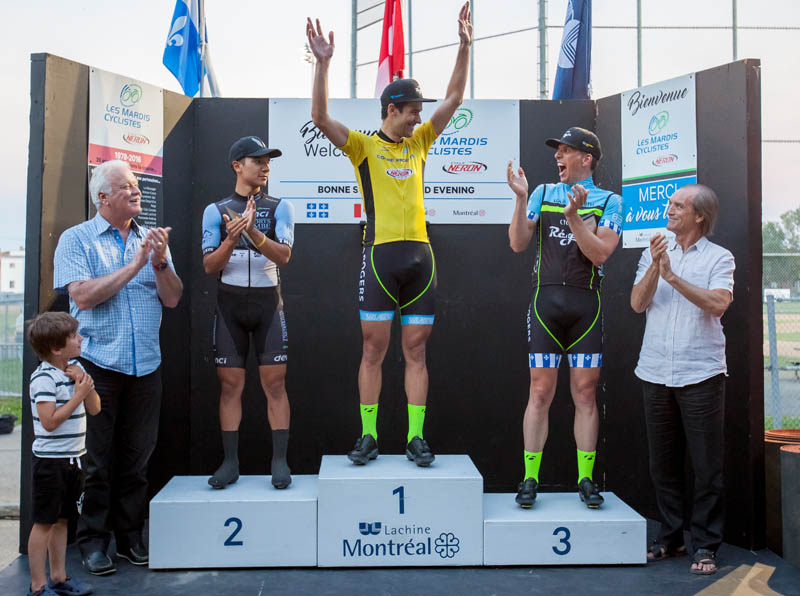 The rider from Cycles Regis won all sprints, except the third when he finished second behind Pineda, which allowed him to accumulate 154 points out of a possible 155. Pineda finished 2nd preventing Laroche and his team's perfect evening.

Team Cycles Regis have established their plan throughout the weeks, in addition to relying on the presence of three-time winner of des Mardis cyclistes, Sébastien Moquin, in their ranks. Laroche could not ask for better.

Laroche's performance allowed him to seize the yellow jersey, and his lead now totals 529 points.

Olivier Brisebois, Garneau-Quebecor absent in the sixth stage, is second with 415 points, seven points ahead Pineda (408).

Laroche chose a perfect night for the win and was hugged by the club's owner, Louis-Yves Cloutier,when he crossed the finish


Young New Zealand juniors invited by Tino Rossi, were fighting the the jetlag of 16 hours, but nothing could dampen their spirit,  they showed they (still) had good legs. They were frequently seen leading the peloton of 133 cyclists, too often for the taste of their technical director. On the penultimate lap, three of the top four riders at the front of the peloton were wearing the "All Blacks' jersey.

"Fantastic, unbelievable, what a race," commented Bradley Leitch. "Extraordinary, we played the elbow at times and it was good fun," for his part mentioned the dashing James Fouche.

"What a great race. It was fast. The peloton really could go. The guys knew how to behave. Congratulations, "praised Batt.

Young New Zealanders will participate next week in the Tour de l'Abitibi, a stage of the World Cup juniors.


In Women's Cup, Raphaele Lemieux, iBike, continued her domination and took another victory.

Lemieux  is atop the standings with 353 points, while Bourbeau is second with 164 points, 10 more than Gagnon.