Team Canada's Guillaume Boivin was the top Canadian finisher on Friday at the Grand Prix Cycliste de Quebec, taking 17th place in the field sprint, won by world champion Peter Sagan (Tinkoff).  Boivin is in his first race back after three months of injury, suffering a broken shoulder in June before the National Road Championships, and then requiring 13 stitches to his knee following a training accident three weeks ago. 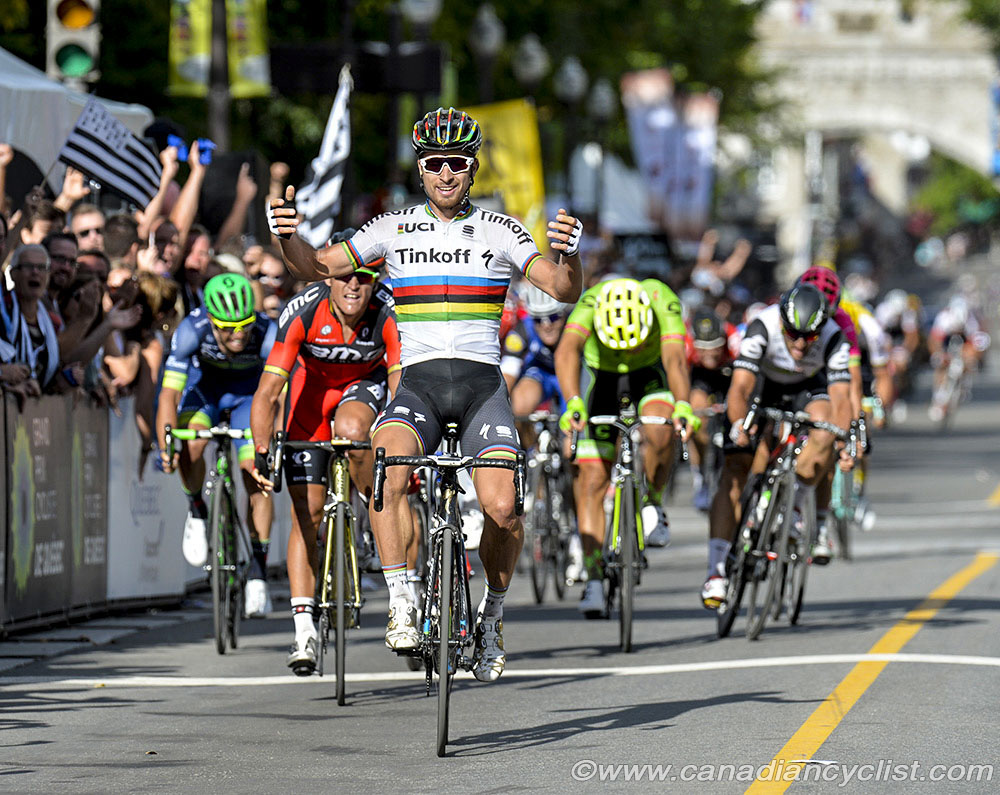 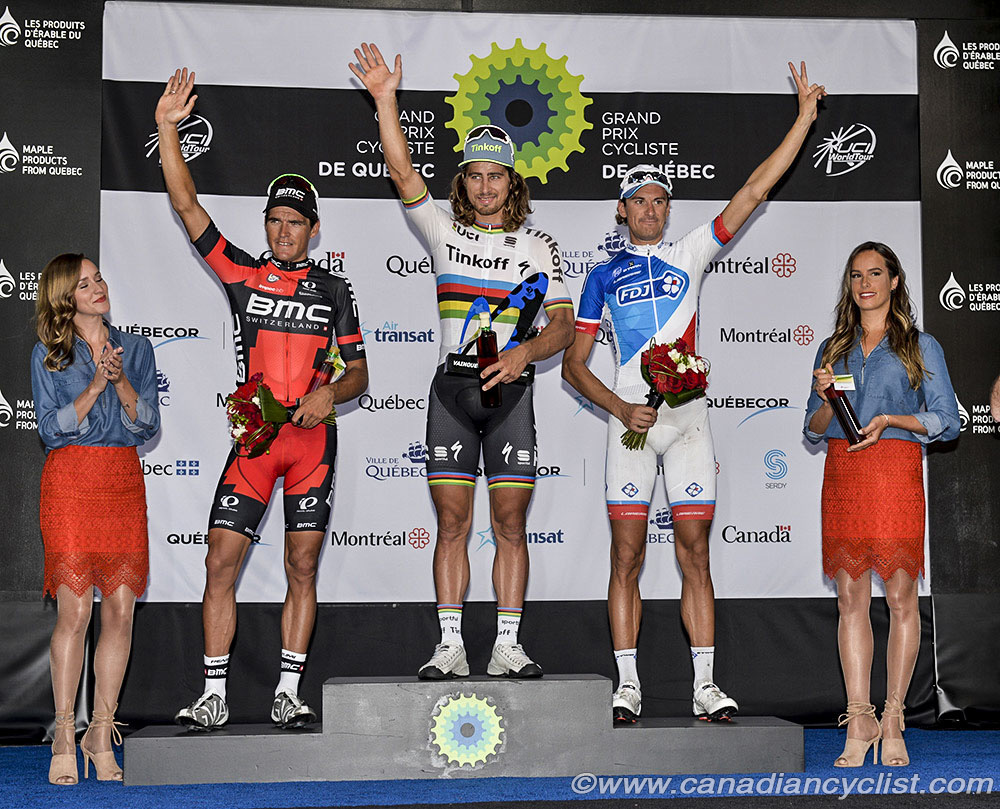 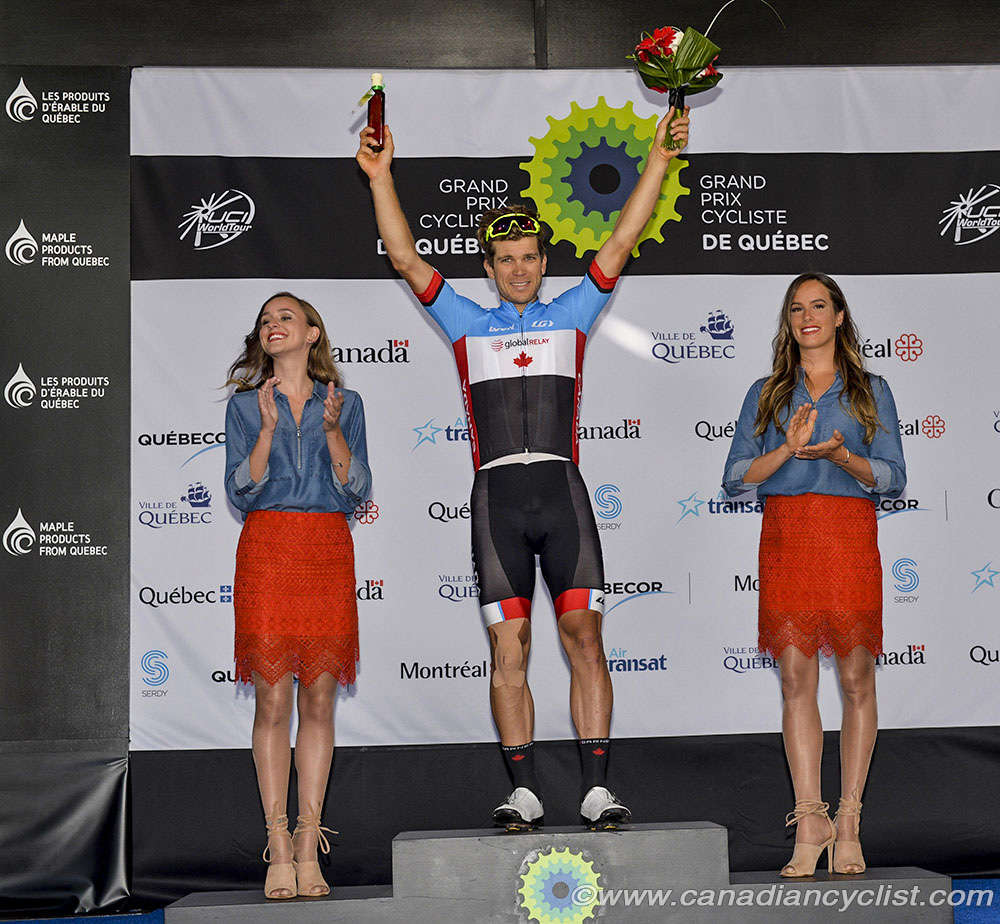 The group managed to carve out a lead of over five minutes before the top teams started to pull them back.  The last members of the group, including Masbourian, were caught with just under three laps to go, with Bak managing to hold on until almost the final kilometre of the lap.

Orica-BikeExchange and Sagan's Tinkoff team did much of the work, with BMC contributing towards the end.  Canada's Christian Meier, who just announced his retirement at the end of the season, spent much of the race at the front for Orica.

As Bak was caught, Julian Alaphilippe (Etixx-QuickStep) and Luke Rowe (Team Sky) attacked, gaining 40 seconds as the peloton looked at each other.  But Meier and Orica went to the front to bring them back.  Multiple other attacks were quickly smothered as Tinkoff, BMC and Orica prepared for a sprint.  Rigoberto Uran (Cannondale-Drapac) tried the long attack move that won last year, but faded on the long false flat to the finish, and it was Anthony Roux (FDJ) who started the sprint with 200 metres to go.  As he faded Olympic champion Greg van Avermaet (BMC) went by him with 100 metres remaining, but then Sagan surged to the front in the final 50 metres to win by over a bike length.  Boivin finished in a small group just five seconds back.

"This race is one of the hardest races in the season," said Boivin.  "I had a pretty good ten days of training [after his crash], and I thought I felt not too bad.  But training and racing are different beasts, so it is hard to know how your form is.  With four laps to go I was feeling pretty good, and just to be here was a bit of a miracle, so I'm definitely happy with the result.  Hopefully I can build on that for world championships in mid-October."

Sagan said he was surprised to win because he didn't feel like he had the best legs early in the race.

"I felt like I didn't need to go full gas on the last two climbs [to chase attacks] because the end is so hard. The last kilometre was a headwind, Uran tried to attack like last year. I saw Rigoberto [Uran] go, and I thought maybe we would play for second place, but he slowed toward the end because it was so hard. The FDJ rider [Roux] started the sprint and gave me a very good leadout. It was unbelievable."