This past weekend saw the first taste of winter descend upon Edmonton, AB as riders in all categories of the Velocicross/United CX double-header took on a challenging course in near freezing temperatures and increasing snowfall.

With enough run-ups, barriers, switch-backs and off-camber sections to put even the most experienced racers to the test it was as much a battle of attrition against the course and elements as it was against one's fellow competitors.

Tire choice, pressure and mechanical good-fortune were largely influential in the outcome of both Saturday and Sunday's races in the scenic Fulton Park, with some of Canada's top CX talent coming out to sharpen their skills before the upcoming national championships and European campaigns.

Saturday's Open Women race saw current provincial cyclocross champion Shantel Koenig (Redbike) and Alana Heise (HSC - Garneau) distancing themselves from the field in the opening laps and settling in for an exciting duel that played out for the remainder of the race, with Koenig eventually pulling away to take the win. Heise's solid performance was good enough to claim second spot on the podium while Caitlin Callaghan (Hardcore CC) took her first Open Women's podium result with third place. 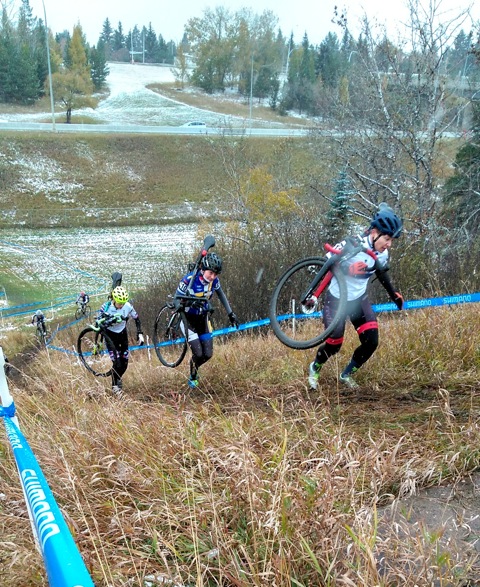 Provincial CX champion Shantel Koenig (Redbike) leading a trio up the slick run-up in the Open Womens race on Saturday. 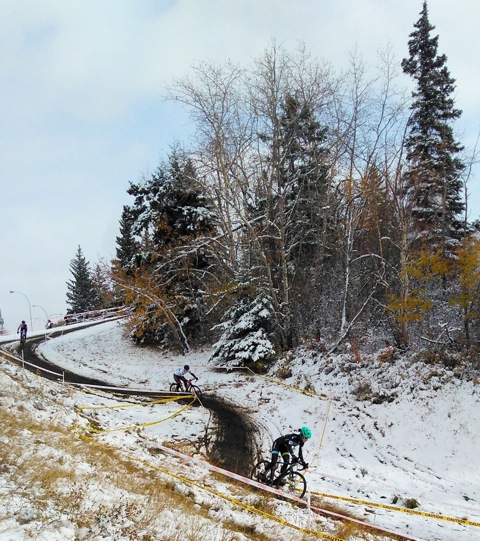 Sidney McGill (Focus CX Team Canada) off to an early lead on lap one of the Open Womens race on Sunday, in which she would go on to take a clear victory.

Sunday's race saw even more snowfall and the return of recent Jingle Cross world cup competitor, Sidney McGill, who put her finely tuned bike handling skills to good use. McGill took an early lead over the rest of the field and never looked back as she extended her gap to her chasers with each lap. Saturday's victor Koenig put in another solid performance to take the second step on the podium ahead of an on-form Alana Heise.

The Open Men's race on Saturday was a showcase of Aaron Schooler's (Focus CX Team Canada) abilities in adverse weather conditions, as he consistently put time into his fellow racers in the slick off-camber sections of the course. Putting in a strong ride to claim second was recent Cross Vegas and Jingle Cross competitor Mike van den Ham (Garneau - Easton Cycling) who admittedly had the wrong tire choice for the day. Rounding out the podium was the ever consistent Andre Sutton (Hardcore CC). 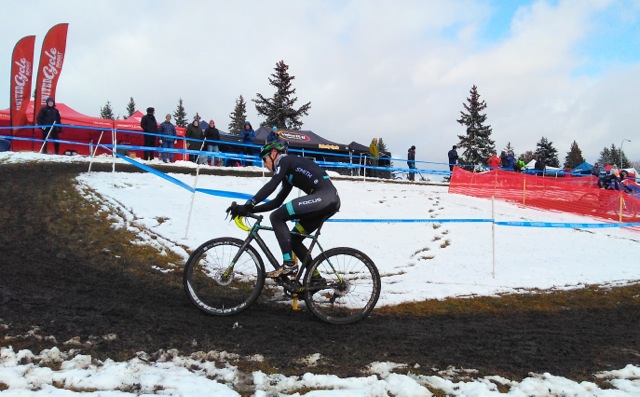 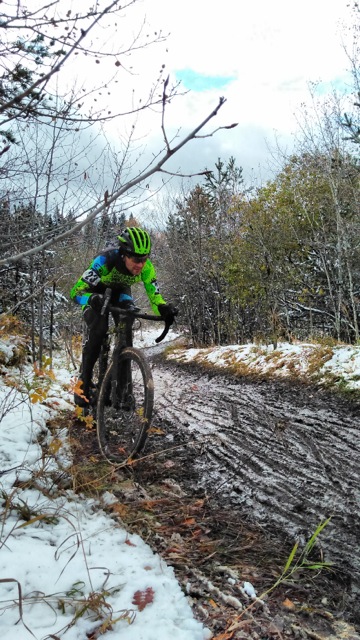 Michael van den Ham (Garneau - Easton Cycling) looking for traction in the mud on his way to victory in the Open Mens field on Day 2 of racing in Fulton Park.

Sunday was a reversal of roles at the head of the race as Mike VDH took control early on and spent the remainder of the contest lapping up the rear end of the field and distancing himself from second place finisher Aaron Schooler. Andre Sutton put in another technically astute ride to claim the third podium step for a second day in a row.