Despite conditions and temperatures more suited to xc skiing, central Alberta once again played host to a memorable double-header weekend of of 'cross racing, with a strong contingent of racers towing the line in all categories. With some of the most technically demanding course profiles to date, riders were tested in both skill and equipment choice/durability, as they battled their competitors and the elements in equal measure.

In stark contrast to last year's event hosted by the town of Devon, AB, which boasted summer-like conditions, riders were greeted by a winter wonderland as they arrived at the Lions Park venue, situated along the picturesque North Saskatchewan River. 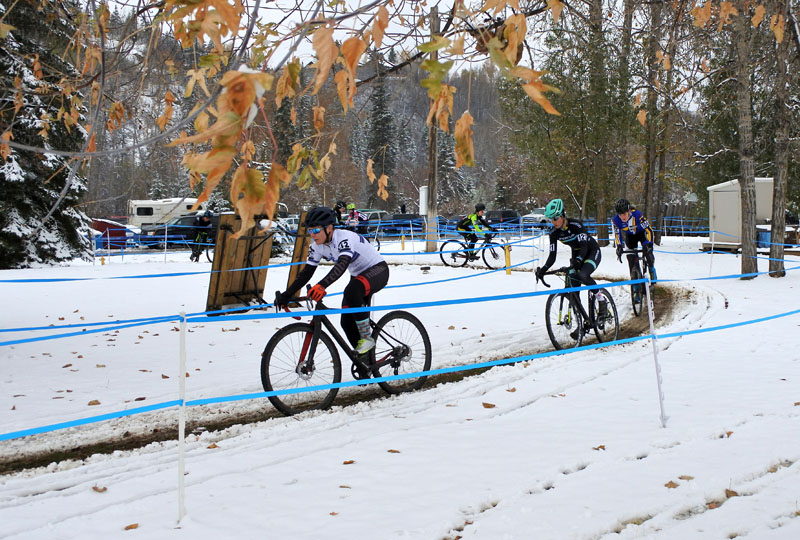 Provincial champ Shantel Koenig leads Sidney and Abbey McGill in the early stages of the Open Womens race.The three would go on to contest the final podium spots

In the Open Women's race current provincial champ Shantel Koenig (Redbike) took the early lead but was closely marked by sisters Sidney (Focus CX Team Canada) and Abbey McGill (Juventus CC). Sidney McGill didn't wait long to make her move and once seizing possession of the front of the race from Koenig, the technically astute junior spent the remainder of the race building her gap over the strung out field of chasers. Also putting in a strong ride in the adverse conditions was the younger of the McGill sisters, who eventually claimed third spot on the podium behind Sidney and Koenig. 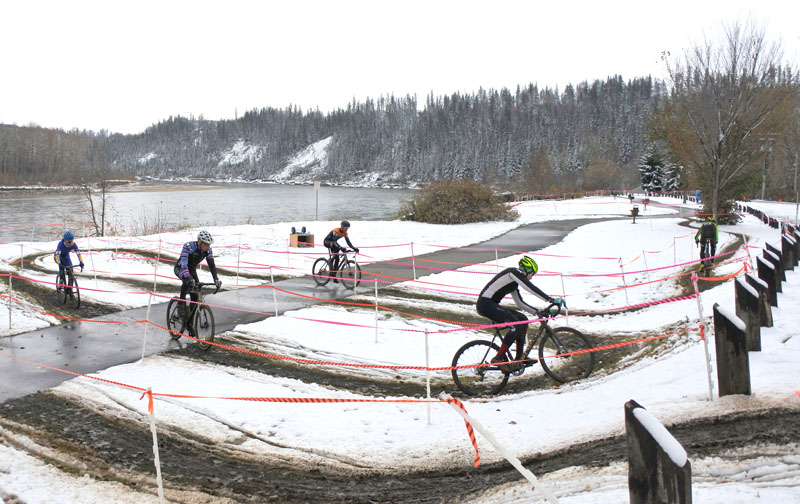 The Open Men's race unfolded in the peak of the days “heat”, providing a mixture of wet snow and mud upon which to carefully select lines of traction. With his usual starting speed Sean Germaine (Juventus CC) took the early lead but would eventually be surpassed by Andre Sutton (Hardcore Bikes) and junior ride Ethan Palamarek (CABC). Once taking to the lead of the race, Sutton would hold onto a slim gap over riders behind, as the remaining podium positions were reshuffled as riders surged and faded. With ice, sand and mud wreaking havoc on drivetrains and pedals alike, it was a the consistently smooth laps of Andre Sutton that would deliver the win, with Sean Germaine and David Yexley (Independent) not far behind an claiming second and third respectively. 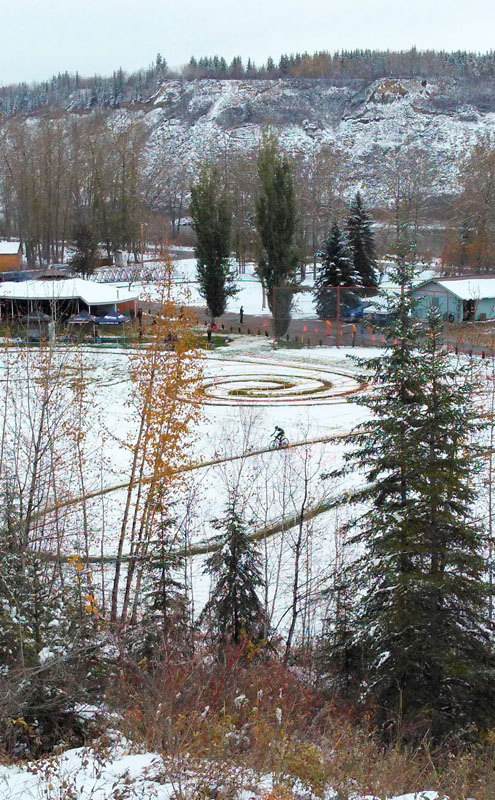 Day two of the weekends 'cross events didn't fail to live up to it's touting as the most technically challenging course to date in Alberta, with countless steep, off-camber climbs and switchbacks throughout the Burman University campus park. With equally wet and winter-like elements exaggerating the lack of traction along the scenic loop, it was a truly epic day for racers and spectators alike. 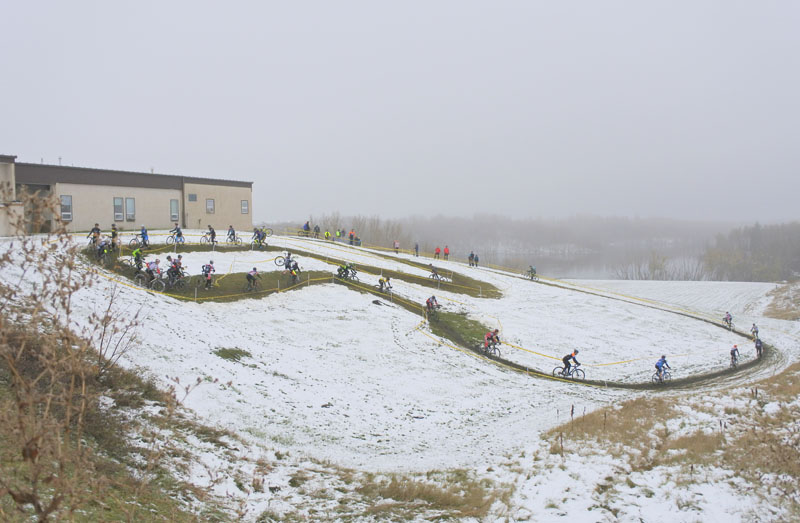 The wonderful mayhem of winter cross racing as viewed from afar

In a show of consistency and grit the Open Women's podium finishers from the previous days race again proved their effectiveness in adverse weather competition. Against the misty backdrop of changing leaves and Barnett Lake, Sidney McGill once again displayed her strong form as she builds toward the Sherbrooke national championships, distancing Shantel Koenig and sister Abbey McGill early in the race. The podium would mirror the previous days event, with the McGill sisters taking first and third, with Koenig once again putting in a solid ride to claim second place. 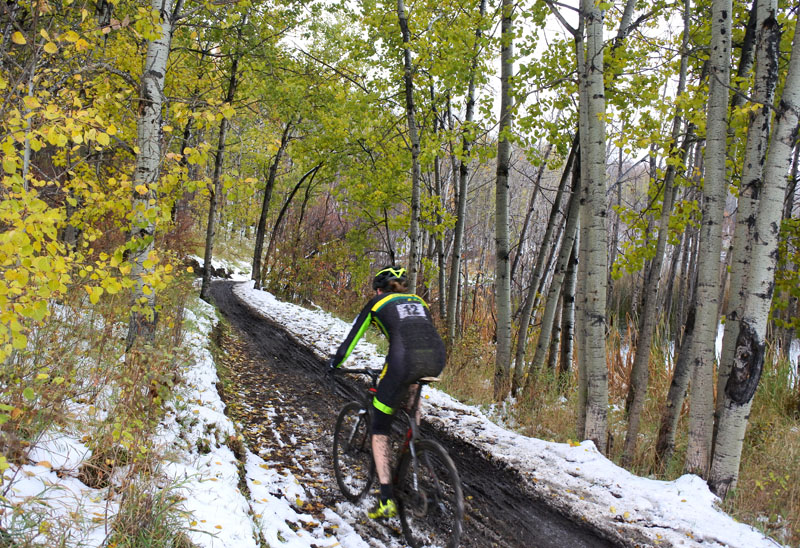 An on form Andre Sutton works to extend his lead in the Open Mens race, which he would add to his win count from the previous days victory

The Open Men's race played out on the slickest course conditions of the day, as early events had only increased the layers of wet mud coating each switchback. An early duel between the previous day's victor Andre Sutton and hometown favorite Ethan Palamarek saw an exchange of the lead multiple times. An untimely loss of traction and resulting mechanical midway through the race saw Palamarek lose contact with Sutton, who picked his way flawlessly around the perilous corners. The junior rider would recover well and hold onto a hard fought second place behind Sutton on the eventual podium, as current provincial road champion Shawn Bunnin put in an equally impressive ride to claim third on the day.