"Our plan for the first two World Cups was to have a clean run," explained Ian Melvin, National Men's Track Endurance Coach.  "We wanted to get the points to qualify for Worlds so we didn't have to depend on Cali (World Cup #3)."

In the final against Belgium, the Canadian team of Aidan Caves, Adam Jamieson, Jay Lamoureux and Bayley Simpson trailed the Belgians over the first 3000 metres, after the their rivals got off to a very strong start.  However, the Canadian team came back steadily, cutting the gap from over a second after the first 1000 metres to less than eight-tenths of a second at the halfway mark, then less than three tenths with 1000 metres to go.  In the final 1000 metres, the Belgian team slowed dramatically, while Canada had its fastest split of the race, to win with a time of four minutes and 2.144 seconds, over four seconds ahead of Belgium.  France won the bronze medal. 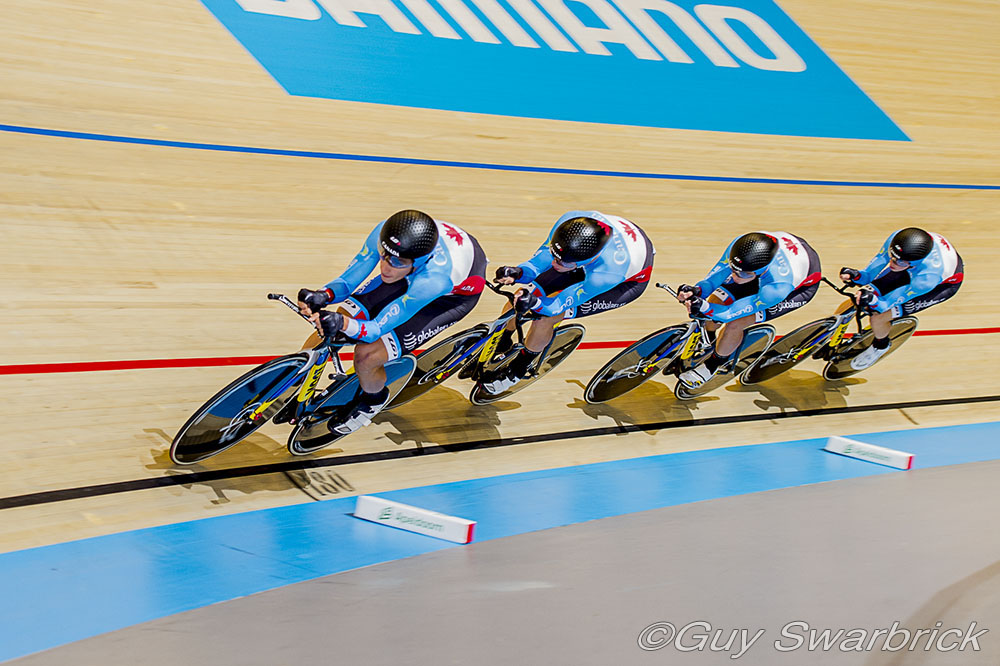 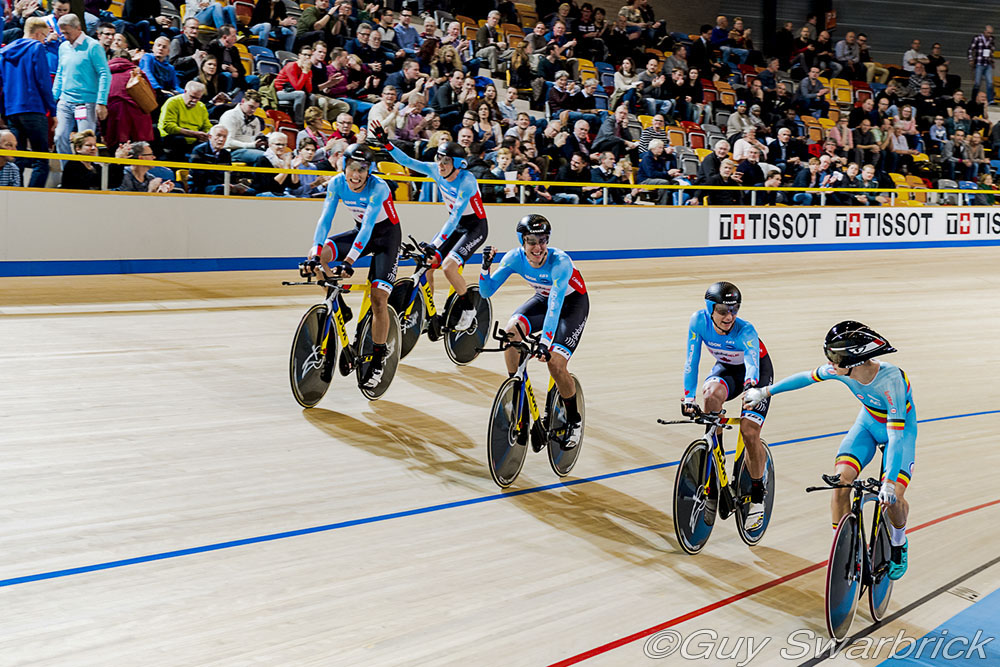 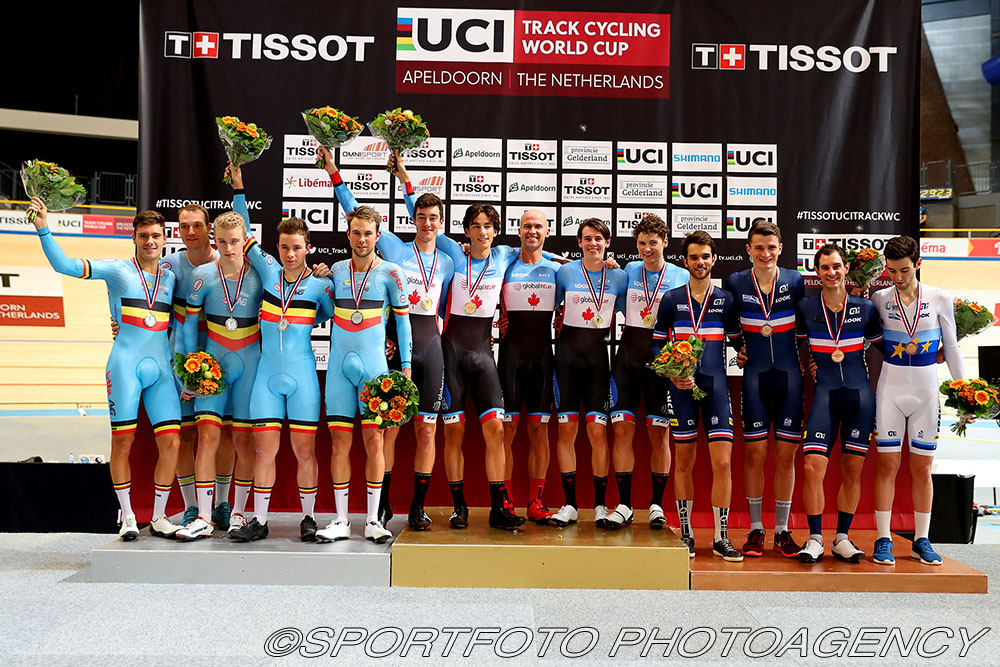 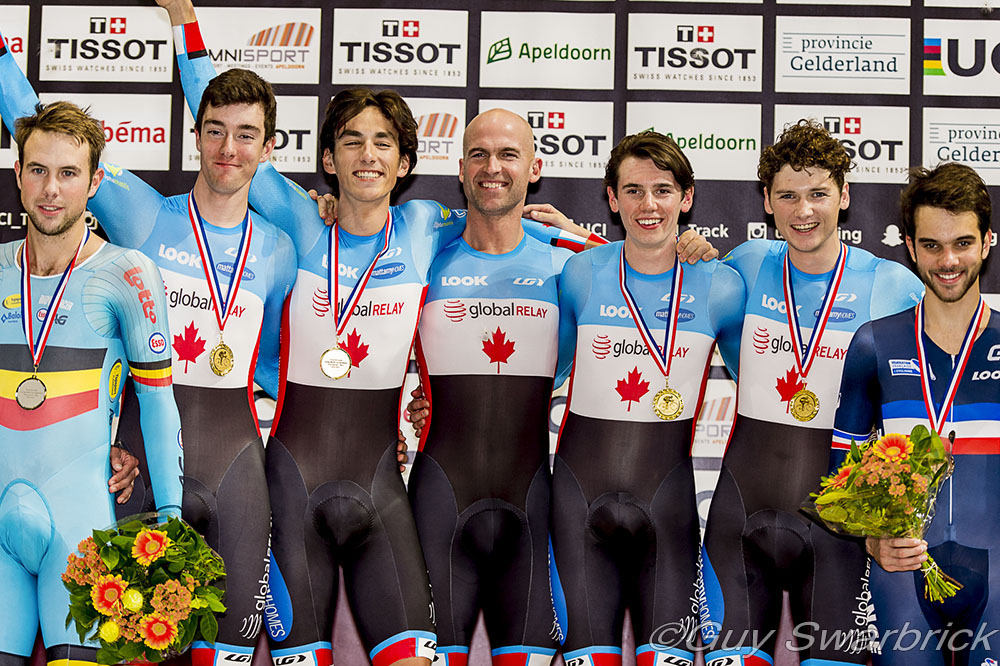 "It's a pretty crazy day," said Aidan Caves, "it's actually been a pretty crazy month since Nationals, probably one of the best ever.  We were aware that they [Belgium] were probably going to go out hot, but we didn't panic, because we all knew that we were the stronger team.  We knew that if we stayed strong that we have consistently had a faster final Kilo than most of the other teams, so that's what we focussed on; to come back from the little bit they were up on us.  It worked out pretty well to plan."

"We always had goals since the program started and we've met those goals for the season.  But I don't think we thought that a win was possible.  We were going for top-eights, and we achieved that, so I think we are pretty happy."

Caves will also race the Omnium on Sunday, which will be run under the new one-day format, "I've been reviewing videos from past times it's been run.  It looks to be short and fast.  Not too long of races suits me from a speed standpoint, so I'll just have see what I can do.  It will be my first time doing the new Tempo Race, so we'll see how that goes."

Bayley Simpson said, "We've got five guys here who can execute, so we are using everyone to have some fresh legs for each ride.  This was my first trip with the team, and the first ride I got to do was in Glasgow for the bronze medal.  It was nerve-wracking but we executed it that day and then we were able to come here and do it again.  I can't even put it into words, really.  The time was good; we looked at the past times here when the world championships were here in 2011 and the winning team was a high 4:01, so we are pretty happy with our time."

Canada now leads the overall standings with 1800 points, followed by Round 1 winner Great Britain at 1700 and France, also with 1700 points.