The USA-based Team TIBCO - Silicon Valley Bank presented its 2017 staff and riders on Saturday at the newly opened ITalico Restaurant in Palo Alto, California. Riders and staff were introduced to an enthusiastic audience of friends, family, fans and, most importantly, representatives of the team's sponsors and supporters. 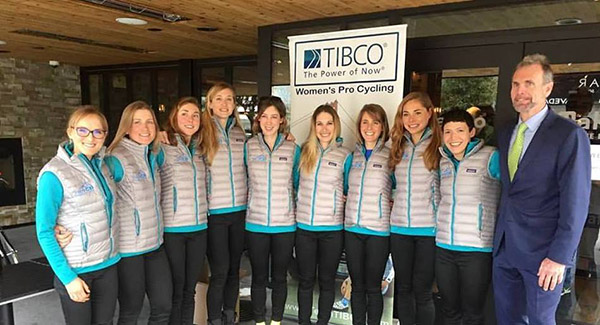 "This is always my favorite time of the season" said Linda Jackson, Founder of Team TIBCO-Silicon Valley Bank and former Canadian Olympian. "It's such a great opportunity to bring the whole team in to Silicon Valley where our two title sponsors, TIBCO Software Inc and Silicon Valley Bank are headquartered.  Our team originated out of Palo Alto Bicycles back in 2004, and the community here has seen our steady growth from a small local team ranked 60th in the national standings, to the top ranked team by 2009.  Our focus has now expanded to getting our riders the international racing calendar they need to become some of the best riders in the world."

First up for the team is The Valley of the Sun Stage race (February 17-20) in Phoenix, Arizona, after which the team leaves for Europe to race the first three UCI Women's World Tour events (WWT):  Strade Bianche, Ronde van Drenthe and Trofeo Alfredo Binda.

The team's Sports Director, Ed Beamon announced, "We will test out the race legs at Arizona's Valley of the Sun stage race at the end of training camp. That should help get the blood circulating as we kick off our international race season and the beginning of the second edition of the WWT on March 4th in Siena, Italy. After contesting the first three WWT races we'll return to the U.S for a major block of North American racing and plan to head back to Europe later in the summer. I think we have a great combination of savvy and experienced riders in addition to some thrilling new talent, an equally exciting race schedule, and I can't wait to see the women performing together."

Seven new additions add depth and enthusiasm to the 12-rider roster. At only 23, Mexican Ingrid Drexel brings valuable international experience to her new team. She joins after spending the last three years on Italian based squads and her European racing experience is sure to pay dividends on both sides of the Atlantic. Heather Fischer (28), stage winner at the 2016 Tour of the Gila and veteran of many USA National team projects will be joined by 35 year old Jennifer Tetrick (USA) whose late entry into competitive cycling was nurtured by several years as a successful triathlete.

Another rider with European experience joining the team is Canadian Lex Albrecht, a gifted climber who, with her 2016 team, raced up the famous Mont Ventoux on stage 3 of last year's Tour Cycliste Féminin International de l'Ardèche.

Kate Buss, Nicolle Bruderer and Madeleine Park bring more youth to the squad as they enter the professional ranks for the first time.  23 year old Kate Buss (USA) turned heads with her stage 1 podium performance at the 2016 Joe Martin Stage Race time trial, and will surely be a talent to watch on the domestic scene this year. Nicolle Bruderer, also 23, is the Guatemalan Individual pursuit record holder and represented her country at the 2016 World Championships.

18-year old New Zealander, Madeleine Park is the youngest rider on the team, but no stranger to the podium. Having won several Junior National Championships, Madeleine is also a Junior World Champion in the team pursuit, setting a world record with her team in the 2015 gold medal ride. She has represented her country at the word championships on both track and road and is looking forward to her first season in the elite ranks.