Cannondale-Drapac has announced their team for the 100th edition of the Giro d'Italia, and Canada's Mike Woods is part of the squad.  The Giro begins on Friday in Sardinia. It ends on the 28th of May in Milano.  Below is the announcement, with comments from Mike Woods. 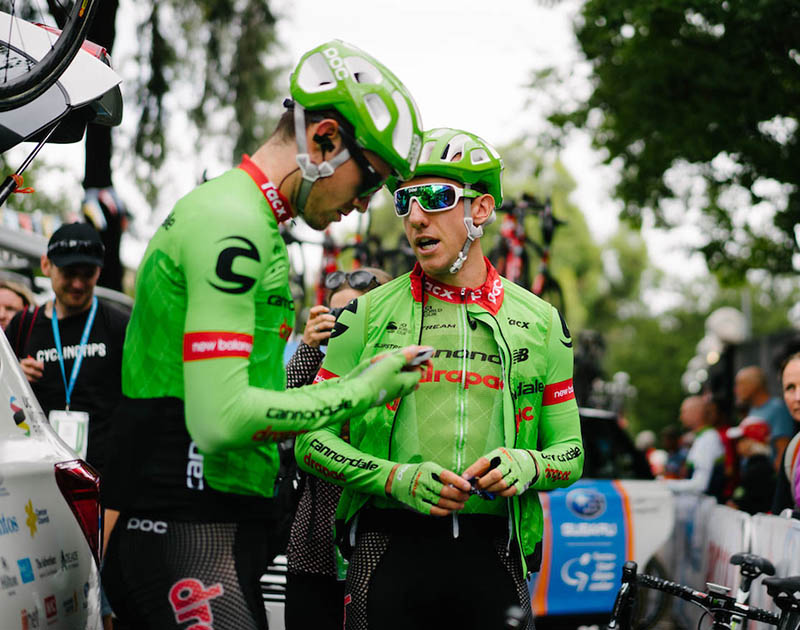 Formolo. Dombrowski. Rolland. Villella. Woods. Slagter. Koren. Howes. Carthy. Cannondale-Drapac is rolling into the 100th Giro with a squad that's poised to attack the race and look for opportunity along Italy's fabled roads. The team is not beholden to a single leader at the Giro, and head director Charly Wegelius hopes the riders make the most of such freedom.

"My hope is that they can enjoy that and try things, and experiment with things, and just push their limits without fear of losing anything or having to do any sort of defensive decision making," Wegelius said. "They can just see how it works out on the road and grow from it. I think that's pretty precious in the development of a rider."

The lineup, however youthful and opportunistic, isn't a stranger to the Giro. Formolo won a stage in 2015. Rolland finished fourth overall in 2014. Dombrowski lit up the final week of the race last season. Howes is a steady hand wherever he goes. Slagter has performed well on varied terrain his entire career. Woods showed in the Ardennes he's got bite. Koren knows Italian roads and Italian racing, same as Villella. Carthy just rode a gritty Tour of the Alps.

The season's first grand tour has been affectionately dubbed the "connoisseur's grand tour." It lacks the absolute control of the Tour de France and its fans - tifosi - are among the sport's most vibrant. The roads are spectacular. The weather is unpredictable. The Giro can feel like a three-week one-day race.

"It's a big event, but it's still real enough to have a genuine character. The Tour de France is a massive global event, but the Giro has still got its quirks, and it basically represents everything that's great about Italy and the Italian culture. It's effervescent and it's bubbly, and it's unpredictable, colorful," Wegelius said.

Mike Woods:  "From a state-of-mind perspective, I am pumped to be doing this race.  Last year I managed, through some bad decisions on my part and bad luck, to not start any grand tour on the calendar.  This has made the significance of this one, to me, that much greater.  Aside from the excitement, there is definitely some respect that I am storing up for that final week of racing and the process of getting there.  I know crashes, illness and just a few off-days can derail even the best riders in the peloton, so I am making sure not to get too far ahead of myself."
Cannondale-Drapac press release (edited)