Canada had two riders in the top-20 in the Under-23 men's cross-country on Friday at the Mountain Bike World Championships in Cairns, Australia, with Marc-Andre Fortier of Victoriaville, Quebec, finishing 12th and Quinton Disera of Horseshoe Valley, Ontario, finishing 17th.  Sam Gaze of New Zealand successfully defended his title, with Alan Hatherly of South Africa taking the silver medal and Maximilian Brandl of Germany the bronze.

A group of 14 riders had split from the main field by the end of the start loop, as the riders headed out for six laps of the 4.3 kilometre circuit through the rainforest at Smithfield Park.  The group included Quinton Disera, with Fortier eight seconds behind, along with Peter Disera. 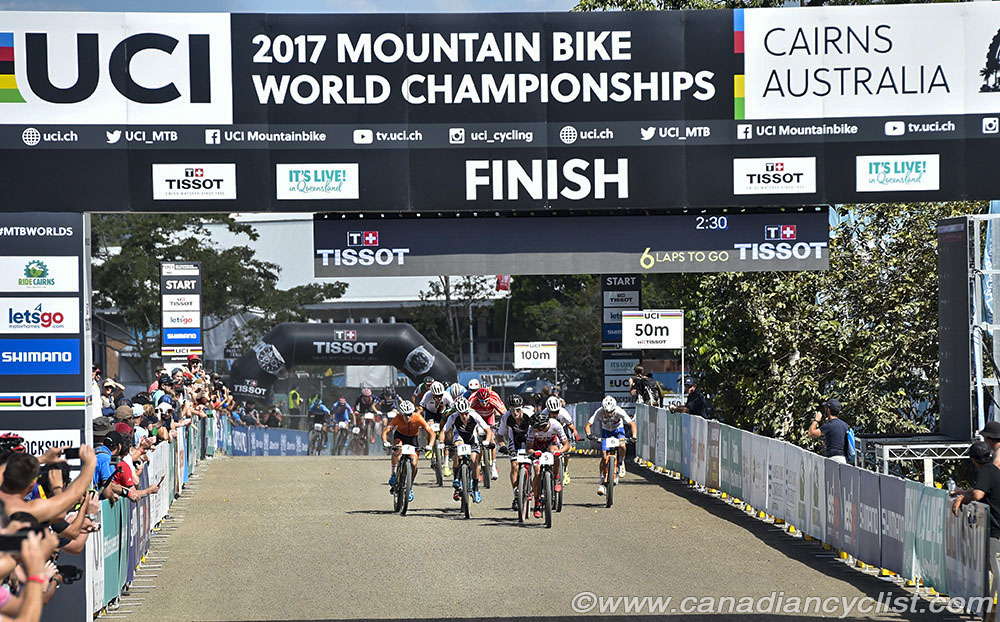 The field was splitting by the end of the start loop

That front group was down to eight after the first lap and six after two laps.  The final medal selection was made on the fourth lap, when Gaze upped the pace and only Hatherly could go with him.  Brandl rode alone in third for the rest of the race. 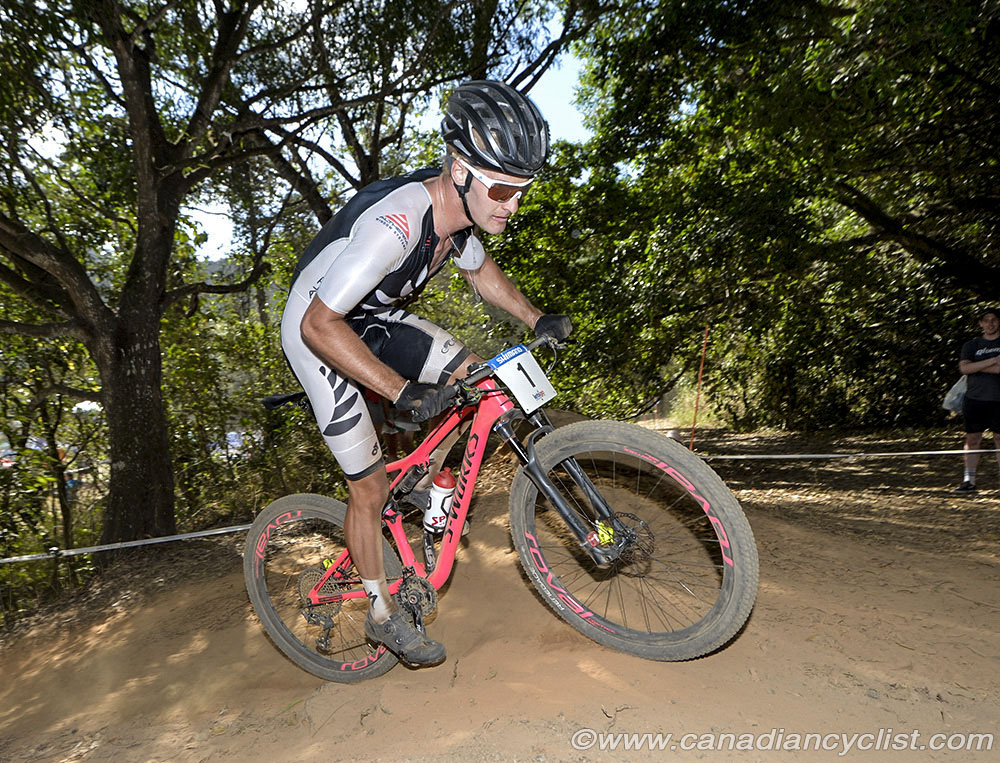 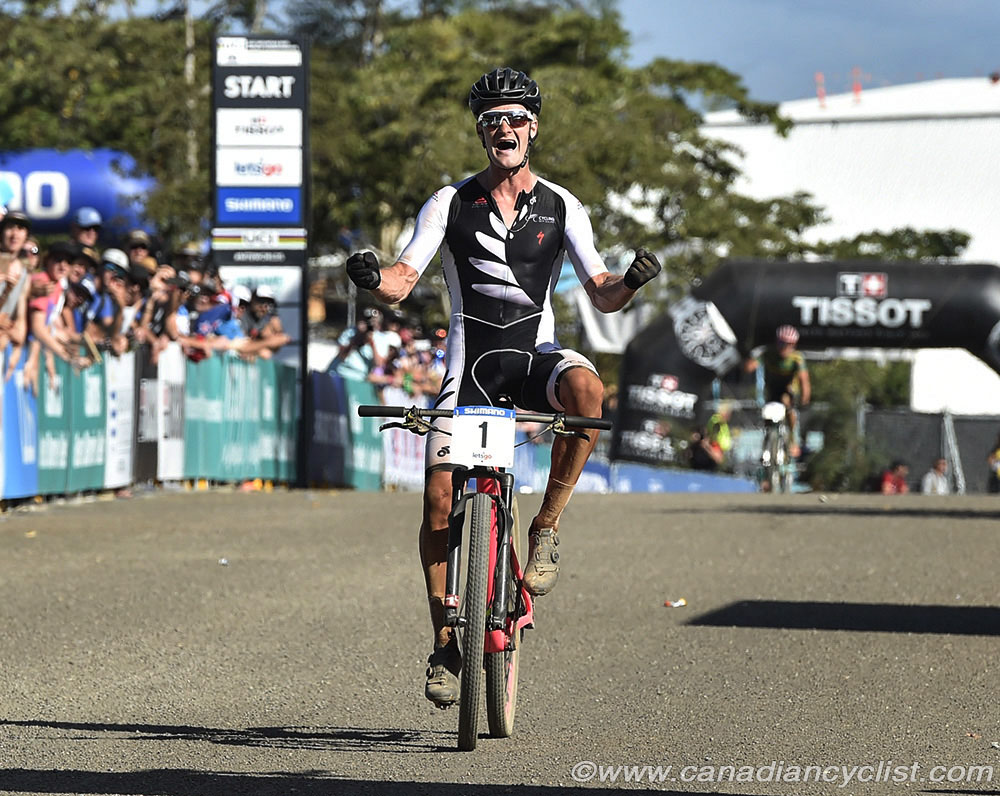 Sam Gaze (New Zealand) wins back to back World champs 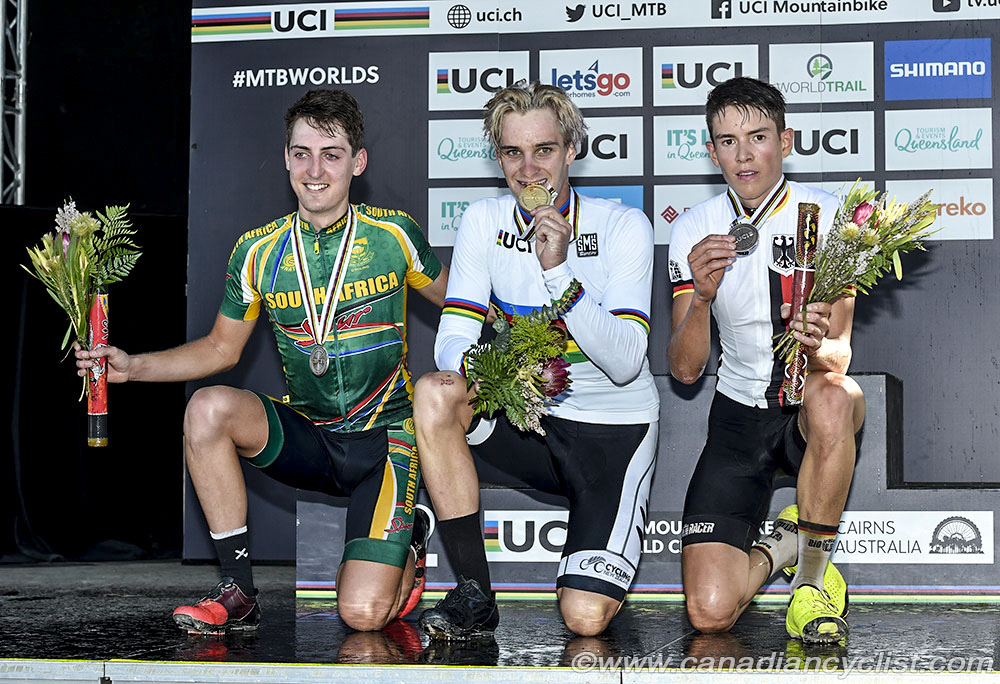 Gaze attacked again on the fifth lap, opening a 13 second gap as he began the final lap.  Hatherly was able to limit the time loss, but could not close the gap, finishing 11 seconds back, with Brandl at 51 seconds.

"It was a very technical race because a lot of the boys were going well today," said Gaze.  "For me it was key to have a good start loop because it allows you to be first on the climb, which makes it easier for the rest of the lap.  So my plan was to stay at the front and be control and wait for a moment that suited me.  But U23 is unpredictable because there are so many good riders coming up, so I'm happy to be able to pull on the rainbow jersey for a second year in a row." 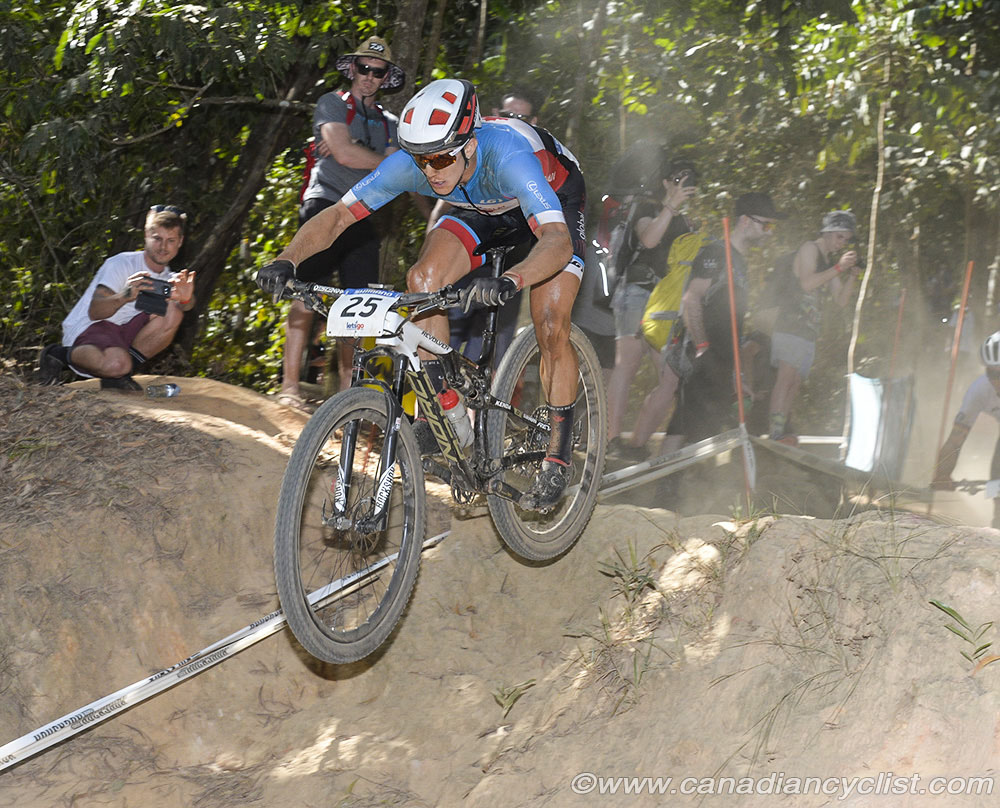 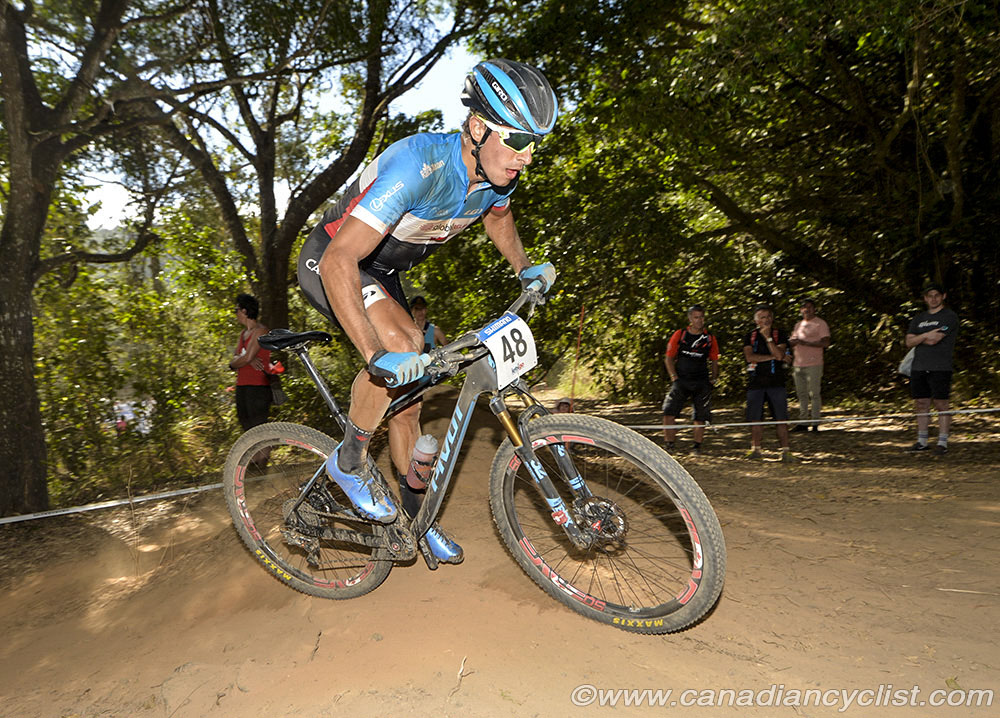 "It was amazing, I didn't have any problems all race," said Fortier.  "I started 48th and by the end of the start loop I had moved up a lot; an amazing day for me.  Usually I prefer courses with shorter punchy climbs like Mont-Ste-Anne, and here it was a long climb.  So it was not the perfect course for me, but today it was perfect!  It's a good way to end the season, so for the winter I will have lots of motivation to train."

Peter Disera was in the top-15 as the race entered the third lap, but suffered a flat, dropping him back to the mid-20s, where he finished in 24th place.  Canadian Under-23 champion Sean Fincham of Squamish, BC, starting near the back of the field, moved up steadily in the first half of the race and then maintained 33rd place for the finish.  Raphael Auclair of Haute-Saint-Charles, Quebec, had moved up to the mid-30s before a twisted chain forced him into the pits on Lap 2, and he finished 60th.

- The majority of the Swedish team is not here, including Olympic champion Jenny Rissveds.  The reason?  The national federation did a sponsorship deal with POC that requires all athletes to use POC helmets on national projects, such as Worlds.  Pretty much all top riders have contracts with trade team sponsors, so the riders pulled out (except for a few POC-sponsored athletes that came to Cairns at their own expense).  Canada has already been through a controversy like this, back at the 1992 Olympics, when they made a similar deal with Garneau.  Riders such as Curt Harnett and Alison Sydor balked, and it became a news story with threats of legal action before it was settled.

- The dust has been extreme on sections of the XC circuit, so organizers are going to water the worst parts overnight tonight to see if they can hopefully reduce the problem.