The UCI BMX World Cup concluded in Santiago del Estero, Argentina, on September 16-17, with Rounds 5 and 6.  Tory Nyhaug of Coquitlam, BC, finished third overall in the Elite Men's standings.

In Round 5, James Palmer of North Vancouver, BC, made the men's final, finishing eighth overall.  It was his second World Cup final.  Nyhaug finished 14th overall.  Daina Tuchscherer of Chestermere, Alberta, was Canada's only entrant in the women's field, making the quarter-finals and finishing 19th overall.

"I had a rough start to the day after crashing in practice," said Palmer, "but it was a nice turnaround to finish off the day with a World Cup final."

"I was really excited to be here in Argentina," admitted Tuchscherer, "it's one of my favourite tracks.  I rode to the best of my ability; I'm sad I didn't make it through to the semi-final, but all-in-all I rode the best I could."

Round 6, the final event of the season, saw Nyhaug make the men's final to finish fifth overall.  Palmer was knocked out in the one-eighth final, finishing 35th.  In the women's competition, Tuchscherer once again made the quarter-finals, finishing 18th overall.

"I'm really proud," said Nyhaug.  "It's been a long year. I had a good finish today and it's been my best overall season, so I'm proud to be on that overall World Cup podium; it's really big for me. To make five of six Mains ... I'm really happy." 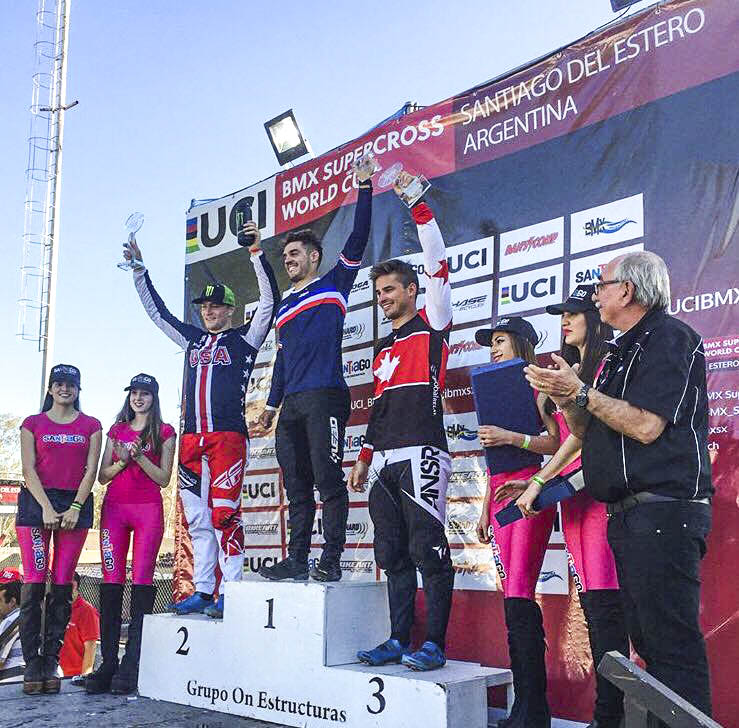 In the final standings for the season, Nyhaug finished with 535 points.  Sylvain Andre of France won the overall title with 645 points, followed by Connor Fields of the USA with 620 points.  James Palmer made the top-25, finishing the season 23rd overall.  Alex Tougas of Pitt Meadows, BC, was 100th, with 15 points.

In the women's standings, Drew Mechielsen of Langley, BC, was the top Canadian in 25th place with 165 points.  Daina Tuchscherer finished 43rd with 80 points.  Laura Smulders of the Netherlands won the title with 790 points.

National coach Adam Muys said, "we are very happy with the group of riders we brought to this World Cup final, and super excited to see Tory finish out the year with an overall podium.  He has made some good improvements with his starts, and I think that has helped him make the finals. James making his second final was also really great, and he adds some depth to our program. Daina had some injuries earlier in the season, but she is back for the finals and riding technically well."