At barely more than 3,300 kilometres long, the 2018 Tour de France ranks among the shortest of the 21st Century. The field is also reduced to 176 riders. The organizer - ASO - also announced that La Course by le Tour de France will return for a fifth year, this time as a portion of Stage 10 of the Tour.

For 2018, the Tour is confined to the northwest and southeast sides of France, starting in Brittany and running northeast to the Belgian border (where it will include a section of the Roubaix cobbles), followed by a flight to Annecy region of the Alps, heading from there southwest towards the Pyrenees. The second last day will have a hilly time trial before the riders fly back to Paris for the traditional finish around the Champs-Elysees. 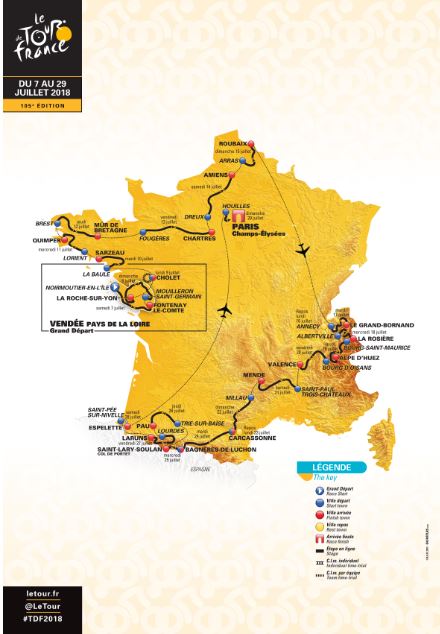 This unusual distance results primarily from a proposition made by race director Christian Prudhomme to the riders, who will have to build their success in these new territories:

"We especially wanted to emphasize stage variety and the routes that may prove decisive, whilst combining legendary climbs with brand new ascensions or ultra-dynamic formats, to provide a vision of modern and inspired cycling."

The section of the race in Brittany will repeatedly sap the riders' legs on the way to Quimper, before a double climb of the Mûr-de-Bretagne the following day, with additional aggression likely due to the new bonuses points awarded on the stage finishes in the opening week. The route has been designed so that the favourites can do battle even before entering the mountains, especially on the 21.7 km of the Roubaix cobblestones.

The stakes in the contest will rise again in the Alps. Whilst the riders may feel that they are far from unchartered territory around Grand-Bornand, it will be a different matter altogether on the Plateau des Glières, which the riders will reach after a steep climb and two kilometres on an unpaved road. The next day, the pack will not only finish on the Rosière ski resort, but also ride the Col du Pré pass on the way there. The Alps will conclude with a classic mountain stage finishing at the legendary Alpe d'Huez.

In the Pyrenees, the sprinters could certainly battle for the win at Pau, but the climbers could have the last word in a wealth of different registers: the combative riders will be the ones to watch in Luchon; the most explosive riders will surely take centre stage on the shortest road stage (65 km) to be ridden since the elimination of half-stages with an all-new finish on the Col de Portet pass (2215 m); the riders with the most stamina will shine on the 200 km separating Lourdes from Laruns via the Col Aspin, Col du Tourmalet and Col d'Aubisque passes; and finally the best all-rounders should come up trumps on the undulating time-trial in the relief of the Basque Country. The final top spots will still be up for grabs on this crucial stage 24 hours before the finish in Paris.

The fifth edition of La Course by le Tour de France is a reworked version of stage 10, which the best female riders will race on July 17th, just a few hours before the men.

The women will also start on the shores of Lake Annecy from the town of Duingt. The 118-kilometre course will feature the same formidable finish with the Col de Romme and the Col de la Colombière passes, before the downhill run to Grand-Bornand.