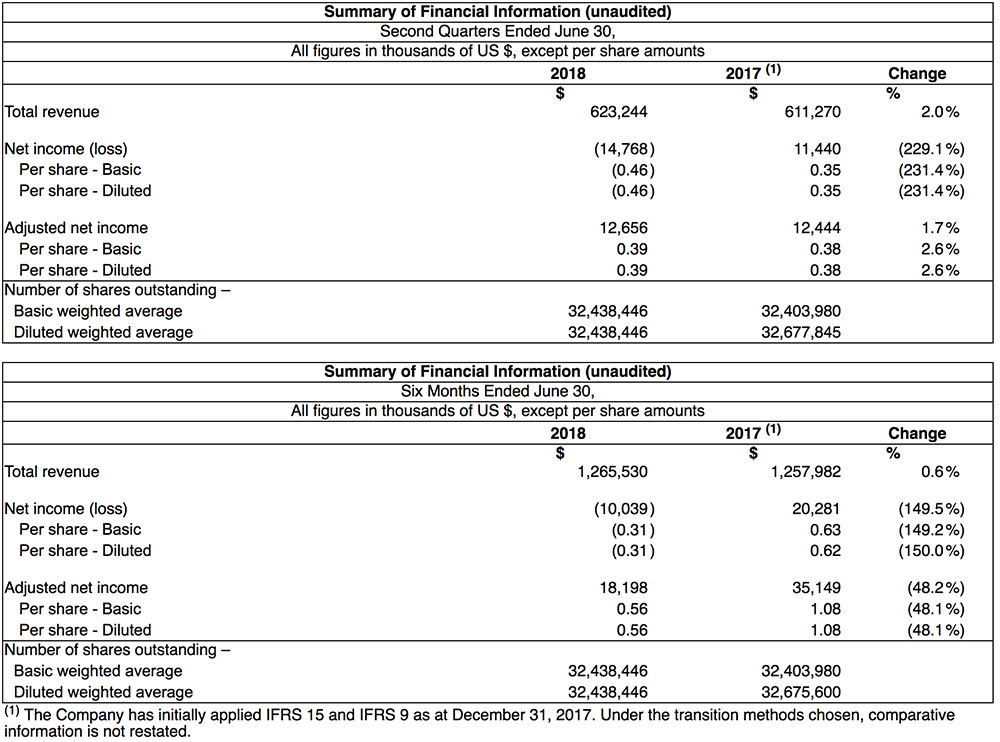 "Across our segments, Dorel Sports rebounded strongly after a tough start to the year, posting solid adjusted results. Dorel Home continued to grow on-line sales and maintained its strong earnings performance. Dorel Juvenile had a disappointing quarter, principally due to a difficult system implementation in Europe that caused us to miss sales. This and the fact that our Chilean business is in the middle of its turnaround plan masked our outstanding performance in the U.S. We overcame the impact of the Toys"R"Us bankruptcy earlier in the year as Dorel Juvenile U.S. had its best year-over-year revenue growth quarter in 9 years. We are encouraged by the markets' reaction to our new bicycle and juvenile products. Sell-through has been good over the past few months and more new products are set to launch through the second half, providing optimism for the balance of the year.

"In a move to strengthen our Board, last month Norm Steinberg was appointed as a new Director. He has a strong track record as a seasoned professional with extensive experience in M&A and in corporate governance, guiding public companies. This knowledge coupled with a proven strategic vision, leadership and legal acumen will complement our existing Board members and will serve all extremely well.  We are delighted to have Norm with us," stated Dorel President & CEO, Martin Schwartz.

The segment rebounded from a difficult start to the year with improved second quarter adjusted operating profit versus first quarter. Compared to prior year, second quarter revenue growth was over 10% at both Cycling Sports Group (CSG) and Caloi.  CSG recorded growth in all key regions with good momentum from recent product launches. Caloi continued to grow on new product innovation and was further aided by a gradual improvement in the Brazilian economy. Pacific Cycle experienced a modest revenue decline overall with the negative impact of the Toys"R"Us U.S. liquidation, but revenue to other key customers increased.

Dorel Sports sold its apparel business in the second quarter to Louis Garneau Sports Inc. The transaction resulted in restructuring costs of US$11.2 million of which US$9.2 million was non-cash. The primary components of the restructuring costs were a write-down of the SUGOI trademark and inventory markdowns. This divestiture will allow Dorel Sports to focus on its core strategic businesses of bikes, parts and accessories categories and electric ride-ons.