Canadian women had one of their strongest performances in two decades on Saturday in the Elite women's road race at the Road World Championships in Innsbruck, Austria.  Karol-Anne Canuel finished sixth after challenging for a bronze medal, Sara Poidevin came back from a crash to finish 14th, and Leah Kirchmann finished 25th, to put three Canadians in the top-25.

The 155.6 kilometre race began in Kufstein with an 80 kilometre run into the final 24 kilometre circuit in Innsbruck, which the women rode three times.  A break containing Aurela Nerlo (Poland) and Ana Sanabria (Colombia) went away at 15 kilometres, reaching a maximum gap of over two minutes before being reeled in as the race entered the circuit. 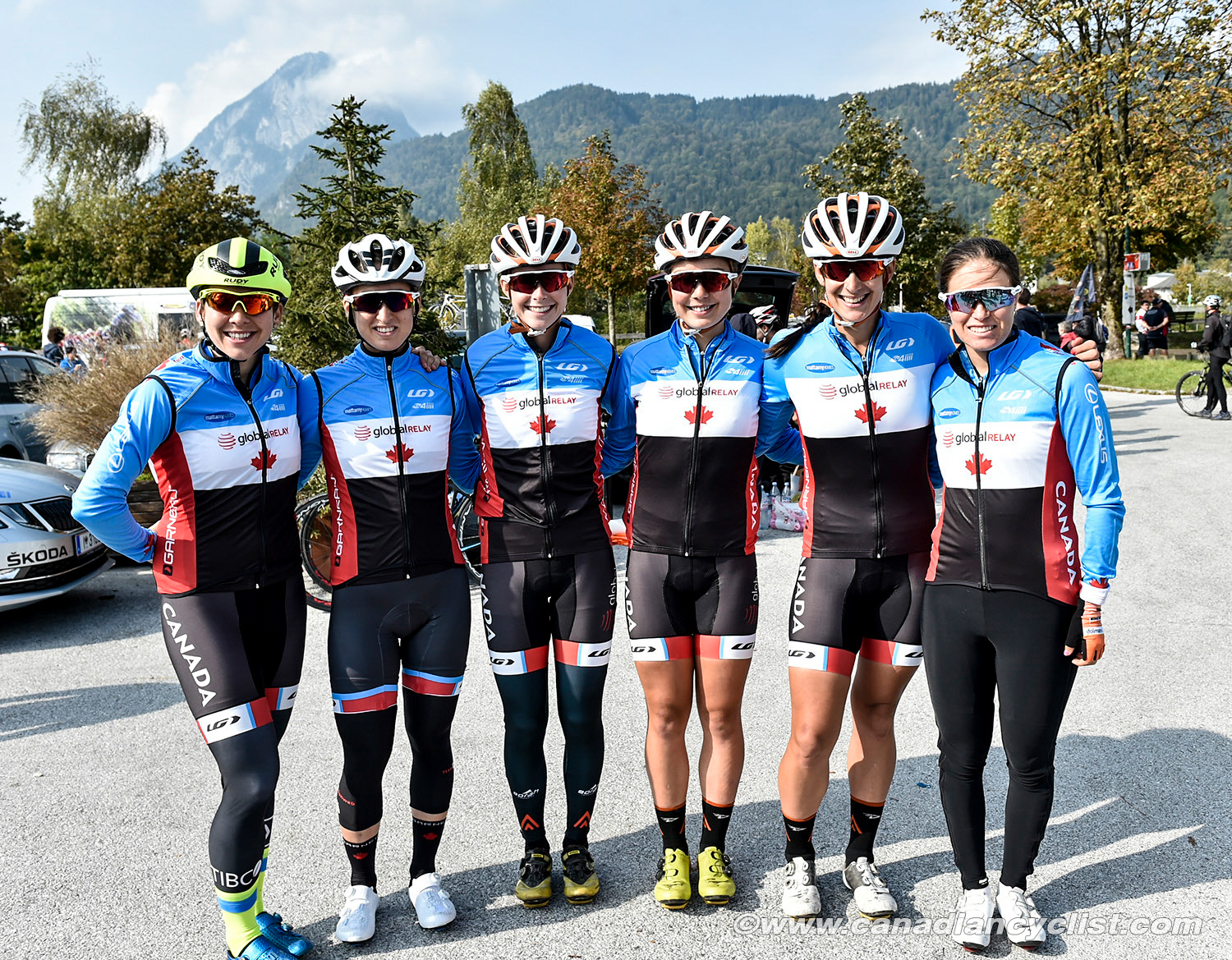 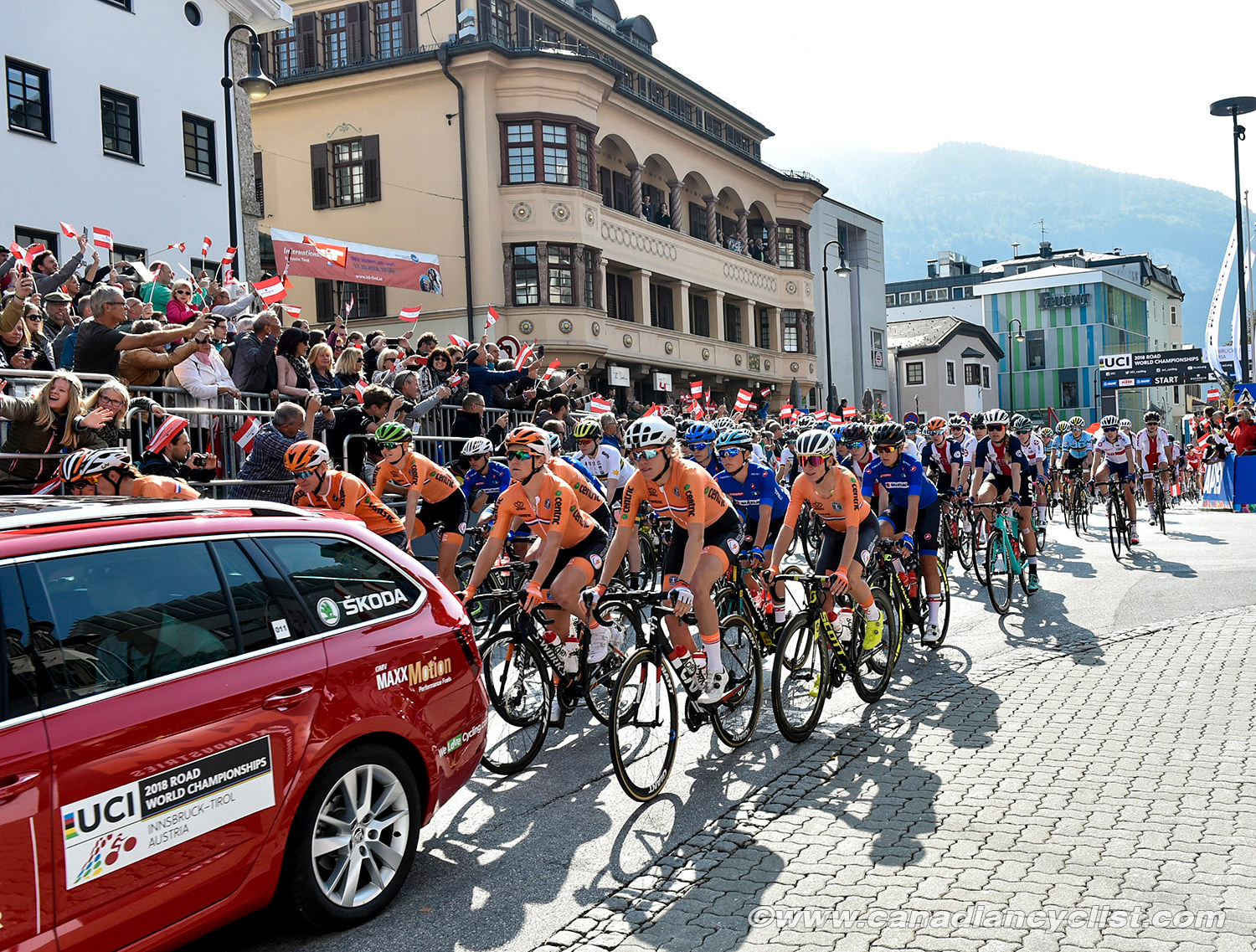 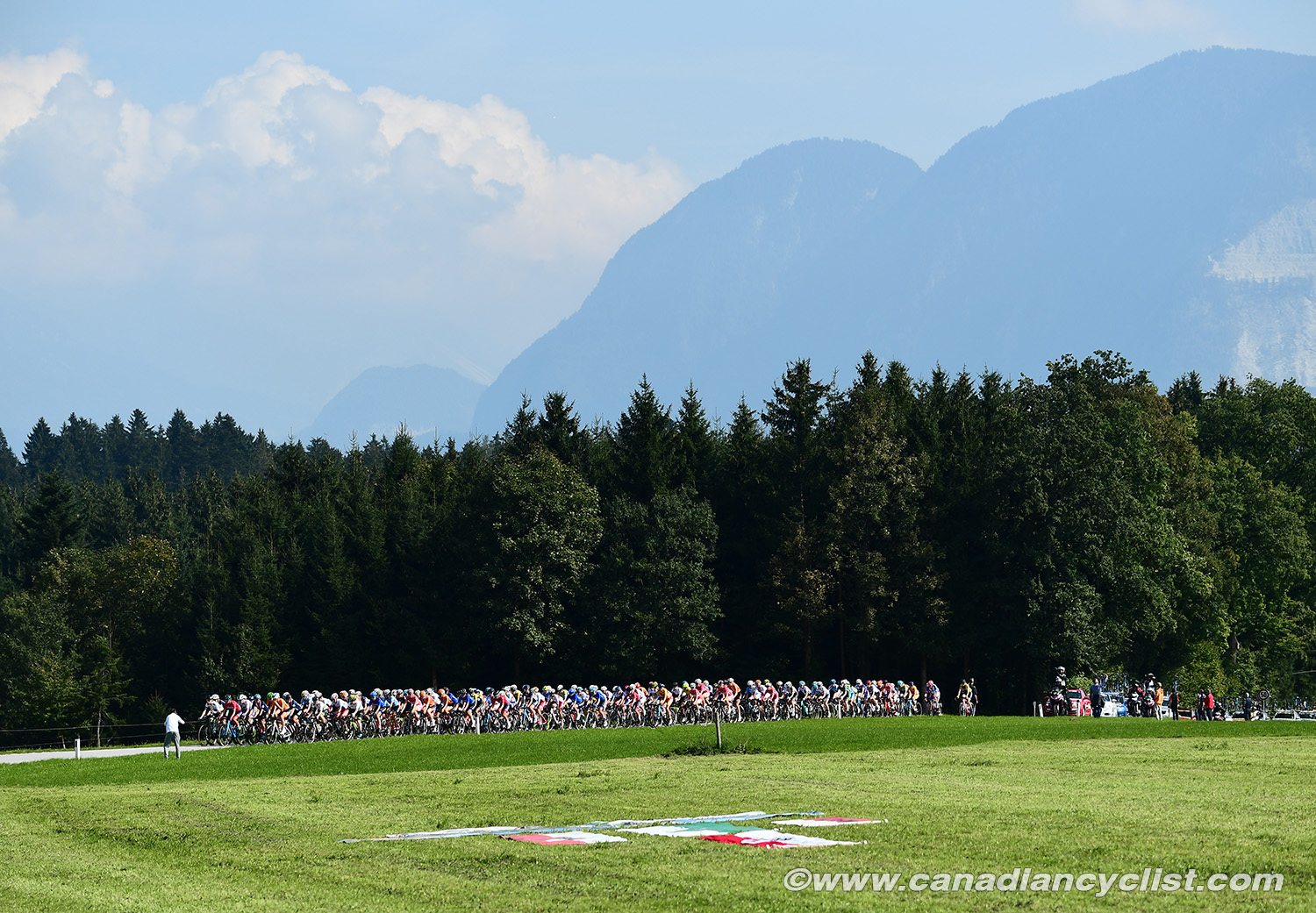 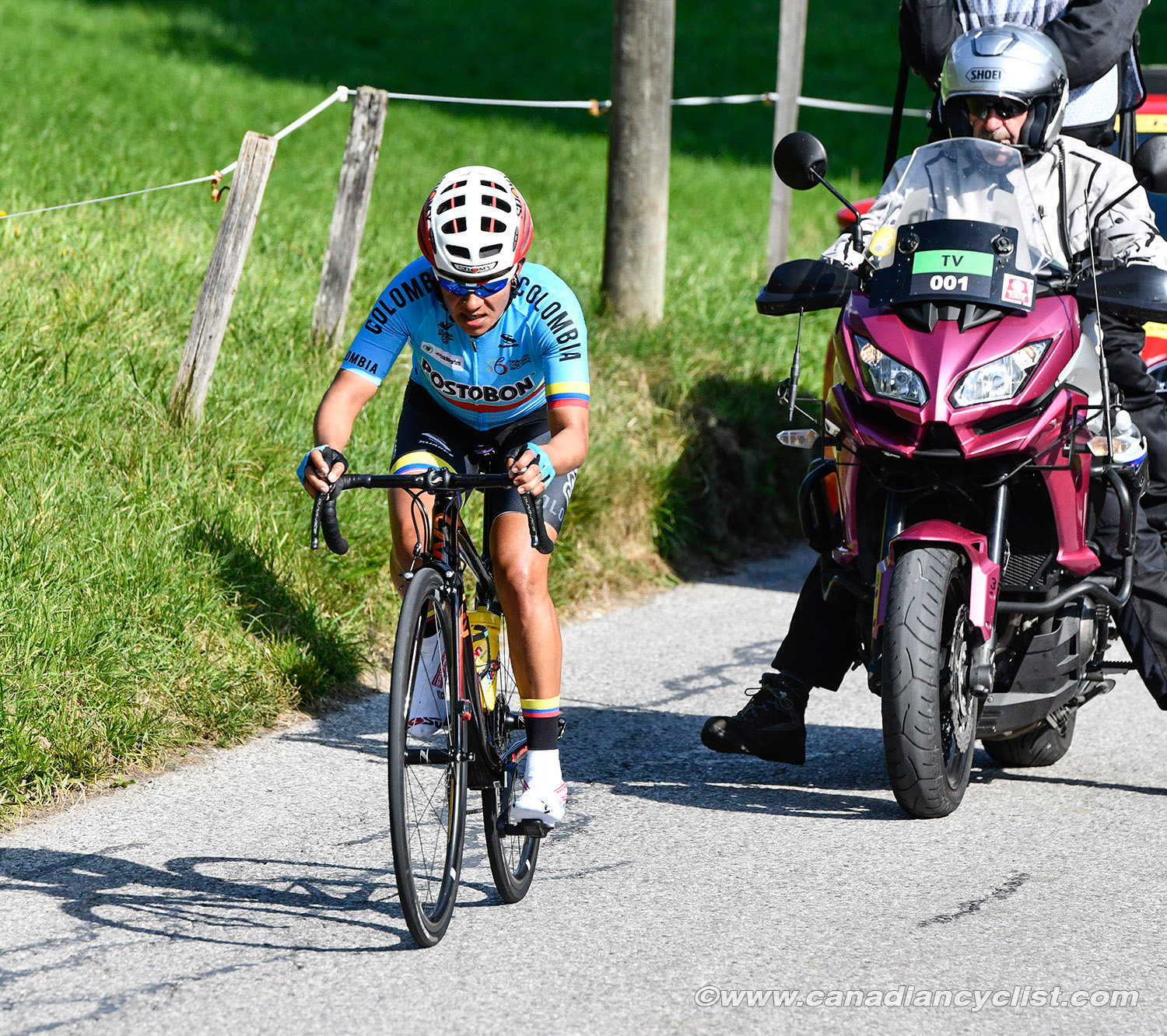 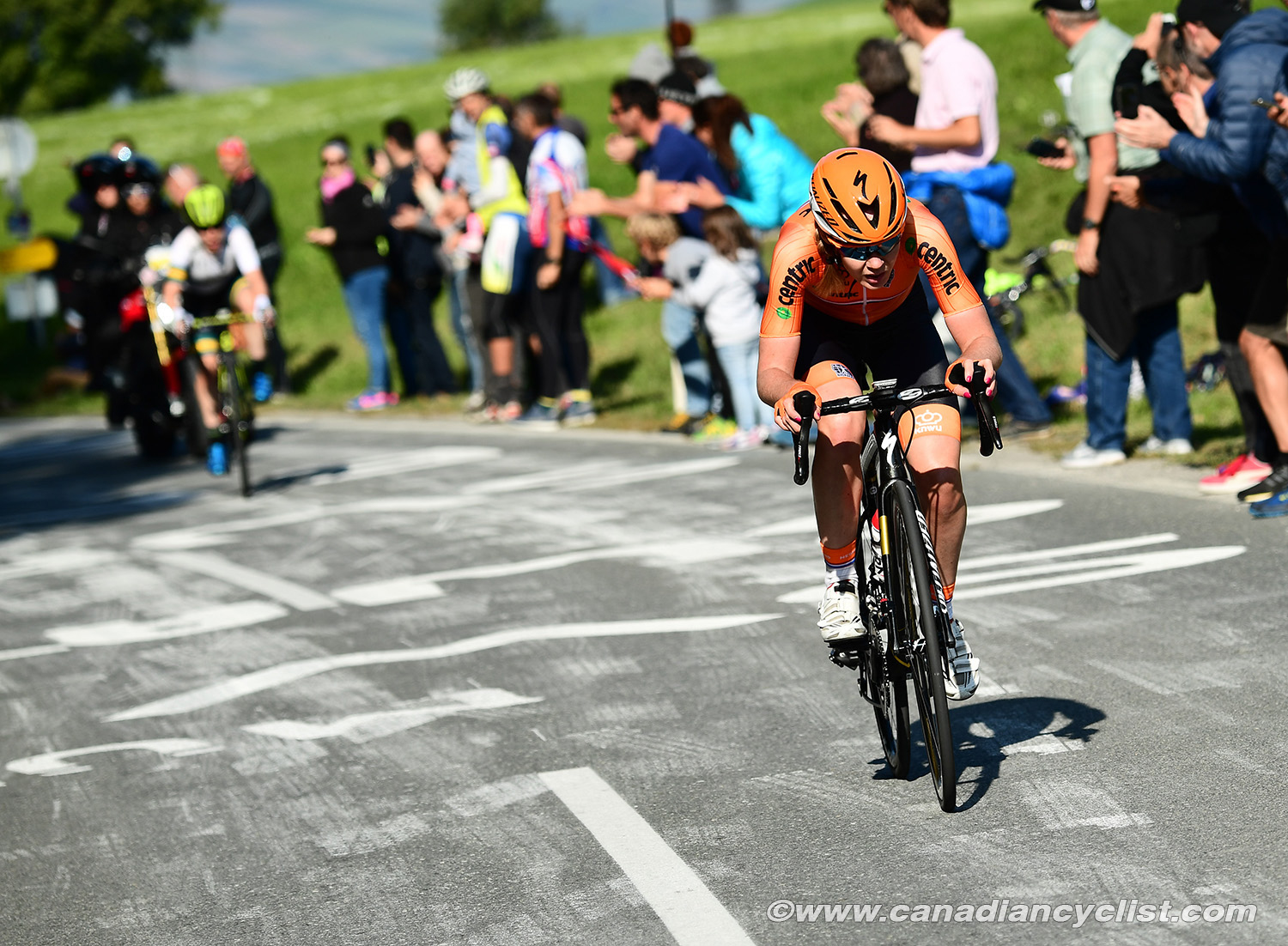 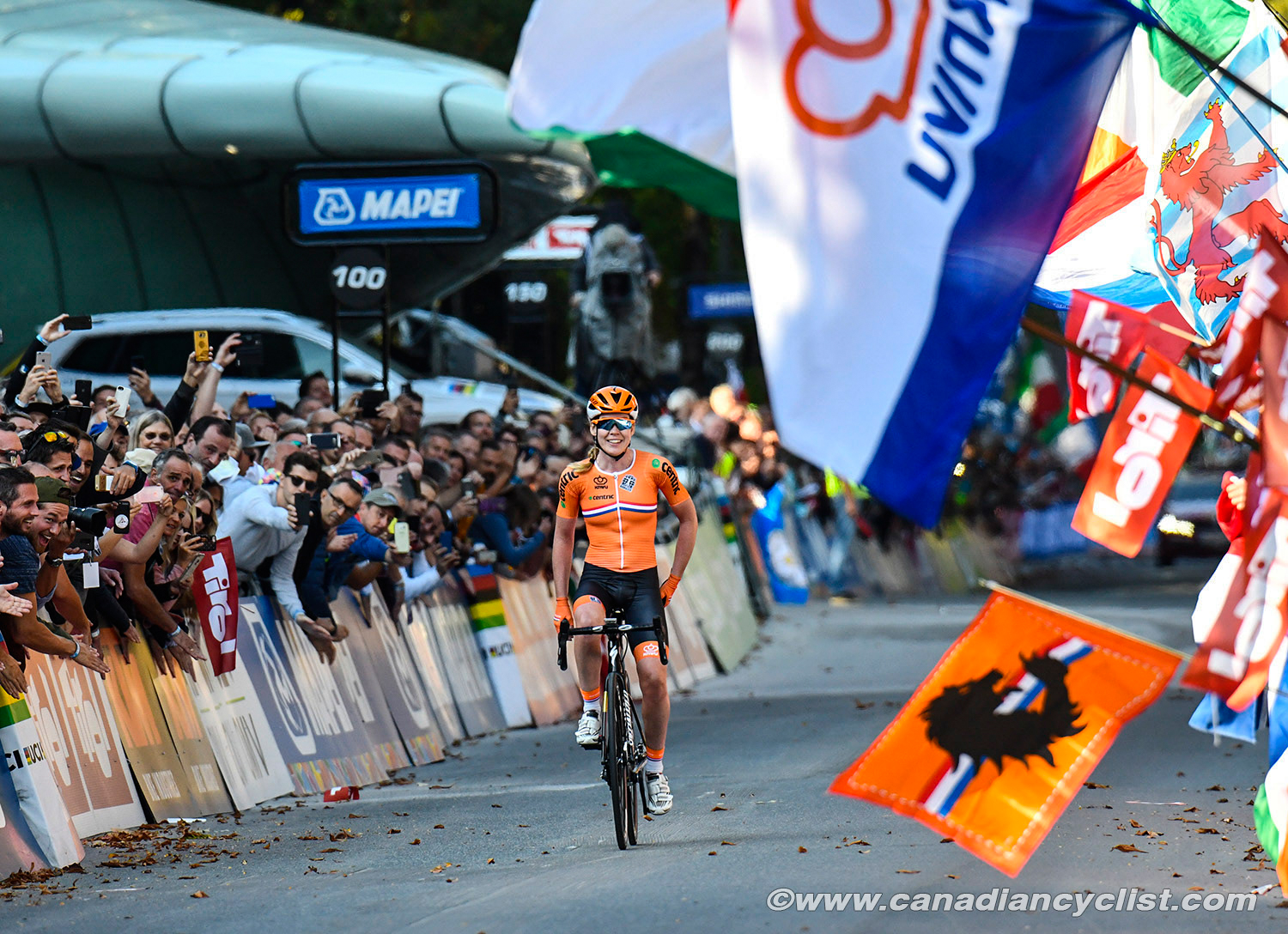 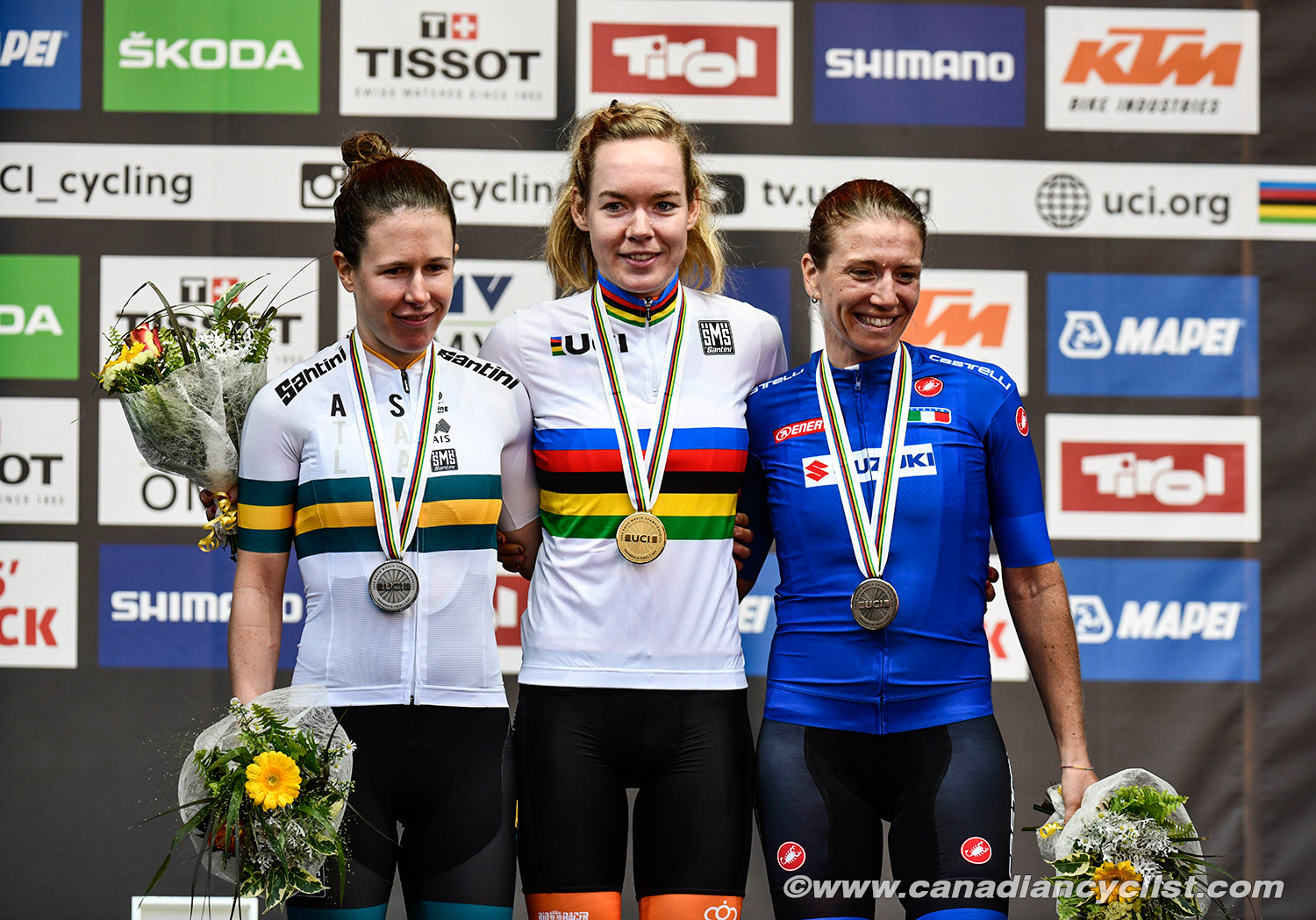 At the 60 kilometre mark, the riders faced the first significant climb of the day, the Gnadenwald, however, a crash on the early portion of the climb took down Poidevin, along with time trial world champion Annemiek van Vleuten of the Netherlands.  Poidevin made it back to the bunch, joining Alison Jackson, Kirchmann and Canuel.

The race became one of attrition on the eight kilometre Igls climb each lap.  Coryn Rivera of the USA attacked, with Ellen Van Dijk (Netherlands), Elena Pirrone (Italy), Emilia Fahlin (Sweden), Amanda Spratt (Australia) and Malgorzata Jasinska (Poland) joining her.  van der Breggen jumped across early on the second lap and attacked again, taking Spratt and Rivera with her.  The American was dropped first, then Spratt, as Olympic champion van der Breggen powered away to win her first world title ahead of Spratt by over three minutes.  Behind, Canuel powered a chase with Tatiana Guderzo (Italy) and Amy Pieters (Netherlands), which joined Fahlin, Jasinska and Rivera.  Guderzo attacked to solo in for the bronze, with Canuel, Fahlin and Jasinska sprinting for fourth, taken by Fahlin.

"It was a long race and hard," said Canuel, who was eighth earlier in the week in the time trial and won silver in the Team Time Trial.  "I had trouble following attacks, but I could hold my pace.  In the last climb I was able to get away with two other girls, and it worked for me to get my best [Worlds road race] result."

"This was my first Elite Worlds road race," said Poidevin.  "I got unlucky with the crash, but I was with two really strong Dutch riders, so I knew their team would keep the pace slow in the pack and I was able to chase back conservatively, and try not to burn too many matches getting back to the group.  There were a lot of attacks on the climb and it was super fast on the descent, so I just tried to position myself well, with lots of help from my team mates.  So I'm just happy to come away with a good result."

Zach Bell, manager for the women's race, said "We started today with a lot of good options for different parts of the course. After some hiccups with a crash early on, the team did great damage control. Sara [Poidevin] did well to climb with front group, and Karol-Ann and Leah did great work on the circuit to take advantage of tactical moves."

"The whole team rode at a world class level, and Karol-Ann finished it off with a great aggressive move. Anna [van der Breggen] was just so strong today, and a big congrats to her. Overall, I think this is a big step for Canada, and a clear demonstration that our women are at a world class level on the most challenging courses."