Canada's Allison Beveridge finished eighth in the women's Omnium on Friday, at the Track World Championships in Pruszkow, Poland.

Four countries shared the five titles awarded on Friday.  The Netherlands won two, boosting their count at the championships to four titles, while France, Italy and Hong Kong China each won their first rainbow jerseys at these championships.

Kirsten Wild of the Netherlands managed to defend the women's Omnium title, but it was a hard fought battle over four events.  Letizia Paternoster of Italy won the opening Scratch Race, lost the lead to Yumi Kajihara of Japan in the Tempo Race and then regained it in the Elimination race, to lead Wild by two points going into the final Points Race.  Halfway through that competition the two were still tied atop the standings, before Wild finally managed to gain two points late in the race and hold on for the title.  Jennifer Valente of the United States won the bronze medal. 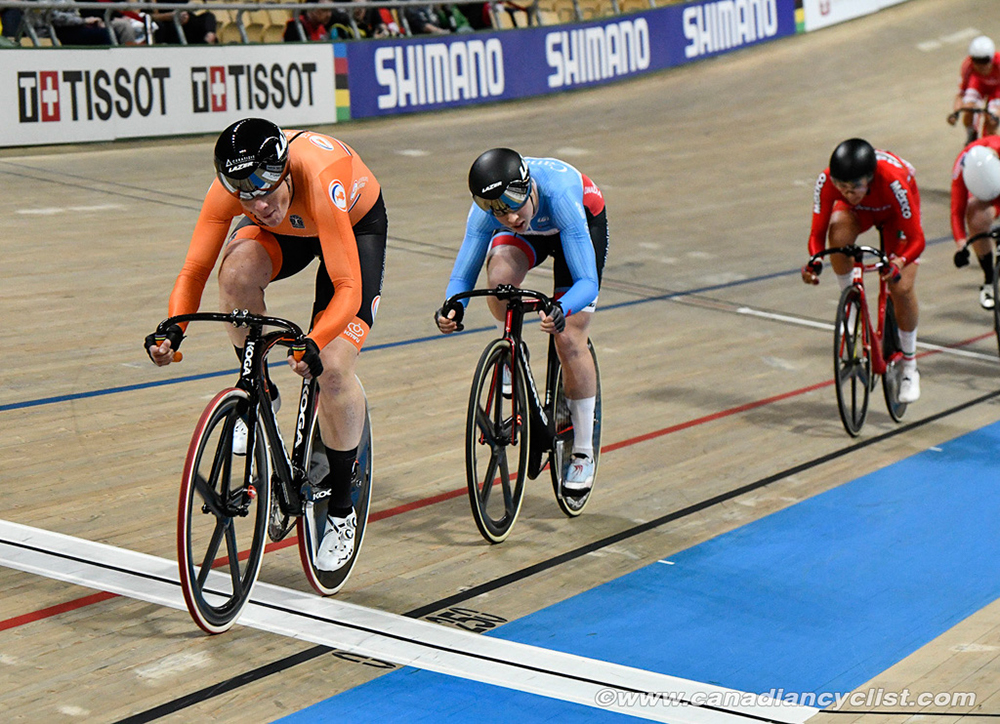 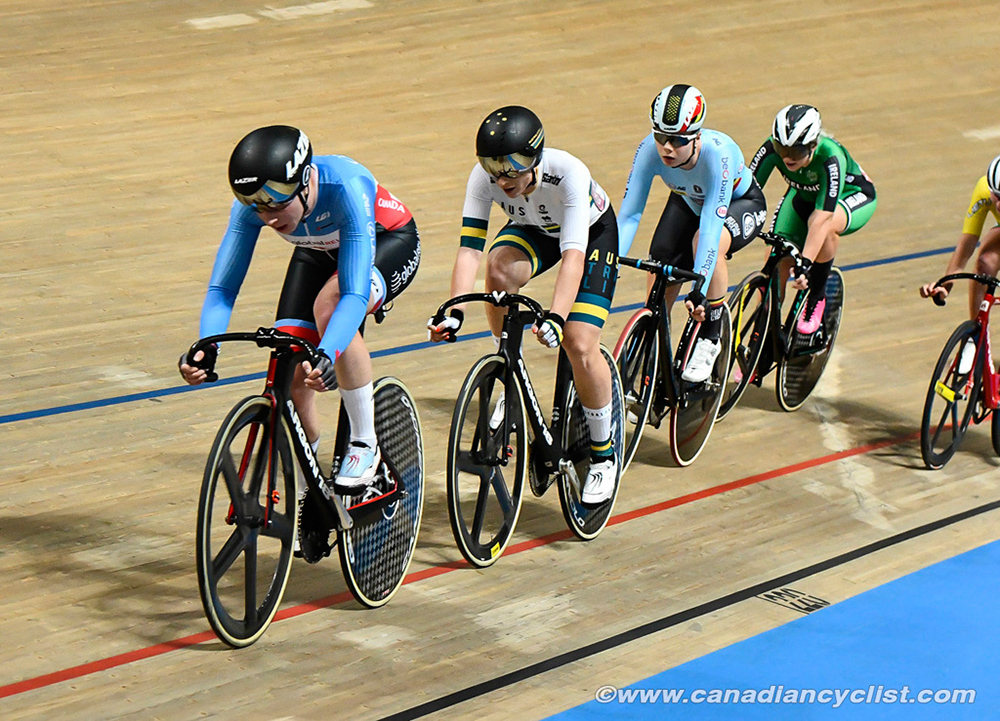 "This was a really, really hard one, against really strong riders," said Wild.  "It makes the win more special, and I'm really happy."

One day after finishing fourth in the Team Pursuit with three other members of Team Canada, Beveridge was on the track for the Omnium.  After an eighth place in the Scratch Race, and strong fifth in the Tempo Race, Beveridge was sitting in fifth place overall.  However, an unexpectedly early exit from the Elimination Race dropped her to seventh.  In the final Points Race, Beveridge was in numerous breakaways, but was unable to capitalize, falling to eight overall in the final standings.

Beveridge admitted that her Worlds preparation was more focussed on the Team Pursuit, which affected her rides in the Omnium.  "The Scratch went well for me tactically and I was just missing a bit of a finishing kick, and the Tempo went well also.  In the Elimination the wheels definitely came off a bit.  The Points Race was pretty rough, and I'm definitely missing some fitness - you can't fake it in that race."

The only other Canadian racing on Friday was Aidan Caves in the 1000 metre time trial.  Caves had a strong start in his race, but faded in the final lap and a half to end up 16th, with a time of 1:02.812 . 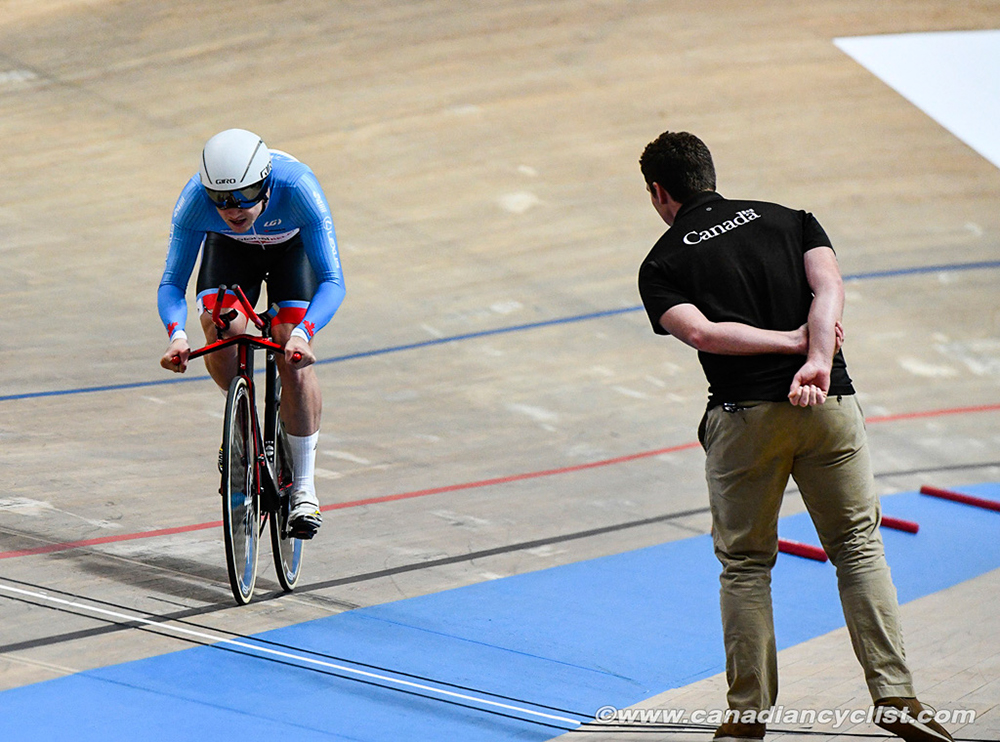 "My ride started really well," said Caves.  "We've been working on Kilos in training, and I did a 1:01 in Berlin [World Cup], so I was shooting for something close to that.  But it just hit me coming into the second last straightaway, and I hit a wall."

In the women's sprint competition, Wai Sze Lee of Hong Kong China became the first female rider from her country to win a world title on the track.  Lee came into the championships as a favourite after winning four rounds of the World Cup, and met the only other World Cup winner of the season, Stephanie Morton of Australia, in the final.  Lee showed she had superior speed, taking the title in two straight rides.  Mathilde Gros of France won the bronze medal. 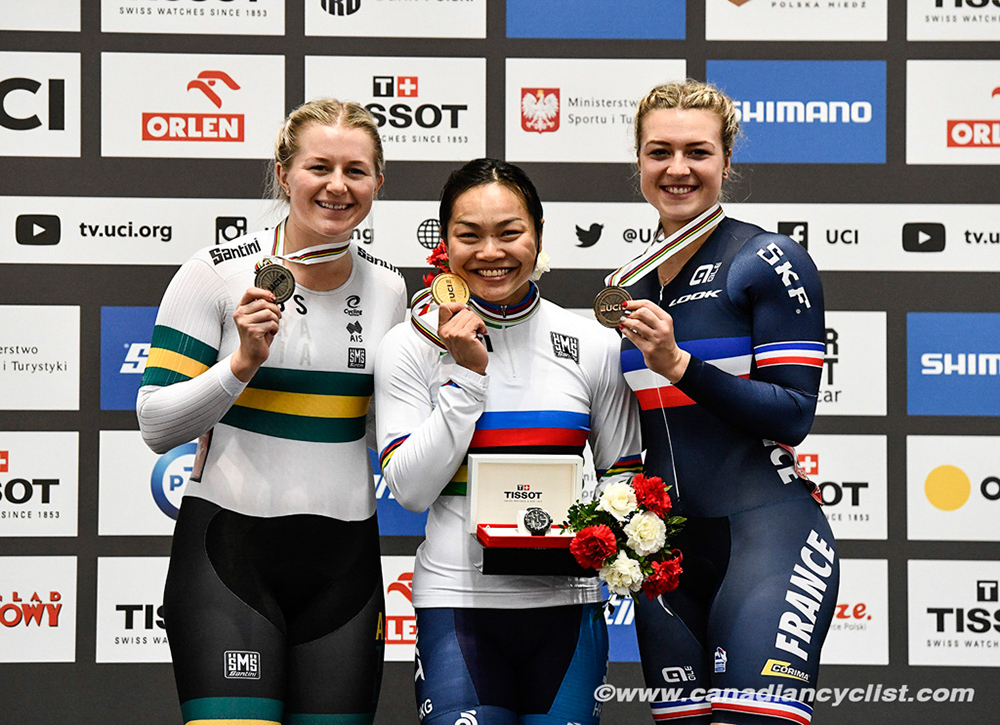 "I felt very nervous," admitted Lee, "I am usually more confident in the Keirin.  So, I am very excited and happy for this win."

The men's Points Race title was a wild battle, with four riders taking three laps on the field, and another nine taking two laps.  In the end, it was Jan Willem van Schip of the Netherlands who prevailed, after also winning six intermediate sprints, with 104 points.  Spain's Sebastian Mora Vedri was in contention until the final 30 laps before fading and finished with 76 points, while Ireland's Mark Downey and Poland's Wojciech Pszczolarski tied at 67 points.  Downey was awarded the bronze medal by virtue of a higher placing in the final sprint. 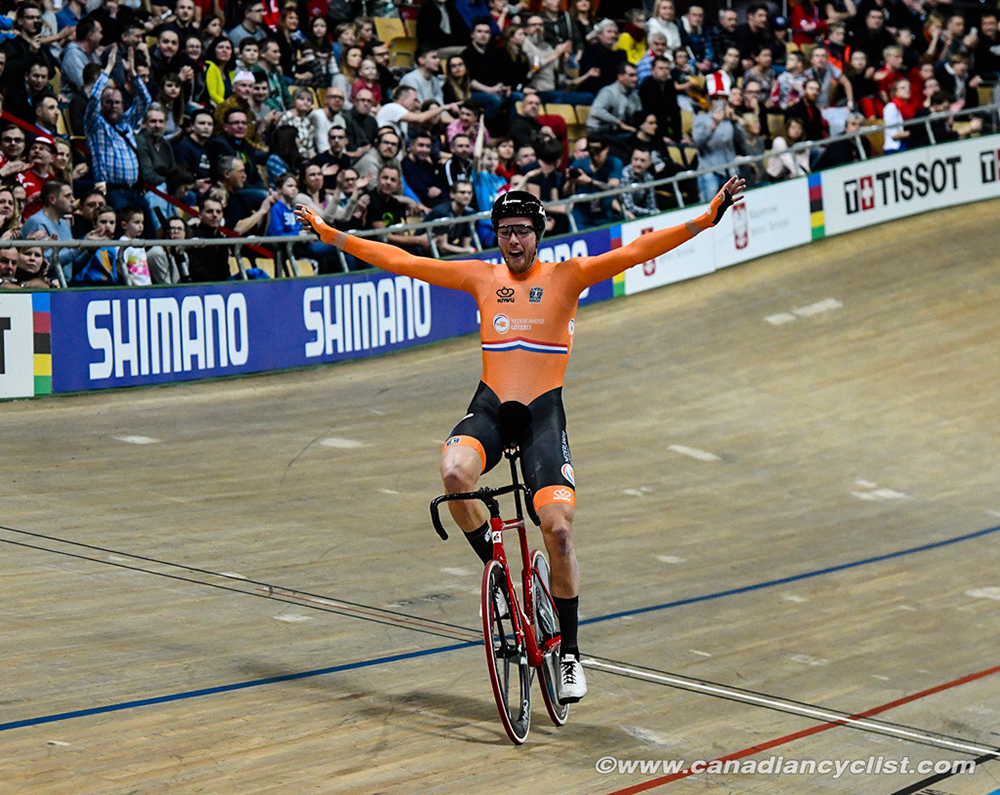 The other two titles were individual races against the clock, with France's Quentin Lafargue winning the 1000 metre time trial, with a time of 1:00.029, 0.359 seconds ahead of former champion Theo Bos of the Netherlands.  In the Individual Pursuit, defending champion Filippo Ganna of Italy came within two-tenths of a second of the world record in qualifying, and defended his title against Domenic Weinstein of Germany in the final. 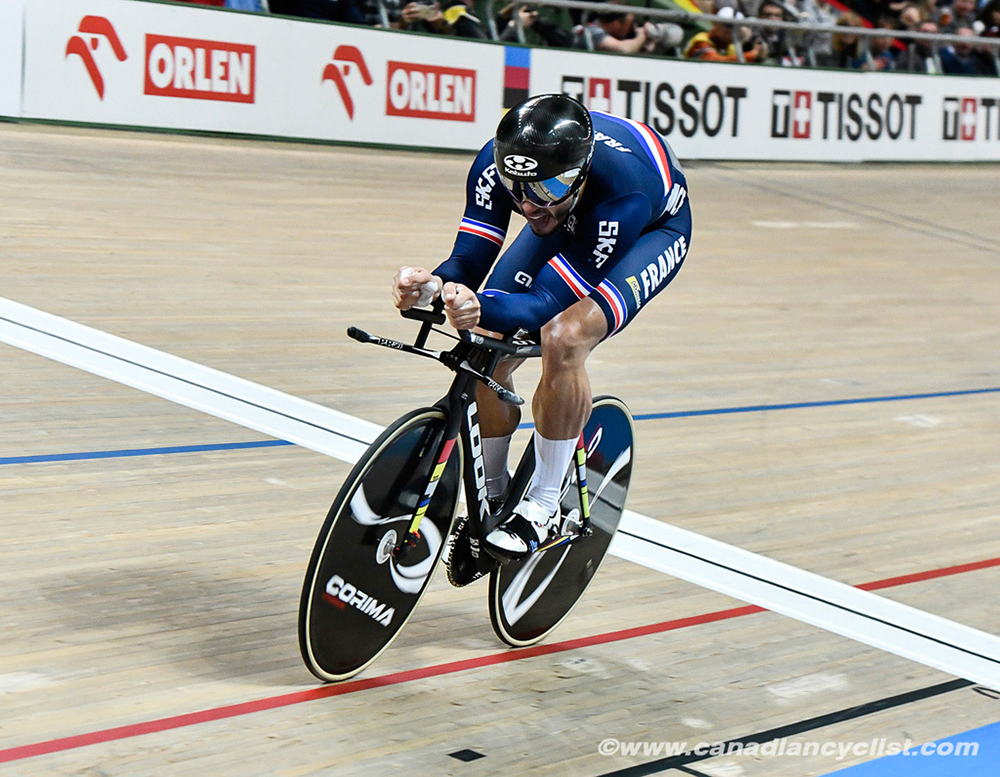 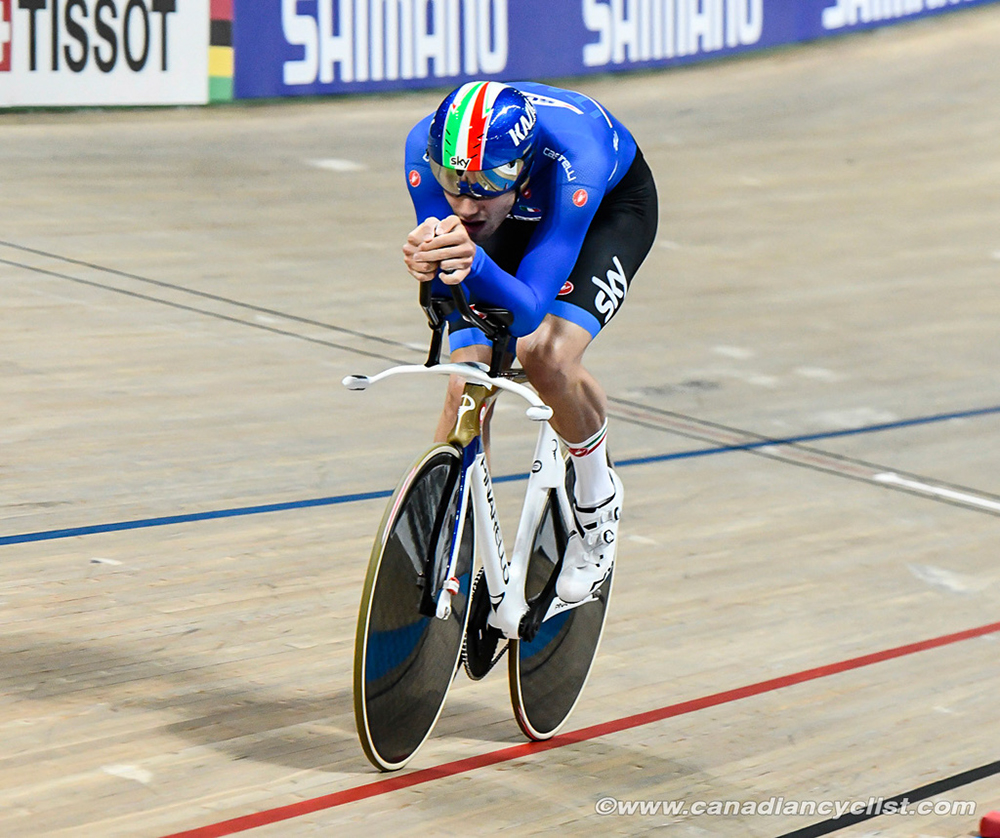