The 2019 UCI Track Cycling World Championships concluded on Sunday with the final four titles awarded in Pruszkow, Poland.  The Netherlands and Australia each took their sixth titles, while Germany won it's first and Hong Kong, China, their second.  In all, nine nations won the 20 gold medals awarded.

Lauriane Genest was the only Canadian competing on Sunday at the Track World Championships in Pruszkow, Poland, in the women's Keirin.  Competing at her first world championships, Genest, made it through to the quarterfinals before missing out on the semifinals by one spot, finishing 13th overall. 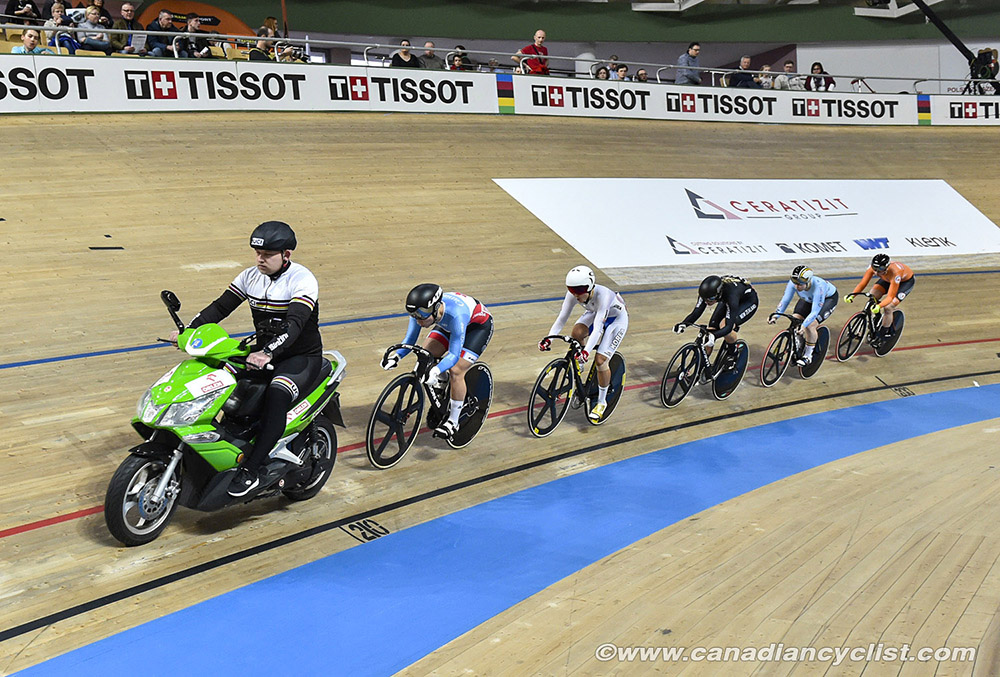 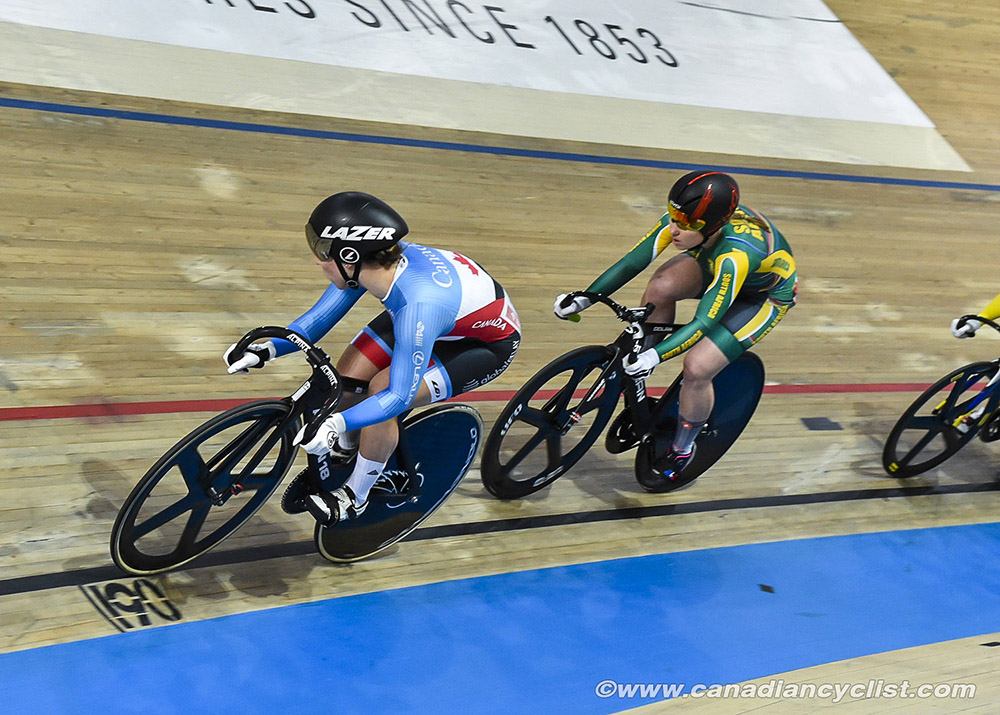 "I made a mistake in the first round and opened the door to the Belgian girl," explained Genest, "but I had a good repechage and made it to the next round.  I had good legs and wanted to make it to the top-12, so I'm a bit disappointed.  [In the quarterfinal] I was following the Japanese girl and she bumped [another rider], so I had to go up the track and lost a place.  But, I'm happy with what I did and I learned a ton.  I'm excited for the next season."

Overall, the Canadian team's best results were fourth places for both the women's and men's Team Pursuit squads, as well as a sixth place by Annie Foreman-Mackey in the Individual Pursuit and an eighth by Allison Beveridge in the Omnium.

Kris Westwood, Head of Performance Operations, said "We've seen an amazing progression from our men's Team Pursuit squad.  They broke the national record four times this season, finished on the podium at the World Cup, and managed to get fourth here at the Worlds.  That's historic.  So to build this program in the short period that we have is super positive."

"The women's program came a little short of our target here, which was to get back on the podium.  We looked like we were getting there; at the New Zealand World Cup we set one of the fastest times of the season for any team.  But in the final here we didn't nail it.  There were some simple mistakes that we have learned from and will move forward on."

"In the sprint competition, it was really encouraging to see Lauriane move through to the second round.  It's easy to forget that Lauriane has only been racing at this level for 11 months; her first international competition was the Commonwealth Games last April.  Every race she does, she is learning something."

"I guess the biggest disappointment was not to come away with any medals.  But the highlight to focus on is the men's Team Pursuit, that's an amazing story."

Alexandra Manly brought Australia their sixth world title in the women's Points Race, after having been part of gold medal winning Team Pursuit squad.  She took a lap on the field midway through the race, and scored points in the final sprint to jump ahead of Lydia Boylan of Ireland by one point.  Defending champion Kirsten Wild of the Netherlands took bronze.

"I can't believe what just happened, it is still a blur, it is so super special," said Manly.  "The plan worked out perfectly.  I conserved energy at the start but still managed to get points.  Then I recovered, recovered, recovered and when the moment was there I attacked.  I knew I had to go for a lap, as I knew I would need a big chunk of points if I wanted to be in the mix for the medals.  I just needed to stay composed for the final sprint, and I did."

The 50 kilometre men's Madison quickly became a battle between four teams - defending champions Germany, Denmark, Belgium and Australia.  The Australian team of Cameron Meyer and Leigh Howard took an early lead, but the German team of Roger Kluge and Theo Reinhardt gained a lap on the field to move into the lead.  The Germans were relentless from that point on, winning seven intermediate sprints and taking two more laps to finish with 105 points.  They lost the lead only once to the Danish duo of Lasse Norman Hansen and Casper von Folsach, when that team took a lap, but the Germans quickly took their third lap to cement their victory.  Belgium also took a third lap on the field to win the bronze medal ahead of Australia.

"It was not easy to defend the title," said Kluge.  "I think we were the favourites, but we were not nervous and managed to take a number of sprints, as well as the laps; we were always in the mix.  We had a great day."

The men's sprint came down to an all-Dutch final, with team mates Harrie Lavreysen and Jeffrey Hoogland meeting in the gold medal final, after having combined to win the Team Sprint title.  Lavreysen proved to be the faster one, winning the world title in two straight rides, with both under ten seconds for the final 200 metres.  Mateusz Rudyk took a very popular win in the bronze medal final over defending champion Matthew Glaetzer of Australia, to give the host nation their only medal of the championships.

"It was insane the times we saw today," said Lavreysen.  "I felt stronger than yesterday, and confident that today was the day.  I was nervous racing against Jeffrey, because he is more experienced and knows me really well."

The Championships concluded with the women's Keirin, and Wai Sze Lee of Hong Kong, China, won her second title, after taking the Sprint gold medal two days earlier.  Lee moved to the front on the final lap and rode away from the five remaining riders.  Kaarle McCulloch of Australia won silver, and Daria Shmeleva of the Russian Federation took bronze. 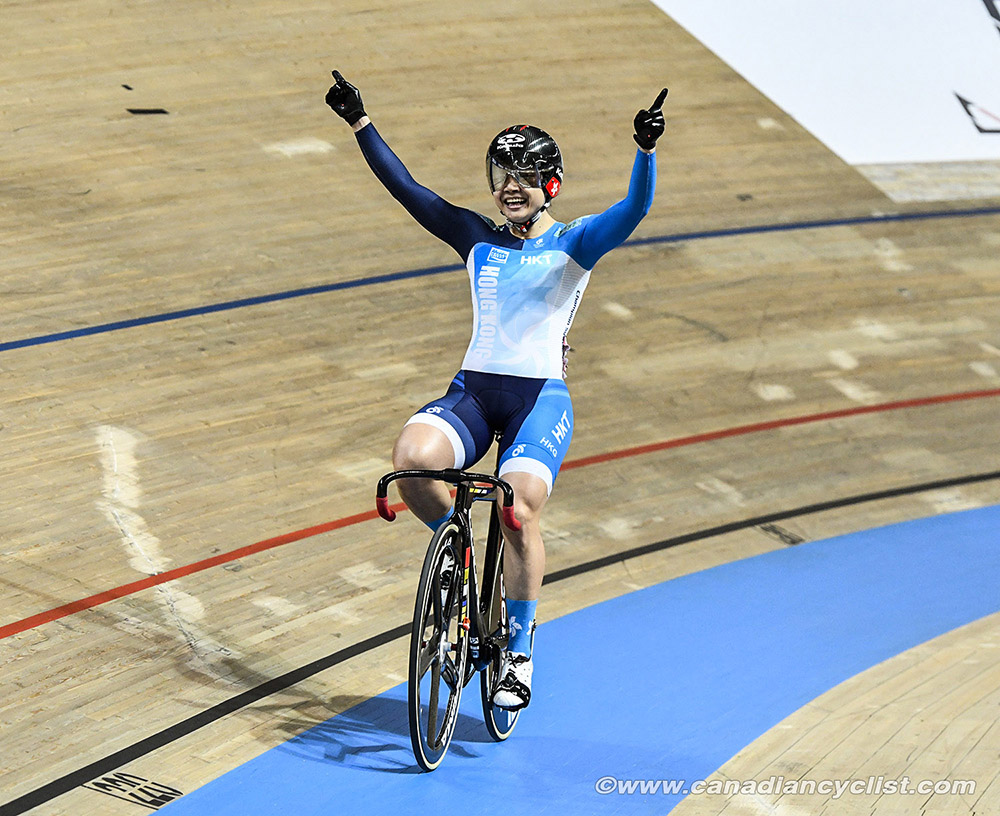 "It is unbelievable," said Lee.  "I thought I could do it, but the truth is so wonderful.  I knew I had good form, so I just kept in control, and then sprinted on the last lap."