Dorel Industries has reported its fourth quarter and year end results, with the Sports division affected by lower than expected consumer demand, particularly in the mass market Pacific Cycle segment.  During the year, Dorel sold off Sombrio and Sugoi.  The company says that they are expecting stronger results in 2019 from the Cycling Sports Group (CSG) - Cannondale - and e-bike sector. 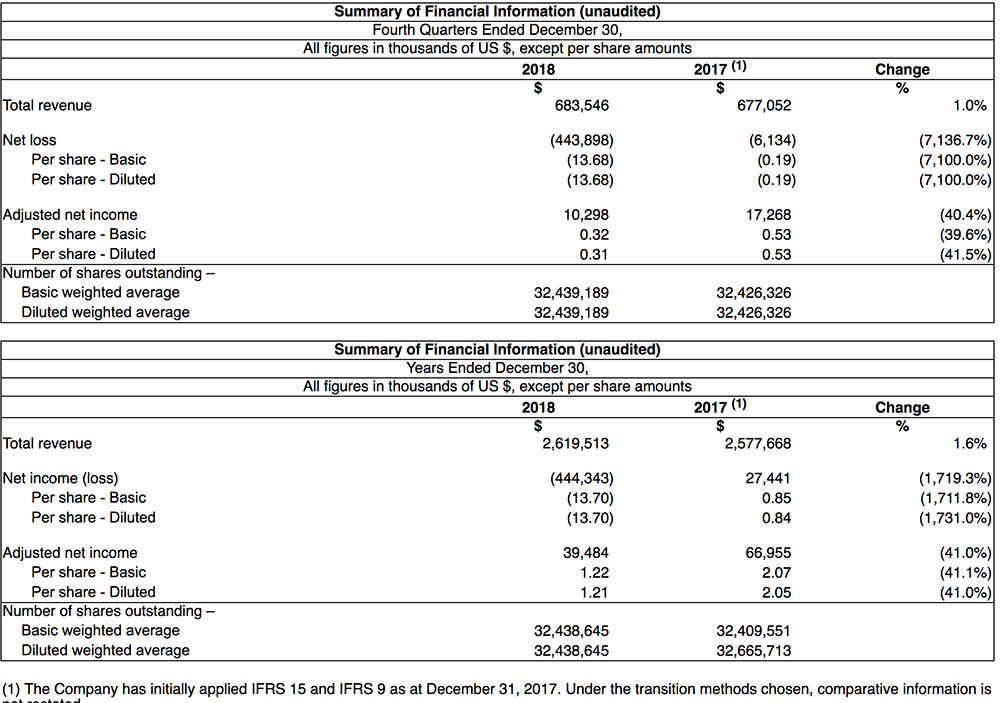 "Dorel Home has again performed well and continues to benefit from our market-leading innovations in e-commerce. At the same time, we were disappointed by fourth quarter earnings at Dorel Juvenile and Dorel Sports. Both segments were affected by lower than expected industry-wide consumer demand over the holiday season and the on-going changes in the consumer products industry. We are in the process of actively addressing these realities," stated Dorel President & CEO, Martin Schwartz.

Like all consumer products companies, Dorel is not immune to the impacts of a changing retail landscape and evolving consumer habits. Traditional brick and mortar stores - stores that existed as recently as 2018 - are shuttering as the buying patterns of consumers evolve.

We have recognized these new realities of retail require Dorel to be efficient, innovative, and nimble to maintain alignment with consumers. Dorel has been taking important steps to ensure that we can be competitive for the long-term and the online success of Dorel Home is indicative of this. Each of these new realities impact our business lines in different ways and require a unique approach to ensure the long-term success of each.

In addition to optimizing our global footprint, the restructuring program will also include assessing our business processes and related enabling technologies and identifying long-term cost savings and other efficiencies.

The implementation of the restructuring program will be on-going throughout 2019 with resultant benefits expected to begin later this year and extending into future years, leading to improved performance, cost savings and enhanced long-term returns for shareholders. Dorel will provide periodic updates to the market.

Fourth quarter revenue declined by US$4.1 million, or 1.7%, to US$232.7 million from US$236.8 million last year but grew by approximately 2.6% after excluding the negative impact of varying foreign exchange rates year-over-year and the divestments of the SUGOI and Sombrio brands in the second quarter of 2018. Cycling Sports Group (CSG) posted double-digit organic revenue growth and significant operating profit improvement, mainly from growth in Europe and in the U.S. sporting goods channel due to innovation in model-year 2019 products. In Brazil, Caloi also delivered double-digit sales and operating profit growth in Brazilian Reals, driven by a stronger mix of products, success with their 29-inch mountain bikes as well as with the Cannondale line. However, at Pacific Cycle, revenue and gross profit both dropped due to weaker than expected mass channel holiday POS on bikes and interactive battery powered ride-ons, as well as by retailer inventory reductions.

For the year, Dorel Sports' revenue increased by US$17.6 million, or 2.0%, to US$883.0 million and by approximately 3.4%, after excluding foreign exchange rate fluctuations year-over-year, as well as the divestments of SUGOI and Sombrio.

We expect to see a rebound in profits for Dorel Sports in 2019 with segment revenue forecasted to grow in the mid-single digits driven by price increases related to tariffs passed on to consumers at Pacific Cycle and volume and market share growth in CSG and Caloi.

Dorel Sports expects improved adjusted operating profit at CSG and Caloi throughout 2019. CSG growth will be driven by recent restructuring efforts and new product innovations particularly in the expanding e-bike category. At Caloi, we project increased sales with its expansion into the OPP segment and OEM manufacturing for retail and bike share programs.

Revenue and adjusted operating profit improvement at Pacific Cycle is expected mostly in the second half, based on the rapidly growing e-commerce channel, new customer distribution points and an expanded product line. This includes a broadened line of electric ride-ons and entering adjacent categories, such as scooters.