Catharine Pendrel (Cliff Pro) and Peter Disera (Norco Factory) once again had strong results in the XCC (Short Track) at Round 4 of the Mountain Bike World Cup, in Les Gets, France, on Friday.  Pendrel was tenth in the women's race, while Disera was ninth in the men's.  Both will start in the second row for the XCO on Sunday. 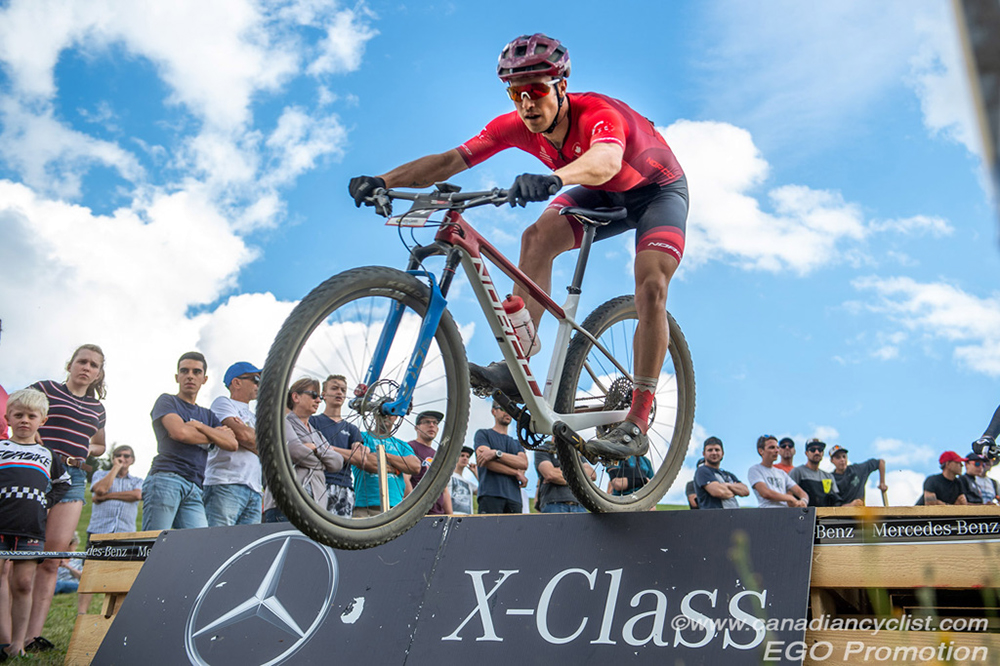 While not as high as last week's races in Andorra, riders still had to contend with an altitude of 1200 metres and dry, dusty conditions on a rough grass track with steep climbing.

The women's race had been whittled down to a lead group of ten riders with two laps to go in the seven lap race, when world champion and World Cup leader Kate Courtney (Scott-SRAM) attacked on the first climb of the second to last lap.  Pauline Ferrand Prevot (Canyon Factory), Germany's Elizabeth Brandau and Jolanda Neff (Trek Factory) formed the chase group, but could not make any headway on the seven second gap Courtney opened, on her way to winning her second XCC of the season and extending her lead in the overall standings.  Ferrand Prevot took second in front of a delighted French crowd, with Brandau pipping Neff at the line for third. 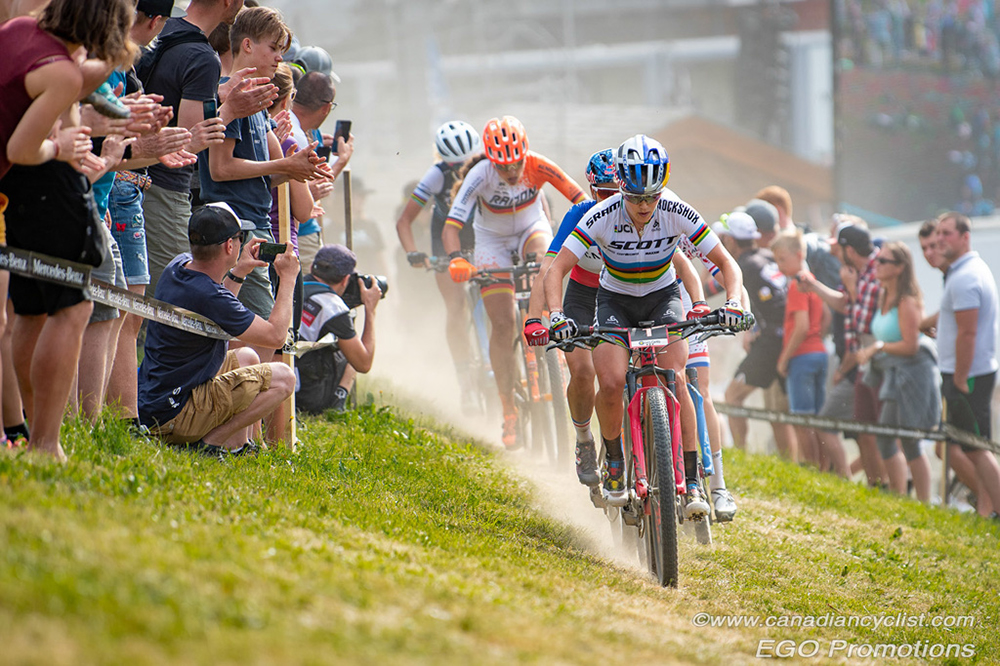 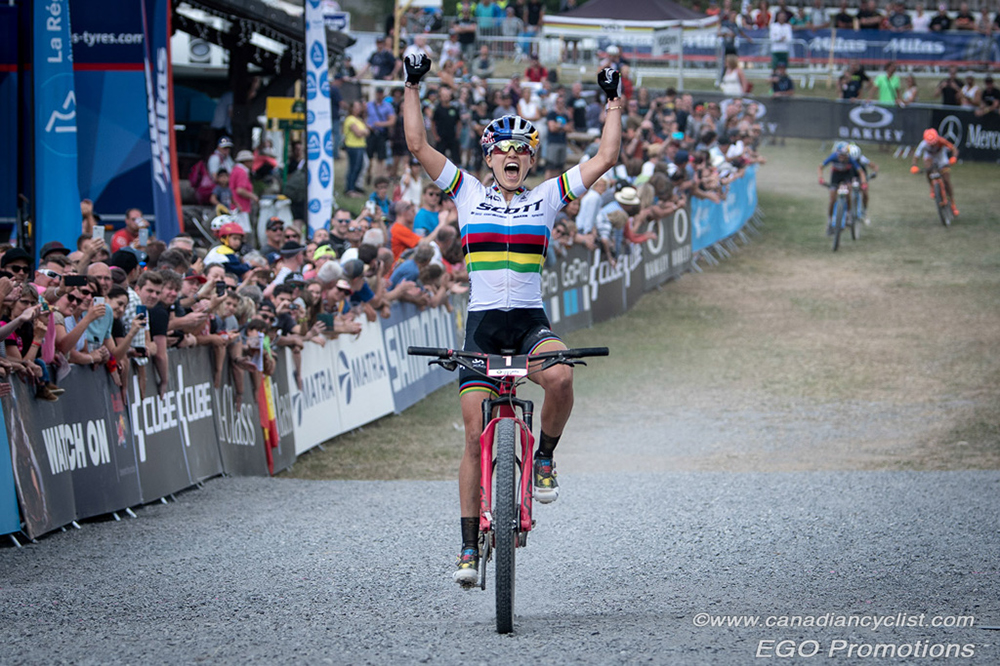 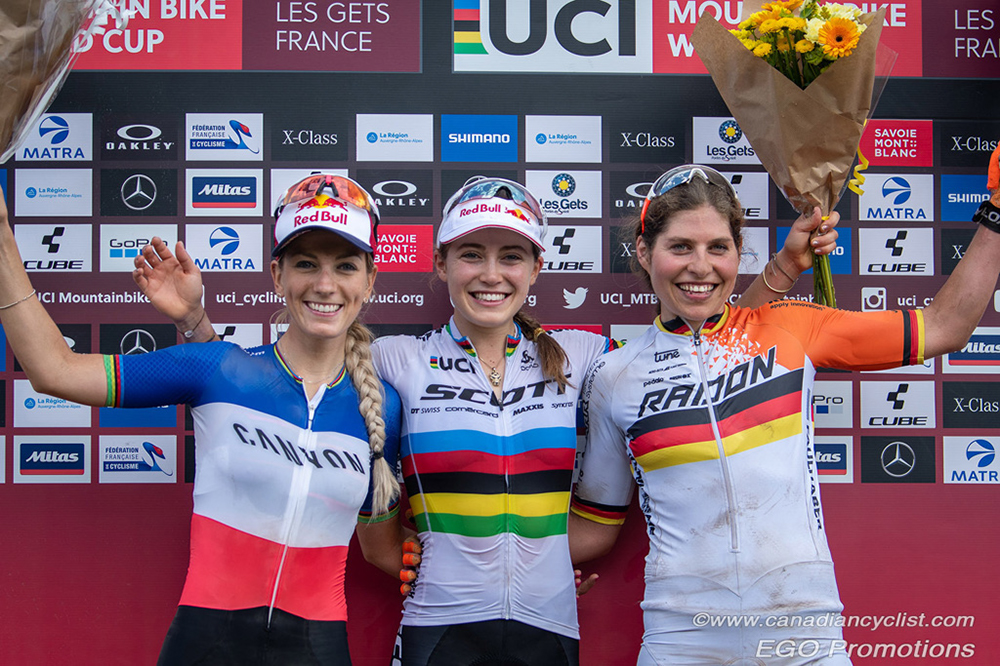 Courtney didn't have a set plan for when she would attack, "in these races you have to respond to what is happening, and we have had so many strong girls at the front that it is unpredictable.  Today, my plan was to embrace the moment, you have to be willing to 'risk big to win big', and I'm really happy it worked out today."

"I had a good race," said Pendrel.  "I feel like I am starting to get the short track game and positioning better.  They are still incredibly challenging, but I'm having fun and looking forward to Sunday."

In the overall standings, Courtney now leads with 1015 points, 125 ahead of Neff.  Anne Terpstra (Ghost Factory), winner of last week's XCO, remains in third, 320 points back.  Smith remains the top ranked Canadian, but drops to 11th from ninth in the overall standings, with Pendrel remaining 14th.  Batty improves one spot, to 23rd, while Walter falls one spot, to 30th.

The men's race saw the return of Mathieu van der Poel (Corendon Circus), who skipped the previous round, losing his overall World Cup leader's jersey in the process to world champion Nino Schurter (Scott-SRAM).  Henrique Avancini (Cannondale Factory), winner of the XCC last weekend, was aggressive throughout the nine lap race, spending more time at the front than anyone else.

Van der Poel was content to ride in the top five, keeping a close eye on Avancini and Schurter.  On the first climb of the final lap, Avancini launched a powerful attack, but van der Poel, Schurter and Victor Koretzky (KMC-Ekoi-Orbea) stayed right with him, setting the stage for a sprint finish. Avancini led up until the final 300 metres, when a small mistake allowed van der Poel to get by him, and the Dutch rider launched a massive attack out of the last corner with 100 metres to go, which no one could respond to.  Avancini took second, with Koretzky beating Schurter for third.

Van der Poel hasn't raced mountain bike since winning the second round in Nove Mesto, six weeks ago.  "I haven't had any competition for a long time, so I tried to save as much energy as possible.  I knew it would come down to a sprint here, and I felt pretty good.  I wanted to take the lead in the last corner because I knew it would be impossible for someone to come over me.  I was searching for the point to start my sprint two laps before the end, and I saw the 100 metre sign in the corner."

Disera moved into the lead 15 within the first couple of laps, and into the top ten with four laps to go.  He maintained his spot through the final laps as the pace picked up, missing a front row start for Sunday's XCO by one place.  Canada's second rider in the race, Leandre Bouchard (Pivot Cycles-OTE), moved up through nearly half the field to finish 18th, which will allow him to start on the third row for the XCO. "It was super dusty and quite crowded through out the course," said Disera.  "It ran like more of a CX [cyclo-cross] race than a traditional short track - positions were difficult to make up without massive efforts.  I wasn't sure how it was going to play out; midway through the race I found myself slipping a little but managed to claw back and bridge a gap that had formed.  I am stoked for second row on Sunday. Looking forward to the XCO."

In the overall standings, Schurter continues to lead, however, van der Poel moves into second from third, only 85 points behind.  Mathias Fluckiger (Thomus RN) drops to third from second after finishing 15th in the XCC.  Disera jumps one spot in the standings, to 14th, while Bouchard moves up five spots, to 46th.