The sun shone once again for the GP Cycliste Quebec WorldTour race on Friday; remarkably, it has never rained in the ten year history of this race.  Michael Matthews (Team Sunweb) successfully defended his title in a sprint finish against Peter Sagan (Bora - Hansgrohe) and Greg van Avermaet (CCC).  Hugo Houle (Astana) was the top Canadian, finishing 15th, while Evan Burtnik (Team Canada) finished second in the KoM competition, after spending most of the day off the front of the race in a break.  Mike Woods (EF Education First) finished 17th and James Piccoli (Team Canada) was 22nd, the only other Canadians to make the lead group. 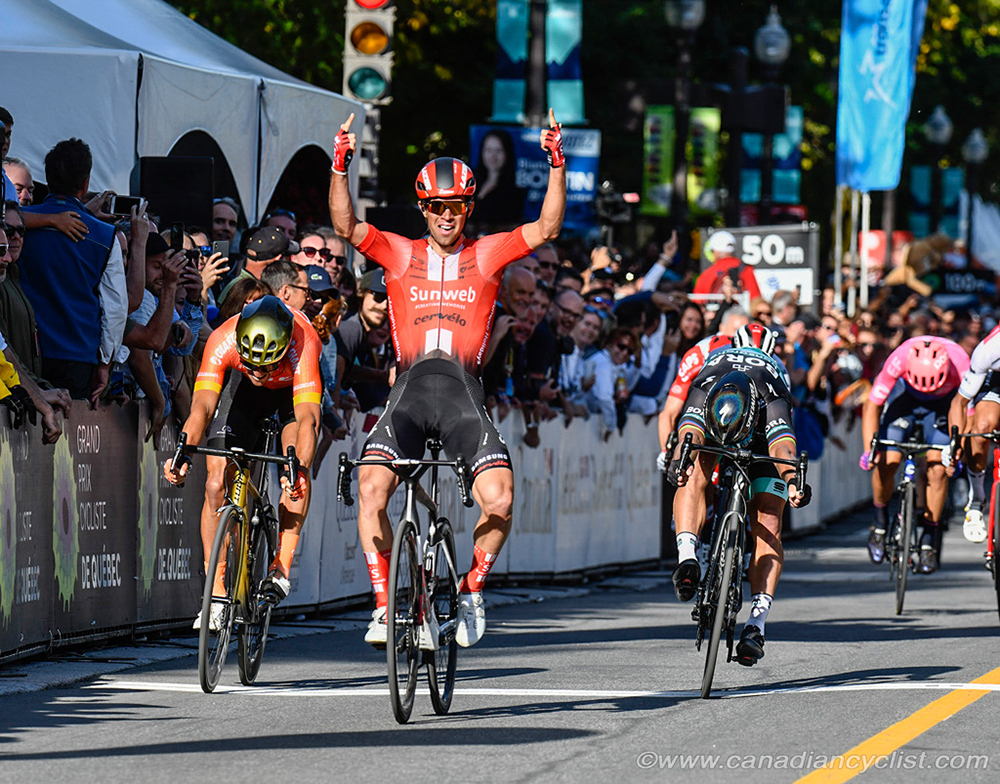 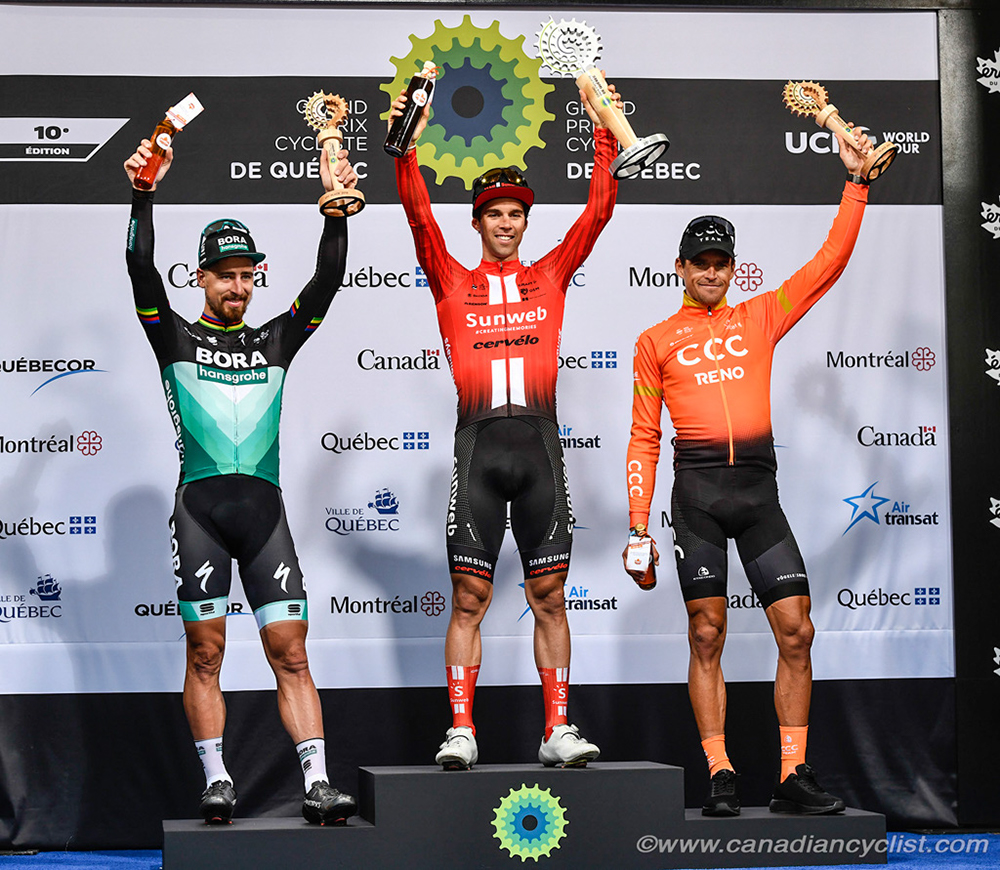 As usual, the race began with an immediate breakaway effort by six riders, including Burtnik and team mate Adam Roberge.  The group quickly moved to nearly eight minutes clear before the top teams decided the gap was getting too large and upped their tempo, bringing it back to a more manageable five minutes. 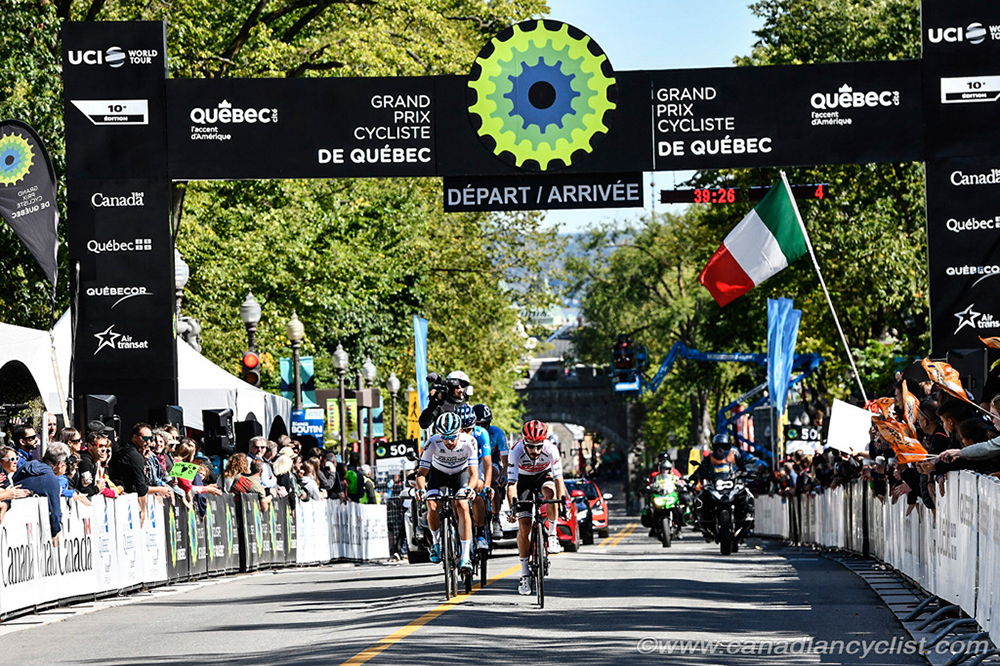 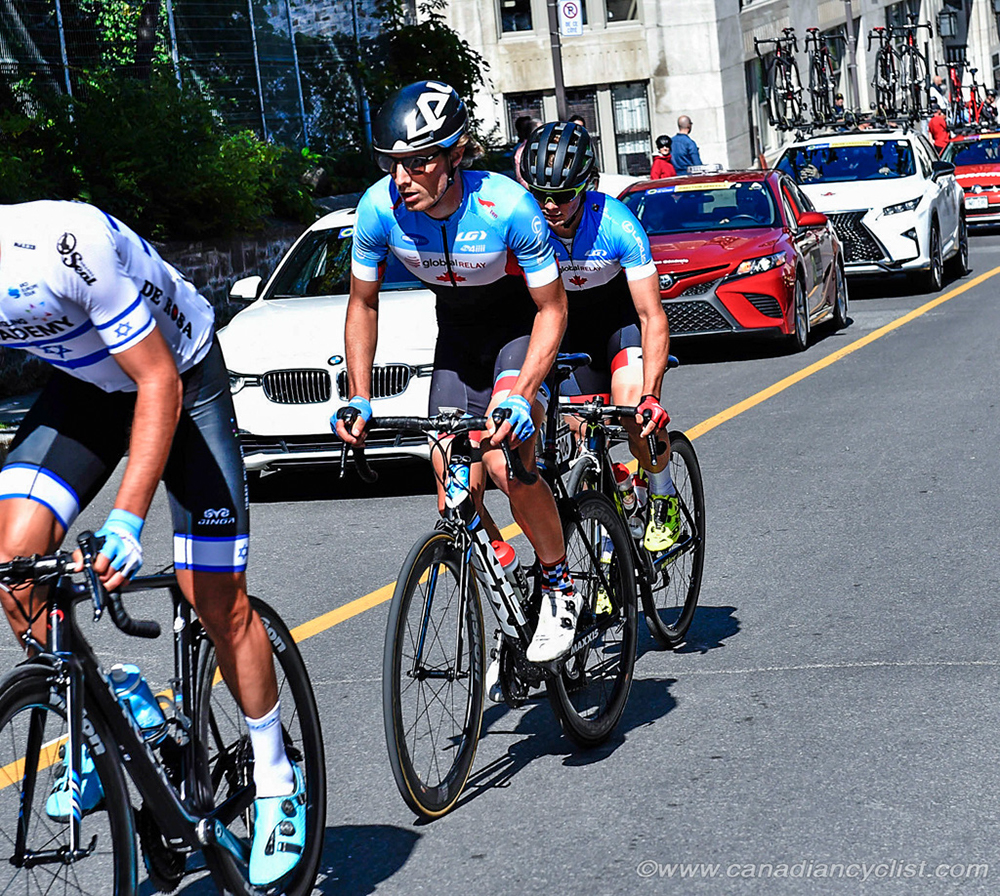 Van Avermaet's CCC team did much of the early chasing, assisted by members of Bora-Hansgrohe and Sunweb.  Roberge then crashed on Lap 7, and left for the hospital clutching his left shoulder - it is not confirmed, but likely a collarbone injury.  Two laps later, Guillaume Boivin (Israel Cycling Academy) went down after running over a bottle, and also looked to have injured his shoulder or arm. 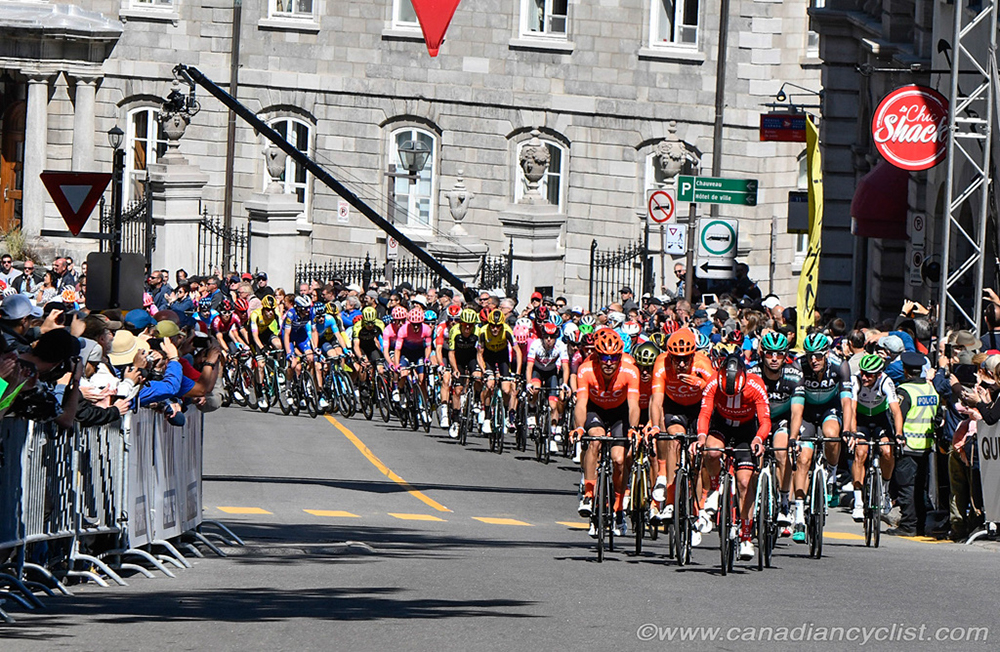 At the front, Burtnik was busy racking up points every lap for the KoM title, but he was up against a huge barrier - the last lap carried a 25 point payout, and his efforts wouldn't be enough after Julien Alaphilippe (Deceuninck-Quick-Step) took the last KoM.  Burtnik would finish second with 17 points.

The chase began to increase speed with five laps to go, taking the gap down to 2:43.  Team Canada's Nick Zukowsky attacked and then jumped on the wheel of Vincenzo Nibali (Bahrain-Merida) as he shook things up.  With 50 kilometres to go the gap was under a minute, and the group was caught with two laps to go.

A few attacks went nowhere, until Alaphilippe went hard up the two climbs on the last lap, taking Sagan and van Avermaet with him.  Matthews was out of position with the chasers, but the group came back together in the final kilometre for the final false flat run to the finish line.  Matthews attacked early, jumping to the right and catching the others by surprise.  He had enough time at the line to sit up, look over his shoulder and roll across the line with his arms in the air. 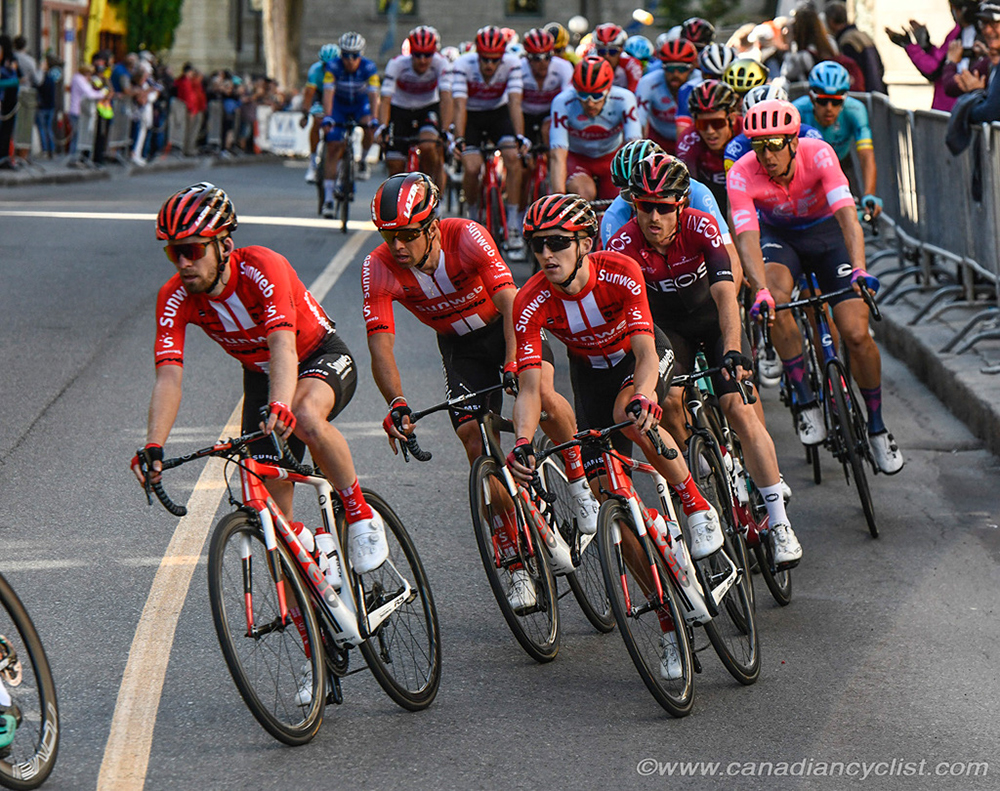 "I'm very happy that the hard work is finally paying off," said Matthews.  "I worked super hard after the Tour to get ready at the end of the season, and it's nice to get something back to all the hard work since my crash in Paris Nice and then after the Tour de France."

"I'm super happy to come back here, people are so passionate about cycling in Canada and the feeling is incredible. It's a beautiful place to race.  The feeling is different compared to last year's victory. I had a really bad season and I won here, so I was very emotional. Today, I just feel super privileged and blessed to have the chance to be here."

"In the last hills, I was really too far back but I did a massive effort in the climb to get back at the front.  I am super happy to cross the finish line first today after these mistakes. I really want to enjoy this moment and celebrate with the guys who did a big job today." 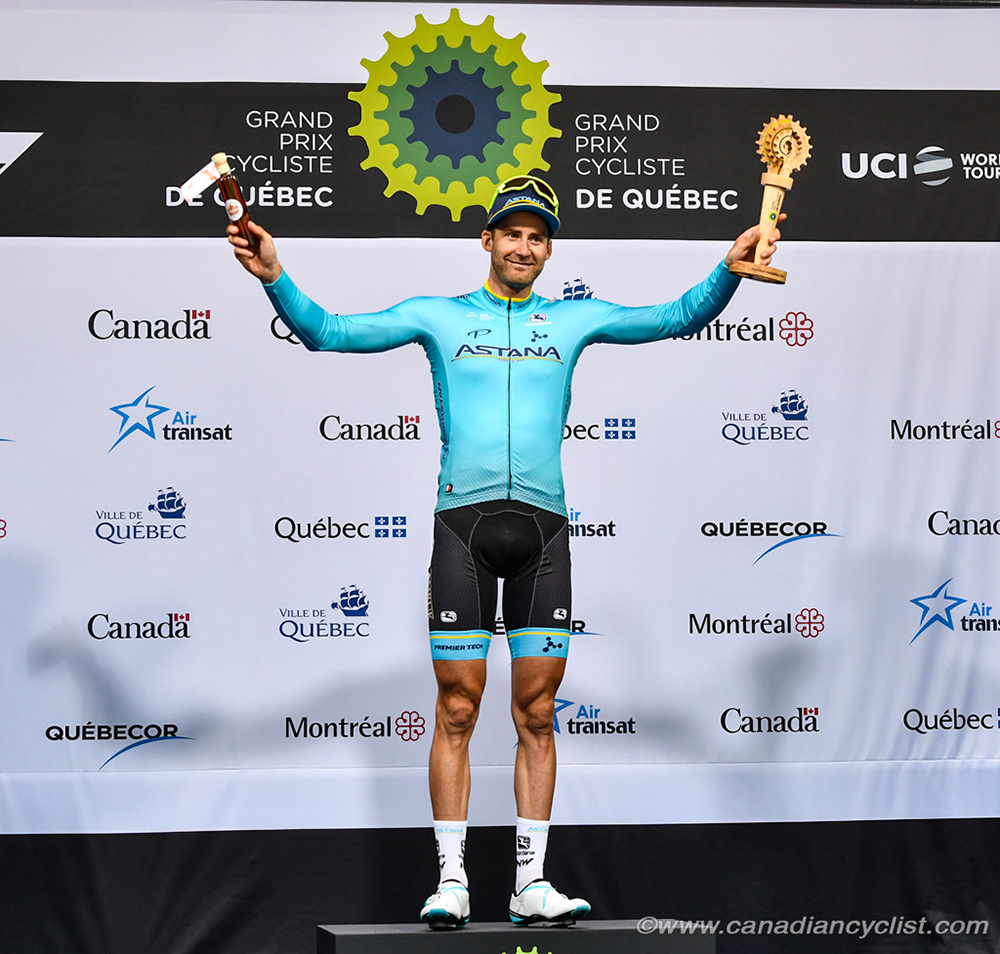 "Not an easy day for me," said Houle.  "I suffered a lot in the last two laps, but as I was at home I held on until the end.  I gave it all in the last 200m but, to be honest I don't really remember what really happened."

"We had the best in the world here today and only a few days before the World Championships, so I'm very happy to be able to be there and do the race I did."

"That was a long day in the saddle," said Burtnik, "I've never been out front that long before.  The plan was to get at least two of us in the break and get the KoM jersey.  It's really tough because the points snowball at the end, so you have go all in and last until the last few laps.  I'm pretty happy; it's my first ever WorldTour race, so it was a great experience."