Today, we are going back to May 9, 2014, and the first stage of the Giro d'Italia with Svein Tuft. The first Grand Tour of the season opened in Ireland that year with a Team Time Trial, and Svein's Orica-GreenEdge team won, with Svein crossing the line first to become race leader and don the Pink Jersey. It was also his birthday. Svein held the jersey for the next stage before passing it on to his team mate Michael Matthews.

Svein spoke with us from Andorra, where he is living with his family.

It's funny that you brought this up with me now, because I've been rehashing it with some of boys from that team. So, it's pretty fresh in my head because we've been going over that.

I think one of the things that stands out the most is that, while you are in the sport and grinding away with horse blinders on, always looking to the next thing, you never really realize that some of these moments could be the highlights of your career. For me, looking back, it was that.

But for the fact that ... you know we race bikes to win bike races ... but for me, the most amazing part of the day was that I was up on the stage with some of my best friends. 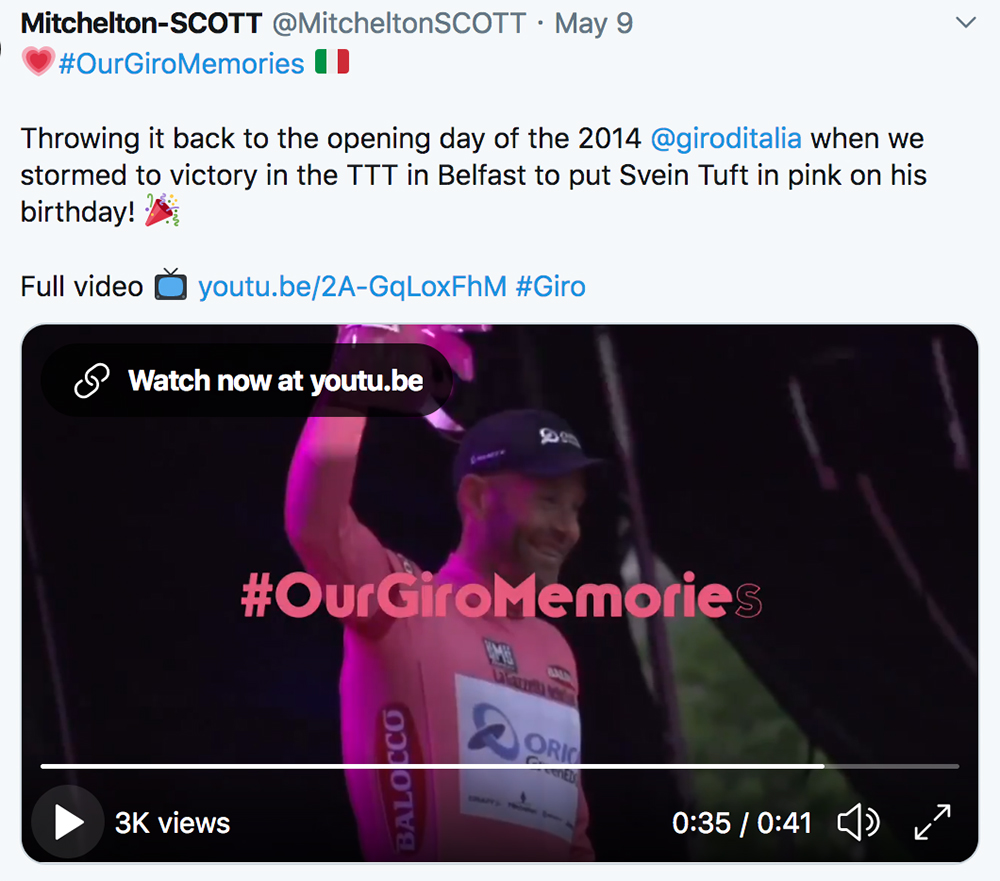 I think of the couple of days prior and our training ... everything went absolutely sideways ... we were out in the middle of nowhere, it's pissing rain, guys are just doing stupid stuff like riding at 700 watts just to show that they were good for it; that kind of pre-Grand Tour nervous energy.

So, we were having these blowouts on the road and then it all suddenly comes together beautifully on this day. So we won, but it was scripted, with Whitey [team director Matt White] saying in the pre-meeting, ' we make sure Svein makes it over the line first'.

I was just sitting there shaking my head. You cannot plan or design that, because it is however the line is. You've got nine guys, you don't know how many are going to finish, you have all these variables; if I've done my job right, I'll be absolutely fucked in the last couple of Ks [kilometres]. So, I'm just shaking my head; nice gesture, but ... and then, sure enough, it panned out that way.

Another amazing thing about that day is ... they say that a lot of your best days are out training, and you just wish to have those kind of days when you are racing. And I certainly had one of those days. Looking back to my final pull, it must have been over a K long and I can't imagine trying to replicate that same power and energy ... It was like nothing I have experienced, and I'll remember that for the rest of my life. But just being up on the stage with those boys and getting to enjoy it in our own way, was everything.

I asked him if there is anything that he remembers that stands out about the course or the day.

There's a few things ... it was in Ireland, so it was beautiful weather [laughs], I mean it was wet roads and probably 8 degrees [Celcius]. The course was a nice course with some good power sections, but it had this pretty decent climb, where they made the road totally pink. It was loaded with people and a pretty decent drag at 5 or 6 percent towards the top. If you look at our team time trial squad, it was made up primarily of some big boys and the way we rode those kind of things was crucial; we were all about steady massive power, but if some of our boys get blown out [on the climb] you can lose them there on the climb. So, I remember taking [team mate] Pete Weening aside and saying, 'Mate, if you find yourself on the front on that climb, you swing off'.

He was the strongest climber and would just blow the doors off on even [his] easiest pace. He wasn't doing a lot of work on the flats because we only wanted people on the front who could lift or maintain the speed. But a guy like that would be lethal on the climb.

So, sure enough, he's on the front when we make the corner onto the start of the climb! And he just had everyone under the pump. It was probably just the crowd and everything was crazy, and he got excited. Everyone was just screaming into their helmets and Whitey's on the radio, but no one could hear it.

We were lucky that Durbo [Luke Durbridge] was on a really good one and he was able to swing in front of Weening and totally shut down the pace to a rideable pace. It was a really mature move for a young rider, but basically he saved our ride. We could have lost two bigger guys there we needed for the rest of the race.

In a team time trial at a Grand Tour, with nine men, there are so many variables that can happen, so that stands out, because it could have made or broken our win. I'm not saying Weening did the wrong thing, it's just how racing is; you get in there and sometimes you just get carried away ... you feel good ... and he was probably thinking, 'I'm not going that hard'.

But the other guys have been riding on the front in 40 second turns at 600 watts, so the legs are feeling it and they also have to do another 10K after that climb.

There's crucial moments ... I don't know if you remember, but the Garmin team went down and we passed them on the road and it looked disastrous. Every corner was a bit of a risk; in order to win you were always slipping a tire out or whatever, you were on the limit because you had to, to win it. And you knew the Quick-Step boys were doing the same thing [Omega Pharma - Quick-Step finished second by five seconds]

I asked Svein, who was not a Grand Tour team leader type of rider, what it was like to actually have the opportunity to lead the Giro.

For me, it was more about the effort of the team time trial. I always knew that it was my role to make sure Bling [Michael Matthews] had a good ride the next day, so I didn't really enjoy the day in pink at all.

First of all, it was pissing rain right from Kilometre 0, and I was super late to the stage [for presentation and sign-in], so the organizers were really pissed - we got stuck in traffic or something crazy. They built up a pink bike for me ... it was just mayhem.

And you are trying to get to the stage, and you realize that's what these poor guys have to go through every day. People just trying to stop you and whatever ... they have to deal with so much extra stress. I think of the guys that have to wear the jersey day in and day out after getting it early on, and it must be so much extra stuff. So, I really didn't enjoy it; I love more that I came there to win the team time trial with the team and do my work as a team rider.

I hated that the next day [Stage 2, when he was in pink] that the boys were doing all the work ... I wanted to go do swap-offs up there with them and help control the race. But that was my day and Michael got it the next day.

It's not like I had a big glory moment, riding around and flaunting the jersey. I don't think the jersey really came out at all that entire day; I was wearing a rain jacket.

But the rest of that whole Tour was epic and there's a ton more stories, but for me, it was mostly the day with the boys on the stage and that we had accomplished something quite big ... it was just a beautiful moment.