We begin our Revisit of Mont-Ste Anne with Alison Sydor, one of the greatest mountain bikers in the history of the sport, with three world titles, an Olympic silver medal and 17 World Cup wins, including once at MSA, in 1996. Alison also finished second once (1995) and third twice (1997 and 1998). 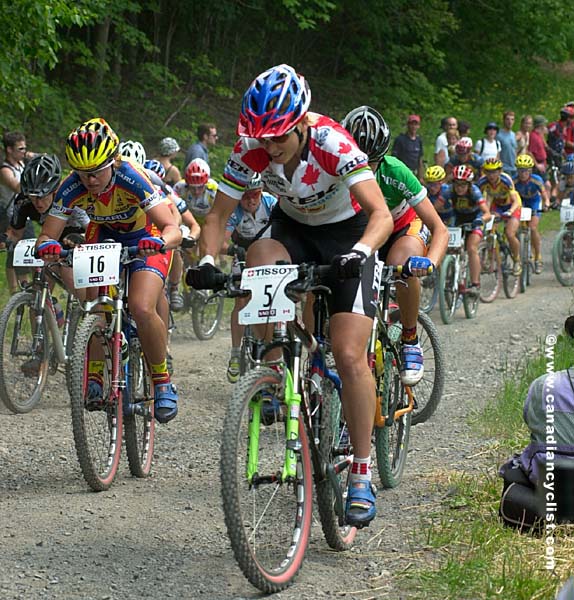 Alison spoke to us from her home in North Vancouver.


That was a really great memory [1991, her first international level mountain bike race at MSA]. It was so funny to be at the beginning ... the early days of a sport. Some of the memories now are funny to think about. I had wanted to get into mountain biking and had gotten a bike from Rocky Mountain, and there was the Grundig Cup happening, and I needed something to do between two [road] events that were happening in Quebec. A local racer billeted me and I got support from the local [Rocky Mountain] distributor.

Being kind of new to mountain biking, they asked what events I wanted to enter. I knew cross-country, but he [the distributor] was like, 'I think you should go in everything', and I was, 'What ... I don't know about that!'. Before I agreed I said he had to take me out on all the courses. So, we did a lap of the cross-country, then rode up to the top [there was an Uphill race in those days], and then we came down the downhill, and I totally crashed my brains out, it was a terrible crash, and I said 'No downhill'. Then he took me to the Dual Slalom course and I crashed there too, so no, I'm not doing the Dual Slalom. So I decided to enter the cross-country and the uphill events. [Alison won the uphill and was fifth in the cross-country]

One thing I do remember ... that was my first big cross-country race; I'd done a couple of local races but nothing like this. So, I didn't really appreciate the demands of cross-country mountain biking and I don't think I took any water, nothing! I was so bonked after ... I'd never experienced fatigue like that.

Mont-Ste-Anne wasn't what it is now, and the only thing I could get [to eat] was a hot dog, so the rep went and got me a hot dog. Powerbars [nutrition bars] were new and he went to the Powerbar rep and got me a box of Powerbars. I'd never had a Powerbar in my life and I ate five of them, and you can imagine ... five Powerbars and a hot dog ...

But it was a Grundig World Cup, the state of the art at the time ... it's hard to believe that that was the precursor to the World Cup experience. The early days was about putting your bike on a train in Europe and travelling to the World Cups with a duffle bag on your handlebars. It's fun to have those memories as well as seeing the sport grow and being a part of that. That was factor in me having such a long career; it was really exciting to be part of something that went from such grassroots to the Olympics. It was exciting to see the sport grow and change in such a short time. It was pretty cool.

Coming from the road sport, you grow up with the term 'Classics', and you have to say that Mont-Ste-Anne, was there from the very beginning, but it's not just the longevity, but also a lot had to do with Patrice [Drouin] and Chantal [Lachance] - founders of Gestev and organizers at MSA. Having some of the very best World Cup organizers from the beginning; they were constantly on the cutting edge, whether it was course design, whether it was amount effort put into the events - the promotion, the peripheral activities - like the non-PC Miss World Cup with the guys as the contestants! They always [Patrice and Chantal], with the atmosphere and the organization, and such a passion for the sport ... they just kept making it better and better, and setting the example for the world. It was a huge contribution to the sport, not just in Canada, but to the World Cup in general.