Former Canadian rider Geneviève Jeanson has written an open letter to the UCI condemning their actions in response to abuse in cycling; a number of cases of which have recently come to light, including one involving Canadian Maggie Coles-Lyster and the Doltcini-Van Eyck Sport team, as well as the suspension of Health Mate-Cyclelive team manager Patrick Van Gansen.

Jeanson, a former Junior world champion, World Cup winner and Olympian, was banned from the sport in the late 2000s for EPO use, for ten years, but has spoken of abuse and harassment by coach Andre Aubut, who was subsequently banned for life. 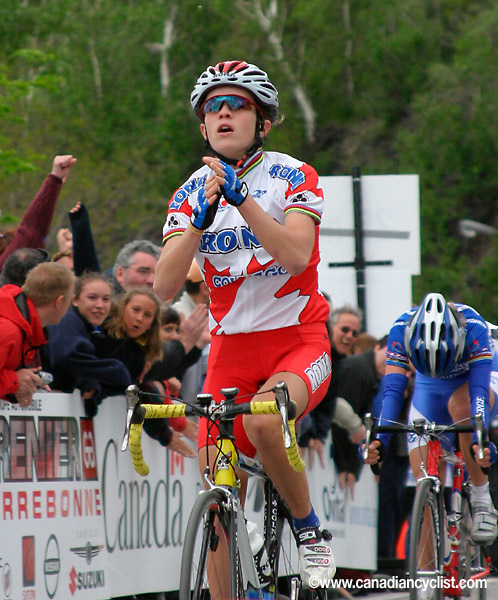 Jeanson has given us permission to reprint her letter here, stating, "Hopefully it is one more step towards change".

To the Attention of: The Union Cycliste Internationale

My name is Geneviève Jeanson, I'm a former Professional Cyclist and Olympian. As a survivor of extensive and lasting abuse (as a UCI licensed athlete) by my coach (who managed a UCI registered team) both as a teenager and an adult, I've followed the recent developments and subsequent ruling concerning Patrick Van Gansen (and others) with great interest and concern. I feel it's my duty to share my story with you for the health and safety of cycling's future generations. Please consider this letter as my formal complaint to you, as well as a suggested course of action to remedy the circumstances perpetuating abuse in the sport of cycling today.

As you may recall, I retired from professional cycling in 2006 following a failed EPO test. In my situation, the "omerta" surrounding the abuse I endured by my coach, and the ongoing EPO use were inextricably related. The abuse started when I was just 15 years old; "light" at first, and became more severe as the years went by. I was screamed at, insulted, manipulated, shamed, beaten, physically and psychologically abused. Why did I keep quiet? Because of the constant threat of him taking my life and his own if I were to go public; this was his weapon of choice. Because I was afraid. Because I was ashamed. Because I was told it was all my fault. Because he would tell everybody that I was using EPO. Because I did not want to have cycling taken away from me. Because I had no support, and worse, because I though I was the only one living this kind of abuse.

While it's my view that my experience was not unique (the secrecy of drug use and abuse intertwined), my greater concern is how the two matters are treated so very differently by the UCI. In the case of Van Gansen, what's especially disturbing is that the UCI Ethics Commission that investigated the complaints (finding the accused guilty of numerous claims) appeared to have functioned properly, only to be completely contradicted and abandoned by the UCI Disciplinary Commission assigned to actually punish the acts he was found guilty of!? A 22-month suspension for sexually harassing and berating numerous athletes (served retroactively no less) vs a 4-year suspension for a positive drug test (and a lifetime ban for a second offence)?

In other words, in the UCI's view, abuse is "not too bad", while PED's are "clearly unacceptable". The message that it sends offenders (for PED's or abuse) and victims alike is grossly disproportionate and completely unacceptable. At an absolute minimum, and without entering into a different debate altogether regarding the impact, realities, and consequences of PED use in sport, the two offences are at the very least "comparable" by any standard, but assaulting women and getting away with it is most certainly no less offensive, damaging, or unacceptable than drug use. In my opinion, sexual harassment is a greater offence than getting caught taking performance enhancing drugs, and a 22-month suspension and taking a sexual harassment sensitivity class is not sufficient and is not the solution. In society, sexual assault is a crime punishable with a prison sentence. Suspensions need to match the severity of the actions.

Also pertinent to this discussion are the statistics surrounding the rate of reoffending for sexual and aggressive abusers; in this light it's nothing short of irresponsible to see a DS return to work in the same context. What will happen if, in 5 years, one (or many!) women file formal complaints against Van Gansen? Will the UCI vouch for him with all the jurisprudence before them? Or will they shrug, apologize, and vow to investigate yet again, so it never happens again, like US politicians after every mass shooting? My coach never stopped the abuse, even after saying he was "so sorry" each time. It only got worse. In fact, he was arrested in Phoenix, Arizona, in 2016 for domestic violence against his wife. Athletes don't endure abuse because they are weak, we endure because we are scared of the consequences of speaking up.

The abuse that I endured by my coach damaged me. I never thought I would be good at anything else, or be able to function in a normal society. I sought professional help in 2008, and stayed in therapy until 2019. I can proudly say that I am now living a healthy and happy life, but not all young women cyclists have the same opportunities to heal that I had: most will suffer in silence for the rest of their lives.

A coach, director or team manager needs to be strict regarding training but anything over that does not belong in sport. Athletes at national and world levels are vulnerable and need frequent reassurance. We trust a coach because they are the ones closest to us, they are a provider, a guide, a protector, a friend, and a parent-figure; these roles come with great responsibility, and require introspection. Sadly, with this absolute trust and bond comes the power to build or to destroy an athlete.

By the very nature of how an athlete enters into (and survives within) the world of professional sport, the risks of speaking out against misconduct are heavily compounded. You can't just wake up one morning and say "my manager is not treating me well - I don't want to work in this environment anymore" and simply change jobs. This is a major consideration when addressing this topic - it was at the forefront of my fears - especially since my abuser used it against me constantly (a regular phrase from him was that I'd be destitute in the outside world - that the only way I'd ever make a living was riding a bike professionally under his management).

Cycling needs an independent agency (like WADA) taking responsibility on all cases related to abuse. A place where riders can file formal complaints in total confidence, where victims can get help on the legal technicalities, can stay in the know of the developments of the case, get psychological help during and after the abuse, but mostly feel safe that they won't be punished for speaking. Governing bodies don't exactly know where hard (positive) training ends, and where abuse starts. Gathering the courage to file a complaint is extremely difficult. The cost of speaking up must be better balanced and contemplated - early and discrete warning is always good for all parties when you think about it. Filing a formal complaint of abuse such as physical assault or sexual abuse, should result in an immediate provisional suspension during the investigation. We cannot wait for serious abuse to happen– it should be easy to privately and discretely sound the alarm on inappropriate behaviour for the UCI to investigate. If there's time to measure sock length and dictate how riders may ride their bikes, there's time to investigate an email saying that a coach is overly temperamental or giving unwanted and inappropriate attention to his athletes, and let him or her know that someone is watching and investigating.

We need to create an environment where women riders want to continue in the sport after retirement, where they feel supported and listened to. Cycling has been a male dominated sport since its beginning, and there's nothing wrong with that. But it's time to change things: women take more place every year on the racing calendar, are getting better at tactics, are getting stronger physically with better training, attract more fans, and inspire other young women to aim at world level cycling. Women who feel successful in high-level sport will be more likely to continue to mentor, coach, and manage other women. Cycling needs to become a sport where women can grow and improve as much as men.

It took me 7 years to touch a bike after I was suspended and I retired. I will never know what would have become of my life if I would have had an enriching and healthy career. I'm still bitter about that. Can you believe that it took a failed EPO test and a 10 year suspension to save my life? That suspension allowed me to escape from the imprisonment of my abuser.

Let's not have that happen to other riders.