The first full season of the Mountain Bike World Cup since 2019 began on Friday evening in Albstadt, Germany, with the women's and men's Short Track. Two of the dominant riders of this discipline became the first this season to wear the World Cup leader's jersey, with world champion Pauline Ferrand Prevot (Absolute-Absalon-BMC) winning the women's race and Mathieu van der Poel (Alpecin-Fenix) the men's.

The roughly 20 minute Short Track offers half the points of a cross-country (XCO) win, and the top 16 finishers occupy the first two rows on the start line for Sunday's XCO, so for the top 40 ranked riders who are allowed to enter, it is a serious battle.

Australian champion Rebecca McConnell (Primaflora Mondraker XSauce) led the start of the six lap women's race, but Ferrand Prevot was always lurking in the top three, along with 2019 World Cup champion Kate Courtney (Scott-SRAM).  Linda Indergand (Liv Factory) made an unexpected mid-race attack and opened an almost 20 second gap as the contenders hesitated, and still had a 13 second gap going into the final lap. However, Ferrand Prevot attacked out of the chase group hard on the first climb and caught her in the final kilometre. Indergand held on for second, just ahead of Annie Last (Great Britain) and Courtney. 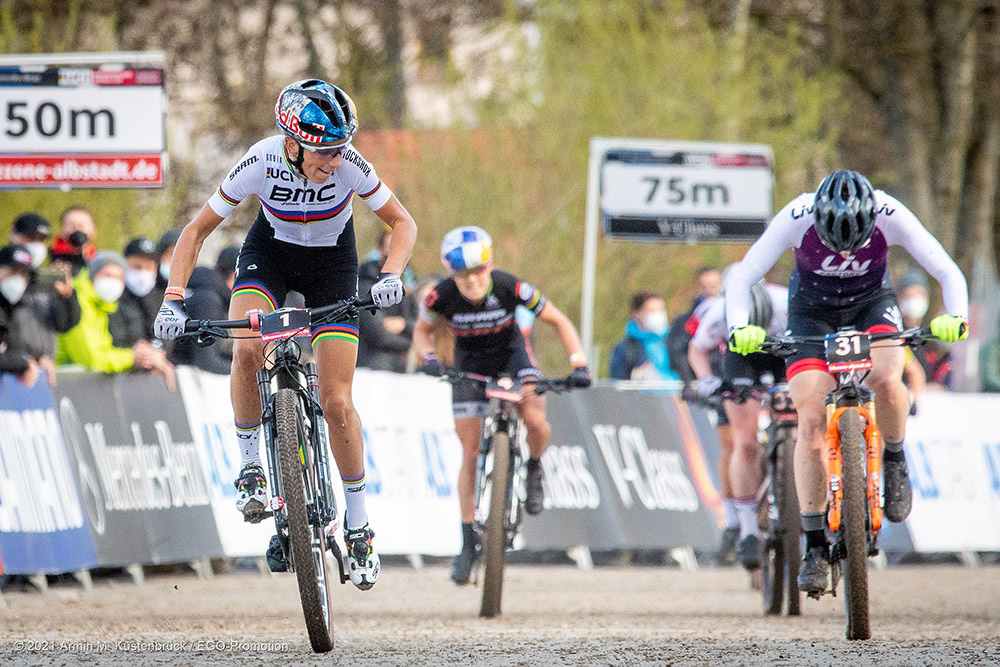 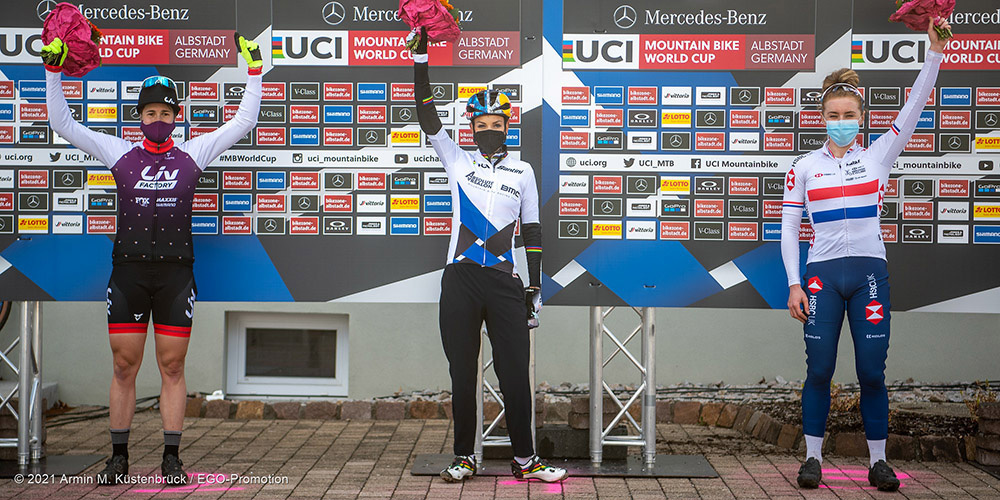 "I didn't really expect to do that well," said Ferrand Prevot, "but I just tried to stay out of the wind at the beginning of the race. I didn't want to ride [at the front] because of the headwind on the long straight section, so I waited until the end. I wanted to go [with Indergand], but I said to myself, 'if you go you will kill yourself', so I waited and let others to the job [of chasing]. I attacked at the last lap and didn't hold back. It was a good tactic."

Canada had three women in the race, with Haley Smith (Norco Factory) and Catharine Pendrel (Clif Pro) joining Batty on the start line. Batty rode as high as 15th before fading a couple of spots at the end. Smith moved up into the low-20s mid race, but couldn't hold the spot, dropping to 31st at the finish. Pendrel, in her first race since giving birth in late January rode in the 30s all race to finish 35th. 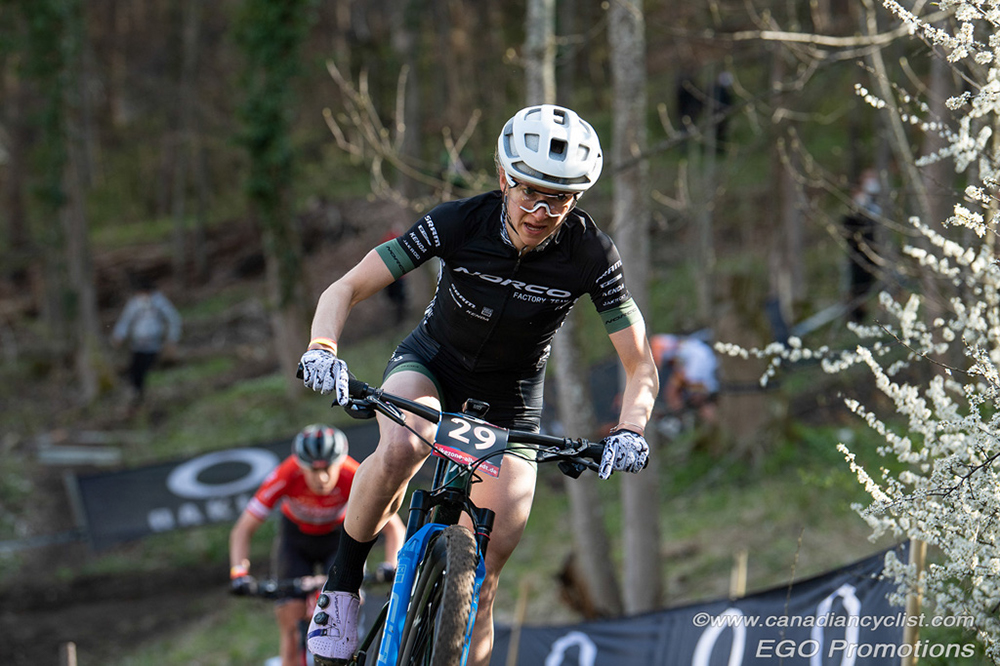 Smith commented after, "I can tell that the fitness and desire are there, which is a huge relief after going so long without feeling like myself in racing. The sharpness and race rhythm are missing, which meant I rode most of today's race alone. But that'll get better every week, and I'm really excited to improve as I build towards the season's big goals later on!

"Lots of little things to take away from today and improve on for Sunday's XCO, which in a sense is nice. Having small, practical mistakes to rectify is much easier than knowing you've messed up your physical prep and need to reinvent the wheel, so today gives me a lot of optimism heading forward." 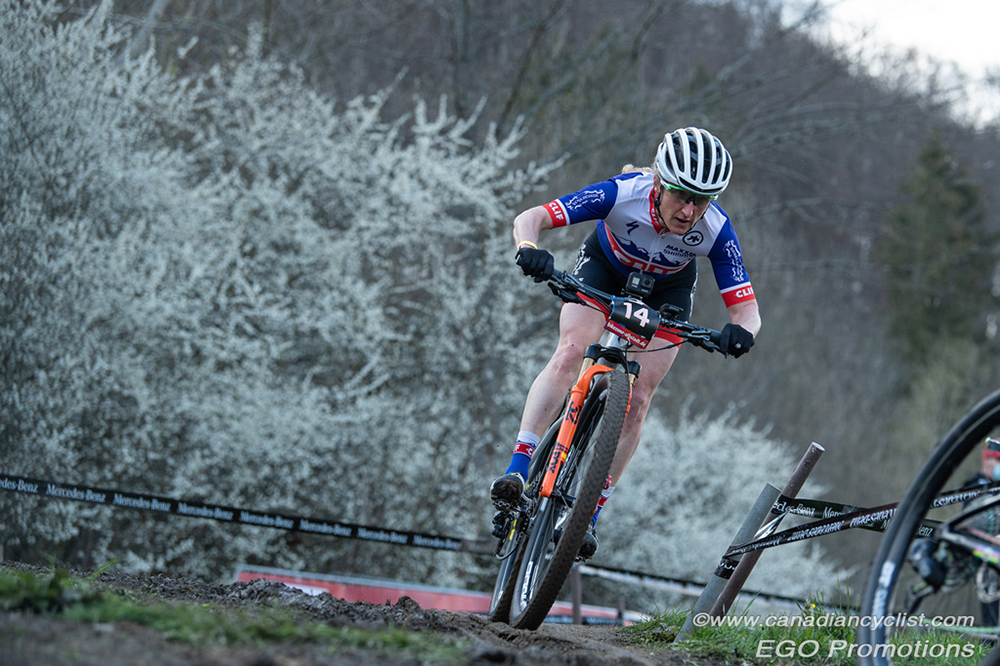 Catharine Pendrel, racing for the first time in 20 months, said "It was hard, but so great to be back at it. Based on training, I had hoped for a little more, but with only two days on the ground in Europe and a season out of racing I'll take it as a good stepping stone and search for more on Sunday and the rest of this season."

The men's race saw van der Poel returning to mountain biking for his first race since August of 2019. In the 2019, the Dutch rider was five-for-five in Short Track and, while he has shown his continued speed and power on the road and in cyclo-cross, the question was:  how would he fare against the top mountain bikers? He answered quickly on the second lap of a seven lap race, attacking explosively and shredding the field. Nino Schurter (Scott-SRAM), the world number one ranked rider, struggled to latch onto his wheel, and the bunch came back together once van der Poel eased back on the pedals. For the rest of the race until the final lap van der Poel sat a few riders back from the lead, recovering, while Schurter, Victor Koretzky (KMC-Orbea) and Henrique Avancini (Cannondale Factory) took turns setting a high tempo. But on the final lap the Dutch rider attacked again and no one could respond. Koretzky beat Schurter at the line for second. 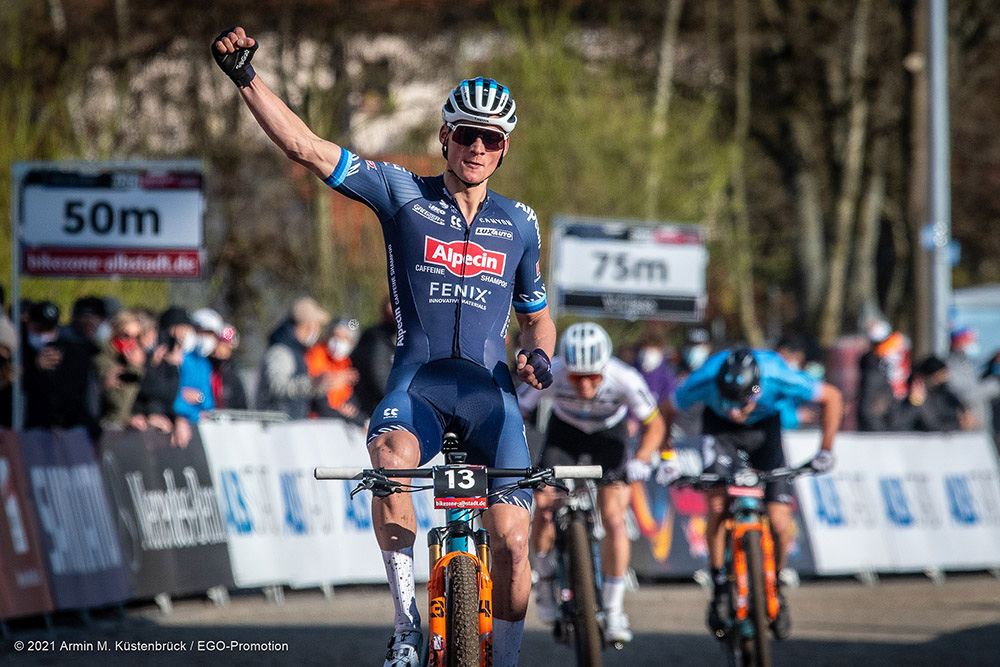 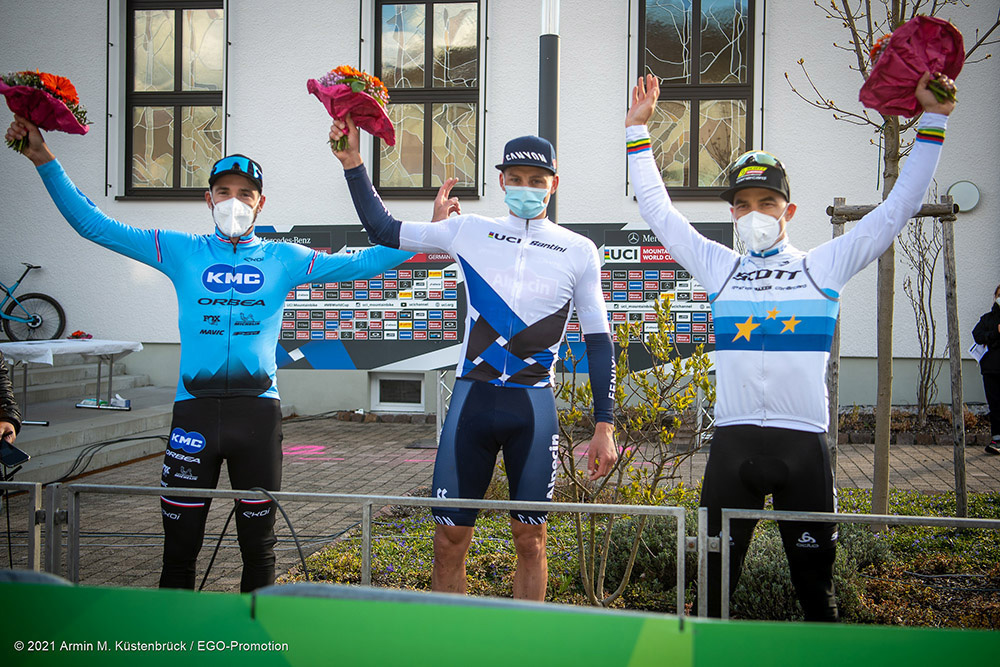 van der Poel admitted, "It was different racing on mountain bikes with the wide handlebars ... there's was a lot of touching. But at the end I managed to pull out a win."

Talking about his early attack, he explained, "I wanted to reduce the group a bit, because of the headwind it was tactical and I tried to get away with a little group, but there was nobody pushing on with me. So I tried to recover a bit for the last lap. I wanted a good starting position [for the XCO] and as many points as possible to go for the Olympics, so I'm happy I get to start with the leader's jersey."

In the men's race there were two Canadians on the start line, with Leandre Bouchard (Pivot-OTE) starting in the third row. Bouchard had a strong start, moving into the top-15 and as high as 12th. However, in the last couple of laps he began to fade just as Peter Disera was moving up. Disera was up to tenth by the start of the final lap and continue to improve through the final lap for seventh, while Bouchard was 24th. 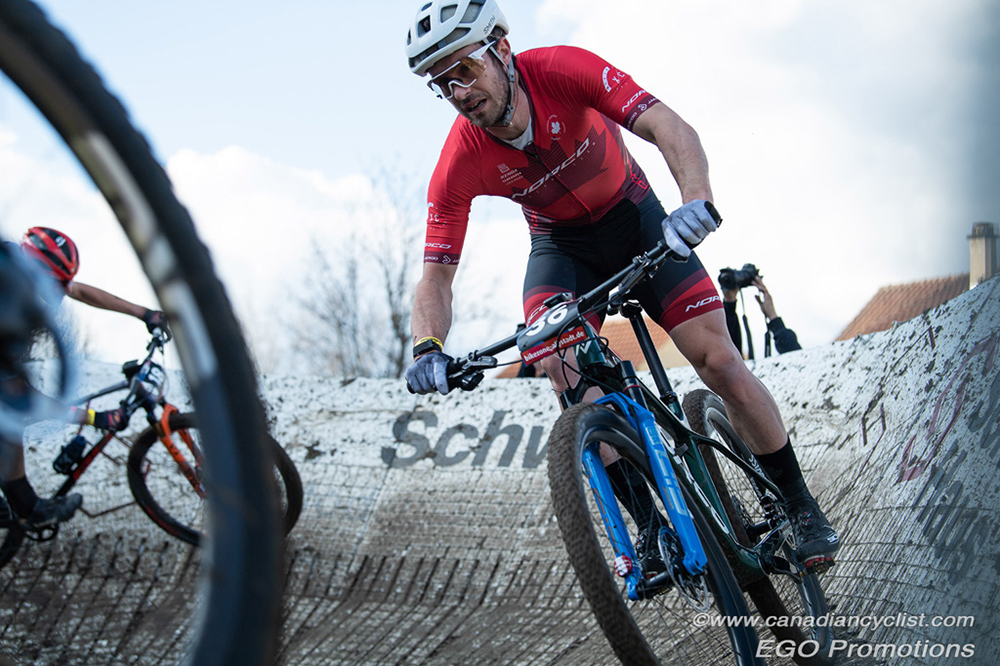 Pete Disera admitted, "[I'm] Fired up on that performance. [The] Body was good and legs were there but [I] tried to stay smooth and conservative. Took opportunities as they presented themselves and I constantly found myself in a surfing position, where I could assess the group and make a move for a spot or two. It was a clean and smooth race. I threw a little spice in on the last lap to take a stab at front row and it paid off. Excited for Sunday!" 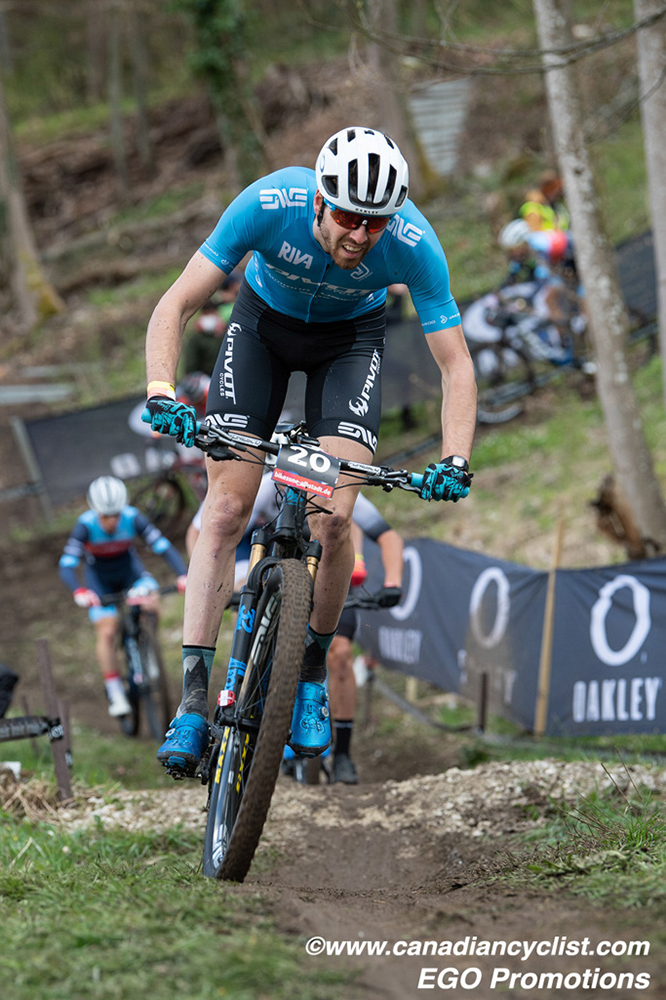 "The today was the first Short Track for the season, so I was pretty excited to race it," said Leandre Bouchard. "I got a good start, but it was a pretty hard race and I was yo-yoing for positions. I paid the price at the end, when I was barely capable of closing on the front group. It was a brutal race, but I still scored a third row start for Sunday, so I'm quite happy with it and proud of the way I fought."