Loana Lecomte (Massi) took her second straight World Cup win on Sunday in Round 2 of the women's cross-country (XCO) in Nove Mesto, Czech Republic. American Haley Batten (Trinity Racing) followed up her Friday short track win with a second place, after a last lap surge allowed her to overtake Rebecca McConnell (Primaflor Mondraker XSauce). Lecomte's win puts her firmly in control of the leader's jersey, 145 points in front of Batten. 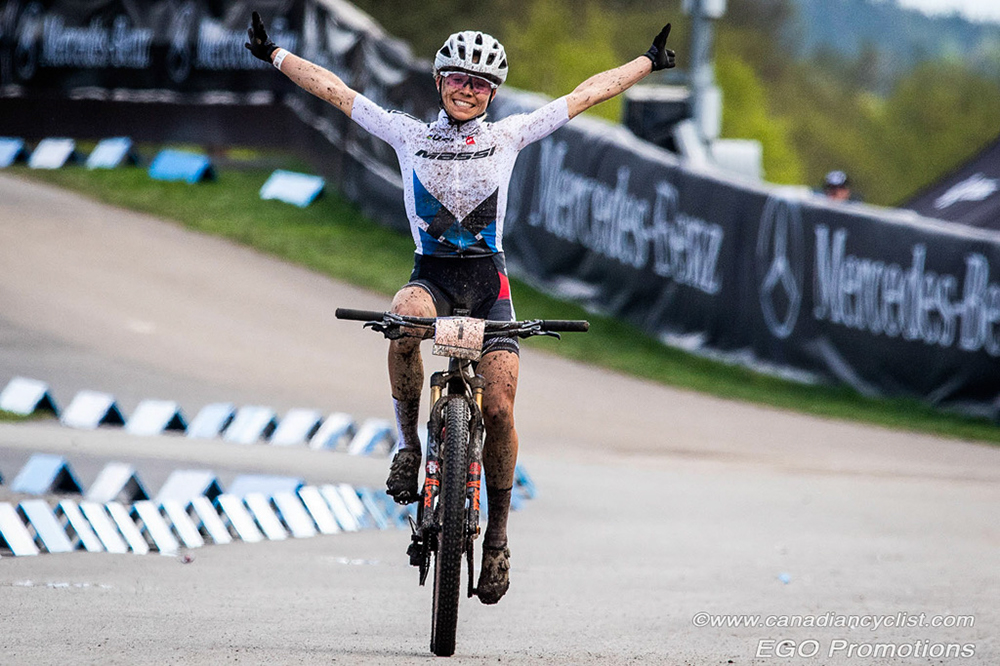 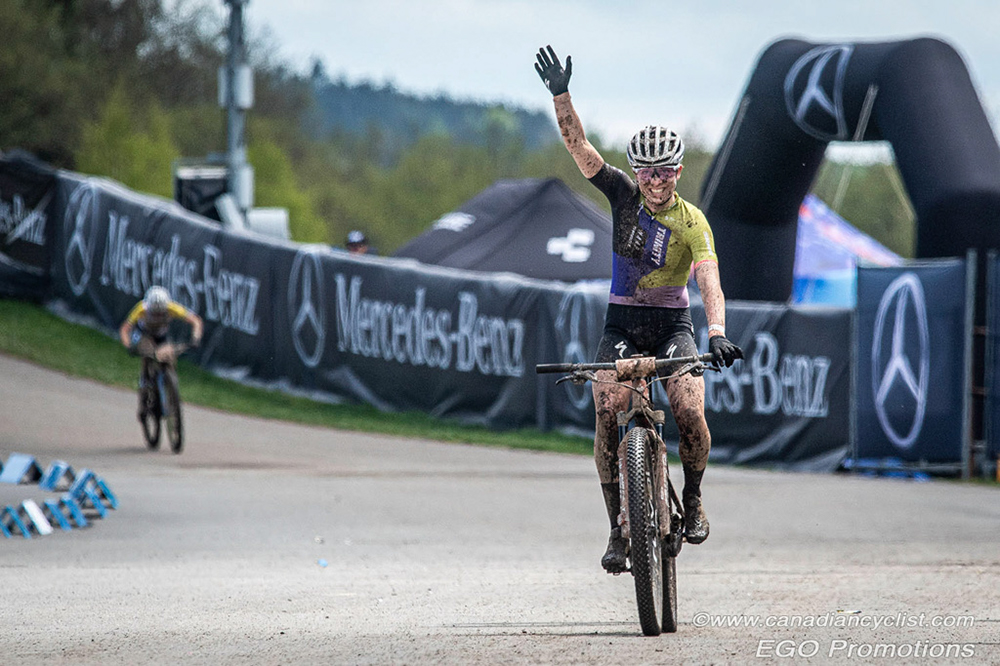 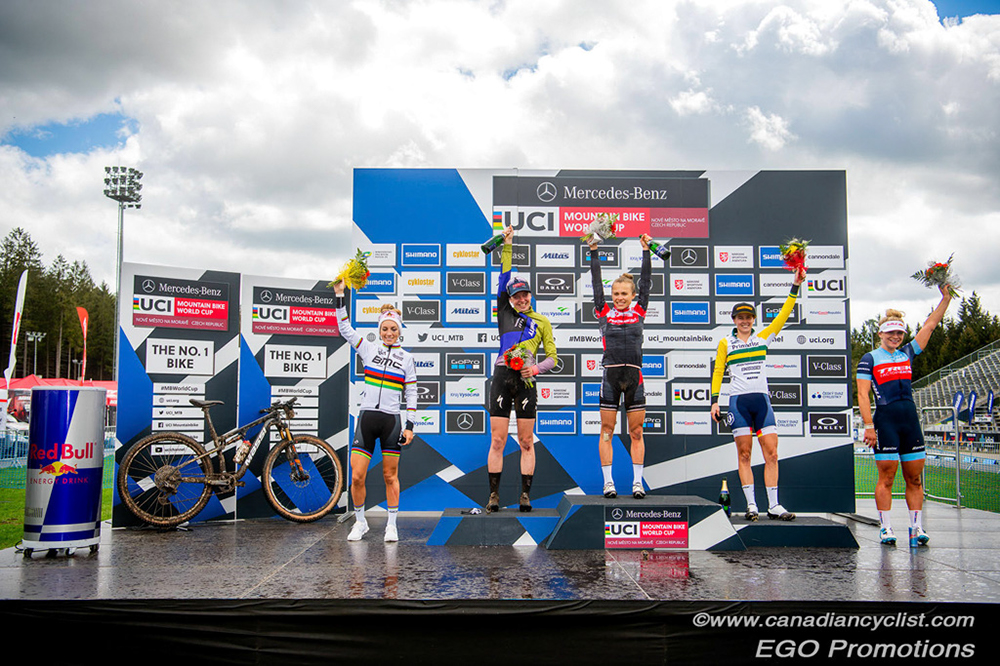 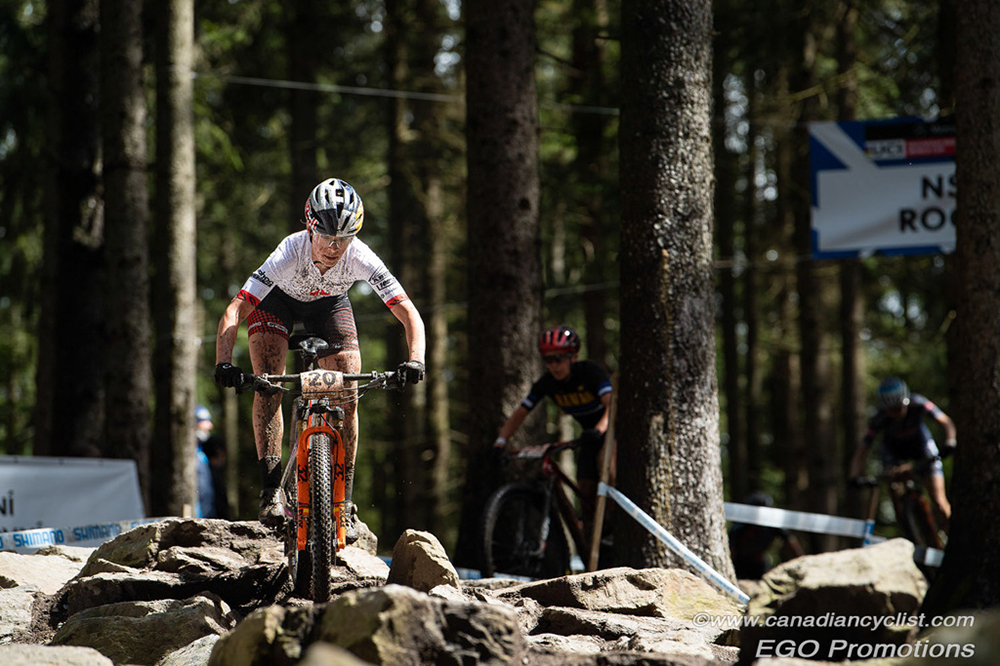 Canadian national champion Emily Batty (Canyon Collective Factory) was the top Canadian, in 17th place. Batty, who started in the second row, rode as high as 12th before fading slightly in the final two laps. Catharine Pendrel (Clif Pro) rode a consistent race, moving into the top-20 mid-race before dropping back on Lap 4 to the mid-20s. A last lap surge put her within a few seconds of the top-20 again, before she faded slightly to finish 23rd. Jenn Jackson (Canada/Norco Factory) was 26th, while Haley Smith (Norco Factory) had a much more consistent race then last week to finish 42nd. Laurie Arseneault (Canyon Collective Factory) was 53rd, Sandra Walter (Canada) was 58th. Cindy Montambault was 76th.

Rain through the week made the normally dry Nove Mesto course muddy and slippery, with riders having to run many uphill rooty sections that are usually rideable. The women did a start loop plus five laps. 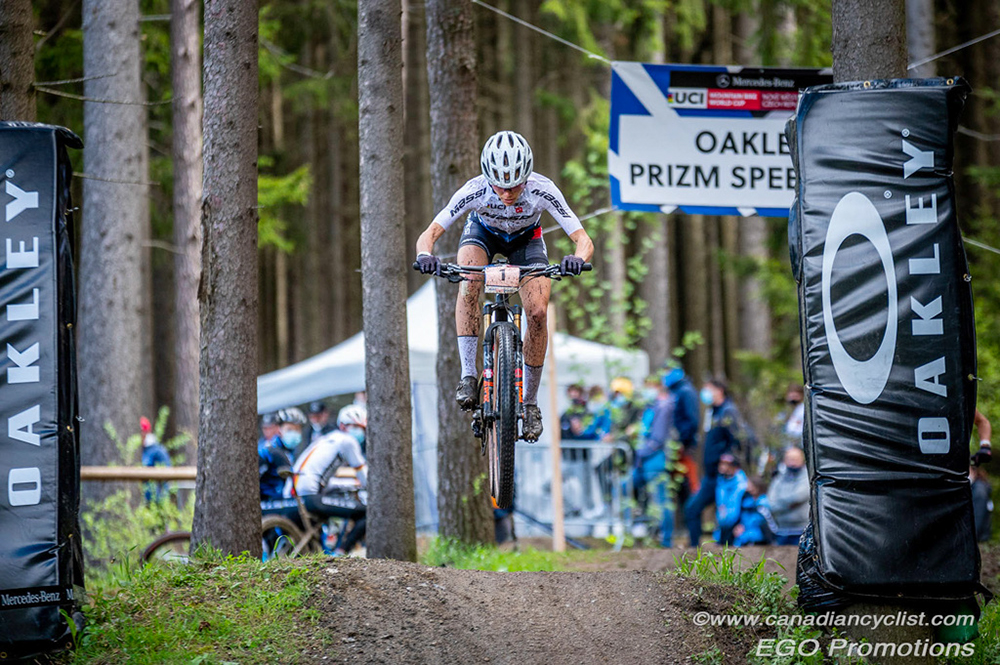 Under-23 world champion Lecomte took the lead on the first climb of the start loop and never relinquished it. Remarkably, the young French rider has led every lap of both World Cups so far this season, attesting to her dominance. By the end of the start loop she had a four second lead, which she extended through the rest of the race. She had the fastest lap splits for every lap but the final one. 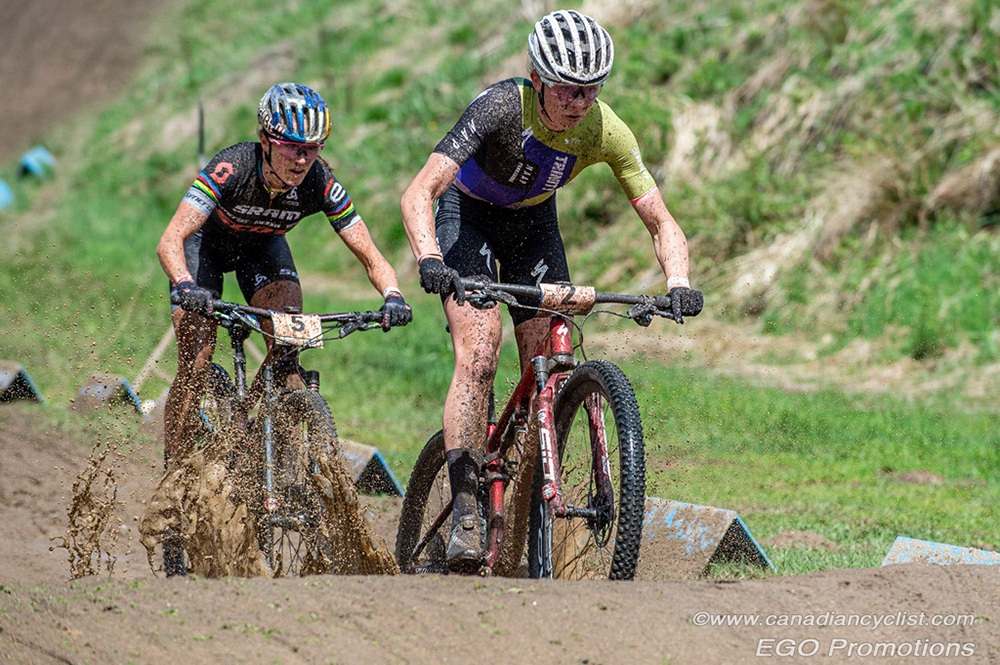 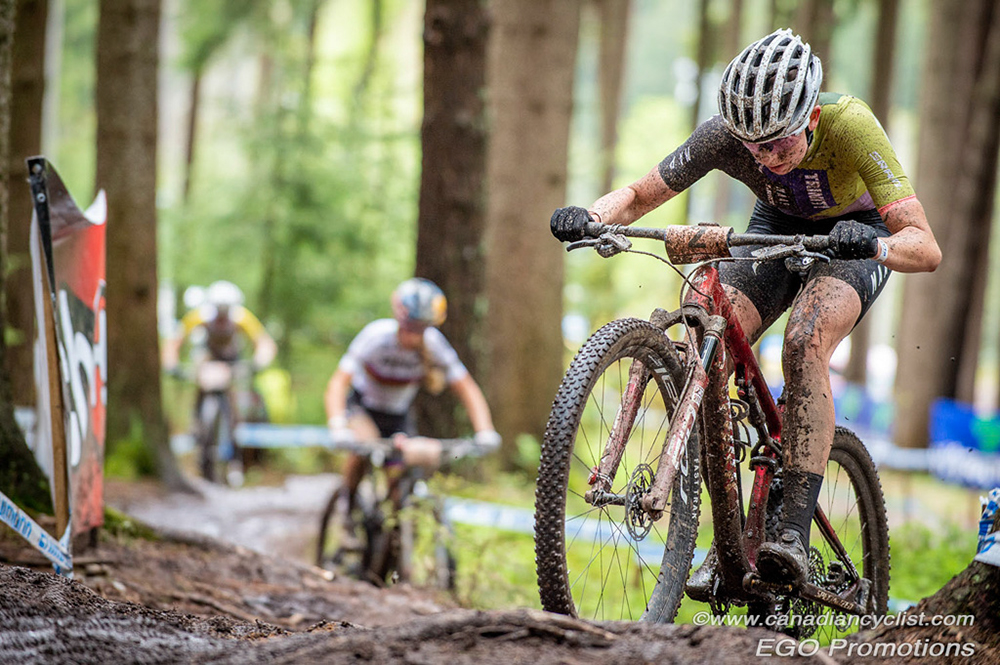 The real race was behind her for the rest of the podium spots, with the added urgency that this was the final Olympic qualifying event and many riders were looking to lock down their spots with their national federations.

Americans Kate Courtney (Scott-SRAM) and Batten led the early chase, with world champion Pauline Ferrand Prevot (Absolute-Absalon-BMC) bridging up to join them after the start loop. Ferrand Prevot had crashed out of the short track and therefore had to start back in the fourth row.

On the second lap, Courtney crashed hard, breaking her rear brake lever. She limped into the tech zone and had it replaced, but was in the 60s by the time she got going and, just as she was starting to pull back spots, flatted. She would keeping chasing and eventually recovered to 41st. Current Olympic champion Jenny Rissveds (Sweden) also suffered mechanical problems and had to drop out.

In the chase, McConnell and Evie Richards (Trek Factory XC) moved up to join Batten and Ferrand Prevot, with McConnell moving alone into second on the third lap, as everyone slogged along at their own pace on the muddy climbs. Batten held down third, with Ferrand Prevot in fourth, just ahead of Richards.

The status held until the final lap, when Batten powered by a tiring McConnell on the last big climb to take over second. McConnell managed to hold off Ferrand Prevot for third.

"I won my first World Cup here last year," said Lecomte, "so I wanted to be on the podium again here. I didn't expect to win here and it is a bit unbelievable; I have the leader's jersey and I'm just happy to enjoy this. I feel in very good shape at this moment because these two World Cups are the qualification for the Olympic Games, so my coach [Maxime Marotte] did a good job of preparing me."

Batten, an Under-23 rider racing up in the elite level, now has a second and a third, plus a short track victory, in two weeks of racing. While fellow American Courtney has locked up an Olympic spot, this race was important for Batten to get a spot for herself. "This definitely lands me in the criteria, so I'm pretty happy about that. I go to school in Squamish [B.C.], so the conditions reminded me of that, today. There were some super slick roots and I actually felt strong on them, and was able to pace myself well and avoid mistakes. It was a blur out there, and I just stayed within myself and rode the pace that I knew I needed to ride. I put it all in on the last lap and am glad that I could land second spot."