Lori-Ann Muenzer remains Canada's only Olympic gold medalist in cycling, winning the women's sprint in Athens at the 2004 Games, at the age of 38. She also represented Canada at the 2000 Sydney Games, finishing 13th in the 500 metre time trial. In addition Lori-Ann won two silver and two bronze medals at the world championships.

It is now 17 years since Lori-Ann won that medal. "Yes, time has flown by for sure. But it also seems like yesterday, too. To be honest, I have never seen any of the races [in Athens] except for the final one, so I can only go through it in my mind; the heats and qualifying. The big race was the semi-final with Anna Meares of Australia. And the reason I say that is because I think we were more equally matched physically and mentally." 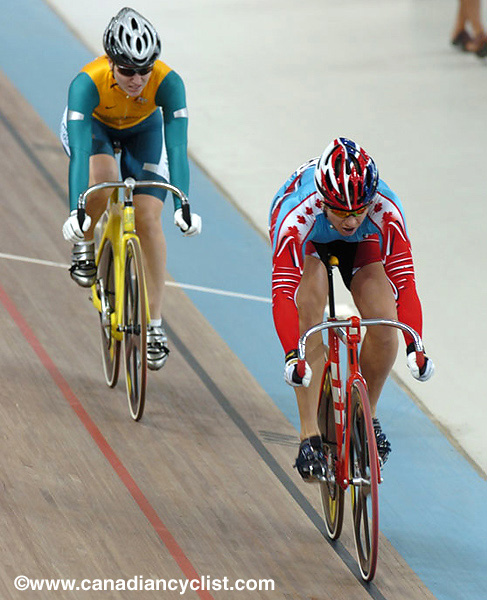 "I lost the first race, so it was do or die, literally [in the second race]. I had no choice but to win the next two heats if I was going to go into the gold medal round. I had to do something different from what I had already done because, I tell ya, I wasn't on my game in that first heat at all; I got totally clobbered. Sometimes, when you pinch yourself you can get yourself out of a mind state and into a whole different one. And that's what I did."

"Going into the [gold medal] final with Tamilla [Abassova, Russia], there was no contest, there was no contest ... I was bigger, more powerful, stronger, faster. When we were sitting on deck in the chairs - typically they would strap the legs of the chairs together because the coaches would steal the chairs to have something to sit on. But the chairs weren't strapped together, so I moved my chair ahead of Tamilla's and that set the stage; I was already ahead of her before we got on the bikes." 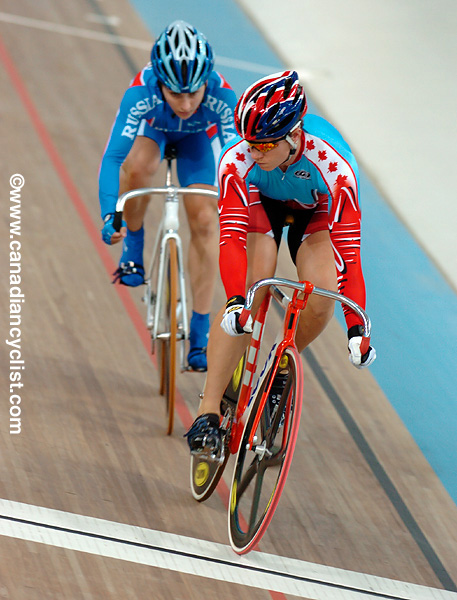 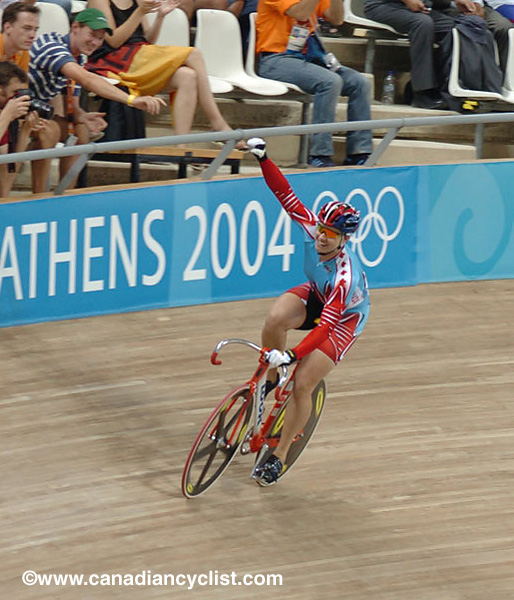 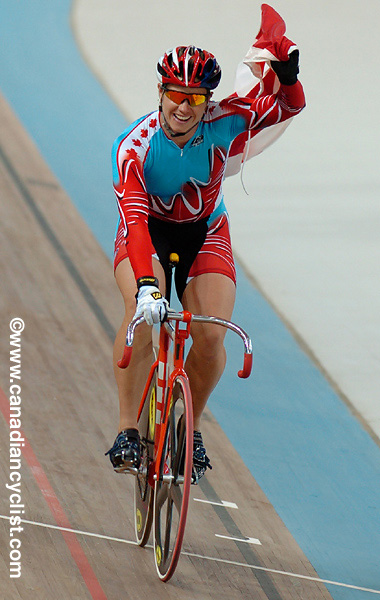 A celebratory lap with Canadian flag 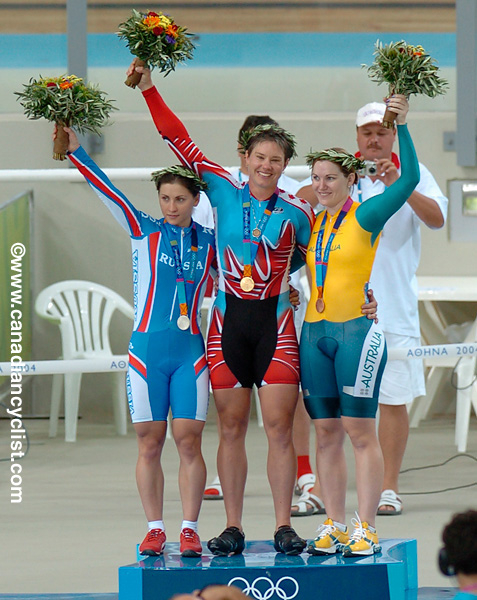 I pointed out that the track facility was not full enclosed, so outside air currents could have a possible impact.

"I forgot about that! It's so true. It was open, but they put fabric blinds on the one side, and that was behind where the journalists were; where Mark Connolly and Curt Harnett were sitting [CBC commentators]. So it kind of sheltered [the track] but it was still open on the other side. It felt like an indoor track, but every now and then you could feel the breeze coming through."

"We had discussed using solid disc wheels [front and back] and I just said 'nope', because I didn't feel it. So I threw on my five spoke front wheel and I wasn't thinking about my wheel [during the race] - with a solid wheel, you would have felt it flipping you back and forth and I didn't want that because it was throwing me off my game. That's funny, I had forgotten about that! They're [the tracks] all indoor now because Mother Nature will really screw up the schedule."

I also pointed out that she is still Canada's only Olympic gold medallist in cycling. We've had lots of silvers and bronzes, but she is the only one to put it all together and take the top spot - I asked her if it surprised her that no one else has done it.

"I'm going to say yes and no, and the reason for that is two-fold:  there's belief and then there's support. Those two will really screw with your head if it is not screwed on properly. Belief, I believe, is the number one factor that will determine what you do. Yes, luck will play into it, but preparation is huge and you literally have to prepare not is IF you are going to win, but as if you have already won. And if you don't do that, then you leave it up to chance, you leave it up to outside forces."

I asked Lori-Ann her thoughts on the national track program, which has changed dramatically from her time, when there was no domestic track like Milton or a real full time 'program' across both sprint and endurance, men and women.

"Absolutely. I would have dreamed about having a program, having a facility, a team, a real group together. So, Steen [Madsen, her coach] did what we did here [in Edmonton and Calgary] to the best of our ability. Have I been following the program? No I haven't. The last time I have been out [to the national cycling centre] was, what, 2015 when I was inducted [into the Canadian Cycling Hall of Fame]. To be able to see it in action was incredible, really incredible." 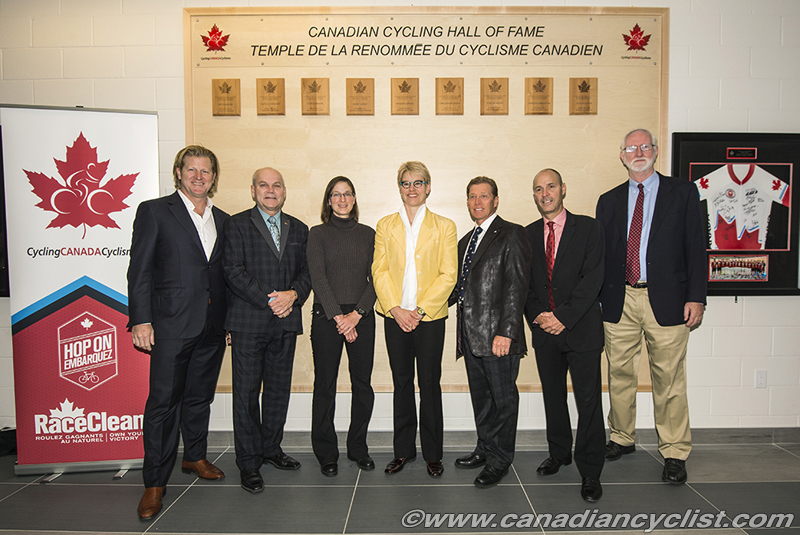 "But also, when you are in the middle of it, having outside things, like schooling, work, being involved in the community ... I know with COVID right now it's not possible right now, but there are different things you can do. One thing that I had different was that I also worked full time. You knew that, the CCA knew that."

I said to Lori-Ann that when speaking with Olympians like Alison Sydor, Steve Bauer or Catharine Pendrel - who all have had professional careers - they have a different perspective on the Olympics then a track athlete like you or Curt Harnett, where there isn't a professional component. So, I asked - world championships versus Olympics, how does it compare, from your perspective?

"Well, if you are talking about a non-Olympic year, it [world championships] is the first of the four - world championships, Commonwealths, Pan Ams and Olympics. But in track it is different because you don't have the professional designations, so I would rank the Olympics as being the ultimate."

"It's interesting when you start to dive into it. We [the cycling disciplines] are all under the umbrella of cycling, but each discipline is different and unique in its own way. The pro disciplines and teams are more endurance-based, and track is a little different."

Given the current discussion about athlete mental health, it was a bit prescient that Lori-Ann and I talked about that - the stress and pressures on an athlete going into and at the Olympics, as well as post-Olympics.

"I understand now what I did because of the program that I teach now [as a consultant], that is called <a href=https://www.lori-annmuenzer.com/thinking-into-results-by-lori-ann/ target=_blank>Thinking Into Results</a>."

"When I was competing at the Olympics, I went and did it because it felt right, I knew it was the right thing to do. When I was there, having the experience of 2000 in Sydney, I had an idea of what to expect, so I went and prepared on that. That was huge, because the Olympics is an overwhelming experience. It's massive - you have certain training times, you go here for food, you go there for transportation, you go here for laundry, you live in a village, in a condo. There was Canada House where you went to see what was going on, what other athletes and sports are going on ..."

"There were so many distractions but we prepared for that - one, because of my Sydney experience and two, because I had a vision, I had a clear picture in my mind of what I wanted to do. I also figured out, 'if stuff is going to go sideways, what am I going to do about it?'."

"Good lord, I had so many things go sideways, but it didn't matter, because I knew that I could handle it, because I had already seen it in my mind - if it was going to happen or if it was going to go wrong or go well, what it was going to look like. To have the time to think about that and prepare, that was essential ... I think the word 'patient' was my biggest word! Steen said to me, 'take your camera and photograph stuff, but also stop and look around', because I had always been in a hurry, it was always 'what's next?'."

"So, it was about 'stop and enjoy where you are, this may be your last Olympics'. Who knows what the outcome is, enjoy it. Both my wheels blew up, one on my bike before I set up for the semi-finals and when I came into the pit the front one had exploded. I thought, 'maybe it was a good thing that both of them weren't on my bike at the same time'."

"Going into [the Olympics], there's a lot of pressure on you to perform and win. And you can't think about that, you have to break it down. In the heats, you can't do the third one without doing the first one ... you've just got to be in a bubble."

We finished off by talking about what Lori-Ann is doing now, 17 years after her ride to gold.

"About two years ago I found a program that resonated with me, and as soon as I saw it, I went, 'holy cow, that's my Olympic experience'. It's called Thinking Into Results. I'm a consultant with the Proctor Gallagher Institute; my two mentors are Bob Proctor from Toronto and Sandy Gallagher. It's not just a program, it's a system, a process. If you want to know how to win an Olympic gold medal and apply it to your professional or personal life, this is what I teach. I teach people to get crystal clear on their goal, their vision."

"For me to say, 'I want to win an Olympic gold medal', was an outrageous idea. It was a dream I had, it was a goal I had, and I had no idea about how I was going to do it, other than that I had ten months to figure it out and execute it. That's what my training time was all about, the preparation."

"Then it was a matter of putting it into action, doing the things I needed to do. I worked full time, so I knew what my time Monday to Friday, 8 to 4, was. So we prepared around that, before, after and on the weekends. The one thing I would do different is I would look and plan what happens after I crossed the finish line ... I probably would be at a different place in my life had I known that, but I didn't at the time."

Lori-Ann finished our chat by talking about one of Canada's new medal hopefuls from her own discipline, Kelsey Mitchell, who is also from Alberta.

"Kelsey came to my spin class just before she went to the RBC Training Program. She said, 'Hey, I'm Kelsey Mitchell, and I'm going to go to the Olympics!'. She said she'd been scoped out by RBC and was going to their training camp, and that she was a soccer athlete, and that 'I'm just going to go and do it'."

"The Olympics was one of the most amazing experiences of my life, and just to be able to share that with people, with athletes, is huge."