Alison Sydor is not only one of Canada's greatest mountain bike cyclists, she is one of the greatest in the history of cross-country cycling. Four world titles (one in Team Relay), 17 World Cup wins and the silver medal at the first ever mountain bike race in the Olympic Games, in 1996, in Atlanta. Alison attended four Olympic Games - 1992 (Road Race, 12th), 1996 (XCO, Silver), 2000 (XCO, 5th) and 2004 (XCO, 4th). 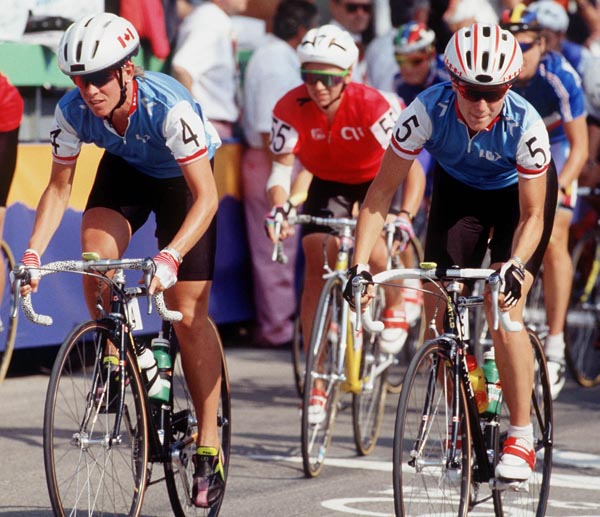 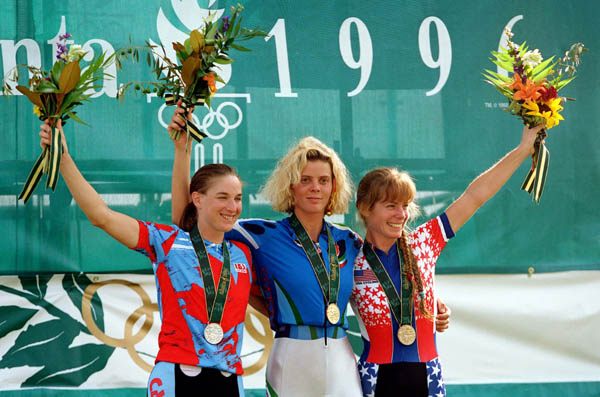 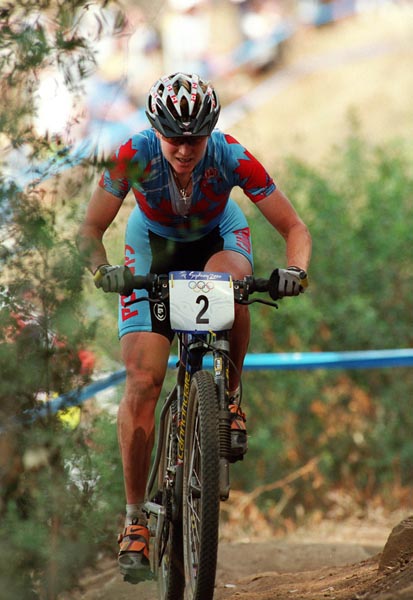 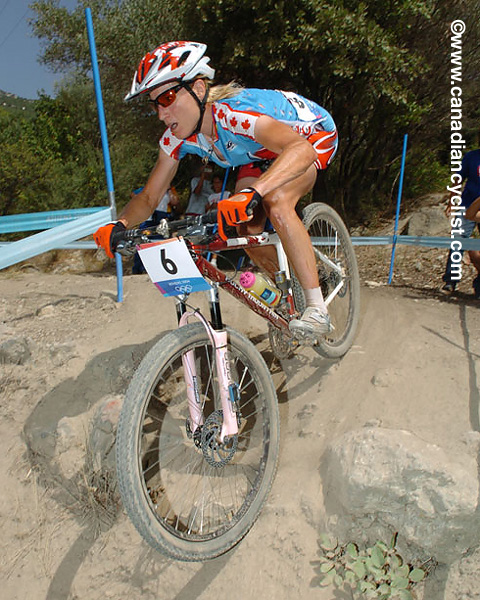 We began by talking about winning a world title compared to winning an Olympic medal. I pointed out that Steve Bauer rated the world championships as ranking higher in the cycling world, while others said it was an Olympic medal.

"I'm 100% with Steve on this. At the Olympics you have a truncated field and at the Worlds you had a big field. Now, [the Olympic] courses are photogenic and get lots of spectators but ... comparing the Worlds in Germany in '95 [Kirchzarten, Germany, where Alison won her second world title] to the Olympic course in Georgia, and there was nowhere near the atmosphere, the excitement. You are at the venue [at Worlds] with your professional team, with all the athletes, over a hundred on the start line." 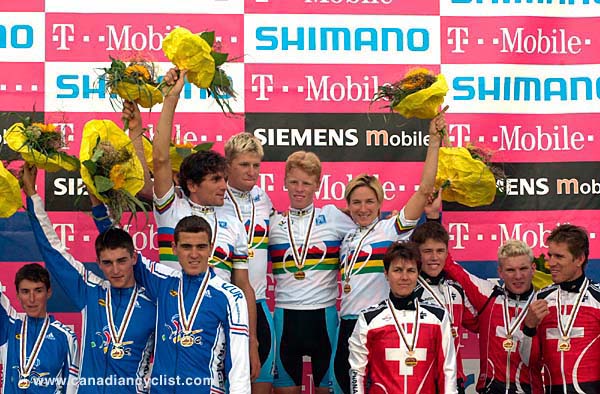 "But, on the other side, I certainly know from going to the Olympics in 1992 after medaling at the Worlds the year before that [bronze in the road race], the amount of media and interviews and everything ... I'd never seen any interest in road cycling, for a female road cyclist in Canada like I did in the whole pre-Olympic hype. And then having that again [in 1996], with mountain biking being a new sport, being a favourite for the race, it being in North America ... the amount of attention that race got, even though a World Cup felt like a more complete event, there is no race that I had been in that reached so many people by TV. I know with all the pre-Olympic hype and TV interviews and stuff, it was just the greatest promotion for the sport."

"After the Olympics ... I had never, ever been recognized locally as an athlete, and then all of a sudden there was an Olympic medal, and people were recognizing you in the grocery store. That's where the whole Sprockids and Lesley [Tomlinson, 13th in Atlanta] and I starting the Kids on the Shore [both programs to get kids onto mountain bikes] came from; kids watching the Olympics on TV and getting excited about it. I may have been known in Europe [among cycling fans], but the Olympics was a big, big promotion for the sport in Canada. I definitely saw the power of that after the fact." 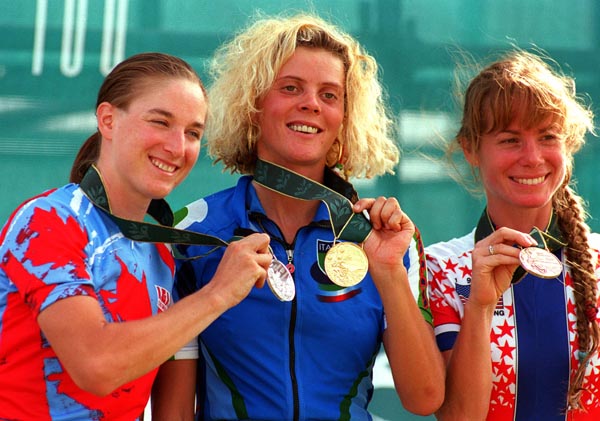 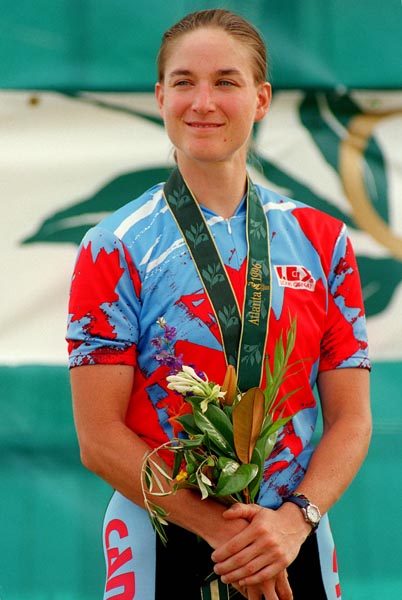 "It's a double edged sword, though ... it's great to promote the sport but it takes a lot of time and energy before the race even happens. So I did see the positive impact, as far as people learning about the sport. And I have to say it was the same for me - growing up in Calgary, I was into cycling, but as touring and riding around, I never knew anything about bike racing. The first time I ever saw cycling on TV was watching the Olympic road race with Bauer sprinting for a medal [1984], and that stuck with me. That image is burned into my mind, and I had it in the back of my mind for many years, buying cycling magazines and eventually starting racing myself. So I know the effect watching an Olympic race had on me, and I saw that it had the same effect in my local community with young kids who saw mountain biking and Olympic medalists in this new sport that was kind of cool and that they were kind of interested in."

"For myself, I'm quite introverted and shy, and being known in my circle was what I enjoyed. I never thought of it before, during or after the Olympics, so I was a bit uncomfortable with that [exposure]. So to me personally, that is a bit of a negative [the exposure]. I enjoyed the aspect where I saw that young people got turned on watching [the Olympics] ... one of the great things about the Olympics is that only a limited number of sports exist in your world as a kid, and then you watch the Olympics and it turns people on to all different types of sports that sometimes they didn't even know existed."

"I love that aspect of the Olympics, but ... I know you are supposed to treat it as just another race, but I always found it difficult to treat it as just another race. I would say that, as an athlete, I never gave my best performances at the Olympics, as I did at the Worlds. So that obviously colours my perspective; for every single Olympic race I have frustration with things that didn't go right."

"As an athlete, you can only just do your best on that day, and to feel that you weren't your best on that day is always going to be disappointing. To feel that I never really had [her best ride] ... maybe it was the time of the year, because I never had as good results in the summer as I did in the cooler months. I was never able to keep it in perspective, like I could keep the Worlds in perspective, so maybe it was a bit of a failing. The difference between the Worlds and the Olympics was a totally different environment that I never really got a handle on."

"The last Olympics I did in Athens, the whole issue with limited accreditation, who can get in there to help ... the first lap the feeders weren't where they were supposed to be, and that would never have happened on a professional team at a World Cup or world championship race. You see all these sports bureaucrats at the event and the people who have been helping you can't get in. But I guess every sport is going to be different; as a mountain bike athlete you might be more comfortable with your professional team, and having them locked out on the biggest day every four years I definitely found discombobulating, and it did sometimes lead to things getting missed and mistakes getting made. Did missing a feed make the difference for winning a medal? It makes you wonder."

"But if you are a track cyclist, the Olympics is the end-all and the be-all, and your support system is the national team. I would say most athletes on the track have a pretty tight connection with the national team coaches and staff, so at the Olympics it's not having all new people. So I can see that even in the sport of cycling it's not all the same with the different disciplines."

"As a young athlete, you think the Olympics is the end-all and be-all, and is supposed to be the pinnacle moment of sport. I remember my first experience of going to the Olympics in '92, and feeling like, 'okay I should be feeling like this is the biggest day of the year', and getting to the Olympic Village and being a bit cynical. Karen [Strong, coach] couldn't stay in the Village, she had to stay out - there were only so many spaces for so many coaches, and the decision was that she had to stay out of the Village."

"Going into these very, very sparse apartments [for athletes] - they were fine, but then you see the big IOC hotel next door ... seeing that right from the beginning. Being a young athlete then, being completely exhausted by all the media and stuff before hand - back then we never had any media training - so I was already cooked before we went, just trying to accommodate every single request and being your own secretary; doing all the interviews, trying to train and not get burned out. I found that a bit of a difficult situation as an athlete for both '92 and '96. You get to the event and you are exhausted. You spent so many hours per day doing media stuff and not having anybody to help; at that time you didn't have any COC or CCA liaison officers, you just had to do it all yourself."

"At the press conference in Bromont, which was the last World Cup before [the Games], Julie Furtado [American rider] and I made eye contact and we just sat down in the hotel lobby after and just talked openly about how exhausted and burnt out we both were from all this media circus. And for her it was even worse, being an American at an American Olympics, and a favourite for a gold medal at a first time ever Olympic event [Furtado finished 10th] ... it was crushing. Both of us were at the end of our rope, and it's hard to get a lot of joy out of the Olympics."

"It was so nice having the World Cup final after the Olympics in Hawaii and the world championships in Australia [which Sydor won] ...it was just night and day, as far as the tension and the exhaustion. One thing was so much fun and the other ... I don't even know how to characterize the experience, but it wasn't fun."

"I have so much appreciation for athletes who are able to do it at the Olympics, especially in their home country; I have a different appreciation for what they have pulled off, it's incredible. You often see the unknown pull it off at the Olympics; they're just having fun. And I certainly understand from personal experience why that may be the case."

We spoke about how both the 2012 Olympic champion - Julie Bresset - and the 2016 champion - Jenny Rissveds essentially left the sport for a time after their wins.

"It's definitely an incredible cautionary tale for young athletes who get that Olympic fame - it can be crushing before and crushing after the fact. You should be able to treat the Olympic thing as a normal thing, but it's not. There's this incredible mystique and pressure ... it's an incredible machine, with the media, the sports federations, with the countries. A medal ... it's like war without war. The prestige of the medals and the medal counts, that can have a positive effect, but we can also see so much of a negative effect."

"The athletes are not always treated like people. There are situations where they do not get the proper care. Nobody can understand the intensity of the highs and the lows ... when you win a medal and everybody's all over you, and then when you don't perform, whoa ... you feel really bad. And then in your sport organization you almost feel disowned. There's a lot of stuff that happens due to the Olympic machinery that doesn't affect athletes the same way as a World Cup or world championship race."

"The Olympics is pretty extraordinary. I have a side of myself that is pretty cynical about it all, experiences that have made me quite cynical about certain aspects. But at the same time, I love watching them, I really enjoy it. It is a great movement in many ways, too. It's got a lot of negatives, but I can't say that I don't see the amount of positives that the Olympic movement does produce and create for society in general."