The first ever world titles in the Short Track (XCC) were awarded on Thursday evening in Val di Sole, Italy. Sina Frei of Switzerland took the women's title, while Christopher Blevins of the United States won the men's. In the women's race, Laurie Arseneault was the top Canadian in 19th, while Quinton Disera won a sprint for 16th, just ahead of his brother Peter.

While the XCC has been a fixture of the World Cup for the past few years, it has been used as qualifier for a good start position in the main XCO event. This year is the first year it is a standalone rainbow jersey event, and the intense action of these 20 minute races was cranked up even higher with a world title on the line.

The course featured punchy climbs in the first half before riders hit the berms of the 4-cross circuit, leading into a descent and a final 300 metre section of grass with a U-turn 100 metres from the finish line.

The women's race quickly came down to six riders - the three Swiss Olympic medalists - Frei, Linda Indergand and Olympic champion Jolanda Neff, plus Evie Richards (Great Britain), Pauline Ferrand Prevot (France) and Rebecca McConnell (Australia). These six rode together until the final lap, when first McConnell and then Neff fell off the pace. 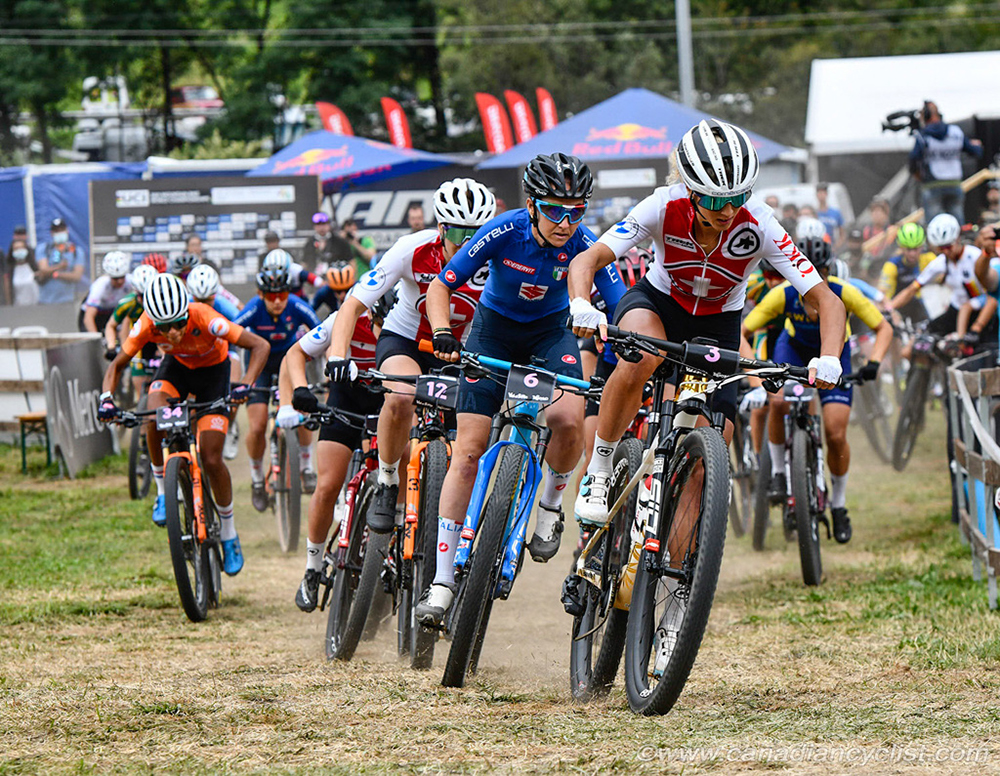 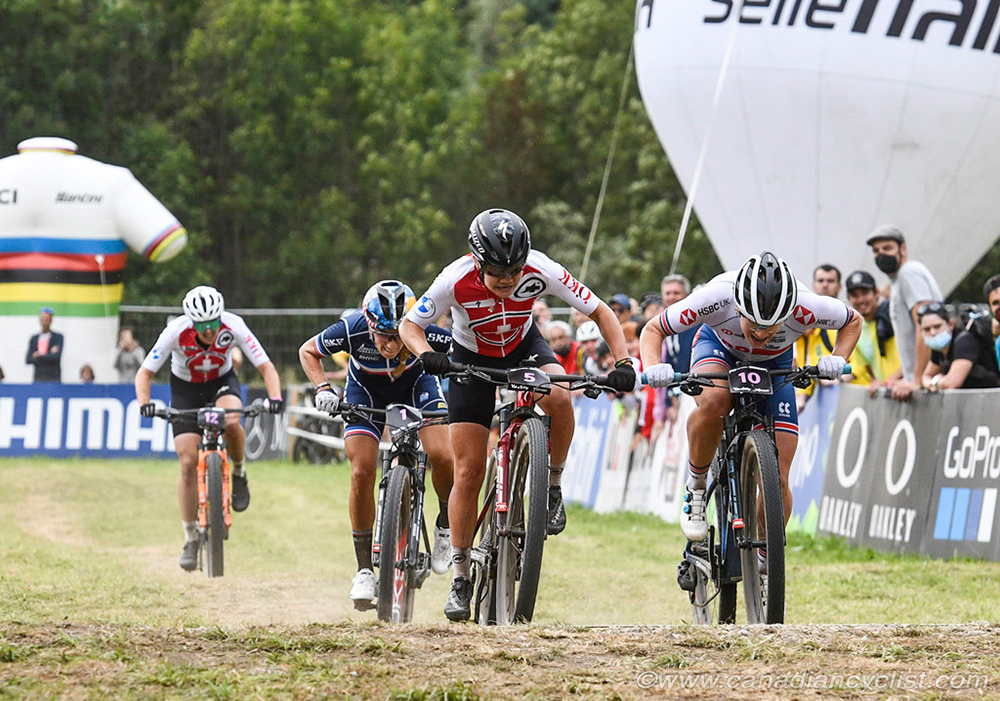 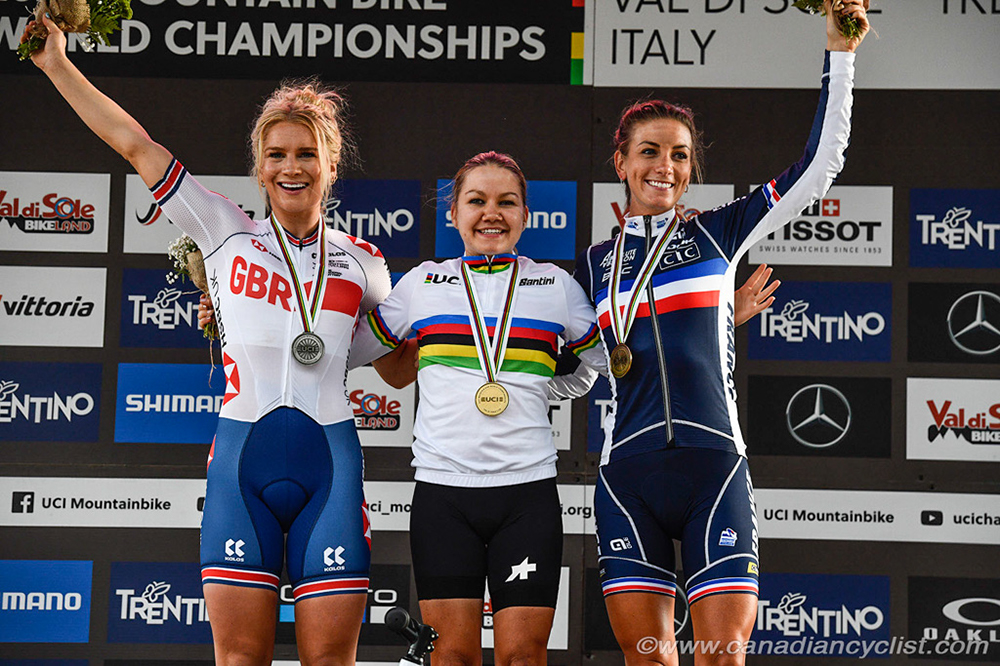 Coming into the final 250 metres, it was a battle between Frei and Richards to got the holeshot into the final 180-degree turn 100 metres from the finish line. Frei came out of the corner first, and held off Richards at the line as both riders threw their bikes. Ferrand Prevot finished just behind in third.

Frei came into the race with a strategy:  "In the beginning of the race I was waiting. But in the last lap I finally tried to be in the front on the last lap, but I wasn't really sure if I could make it. I went all out, but the finish was super tight with Evie, so I was happy to win that sprint finish."

"My coach always tells me I spend too much time at the front, and I probably did," admitted Richards. "It was a bit nervous out there and I wanted to stay near the front, but I was maybe too much at the front."

Arseneault rode in the top-10 for the first few laps before gradually fading over the rest of the race. Sandra Walter was 26th and Haley Smith 30th. 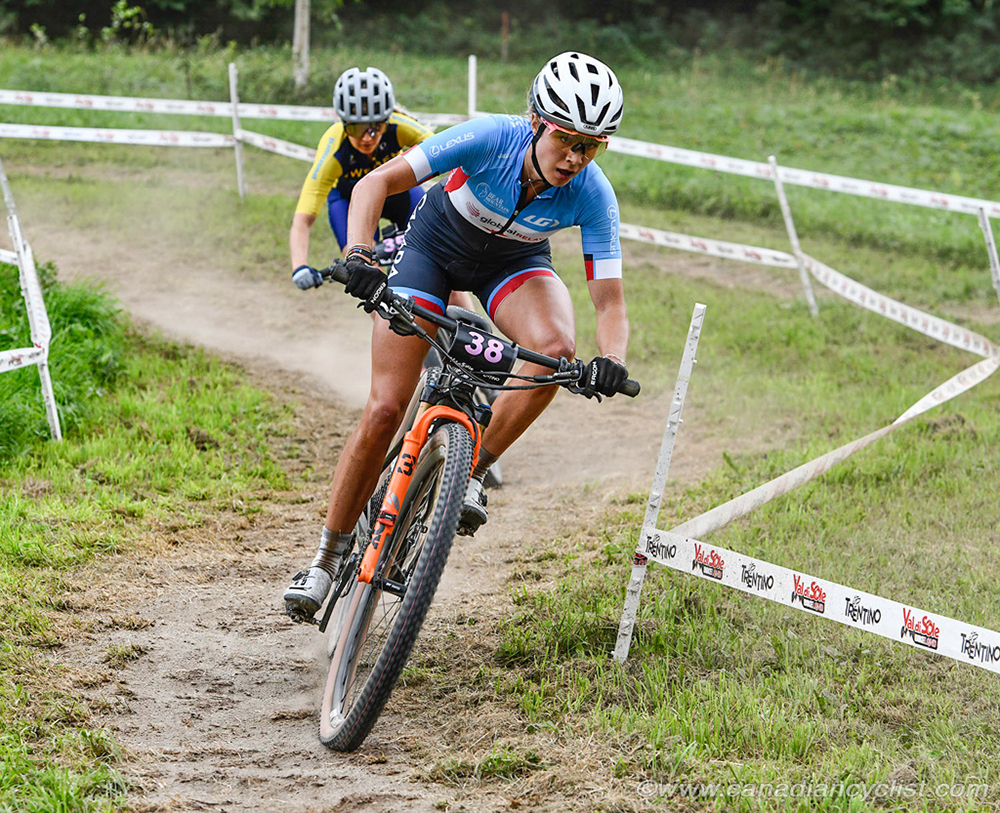 "This was my first short track at the international level," said Arseneault, "so it was a very good experience. It was so fast. I gave so much in the first laps [to move up] that I was so tired by the second part of the race. My strategy was ... not to die! Just keep up the pace and not crack in my head. Goal achieved."

Blevins of the United States win was the first by an American man in a cross-country event since John Tomac in 1991 - also in Italy at Ciocco.

The men's race saw surges come in waves for the first half of the race, dropping the lead to half a dozen by the top of the climbs, only to come back together to a group of 15 or so on the flat. By Lap 5 (of 8), the leaders had pretty much come down to seven - Blevins, Henrique Avancini (Brazil), Max Brandl (Germany), Ondrej Cink (Czech Republic), Alan Hatherly (South Africa) and Filippo Colombo (Switzerland). 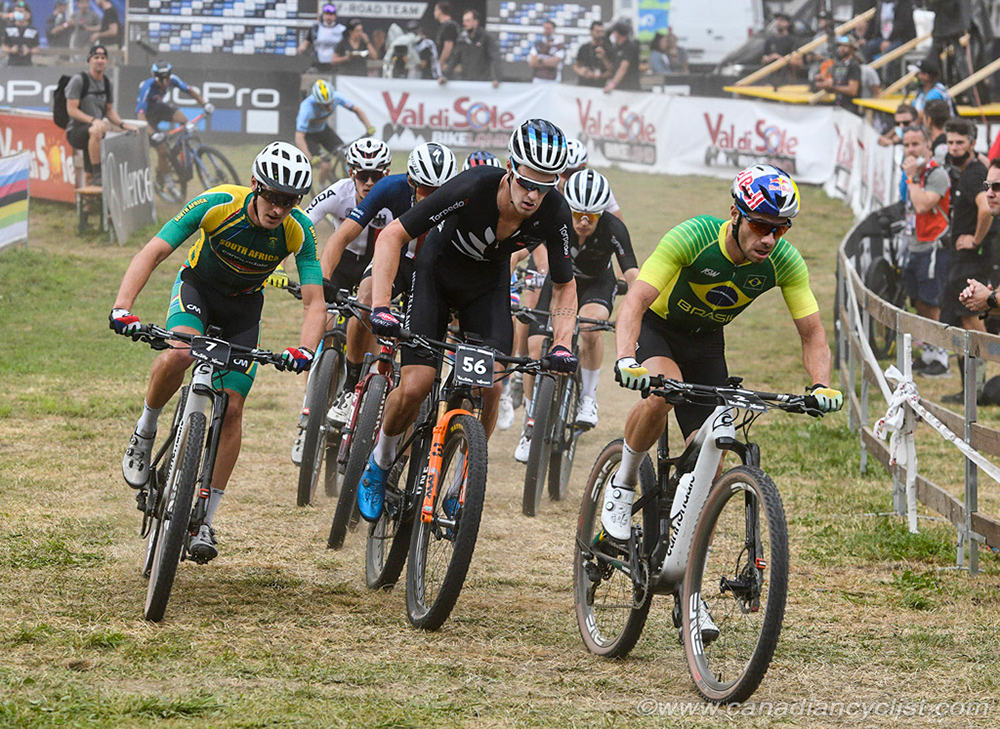 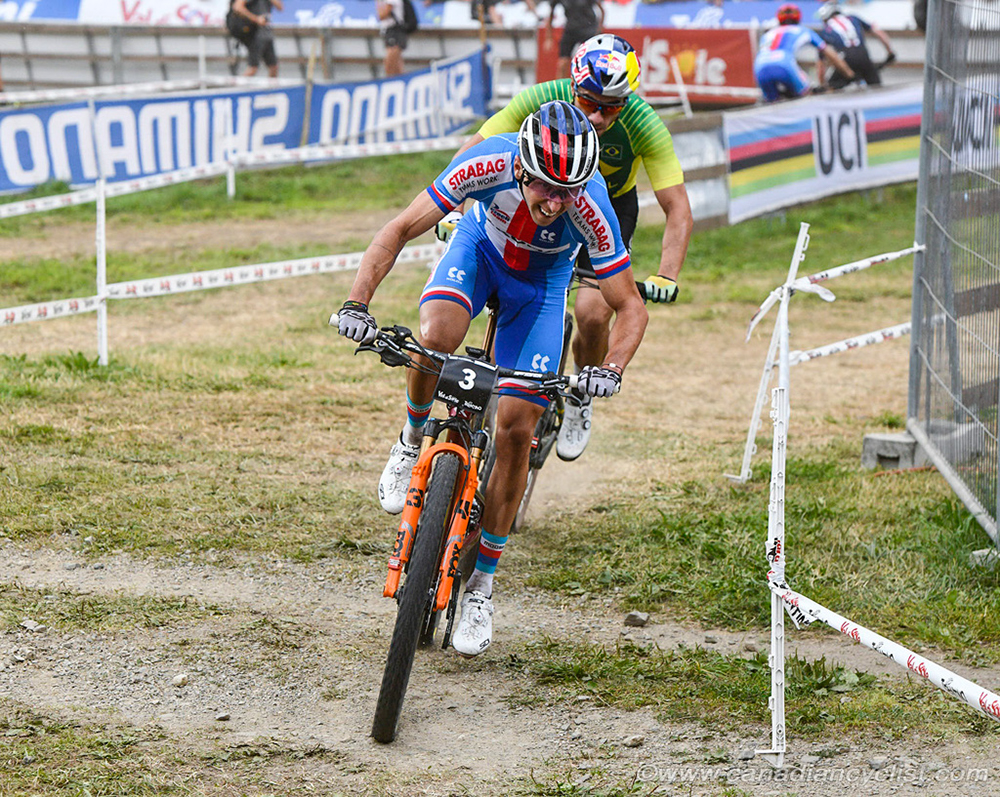 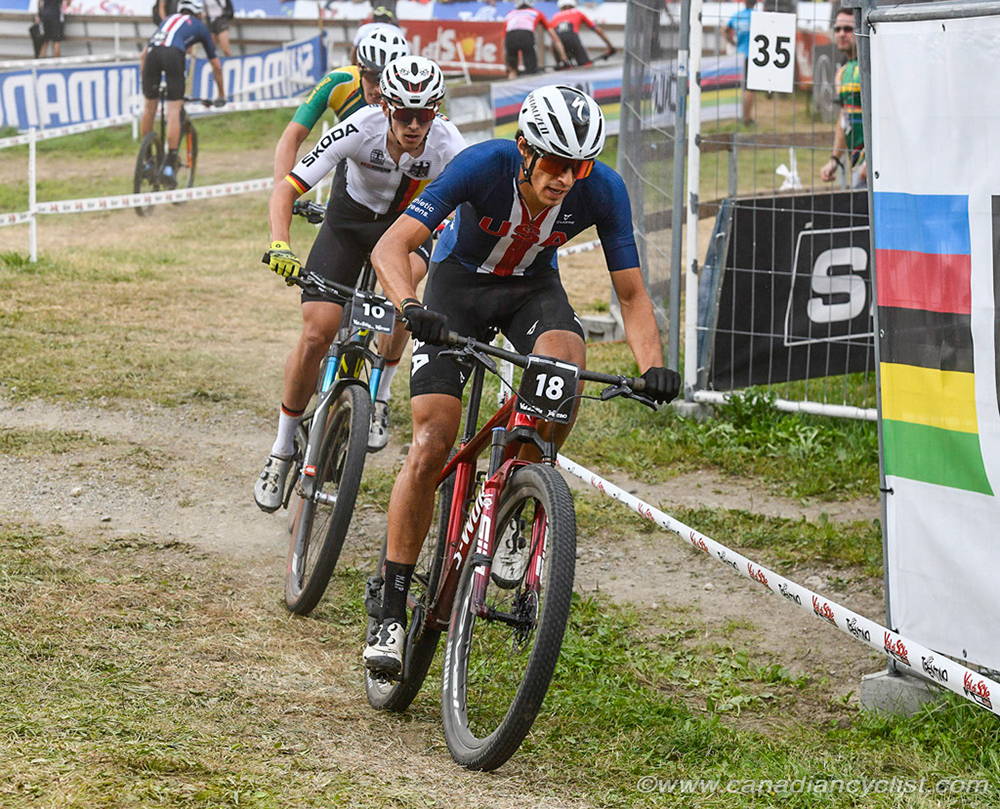 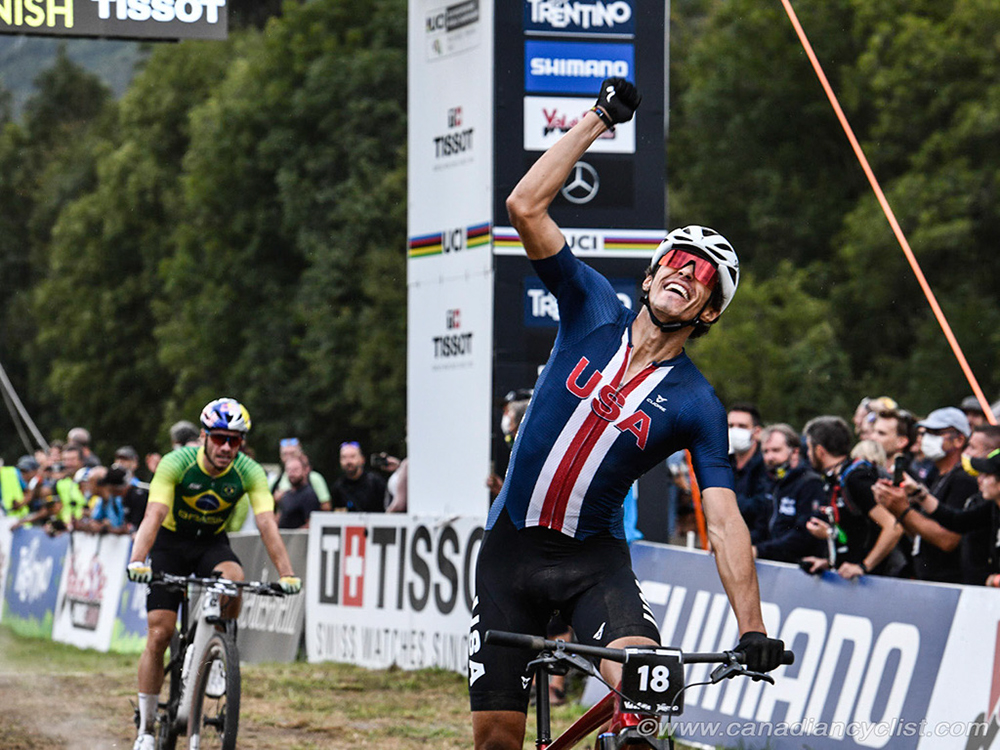 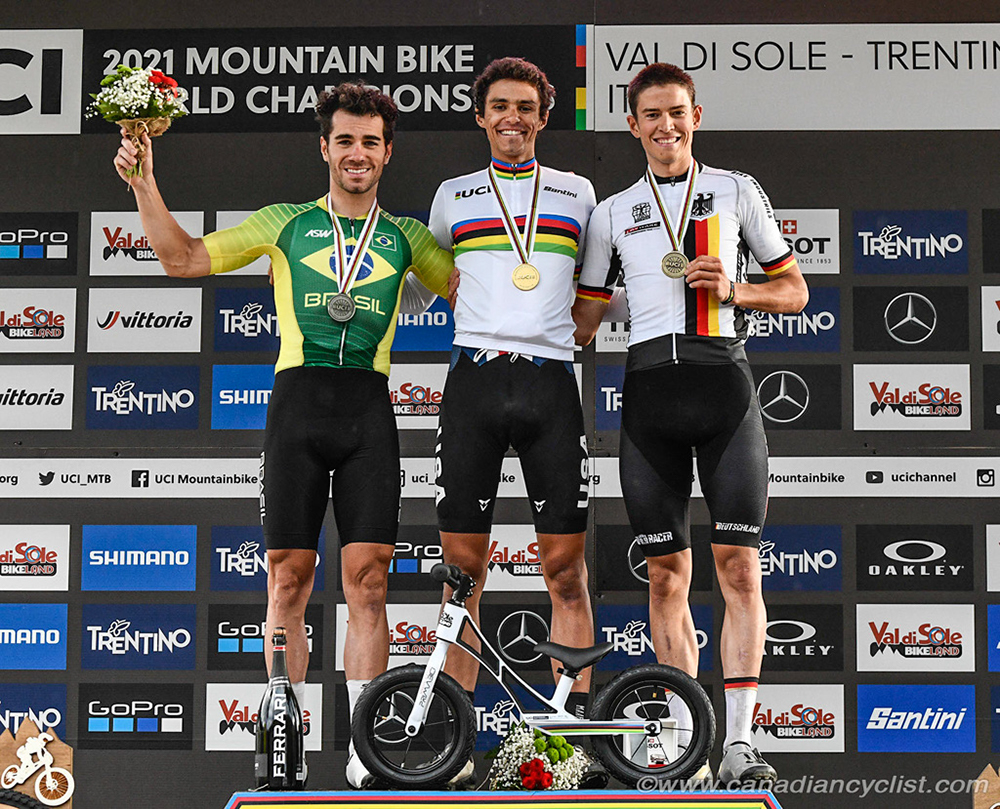 Cink attacked on the fifth lap, taking Avancini with him, but the rest of the group, minus Colombo, were back with them by the penultimate seventh lap. Brandl then tried an attack just before the start of the final lap, and initially gained some ground as no one wanted to lead the chase. However, he was fading as they went through the 4-cross section, and was caught with less then 300 metres to go. There was a slight pause in the action with the catch, and Blevins pounced, opening a few meteres before the last turn and then powering down the final 100 metres to win by a few bike lengths. Avancini won the sprint for silver ahead of Brandl.

"I grew up doing short tracks, and I've been dreaming of this race for a few years," said Blevins. "I didn't know what chance I had against these guys, so I just tried to stay composed and wait for the finish. I did surprise myself a bit; it was an incredible ride."

Avancini, who has struggled all season, was happy to return to the podium, "I have some mixed feelings, it's been a hard season for me, so on the personal side it was great to be on the start line today and feel competitive once again. It's been a while since I've felt happy racing my bike and feel the fire burning."

Quinton Disera moved up strongly on the first two laps, into the top-20 by the start of Lap 3. He then started passing fading riders in the final three laps, just holding off a chase group for 16th. His brother Peter was in the group behind, trying to slow the tempo. Tyler Orschel was 28th and Marc Andre Fortier was 32nd. 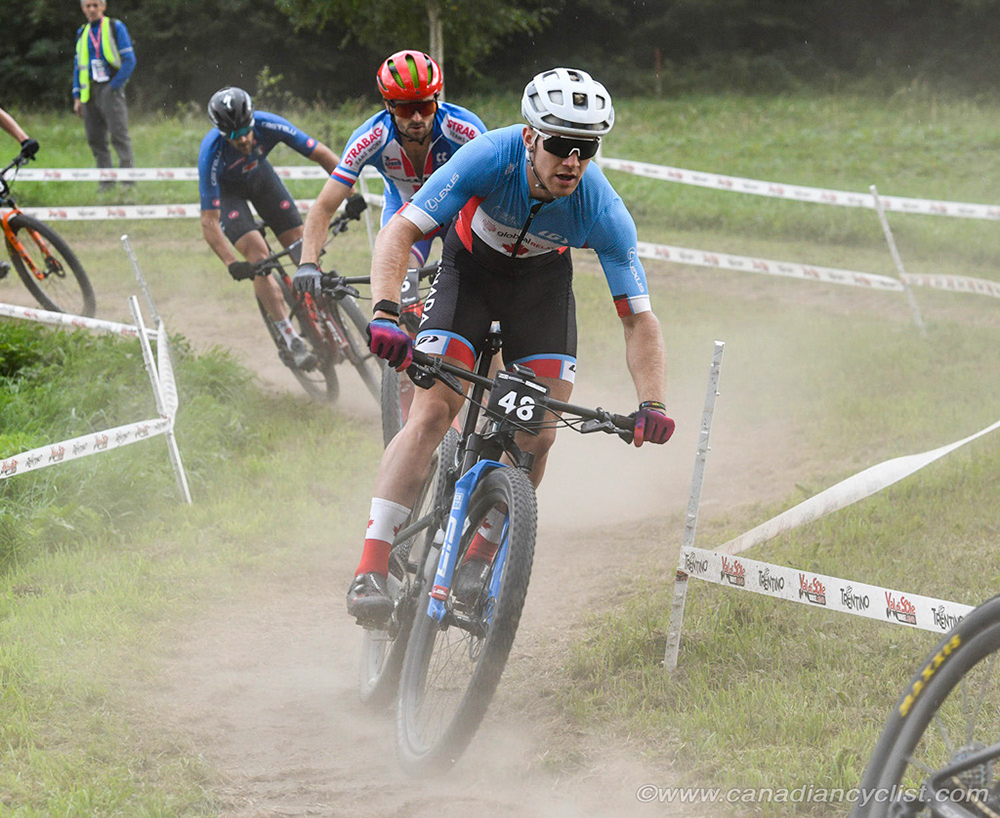 "It was kind of nice to have a qualifier on Tuesday, because this is my first Short Track of the year," said Quinton. "I was called up for a pretty good position, but right off the bat I dropped back because the line I was behind wasn't the fast one.  By the third lap I could see that gaps were opening up, so I dug a little bit to get myself up. Then people started fading who had started fast, and I just kept charging forward."