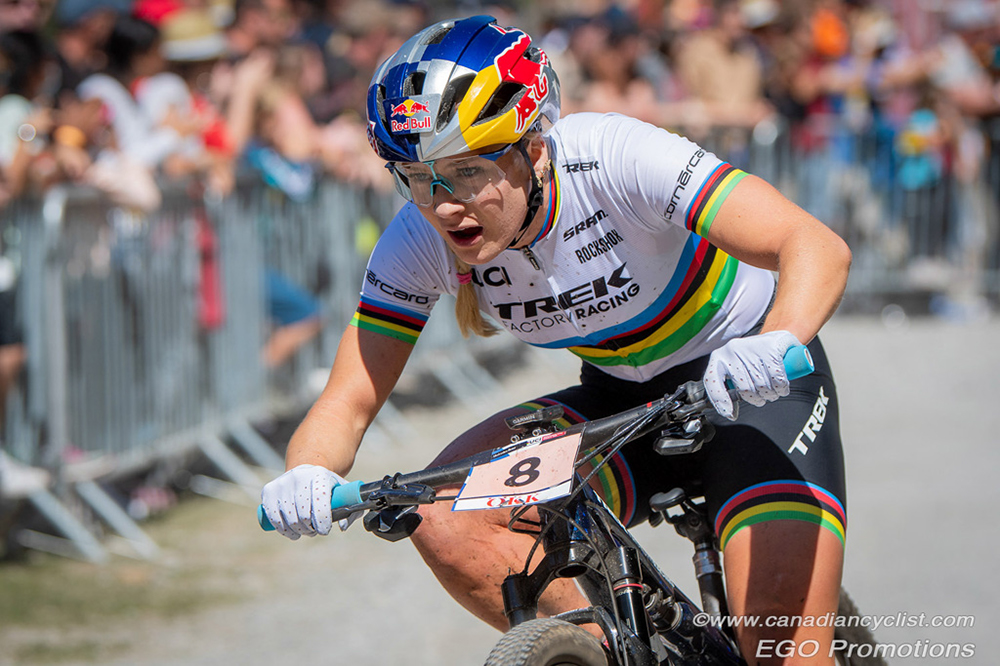 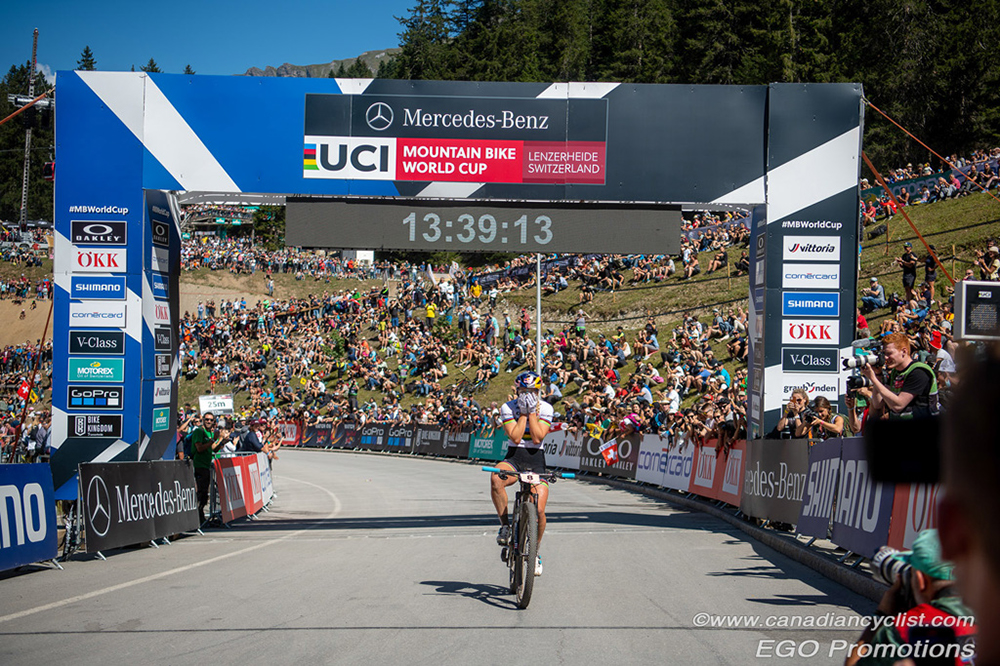 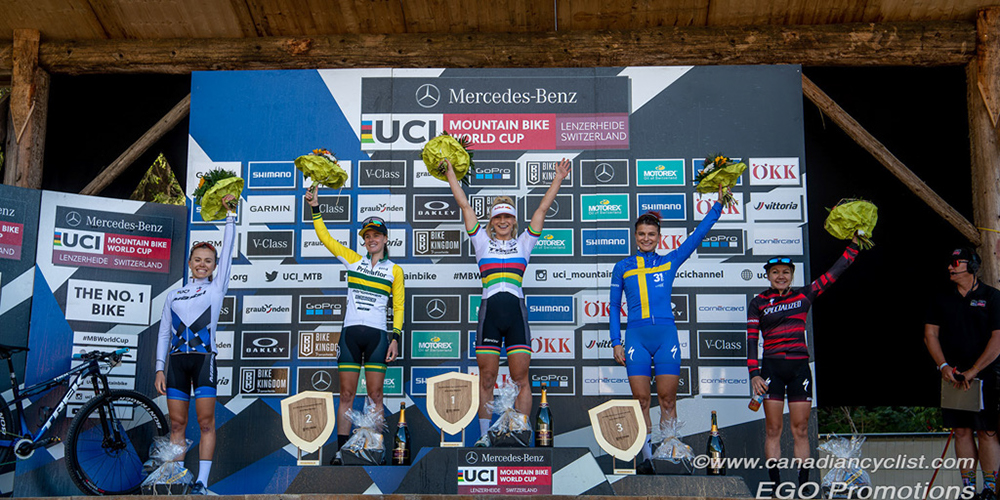 Riders in Lenzerheide faced a circuit with long climbs and technical, rooty descents. This is a course with almost nowhere to rest. The women did five laps plus a start lap that replaced the opening dirt climb with a long asphalt climb. 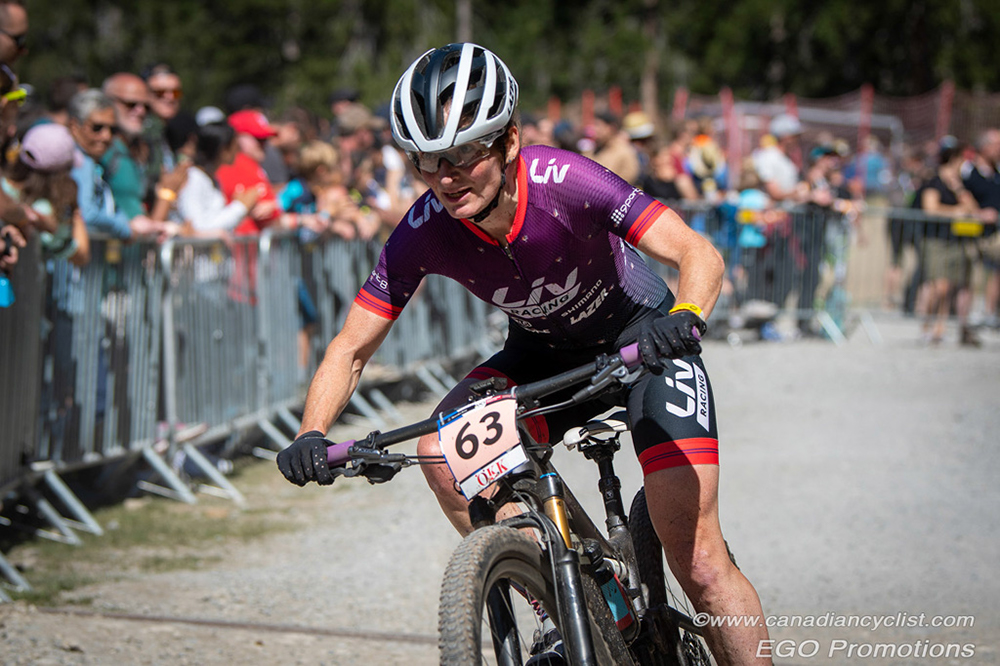 "The pace was really high today," said Walter, "because the course was super dry and running really fast. It was really exciting, because the gaps were small and I was constantly battling with someone. About halfway through the race, I caught and passed Jenn Jackson on the new climb. When she passed me back at the top, it got me a bit more fired up and I had fun following her wheel, because we had done our course prep together. I eventually got away from her and really focused on attacking every punchy section and riding smooth and fast over all of the roots."

"The new climb basically goes up a downhill flow trail and riders have to up a series of steep berms. It's really hard and replaces a section of lower grade paved climbing. It definitely changes the feel of the course."

"I'm pleased with my effort and am looking forward to the final World Cup in Snowshoe in a couple of weeks. Thanks to Derek, Shorty, Scott and Dan for the race day support."

Lecomte came into this race undefeated in World Cup competition this season, in fact, she had led every lap of every World Cup in 2021. She needed to finish seventh or better to mathematically win the overall title before the final round in Snowshoe, USA, in two weeks time. However, she has been sick, missing the world championships last week. Pauline Ferrand Prevot (Absolute Absalon BMC), second in the overall standings, has been struggling in this second half of the season and decided to end her season before Lenzerheide, opening up the rankings to riders behind her.

The race had a very fast start, with Lecomte moving into her usual spot at the front, joined by Rissveds. Richards and Olympic silver medalist Sina Frei (Specialized) bridged up to them, as did eventually McConnell and Anne Tauber (CST PostNL Bafang). By the second lap, it was clear that Lecomte was not her usual dominant self, and was getting dropped on the climbs. Rissveds and Frei were the most aggressive, with Richards just following. Tauber was the first to be dropped for good, and then Lecomte.

When Richards attacked on the main climb in the fourth lap, that was it for Rissveds as well, with McConnell moving into second ahead of Frei. This looked to be the final finishing order, until Frei suffered a rear flat in the final half lap, allowing both Rissveds and Lecomte to get by her before she could get a wheel change in the pits.

"I just can't believe it," said Richards. "It was such a weird race. Everyone was holding back the whole race and nobody wanted to commit. So I had to be very patient. I can't believe how everything has just fallen into place at the end of the season, I'm shocked. There's loads of pressure when you have the [rainbow] jersey, so I really didn't think that it [her first World Cup win] would come this quick. But my coaches said I had good form and to be confident in myself and be patient ... I think I did that and Yes!"

"Every race we set a different plan so I can learn, and this race was a different plan that we haven't tried before [waiting until late in the race]. I didn't feel strong on the first lap, it went too fast. But luckily the front group backed off and it gave me time to recover, and I was able to attack later."

Lecomte, still an Under-23 rider, had her poorest showing of the World Cup season, but was still able to take the title. "I'm very happy, because it was not my goal at the beginning of the season [to win the overall title]; I could not imagine that I could do it. For me, this was one of the hardest races of my little [short] career. The last two weeks have been very difficult for me mentally and physically." 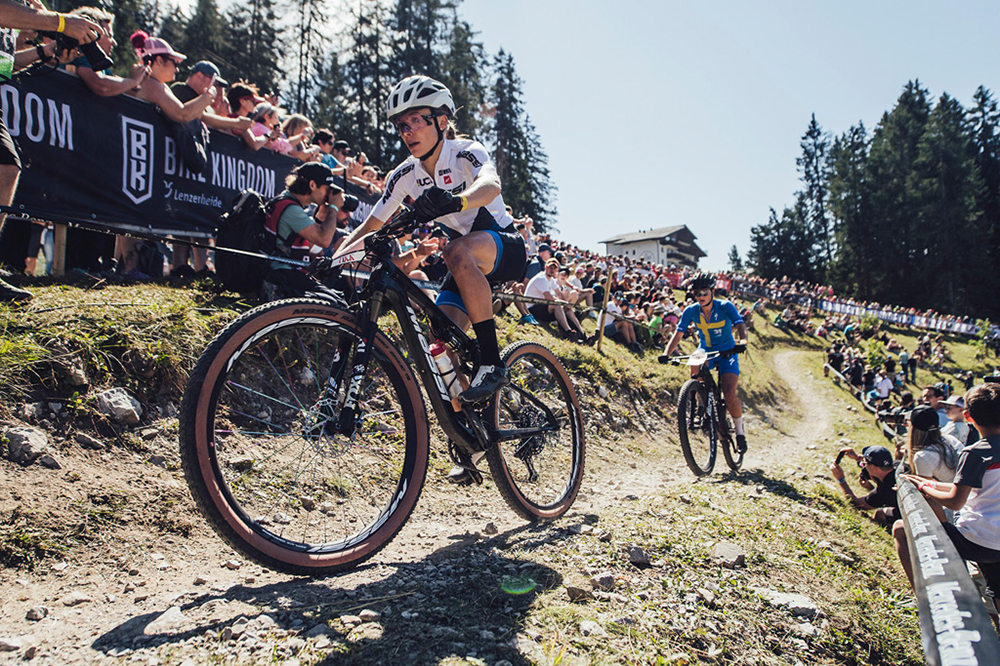 Lecomte leaves Lenzerheide with 1550 points, an insurmountable lead of 485 points over Rissveds, who moves up to second ahead of the absent Ferrand Prevot. McConnel jumps one spot to fourth in the standings and Evie Richards from eighth to fifth - both could overtake Ferrand Prevot in the final round.

Batty remains the top Canadian in the overall rankings, improving to 23rd from 25th. Catharine Pendrel (Clif Pro), who skipped Lenzerheide, drops to 31st from 26th. Jackson is 34th, one spot ahead of Walter. Haley Smith just makes it into the top-50, in 50th place.