"The success of the whole competition has been pretty surreal," said Cycling Canada's NextGen Lead Coach, Jenny Trew. "The entirety of the Canadian cycling community has helped these boys learn the trade and develop the skills to be competitive with the best in the world. It's so rewarding to see the results of having the Mattamy Velodrome in our backyard, with both athletes developing through the programs provided by their clubs, the NCIM, the OCA and Cycling Canada." 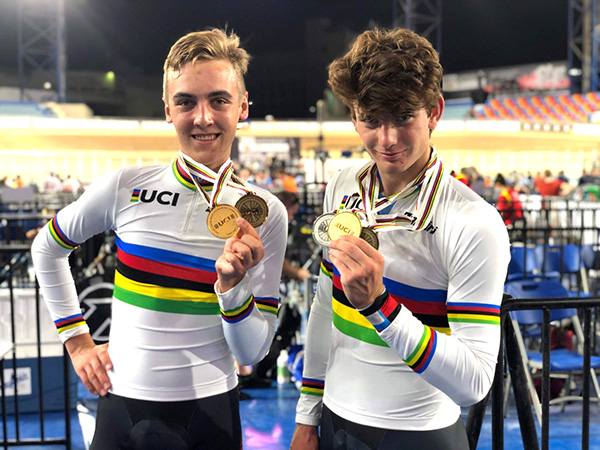 Men’s 10km Scratch Race: Gold for Mattern
The first qualifying heat was an extremely tactical one, and the Austrian Raphael Kokas proved to be the most astute at the waiting game. He lapped the peloton, as did Algeria’s Salah Eddine Ayoubi Cherki, while the Ethiopian Zerihun Letera Dabesa was the fastest of the rest of the field. The second heat was faster (10:49mins to cover 7.5km, ahead of the final raced over 10km) and Mohammed Najib Sanbouli (MAR) took first place ahead of Mathias Møller Jørgensen (DEN).

Switzerland’s Pascal Tappeiner came 10th in the second heat. That was enough to qualify and he was much more inspired in the final, sprinting to the silver medal ahead of Italy’s Lorenzo Ursella. But Carson Mattern had already lapped the field to bring Canada their first gold medal in the Scratch Race since it was introduced in the 2002 UCI Junior Track Cycling World Championships.

Men’s point race: Gold for Bibic
After two intense qualifying heats, 23 riders from as many countries were ready to battle for the rainbow stripes over 25km (100 laps). Ukraine’s Yurii Shcherban went for the early points, dominating the first two sprints and the fourth (five points each time). He was still strong at the finish, claiming the final 10 points on the line. But it wasn’t enough to climb onto the podium after an eventful final.

Five riders lapped the field not once but twice. Mathias Møller Jørgensen (Den) finished sixth as he didn’t score any sprint points (40 points in total, Shcherban had 46), while the other four dominated the final standings. Grégory Pouvreault (Fra) had to settle for fourth position, only one point behind the silver medal.

Dylan Bibic was the most consistent of these attackers and took the rainbow stripes with a total of 56 points. That’s Canada’s second gold medal in this year’s UCI Junior Track Cycling Championships. They’d recorded three in total across the previous 45 editions of this event.


Men’s Omnium: Silver for Bibic
After three of the four events of the Omnium, Daniil Valgonen was in prime position to add further gold to Russia’s amazing tally. He had started his day with victory in the Scratch Race and retained the overall lead through the tempo race (sixth) and the elimination (third). These performances gave him a total of 106 points, 12 more than Benjamin Boos (GER), while Dylan Bibic (CAN) was third with 94 points.

In the deciding points race, Valgonen only managed to score five points, bringing his total for the day to 111 points. Bibic, gold medallist in the points race on Friday, lapped the field and moved past Valgonen with 122 points. But Radovan Stec (CZE) achieved a golden move, lapping the field twice to move up from seventh (80 points) ahead of this final event to winner (135 points)!

In the final event of the Championships, the men's Madison, Dylan Bibic and Carson Mattern teamed up to take the bronze medal.