Canadian national road and track team member Annie Foreman-Mackey has announced her retirement from the international cycling stage, as she focusses on her medical studies in B.C.. In a heartfelt letter, she talks about her racing career and thanks her teammates, national and trade team staff, and the Canadian cycling community.

Annie started racing in 2011 - her first race was the Good Friday Road Race, where she was the second Senior 3 woman. She also raced her first Road Nationals that year, finishing 24th overall and fifth among Under-23 riders, behind future national teammates Denise Ramsden, Leah Kirchmann and Jasmin Duehring (Glaesser at the time) - she is actually fourth in the official results, since Jasmin did not yet have her Canadian citizenship.

At the national and international level she started to show her skills in 2014, finishing second in both the Individual and Team Pursuits at the Nationals, as well as fifth at the Chrono Gatineau. In 2015, she was second at Gastown on the road and medaled in both the Individual (3rd) and Team (2nd) Pursuits at the Pan Am Continental Championships. 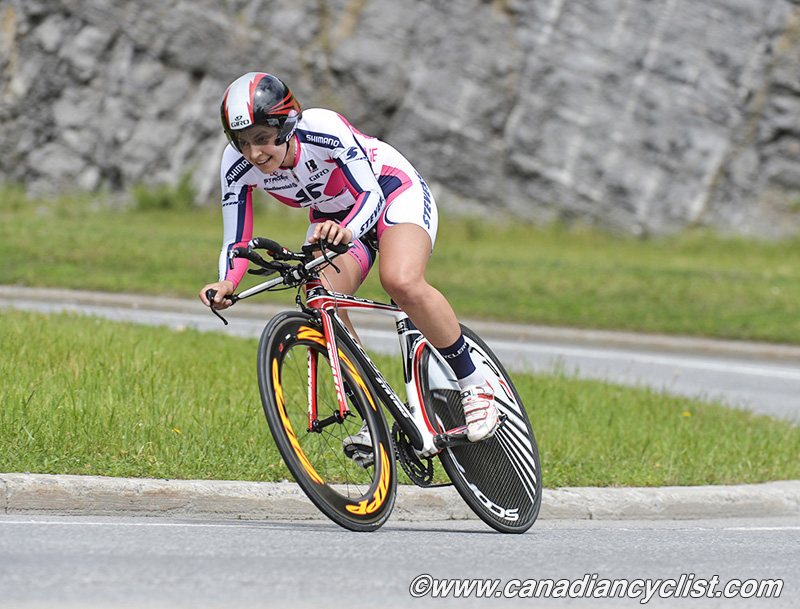 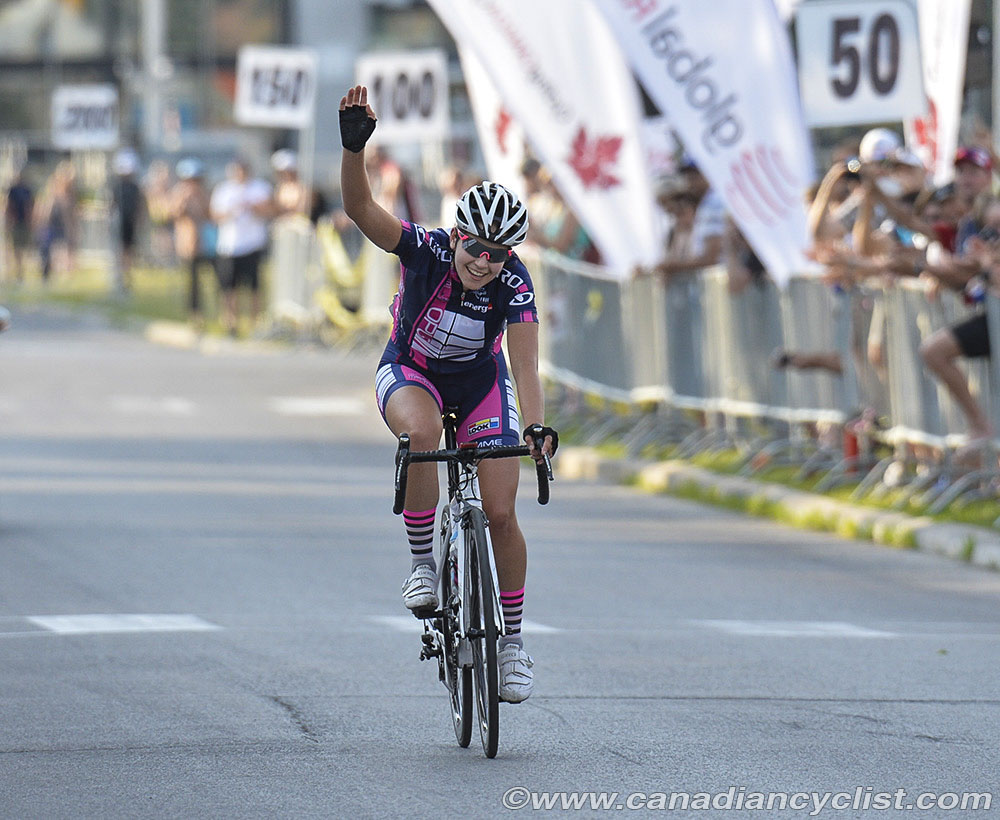 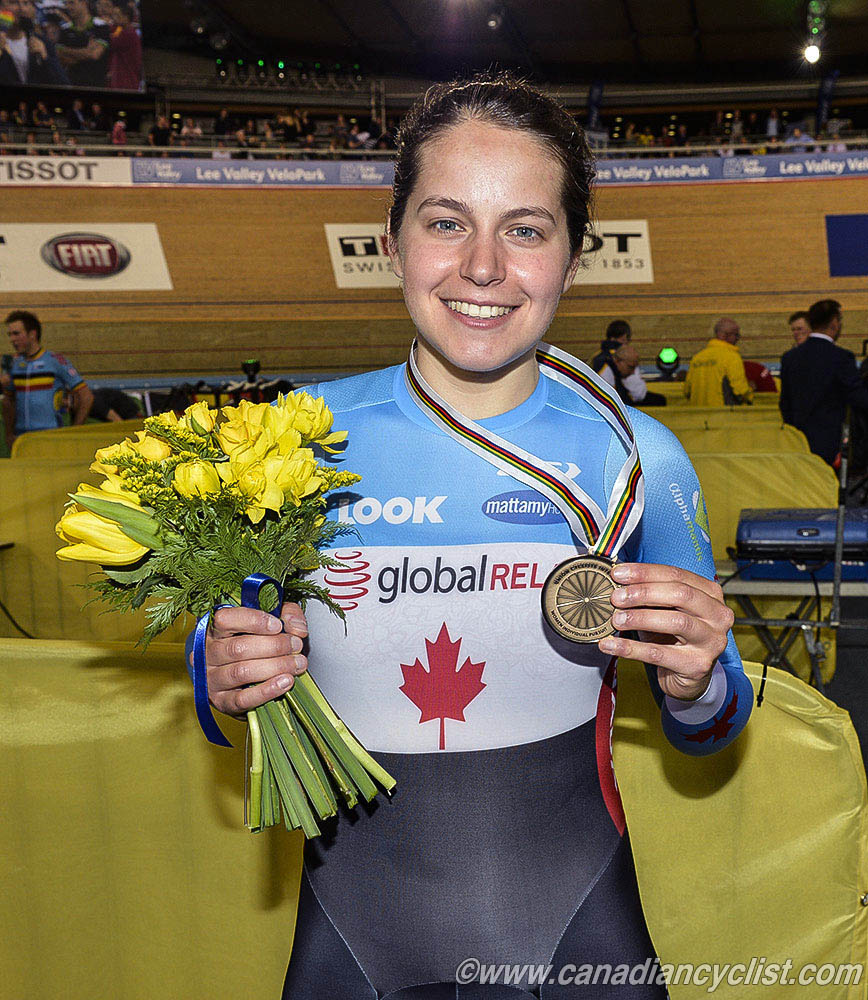 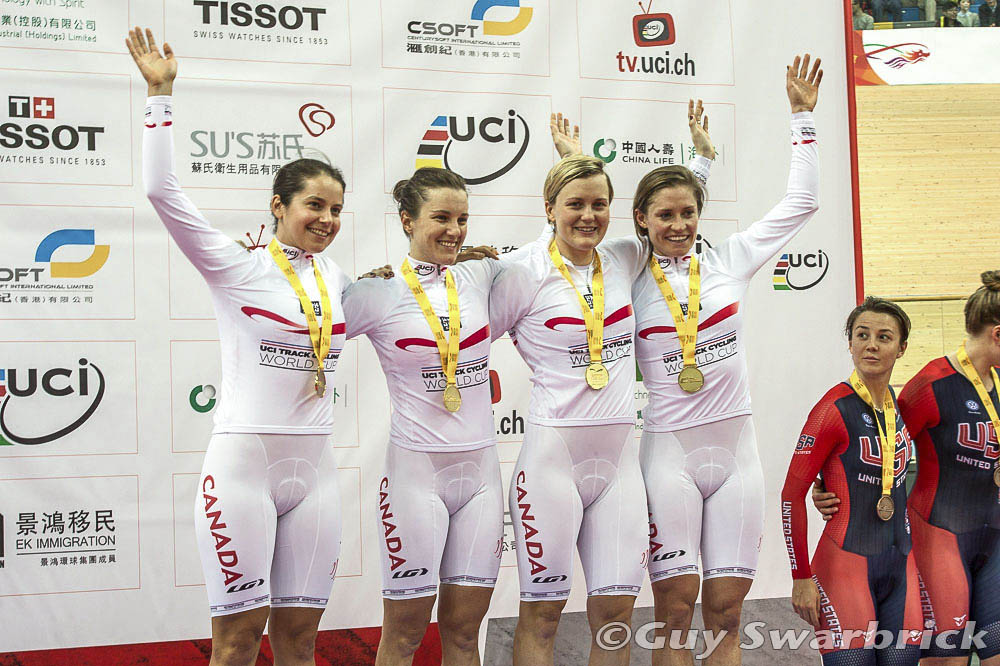 2016 was her breakthrough year, winning a bronze medal in the Pursuit at the world championships and winning two World Cups as part of the Canadian team in the Team Pursuit. She also won the Canadian Elite Women's national road title, after a long breakaway effort. At that point, she was part of the A Squad for Canada's Team Pursuit program, with multiple World Cup podiums to follow, including a win at the team's home track in Milton. In 2018, she was a member of the squad that won the bronze medal at the Commonwealth Games, where she also finished seventh in the TT and 17th in the road race. 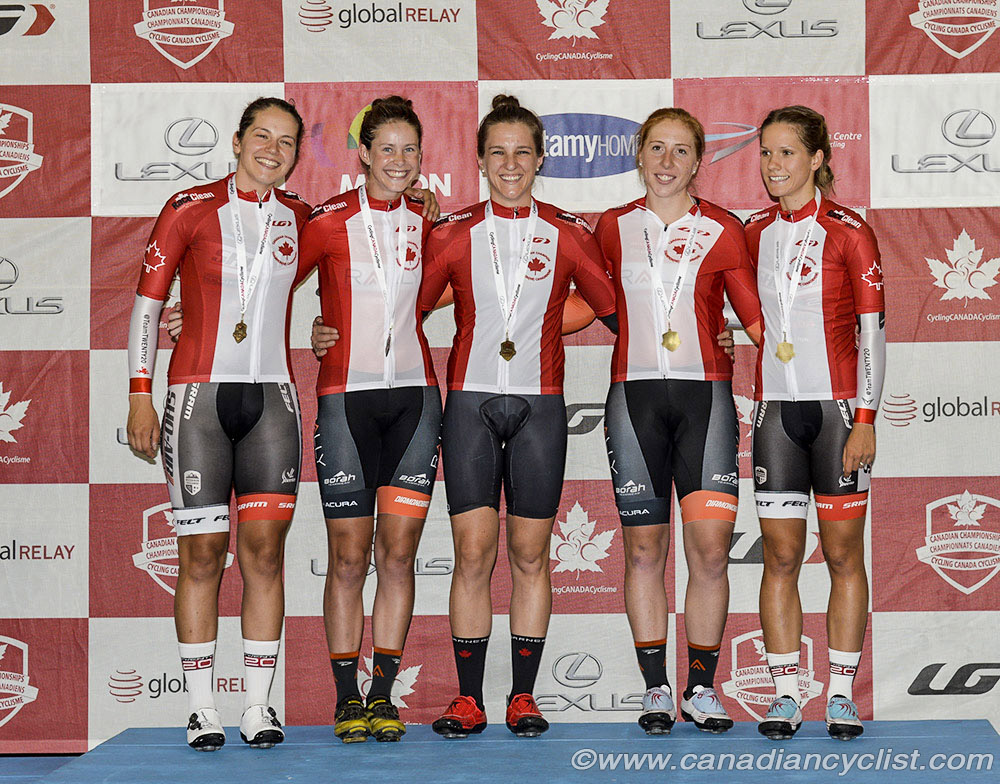 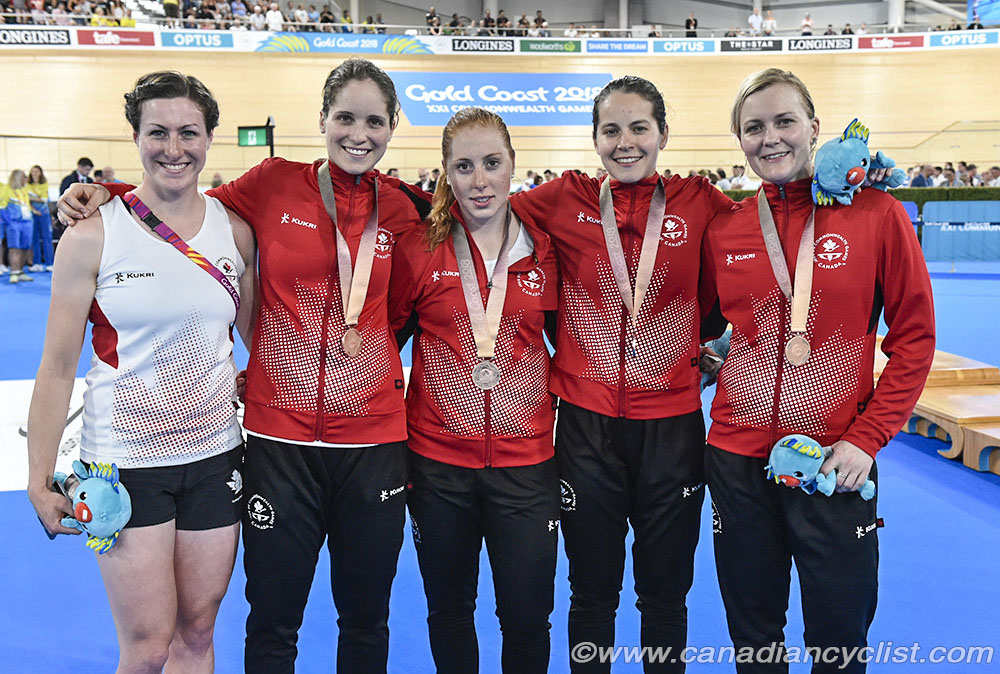 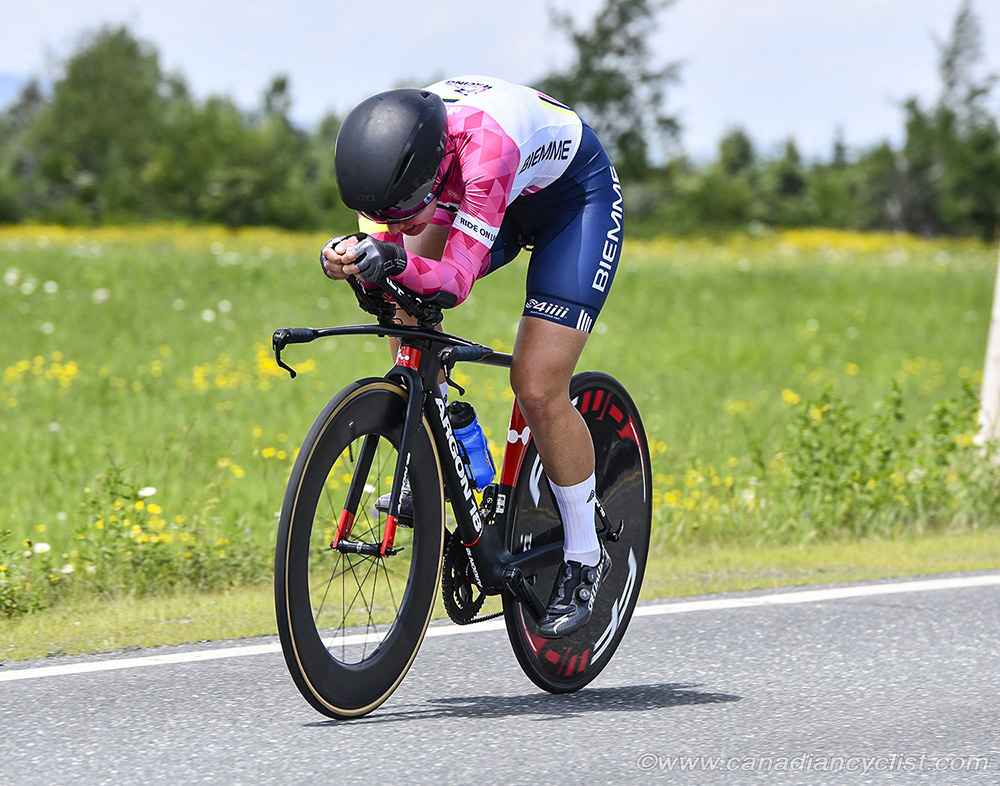 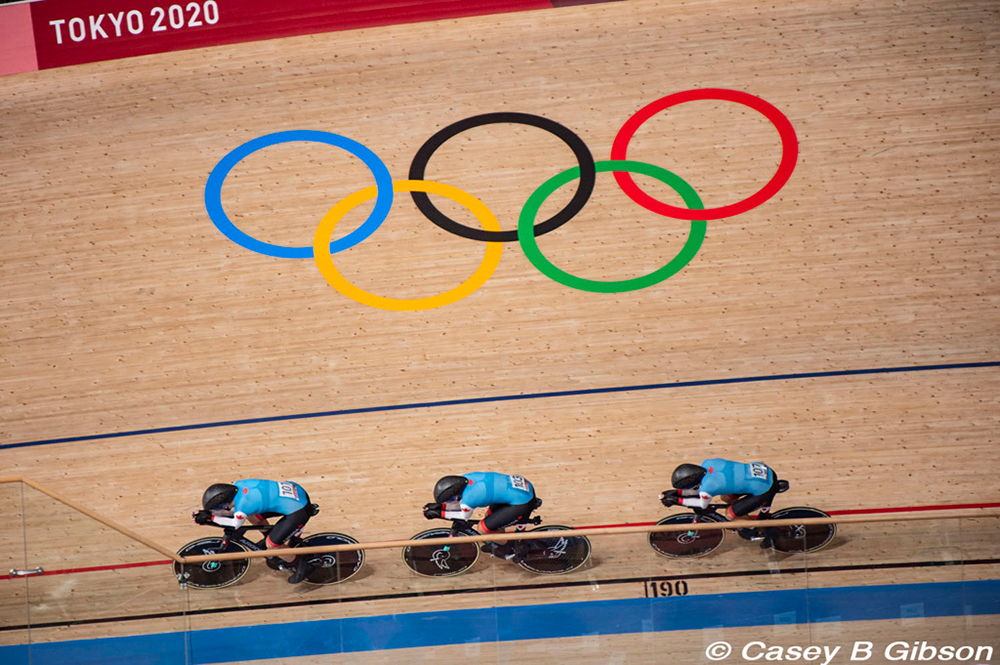 2019 saw the Team Pursuit squad become Continental Champions and Annie take silver in the Individual Pursuit, with more World Cup podiums. She put off her planned 2020 post-Olympic retirement for a year, and represented Canada at the postponed Tokyo Games this year, where the Canadians finished just outside the medals in fourth place.

Below is her retirement statement:

With a brimming heart and immense gratitude, I can announce my formal retirement from cycling. It has taken me a few months after stepping off my bike after our final ride in Tokyo to take stock, reflect, and reset as I dive into the next chapter. I am choosing to look back on these wild years of high-performance sport not by evaluating the medals and races that were or were not won, but rather by remembering the people with whom I shared space, the places where I travelled, and the lessons I learned along the way.

As a developing athlete, I struggled with my athletic identity and questions about the role sport should play in society. Over time, I grew to believe in sport's ability to push the limits of possibility and help inspire humanity to see that we are capable of more than we think possible. I was encouraged to become a "student of my sport" early in my career and held this close as I sought to embody a beginner's mindset even in my final days. More than students of the sport, I'd now describe athletes as students of the human body, the human psyche, and the human heart.

When I toed the line at my first road race in Hamilton, Ontario, little did I know of the journey that would ensue, taking me across the world, towards peaks of exhilaration and into depths that I hadn't imagined. From muddy cobbles in Europe to the beauty and calm flow of a well-executed team pursuit, shaky legs and sweaty palms on the start line, and that final big breath as the countdown clock approaches zero. Also - of course - tears of joy, exhaustion, gratitude, and disappointment shared after finish lines, lying in grassy fields, on hot pavement, in icy vans, or unable to walk off the track after a race. These moments are what kept me coming back for more.

As I grew through my 20s, cycling was a constant companion, challenging me to find my voice, reexamine my motivations, explore the inner workings of my mind, and contribute to something much more significant than myself and my aspirations. I drew strength from those who believed in me and found motivation from those who didn't. Competing for Canada at World Cups, World Championships, and at an Olympic Games felt like a big, audacious, far-fetched goal that, for a long time, I didn't believe possible. But slowly and diligently, and with the help of so many incredible people who had confidence in me even when I didn't, I chipped away at the small steps, deconstructed some of my internal hurdles and made it a reality.

The privilege of wearing the maple leaf on my back never grew old. Not one to actively seek out the limelight, I found pleasure in my secret quest to leave the cycling world better than when I entered, and I can only hope that I achieved this final goal in some small way. I am motivated to continue drawing from my experiences to help shape my ability to care for patients as I move towards my career as a physician and navigate a new future. Though sport will continue to be a fundamental part of my life, I am excited to see my relationship evolve as I find new ways to integrate meditation in motion into future routines and goals.

All of this to say, I want to thank you all from the bottom of my heart for sharing this journey with me and for supporting me in more ways than a thank you could ever begin to do justice.

To my WTE teammates over the years:
Alli, Ariane, Georgia, Jasmin, Kinley, Steph, Laura, and Kirsti. You became my sisters in sport and life. There is no one with whom I would rather trust to blindly barrel around a track at 55-60 km per hour, centimetres apart, without brakes, or for whom I would commit to garborating laps at the end of races.

To my Cyclery Family:
Teammates turned lifelong friends; Jenny and Chris, who built from scratch such an incredibly nurturing and successful road program; Camden and Ellie for spending their earliest years of life being passed from athlete to athlete at bike races; Vince and the Cyclery for their unwavering support; and Ellen, whose presence and energy I continue to hold close with every pedal stroke.

To the coaches who guided me through my athletic journey and the life challenges that popped up along the way:
Leigh, who modelled grace, strength, and resilience early in my cycling journey and helped me to forge my own path in sport; Jenny, for re-inspiring me again and again and single-handedly keeping so many Canadian cyclists in the sport over the years; Craig, who helped me build such a strong foundation of team pursuit strength and knowledge; Matt, whose deep belief in our team - though it felt unfounded at times - was critical to the way that we were able to navigate the pandemic, and who supported me wholeheartedly when I took a roundabout, non-traditional path to Tokyo; and so many more mentors, team directors, and managers who shared wisdom and perspective.

To the team behind the team:
Physiologists Kurt, Emily, and Mike whose commitment to innovation, learning, and truly understanding me as an athlete was fundamental to my athletic journey; S&C coaches Stephen and Sam who took me from clumsy, box-jump-injuring newbie to gym-convert; dieticians Nicole and Christine who nurtured a healthy relationship with food; the many physios, massage therapists, physicians, chiros, psychiatrists, and mental performance consultants who kept my body and mind healthy and happy, Tara, Aly, Ozy, Remo, Katherine, Jenn, Sean, Carla, and many more; mechanics Dan, Ryan, Scott, Aarron - the unsung heroes of all cycling teams - who made sure that my bikes were race ready and put up with my subpar bike maintenance; and the Cycling Canada staff, managers, and leadership team who have devoted their lives to getting us to the start line in the best shape possible, and whose work often goes unseen behind the scenes.

To my training partners near and far:
For turning up rain or shine with excitement and openness to whatever Type 2 adventure I had planned for the day. For the countless hours of life chats shared on endurance rides and for providing me wheels to chase on interval days.

To my family and friends:
Who exercised compassion and patience with me, picking up phone calls across time zones, and loving me despite all of the times I missed key life events and celebrations while on the road. Who re-grounded me and provided me with perspective when I needed to pop out of the athlete bubble.

To my housemates over the years:
Who have dealt with too many bikes in shared spaces and sweaty bike kit hanging from doorhandles. Who have fallen asleep to the hum of trainer workouts outside their doors at night and left snacks out in the kitchen for when I got home from a hard training session.

To my academic supervisors and colleagues:
Who put up with abnormal work schedules and paved the way for me to pursue my studies in parallel with my athletic commitments.

To the many host families:
Who opened their homes to us in foreign cities and countries, and who shared space and stories.

To the countless contact lenses:
That I lost along the way, stuck to velodromes around the globe, because they never wanted to stay in my eyes during track sessions and races (R.I.P.).

And finally, to the next generation:
Who inspired me to be better, on and off the bike.

As I step into this next chapter, I will hold my cycling community close. Please don't be a stranger!