A month after winning her first World Cup cross-country (XCO) in Brazil, Australian champion Rebecca McConnell (Primaflora Mondraker Genuins) won the first Short Track (XCC) of her career on Friday at Round 2 in Albstadt, Germany. It was the first XCC win ever for an Australian rider. McConnell outsprinted Pauline Ferrand Prevot (BMC MTB Racing), winner of the first round XCC, for the win, although the French rider continues to lead the overall standings. 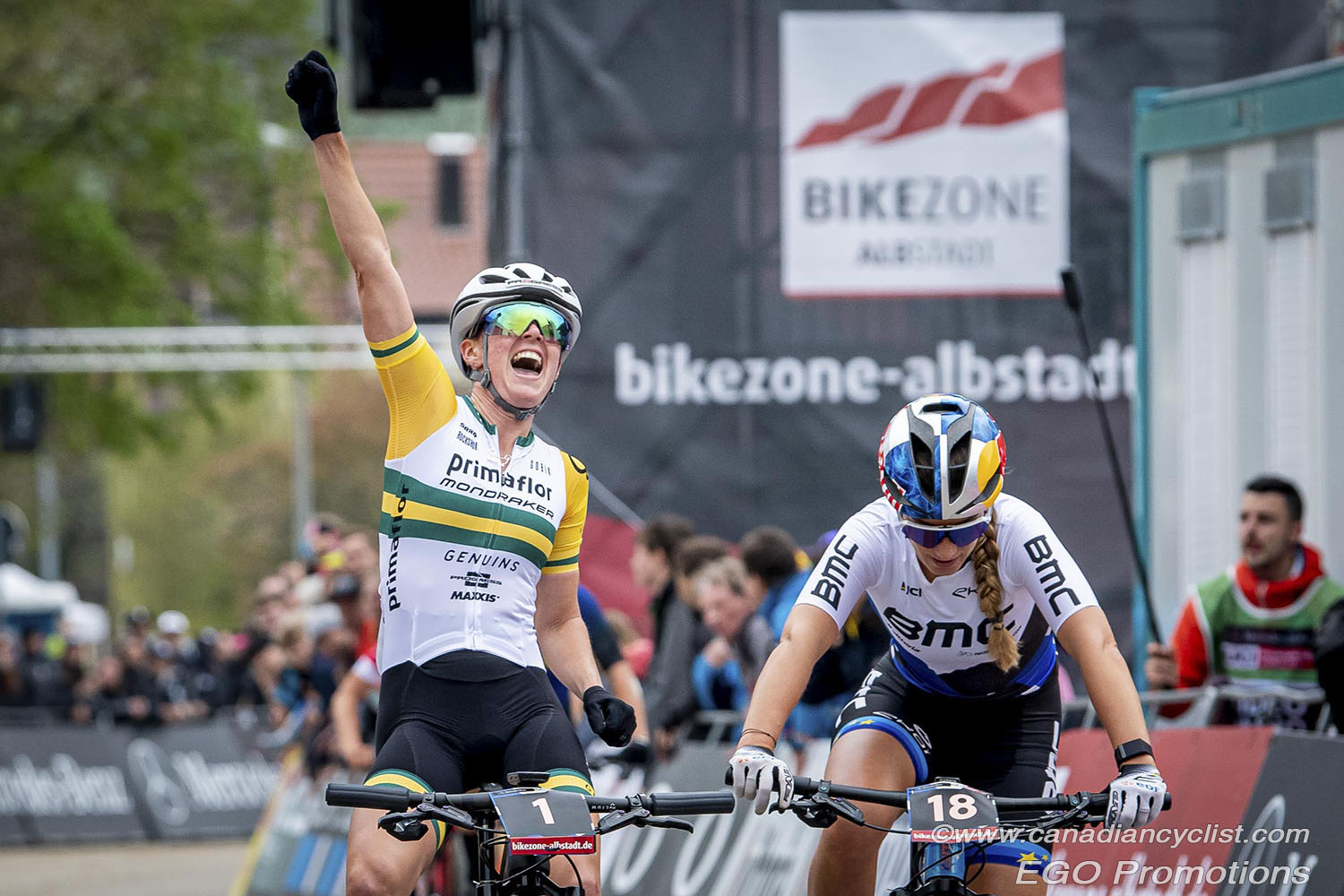 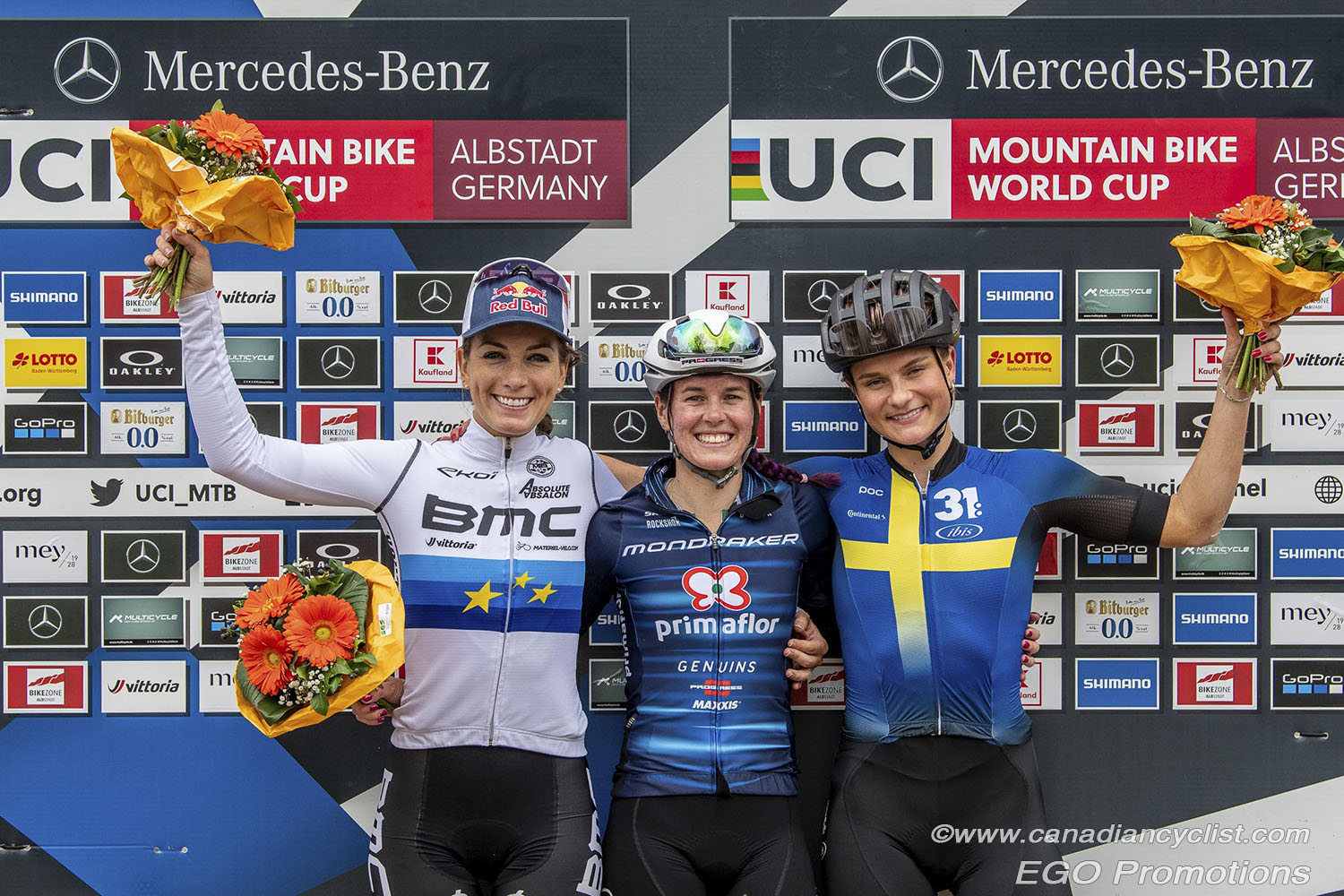 There were two Canadians in the race - Jenn Jackson (Canyon MTB) finished 18th and Canadian XCC champion Sandra Walter (Team Canada) was 32nd. Jackson will get a third row start for Sunday's XCO. For Walter, it was her first World Cup level race of the year.

"It was really cool to be starting in the short track this season," said Jackson. "I've been just outside the bubble for a while, so being able to make good on the opportunity and move up was really cool. Excited to have the third row start Sunday and hopefully use that as a step up for another good race."

"It felt great to represent Canada out there wearing my Canadian Champion's kit for the first time in competition," said Walter. "I was very proud to be wearing it and it definitely made me dig deep, knowing I was wearing the maple leaf. I was happy with how my legs felt in the first half - I think it's a good sign for Sunday's XCO. I struggled a bit in the second half. The pace was just so high and everyone out there is so fast! I'm glad to get the first one in the bag and I'm looking forward to having another go on Sunday."

Rain in the days leading up to the race led to a wet and slippery circuit. Eva Lechner (Trinix Factory) got the holeshot, but the race turned into one of attrition, with different riders taking turns at the front keeping the pace high. 2016 Olympic champion Jenny Rissveds (Team 31 Ibis Cycles) and Alessandra Keller (Thomus Maxon) were both aggressive in the early laps of the seven lap race, with Ferrand Prevot having to work her way back to the front group after missing a pedal at the start.

On the penultimate sixth lap McConnell upped the pace, splitting the field, but Rissveds regained the front as they started the final lap. McConnell and Prevot Ferrand were both able to rejoin her at the front, with McConnell then attacking hard on a long uphill section. Only Ferrand Prevot was able to match her pace and the two came out of the final corner onto the paved finishing straight 1-2, with a gap on the rest of the leaders. Prevot Ferrand was overtaking McConnell, but ran out of course, with Rissveds taking third just ahead of Keller.

Ferrand Prevot continues to lead the XCC overall standings with 450 points, 50 ahead of McConnell.

"That was crazy, I'm definitely not a sprinter," said McConnell. "I don't know where that came from; I didn't even know we had a gap. I felt really good again today. It was a bit frustrating because the bunch was so big and I kept getting stuck [behind other riders]. But I had the legs; when I made the move [on the climb] I didn't know that it had stuck and should have pushed on so I didn't leave it to a sprint. But everything is really coming together and I'm so happy with that."

Ferrand Prevot admitted, "I think I was too confident about beating Rebecca in the sprint and I was a bit short. I tried to clip in at the start and [missed my pedal], so I was close to the last one at the beginning of the race, and I had to come back. When I got [to the front] I just tried to stay on wheels and recover. I think I should have passed [McConnell] before the last corner, but I'm still happy with second place."