Rebecca McConnell (Primaflora Mondraker Genuins) became only the fifth woman ever to have a perfect World Cup weekend on Sunday - winning the cross-country (XCO) after a victory in the Short Track (XCC) on Friday. McConnell dominated Round 2 of the XCO in Albstadt, Germany, for her second straight World Cup win, solidifying her lead in the overall standings. 2016 Olympic champion Jenny Rissveds (Team 31 Ibis Cycles) took second, the only rider to finish within a minute of the Australian champion. 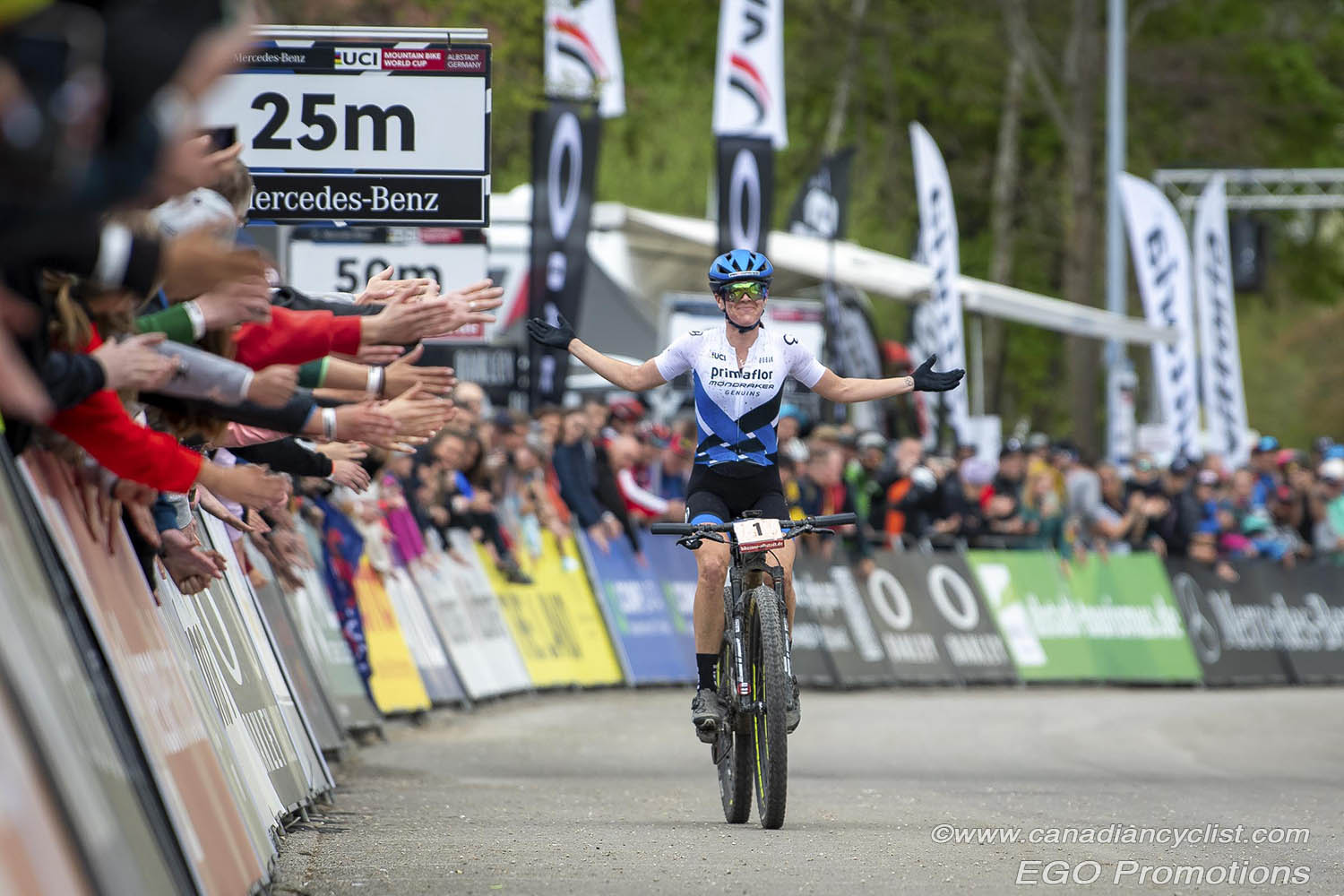 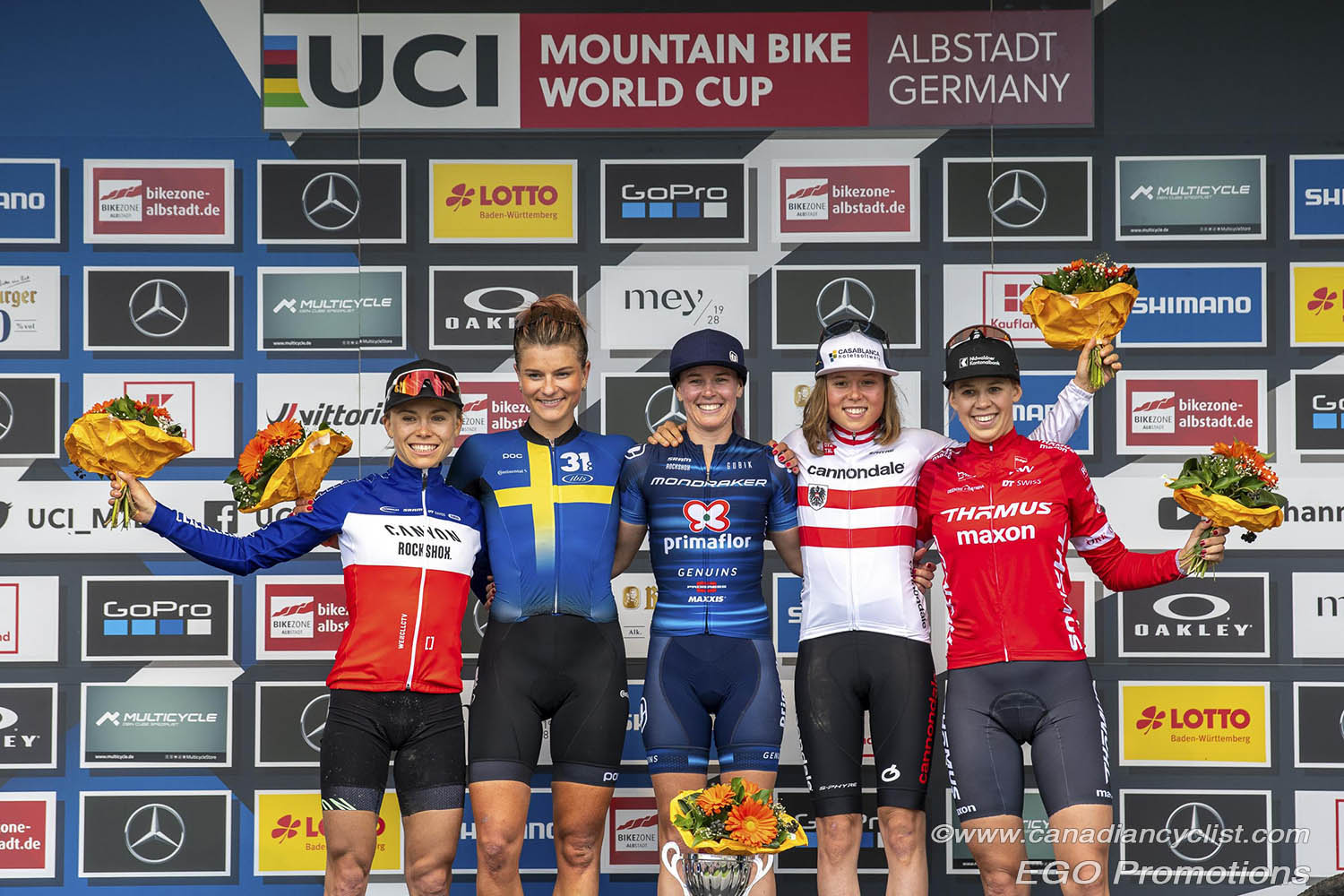 Canadian XCO champion Jenn Jackson (Canyon MTB) had a strong start, riding in the top-20 for the first half of the race. She faded to the mid-20s in the second half of the race, finishing just outside of the top-25, in 26th. Sandra Walter (Liv Racing Collective), starting in the eighth row, consistently rode her way up through the field to finish 30th. Emily Batty (Canyon MTB), also starting well back after missing the first round, managed to make her way up to 43rd. Other Canadian results were Haley Smith (Maxxis Factory) in 59th, Laurie Arseneault (Canyon MTB) in 63rd, Mackenzie Myatt (Team Canada) in 70th, Cindy Montambault (Equipe Quebec) in 72nd and Dana Gilligan (Team Canada) in 73rd. Maghalie Rochette (Specialized) did not finish - see our separate news item,  Rochette to Take a Break

"All in all, it was a good ride and result," said Jackson, "but I some really dark times Lap 4/5 which kind of put a shadow over things. I'm a bit disappointed, to be honest ... top 20 was within reach, I think I have the pieces but just need to play them a bit better next time! Felt like I was missing the lightness and technical touch on the bike today, but overall riding well, the whole team setup has been so positive, and I'm just really enjoying being here racing bikes right now." 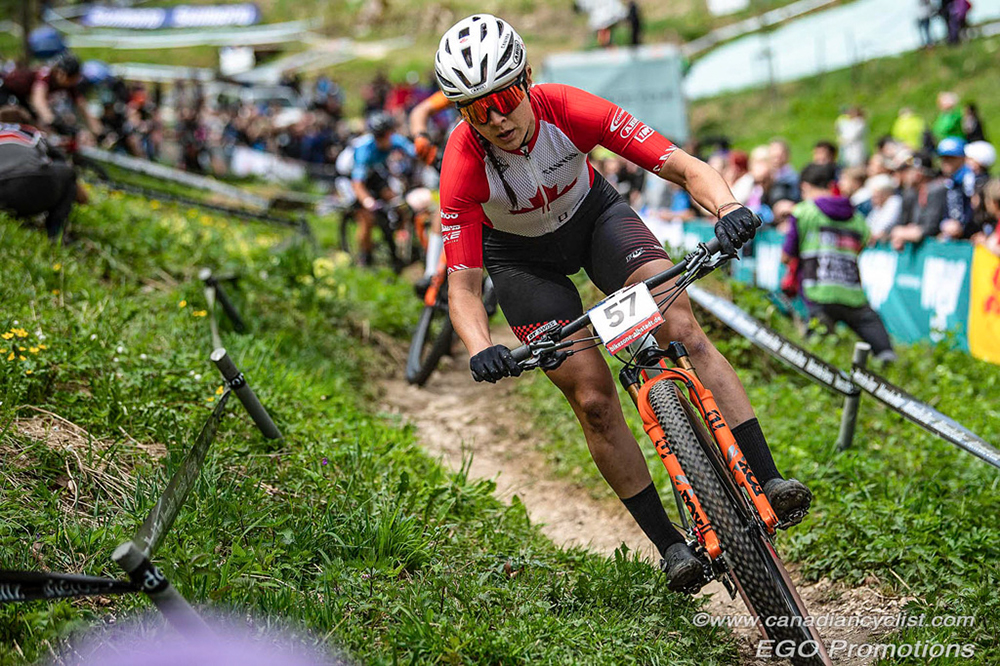 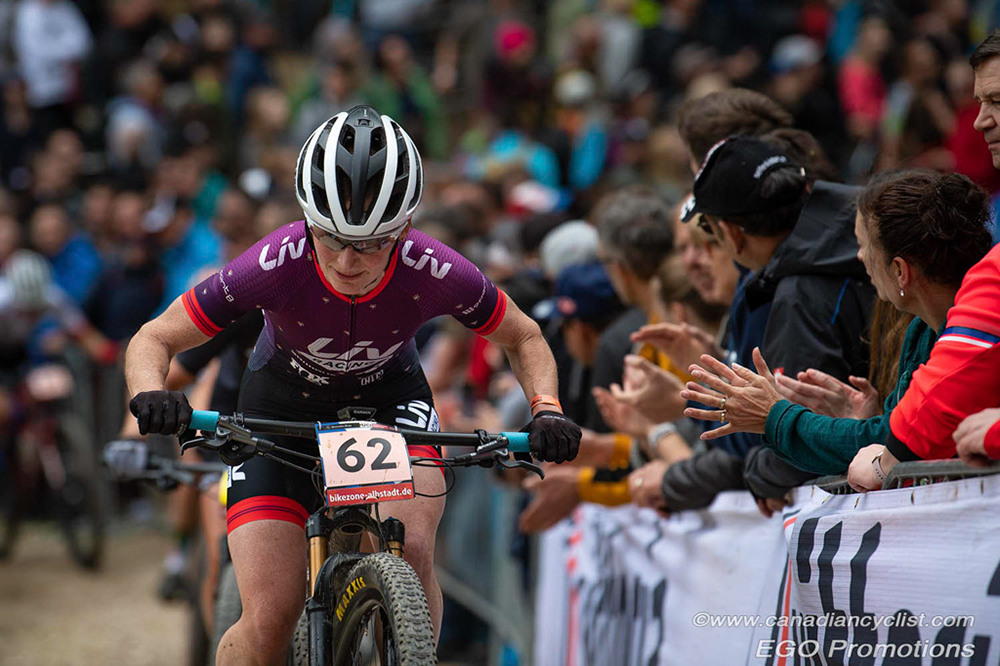 "I'm really pleased with my ride," said Sandra Walter. "The first World Cup of the season (for me) is always an unknown. With such a big, strong field, I had no idea what to expect, so I didn't set a result based goal for myself. I just wanted to feel strong, ride well, fight hard and have some good battles out there, no matter where I was. I achieved all of those things and squeaked into the top 30 at that, so I'm pretty happy right now. It was great to have so many people cheering out there and my good friend, Paul, doing my race support."

The Albstadt circuit is unrelenting, with long steep climbs and technical descents. There is nowhere to hide, and when McConnell attacked on the start lap, only Rissveds was able to respond. By the mid-point of the first of five full laps, the pair had over 30 seconds on a chase group of eight, which included last year's Albstadt winner Loana Lecomte (Canyon CLLCTV), Alessandra Keller (Thomus Maxon), current Olympic champion Jolanda Neff (Trek Factory) and XCC World Cup leader Pauline Ferrand Prevot (BMC MTB).

The leaders would ride together steadily over the next few laps while the chase whittled down to Lecomte, Ferrand Prevot, Keller and Mona Mitterwallner (Cannondale Factory), the Under-23 rider who is riding up a category. Ferrand Prevot would fade in the last two laps to finish seventh, while Mitterwallner dropped Lecomte on the last lap to take third.

Rissveds tried an attack on one of the climbs on Lap 3, but McConnell quickly responded, and then the Australian launched her own attack the next lap and her Swedish rival had no answer. McConnell's fourth lap split matched the fastest lap of the race (Rissveds in Lap 1), and the World Cup leader put in another sub-14 minute lap for the fifth and final circuit, eventually pulling away to win by 48 seconds.

McConnell has now opened a commanding lead in the overall World Cup standings after two rounds with 620 points. Anne Terpstra (Ghost Factory) is a distant second at 373 points, with Mitterwallner jumping to third from fifth, a further 16 points back. Jackson jumps from 27th to 22nd in the standings, while Walter debuts in 43rd place. Arseneault drops to 47th from 32nd after getting no points in Albstadt.

"Jenny and I have very different strengths," explained MConnell, "so she can play games a bit more and I need a consistent speed throughout the race. I knew she was playing with me, so I was just trying to be patient, but after [the start of Lap 4] I knew I had to give it a shot. When I made my move, I was able to make it stick."

"It's just incredible ... there's no words for this. Today the plan was just enjoy every moment for today ... whether it went really bad or really good. Just enjoy this moment wearing the leader's jersey with Number 1 on the front of the bike. The goal remains the same - race well, no expectations."